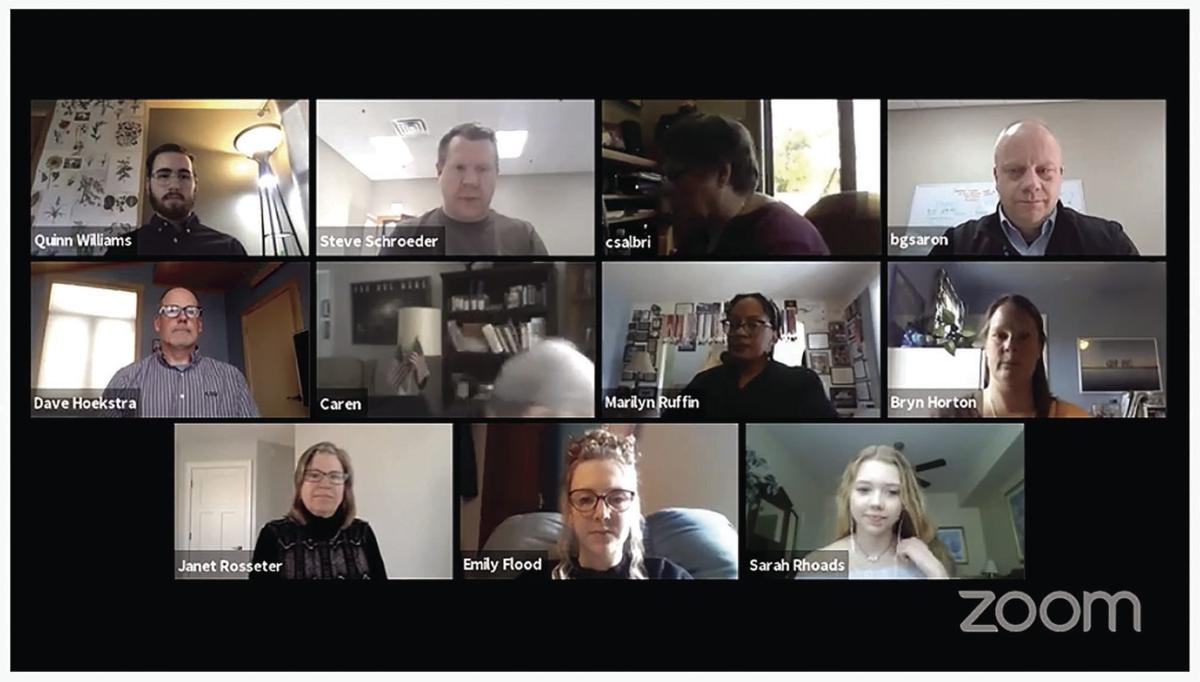 Members of the Sun Prairie School Board, including new student member Sarah Rhoads, participated in the first virtual meeting via Zoom. The meeting was broadcast live on YouTube but had to be recessed once after 90 minutes so a new recording could begin and continue the meeting due to its length.

In projections prepared before the COVID-19 pandemic shut down Sun Prairie Area School District facilities, the district’s school-purpose mill rate is projected to fall by 3.5 percent with a 3.75 percent tax levy increase in 2020-21. However, the SPASD is expecting savings in several areas of this year’s budget, including athletics, busing and utilities.

Members of the Sun Prairie School Board, including new student member Sarah Rhoads, participated in the first virtual meeting via Zoom. The meeting was broadcast live on YouTube but had to be recessed once after 90 minutes so a new recording could begin and continue the meeting due to its length.

In projections prepared before the COVID-19 pandemic shut down Sun Prairie Area School District facilities, the district’s school-purpose mill rate is projected to fall by 3.5 percent with a 3.75 percent tax levy increase in 2020-21. However, the SPASD is expecting savings in several areas of this year’s budget, including athletics, busing and utilities.

During the same meeting it postponed a budget forecast and reallocation of conserved funds, members of the Sun Prairie School Board on April 13 voted to approve a new administration compensation plan.

The proposal brought sharp criticism from a longtime board watchdog, who cited the coronavirus pandemic and its associated economic havoc as reasons why the plan should not be approved at this time.

According to a report provided to the board and made available to the public, the administrator compensation framework resulted from collaborative work which began over two years ago between district administration, site administrators, and School Board members.

Another goal was to update the Increased Professional Qualifications (IPQs) language and definitions specifically focusing more on degrees and certifications than on individual graduate credits and also placing a career limit on accessing IPQs rather than an annual limit without a career limit.

According to the report to the board, the financial impact of the Administrator Compensation Framework is focused on the Cost of Living (as in the past) and will be dependent on administrators attaining the remaining components of the plan (evaluation, scorecard, and community engagement).

The initial cost of the refined IPQ language would be approximately $57,000 based on honoring the current level of graduate degrees in our administrator group. There will be subsequent annual costs based on administrators completing graduate level degrees; however, due to the career limit these costs will be sustainable and predictable. The plan was created to balance the goals of recruitment and retention with fiscal sustainability.

Although the report referenced working with a team for two years, Sun Prairie School Board President Steve Schroeder said the new compensation framework discussions began longer ago than that — in 2016.

“The other thing I would say about this compensation plan is it’s really really different,” Schroeder told the board.

Schroeder said the district has totally redone the compensation plan for teachers, administrative support and support staff to make changes, but has not touched administrators.

“Hopefully this will rectify some discrepancies,” Schroeder said, adding that the new plan will pay female administrators the same as their male counterparts.

“In these once-in-a-lifetime difficult and trying financial times when many of our residents are being laid off, experiencing reduced hours or salary cuts, and the national and local economy is in free-fall, the Sun Prairie School District Administrator Compensation Committee, made up of eight administrators and School Board members, Steve Schroeder and Tom Weber, is recommending salary and benefit increases for district administrators,” Fetterly wrote.

“The Administrator Compensation Committee needs to be informed that quality of life in our community is enriched by members of our community service and veterans organizations who volunteer their time and money for the greater good and do not seek or expect any compensation,” Fetterly added.

Fetterly pointed out The Compensation Committee’s recommendation clashes with another item on the School Board meeting agenda which forecasts school district budget deficits every year for the next 5 years, reaching a negative $2.6 million in the fifth year.

“This is all the result of the School Board and administration’s failure to exercise its fiduciary responsibilities to the taxpayers,” Fetterly wrote.

Board members disagreed with Fetterly’s assessment.

School Board Vice President Tom Weber said he thought that even though the plan was not agreed upon by all involved, that he believed it will help to drive economic recovery in the current times.

Weber also said the board’s decision making is not driven by finances, but instead by providing quality education to Sun Prairie children.

“I think the plan is a good plan,” remarked board member Caren Diedrich, who also disagreed with some of Fetterly’s statements.

Hoekstra said he believed the plan was a small step towards using the same model for other performance-based increases. Both Schroeder and Horton agreed with Weber’s comments.

Board Clerk Carol Sue Albright said she agreed with the plan, but opposed any type of merit-based pay.

The board approved the plan unanimously.

Later during the meeting, the board agreed to delay discussion of the budget planning timeline, citing the COVID-19 pandemic. But Phil Frei, Director of Business & Finance for the Sun Prairie Area School District, said there should be some savings in utilities, substitute teacher costs, busing and athletics.

Frei also said the district is tracking any coronavirus-related equipment purchases and plans to seek reimbursement for those if state or federal assistance becomes available for that purpose.

Some inputs used in the budget planning forecast for the 2020-21 school year included:

• Salary and benefits for new staff based on the projected enrollment increases for the next five years (3.0 FTE in Special Education or $240,000).

According to a report to the board from Frei, the SPASD’s general fund balance (Fund 10) is among the lowest percent of comparable districts. The fund balance as of June 30, 2019 was $15,506,056, or about 14.5% of the general fund. Frei said that while this has been routinely done in mid-April in past years, it could wait until June. The board voted to table the item until a June board meeting.