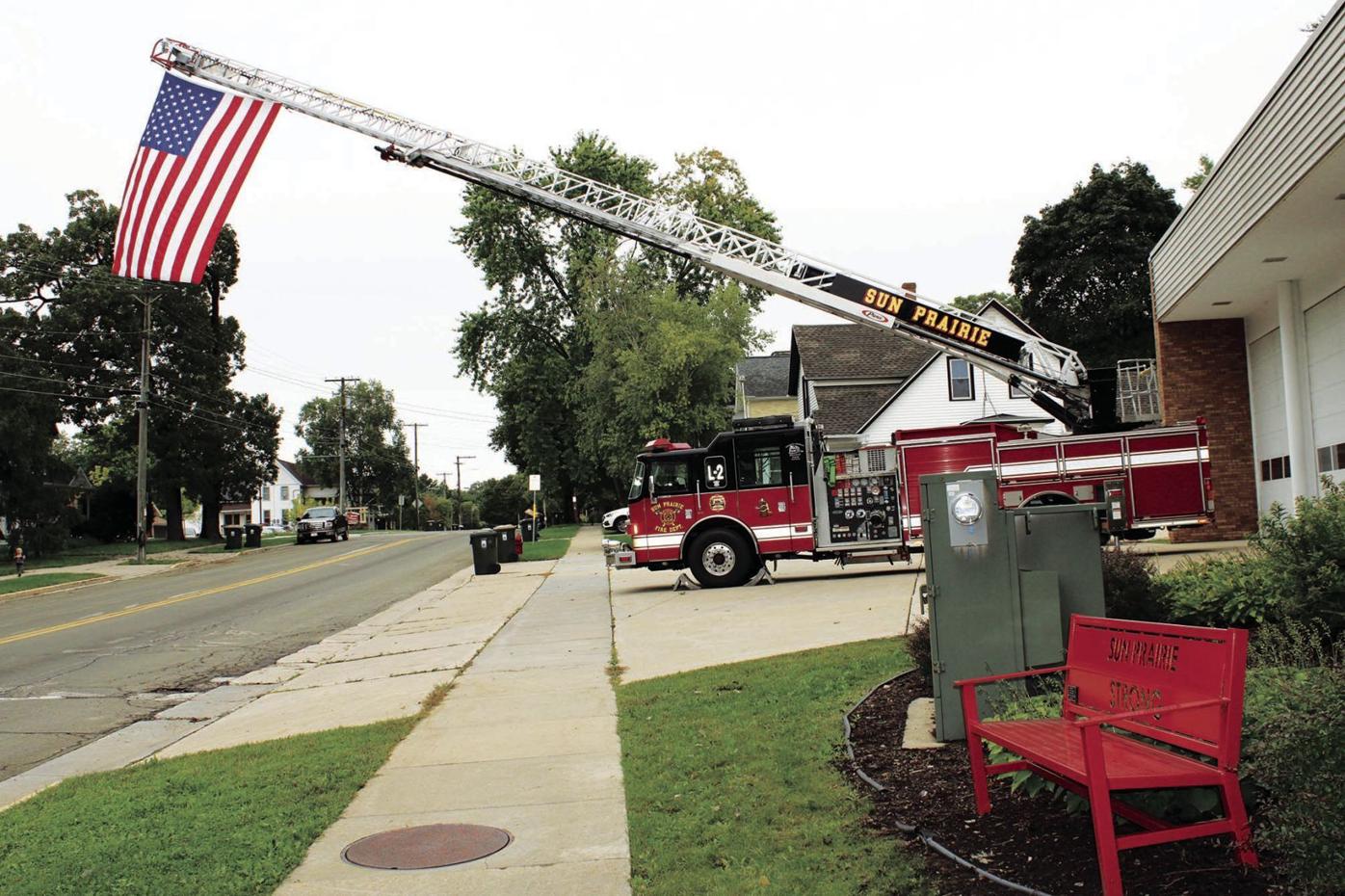 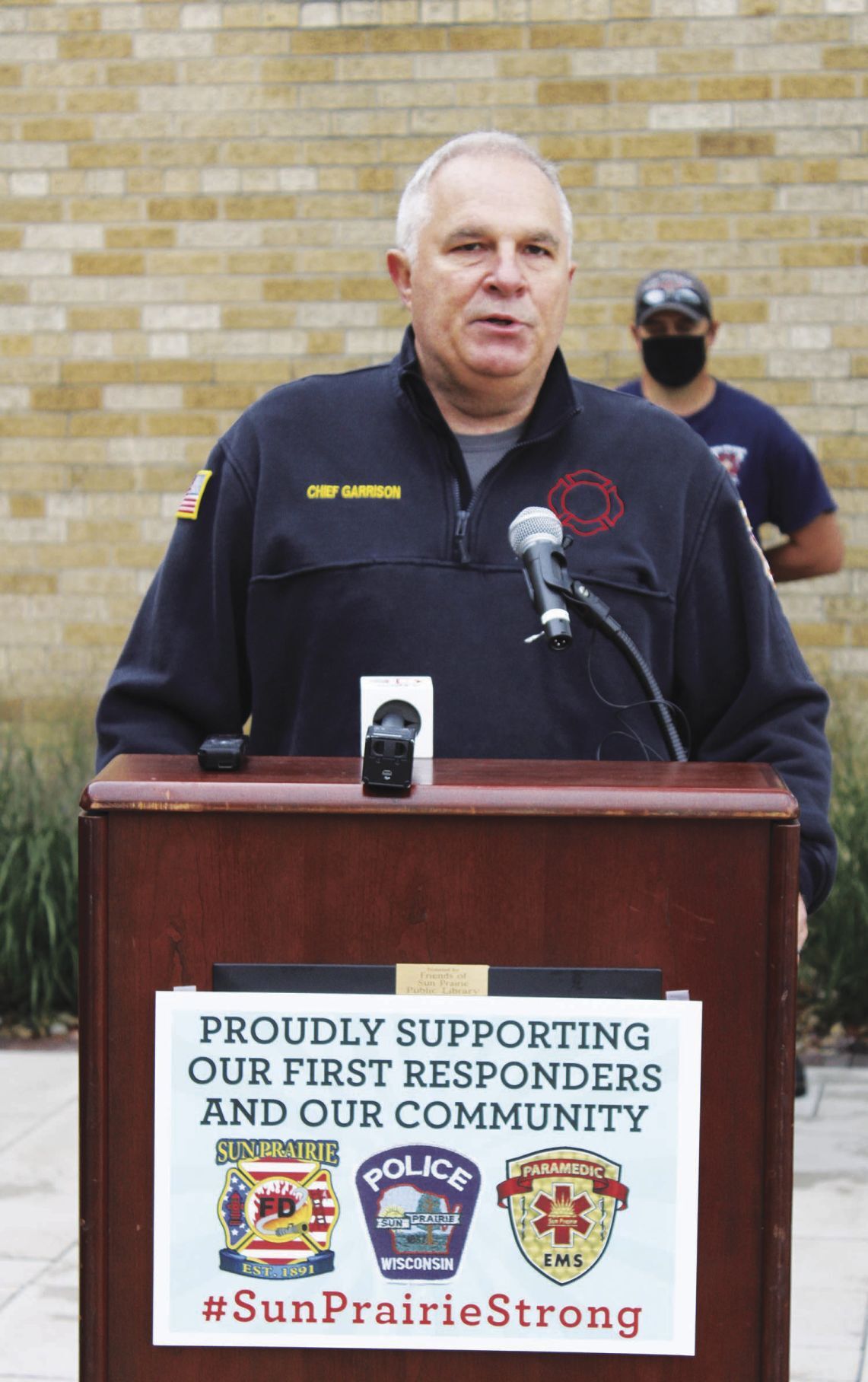 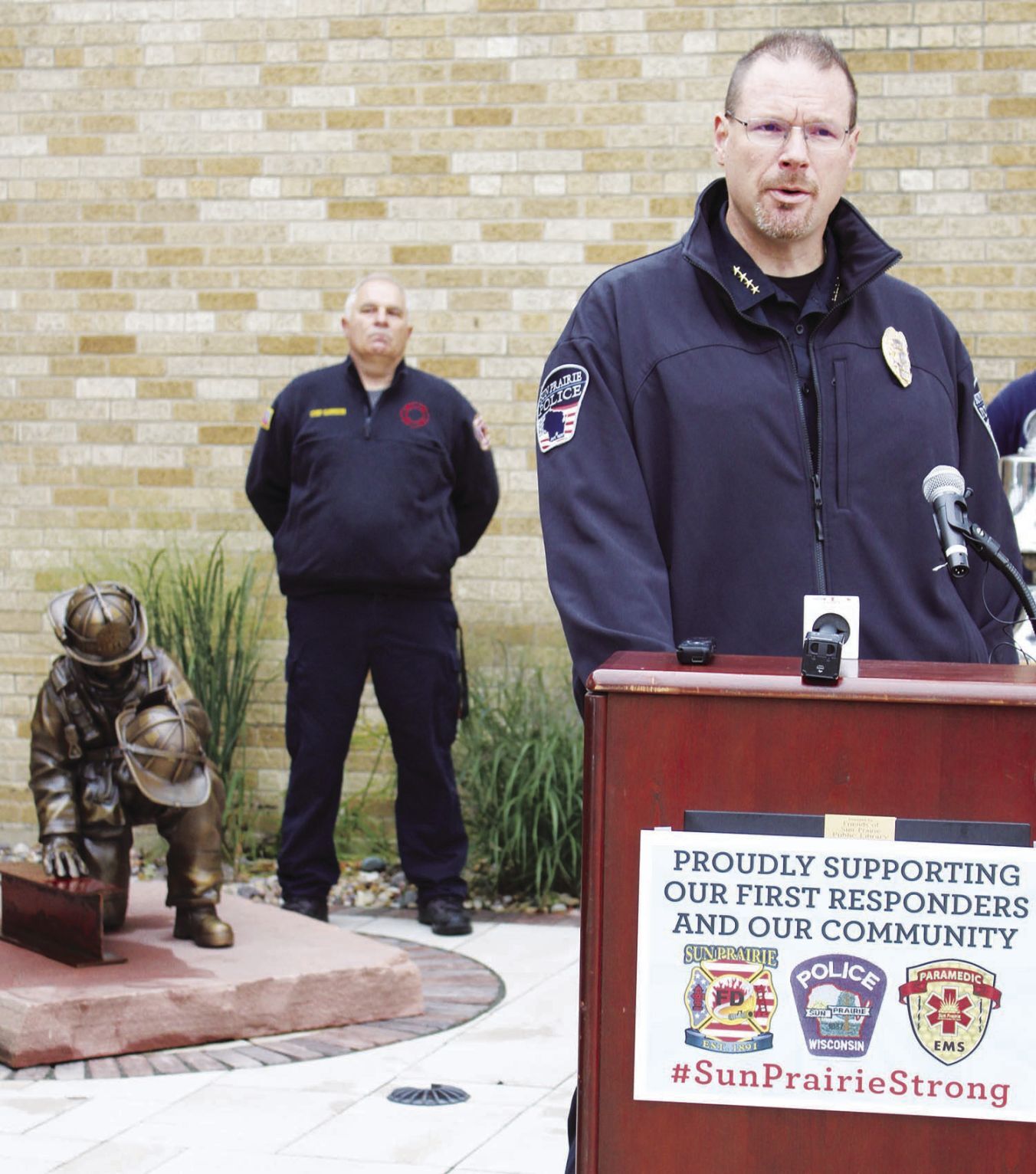 Sun Prairie Police Chief Mike Steffes (with Fire Chief Chris Garrison at left) was among the 9/11 Ceremony speakers near the Cory Barr Memorial in downtown Sun Prairie on Friday, Sept. 11, 2020. 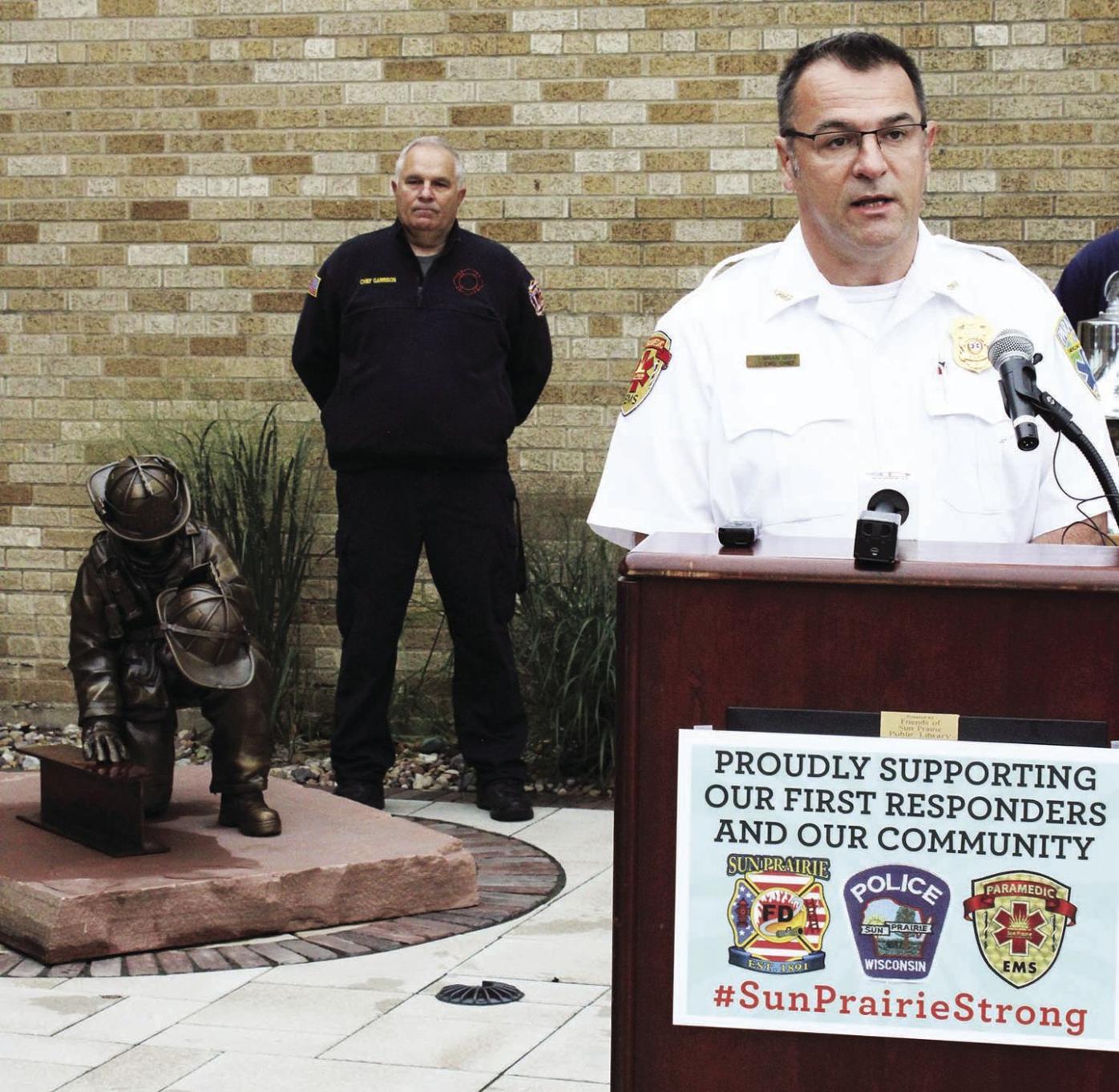 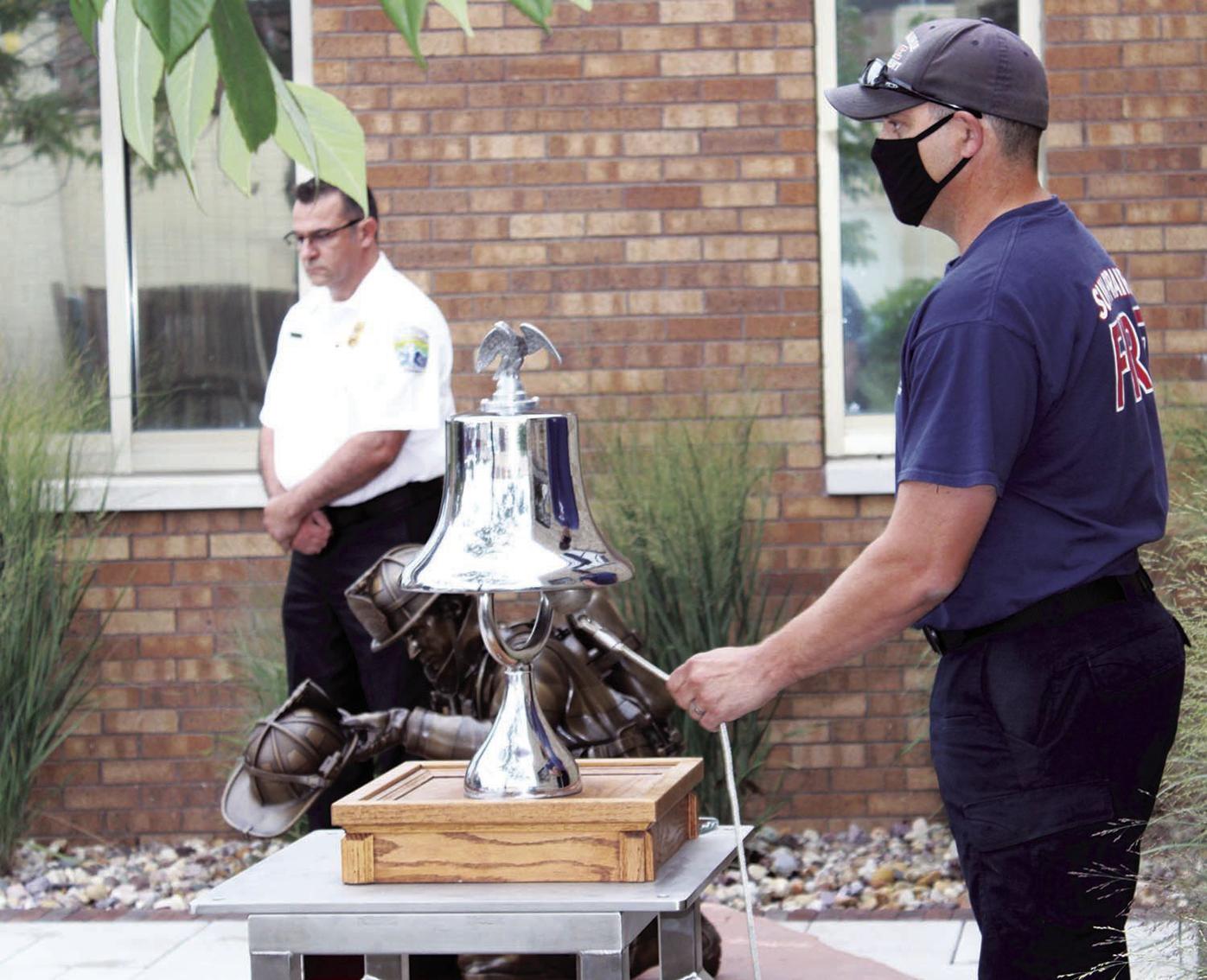 Sun Prairie Police Chief Mike Steffes (with Fire Chief Chris Garrison at left) was among the 9/11 Ceremony speakers near the Cory Barr Memorial in downtown Sun Prairie on Friday, Sept. 11, 2020.

During a roughly 9-minute ceremony on Friday, Sept. 11, all three Sun Prairie Emergency Services chiefs called for the community to remember the sense of unity and support for first responders engendered after the attacks of Sept. 11, 2001.

Taking place downtown near the Cory Barr Memorial Statue just outside of Fire Station #1 at 135 N. Bristol St., the ceremony was live-streamed on the Sun Prairie Fire Department’s Facebook page.

The ceremony began just before 7:46 a.m., when a jet airliner hijacked by Al Qaida Islamic militants crashed into the north tower of the World Trade Center. That crash was followed by crashes of jet airliners into the South Tower of the World Trade Center, the Pentagon and Shanksville, Pa., resulting in the deaths of nearly 3,000 citizens as well as police, firefighters, and Port Authority officers.

“This is a day that we dealt with 19 years ago, and it’s kind of funny to sit here and think that even some of my new firefighters that I have here today, weren’t even around on that tragic day that we dealt with and they don’t understand the complete meaning of that day,” remarked Sun Prairie Fire Chief Chris Garrison, who is also the president of the Wisconsin State Fire Chiefs Association. “And I think it’s something that all of us in public safety need to remember and pass on how we felt that horrible day. So I’d like to start out by first honoring our country and honoring what we do.”

After leading the Pledge of Allegiance, Garrison narrowed the focus of his comments.

“This day in our history is very important to us in the fire service. It was the most tragic day on American soil and to my most tragic day, ever, numerous firefighters, police officers, and public safety personnel and EMS personnel lost their lives on that tragic day,” Garrison said.

“We think of those firefighters and EMS workers and police workers from New York. But we also remember the people that we’ve lost in the fire service in police work. And in EMS, we think about Cory Barr on this day, we’re here honoring at this statue,” Garrison said.

“And one thing that I ask is that we couldn’t have hundreds of people here like we usually have, but I asked that if you get an opportunity throughout the day, we’d be honored if you’d come and maybe take a minute by the statue, leave a flower, a note, have your child color a picture and drop it off. Just to remember what happened that tragic day,” Garrisons aid.

Police Chief Mike Steffes recalled the sense of unity and support for first responders that occurred after the Sept. 11, 2001 attacks.

“Today, we honor the courage of those that put themselves in harm’s way to save people that they didn’t know, the citizens that also say to people that they had no idea who they were that day in New York,” Steffes said.

“I’m proud and honored to gather today to remember and honor the victims, the survivors, the family members, and our current police, firefighters and paramedics — this day unified our country 19 years ago. I think that’s important every year annually, that we recognize that, and that we continue to unify our country through a horrible, horrible, and tragic event like this,” Steffes said.

“I have the luxury of a front row seat to the amazing work that our officers, our paramedics and our firefighters do every single day to protect our public, to keep everybody safe and healthy. I’m humbled to be a part of this amazing team,” Steffes said.

“Thank you to our community for joining us on this virtual event today, to preserve and recognize the memory of those that lost their lives and were impacted by the horrible events on September 11th, 2001,” Steffes concluded. “Let us never forget.”

“Nineteen years ago today marks the date that our country suffered an unimaginable tragedy and public safety professionals were called to perform duties that they had not ever imagined that they could do,” Goff said.

“Since that event, many thousands of people gave their lives civilians and public safety professionals alike and in the aftermath of that communities and the nation united,” Goff said. “And we banded together to form solidarity and learn from the event, and apply lessons that we carry forward today.

Before the Fire Department tradition of ringing the fire bell three times thrice to mark the end of a shift or a firefighter’s death, Garrison’s final remarks called for reflection and unity.

“Let’s not wait for another American tragedy to reunite this country,” Garrison said. “There’s a lot of issues going on in our country right now, and it’s time for all of us to step up, do the right things and reunite as a country.”