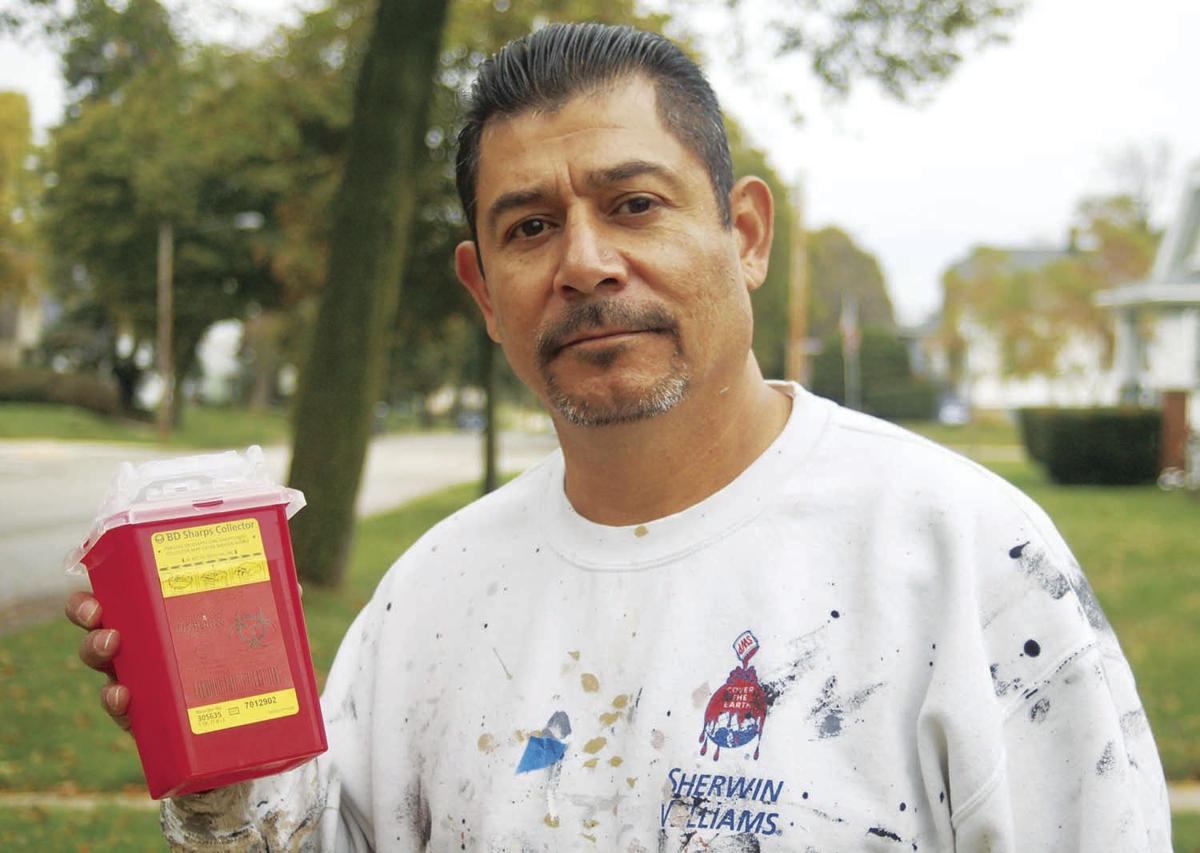 Rafael Mercado, founder of Team HAVOC, holds a container of needles collected during a cleanup on the South Side. His group conducts needle cleanups and trains people to administer Narcan, a drug used to reverse the effects of opioid overdoses. 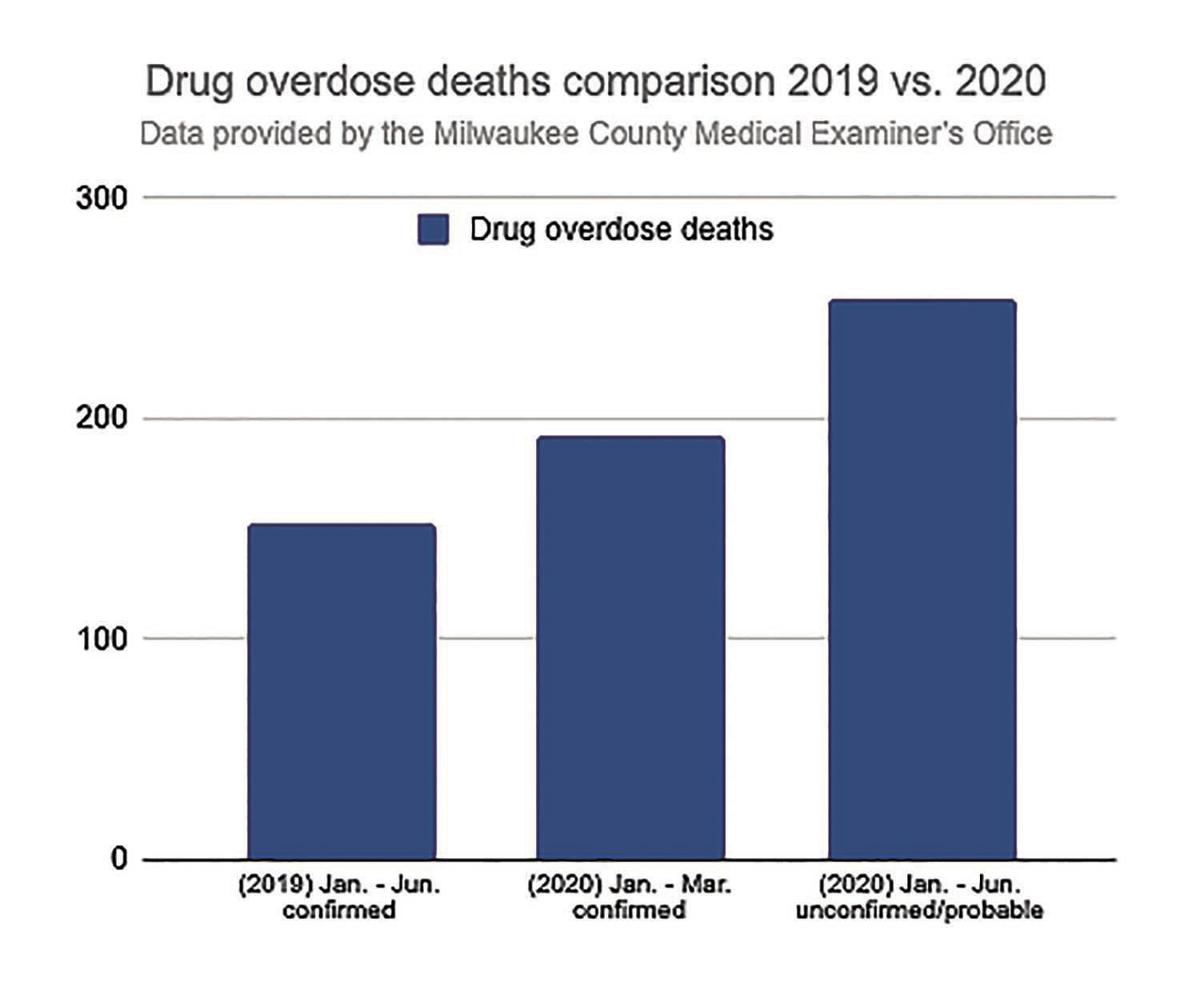 The chart from the Milwaukee County Medial Examiner’s Office shows a large increase in drug overdose deaths when compared to the same time period last year. 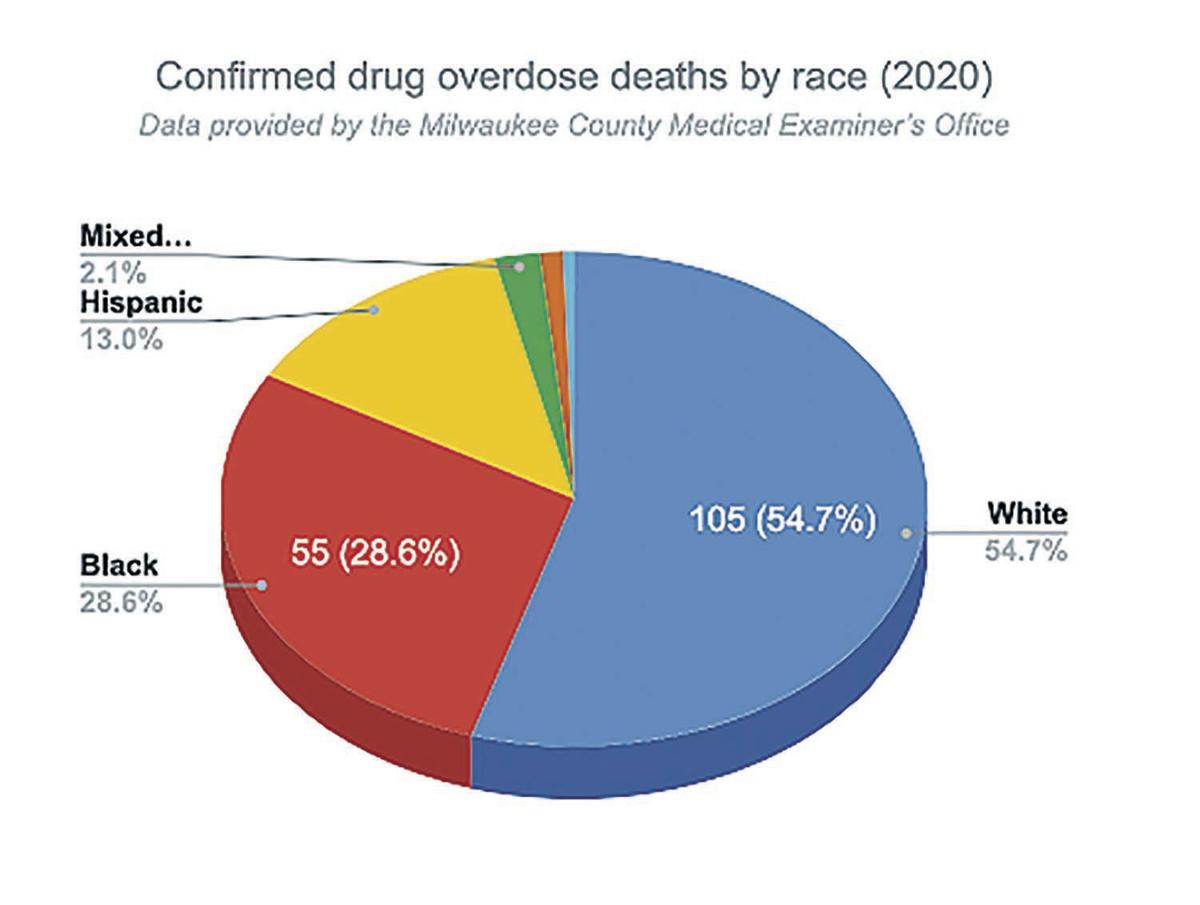 The pie chart shows that white individuals made up nearly 55 percent of drug overdoses in Milwaukee County to date in 2020, followed by Black individuals (nearly 29 percent) and Hispanic (13 percent).

Rafael Mercado, founder of Team HAVOC, holds a container of needles collected during a cleanup on the South Side. His group conducts needle cleanups and trains people to administer Narcan, a drug used to reverse the effects of opioid overdoses.

The chart from the Milwaukee County Medial Examiner’s Office shows a large increase in drug overdose deaths when compared to the same time period last year.

The pie chart shows that white individuals made up nearly 55 percent of drug overdoses in Milwaukee County to date in 2020, followed by Black individuals (nearly 29 percent) and Hispanic (13 percent).

The first drug overdose victim in May was just 21 years old.

A mixed-race woman, she died from a combination of fentanyl, a synthetic opioid; tramadol, a painkiller; and the designer drug Flualprazolam.

Over the course of the next six days, there would be 16 more cases similar to hers: People found dead or dying in locales across the city — the faces of a drug overdose tally on pace to shatter last year’s record high of 418 in Milwaukee County.

According to data provided on June 11 by the Milwaukee County Medical Examiner’s Office, there were 192 confirmed drug overdose deaths from Jan. 1 to March 19, with 62 more probable cases pending toxicology tests. The office recorded 153 overdose deaths through June 11 of last year.

The trend is not limited to Milwaukee as the pandemic continues. The Appleton Police Department last week reported a “major increase in overdose deaths” over the previous two months, and Kenosha County is grappling with a similar trend, according to the Kenosha News.

Milwaukee County’s victims this year have been diverse: 105 were white, 55 Black, 25 Hispanic, four mixed-race, two Native American and one Asian American. Opioids contributed to 80% of deaths, and 68% were tied to fentanyl.

The victims lived in all reaches of the city.

The pace of deaths has been disturbingly steady: 39 in January, 45 in February, 40 each in March and April, and 28 deaths through May 19. Milwaukee’s hotspot continues to be the city’s South Side, with 39 fatal overdoses occurring in two area ZIP codes.

The South Side has long been a haven for drug activity, said Rafael Mercado, founder of Team HAVOC, a group that conducts needle cleanups and trains people to administer Narcan, a drug used to reverse the effects of opioid overdoses.

“Many in the community stay blind and hush about what goes on out of fear of arrest by ICE or of retaliation by those using and/or selling the substances,” said Mercado, who also co-founded MKE Heroin Diaries, a Facebook page devoted to increasing awareness and providing resources about opioids.

When a pandemic and epidemic collide

The pandemic has left many who struggle with substance abuse out of work, with limited resources and hope, effectively creating roadblocks to recovery, said Michelle Jaskulski, senior director of faith and family programs for the Washington, D.C.-based Addiction Policy Forum.

“Unemployment, having constant stress and triggers while not being able to access group meetings or counseling have come together like the perfect storm,” said Jaskulski, who became involved in the movement after her two sons struggled with addiction.

The Addiction Policy Forum recently conducted a national pilot study to gauge the impact of COVID-19 on individuals with substance-use disorder. It found that more than one-third experienced disruptions to treatment or recovery services, and 4% reported that an overdose had occurred since the beginning of the pandemic. Some 20% of respondents reported increased substance use.

Locally, Mercado said he’s seen an uptick in families who have reached out to ask about signs of substance abuse and with questions about Narcan.

“The added stress of parenting, behavioral health issues and other underlying factors have created a need for one to use illicit substances as a temporary reprieve from it all,” he said.

The impact of the coronavirus on the ongoing drug crisis prompted U.S. Sen. Tammy Baldwin, a Democrat, to help lead an effort to request federal funds aimed at preventing the addiction crisis from worsening.

Some additional help to address the epidemic in Milwaukee is on the way.

Coupled with a previous grant from the association, it increased the total amount of funds to $1.35 million. Some of those funds will support an expansion of the Milwaukee Overdose Response Initiative, a pilot program originally launched on the South Side.

The program, a collaboration between the health department, the Milwaukee Fire Department and other community partners, involves having peer counselors ride with paramedics six days a week to talk to people who overdosed but were resuscitated, said Alderman Michael Murphy, who co-sponsored the program.

“This positive development is needed to further combat the devastation that the opioid epidemic has caused to Milwaukee communities,” Murphy said in a statement.

With no end to the pandemic in sight, help can’t come soon enough for the growing number of active users, said Jaskulski, whose organization created a free app to support people in recovery during COVID-19.

“The pandemic and the epidemic are kind of feeding into each other, and creating a vicious cycle of addiction and death,” she said. “This is a desperate time, and many communities are at risk.”

If you or a loved one are suffering from addiction, 2-1-1 runs a Wisconsin Addiction Recovery Helpline, supported by the state Department of Health Services. The helpline is a free, confidential, statewide resource for finding substance abuse treatment and recovery services.

A version of this story was originally published by the Milwaukee Neighborhood News Service. Jim Malewitz, Wisconsin Watch Investigations Editor, contributed to this report. The nonprofit Wisconsin Watch (wisconsinwatch.org) collaborates with Wisconsin Public Radio, PBS Wisconsin, other news media and the University of Wisconsin-Madison School of Journalism and Mass Communication.