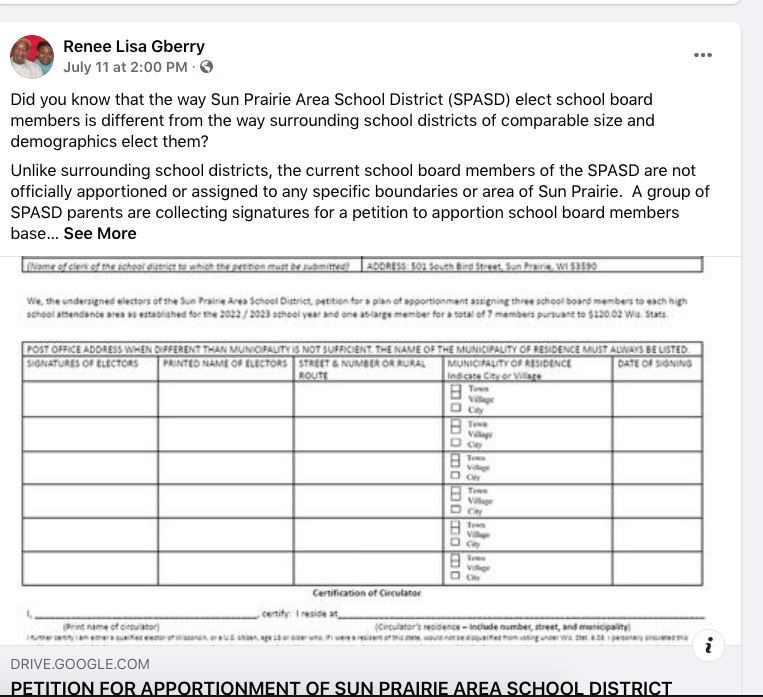 Lisa Goldsberry is a member of a group of Sun Prairie residents leading a petition to change the makeup of the Sun Prairie School Board. Goldsberry is urging residents to sign the petition on her Facebook page, so it can be voted on by electors at the Oct. 3 Annual Meeting.

A group of Sun Prairie Area School District residents are circulating petitions to convert the at-large Sun Prairie School Board to board seats representing the eastern and western parts of the district along with one at-large seat.

Group members Lisa Goldsberry and Tracy Frank have already collected 100 signatures in an effort launched Sunday, July 11, to get the SPASD Annual Electors meeting to consider the change.

The group has until Sept. 3 to submit 500 signatures to Sun Prairie School Board Clerk Carol Albright to get the request on the annual meeting agenda. A simple majority of votes from those in attendance at the annual meeting will be required for the change, according to state law.

Frank said the idea first came to her about two and one-half years ago when three seats were open on the Sun Prairie School Board, with three challengers losing to three incumbents. She recalled the positive energy around some of the candidates “How can the incumbents end up back in . . . and then people were like, ‘well, that’s what people must want’,” Frank speculated.

As a math teacher, Frank said she started to think about vote cancellations and how incumbents were favored as part of the school board election process because their names are known. Frank also said voters who didn’t do research on the candidates may defer to the incumbents.

“So that just got me thinking that I don’t know if this is the best system for voting,” Frank said.

In the year in between the six candidate field and this year, only incumbents ran. Frank said it was discouraging.

“People were really excited, wanted to run and the next year, nobody ran . . . I think people ran this year because there was an actual seat open this year — the two incumbents weren’t running,” Frank said. “You only had one incumbent running, so there was motivation for Marilyn [Ruffin’s] seat or possibly both seats depending on the outcome.”

Frank researched other school districts and learned Madison elects school board members by seat, while DeForest, Waunakee, Verona and Middleton elect with board members representing certain areas of their districts.

“From what I understand this was sort of the method we’re using [in Sun Prairie, where board members are elected at-large] is maybe the default? I guess, I don’t know for sure,” Frank said. “But these other districts have used state statute to change how they vote, or I don’t know how long this has been around.”

Goldsberry also looked at how other school boards were made up.

“Even looking into Madison, there was a segment of the population that wanted to apportion seats,” Goldsberry said. “And the only reason they didn’t do so is because there is a state statute. There is a statute that says, if you have between 150,000 to 500,000 population, that you have to do numbered seats at large. And so the way it’s done in Madison is actually forced by statute. They’re probably the only neighboring city that has not apportioned their seats.”

Frank said having people elected by district will also help to prevent what has been referred to as “block voting.”

“I don’t know what else to call it, but currently we [block] vote. I had a person tell me yesterday . . . ‘you know what I do — I get 50 of my friends together and we block vote. We pick our one candidate that we want and we all vote for that one. We agree to not use the rest of our votes’,” Frank said.

Goldsberry said similar comments have been made on the Sun Prairie Politics Facebook page.

How it would work

Frank said the Sun Prairie School Board will have two districts, each with three seats, with one seat up every year, and an at-large seat, for a total of seven board members.

“So basically anyone can run any year. And then every third year, I mean . . . the petition, doesn’t say this — this would just be what we assume the district would do,” Frank said. “It makes the most sense. And then the at-large seat would come up every third year.”

Frank and Goldsberry also said that signing the petition isn’t enough — SPASD electors will need to show up at the district’s Annual Electors Meeting, set for Oct. 3 at Sun Prairie High School, and vote.

“If nothing else, this is bringing awareness to the voting process,” Frank said. “I don’t know if people are aware that our district does it different than . . . every other Division One district in our county.”

“I guess my spiel or my pitch will be, it’s one thing to sign a petition, but where your voice really counts is at the annual meeting,” Goldsberry said. “So if you really want to see change, show up.”

“And I think going back to the [original intent], we need to set a new standard for how we vote here that’s more equitable, and that is more similar to other districts,” Frank said. “I think it just moves us into the future. I see this affecting possibly 30 years. It’s a big decision, but important.”

“And to be honest, I am a part of most of the Sun Prairie Facebook pages . . . and I hear a lot of complaining about the district,” Goldsberry said. “I am a firm believer in that complaining serves no one, but your action serves everyone. It’s one thing to be on those pages complaining . . . it’s another thing to get out and actually sign petitions and vote.

“If you really are truly wanting to see change,” Goldsberry added, “then you have to make your vote count. And even if you against my preference, I’m happy when I just see people practice their civic duty — I truly win.”

To find out how to sign the petition or learn where in the community district residents are able to sign petitions, send an email to spcollective2020@gmail.com.