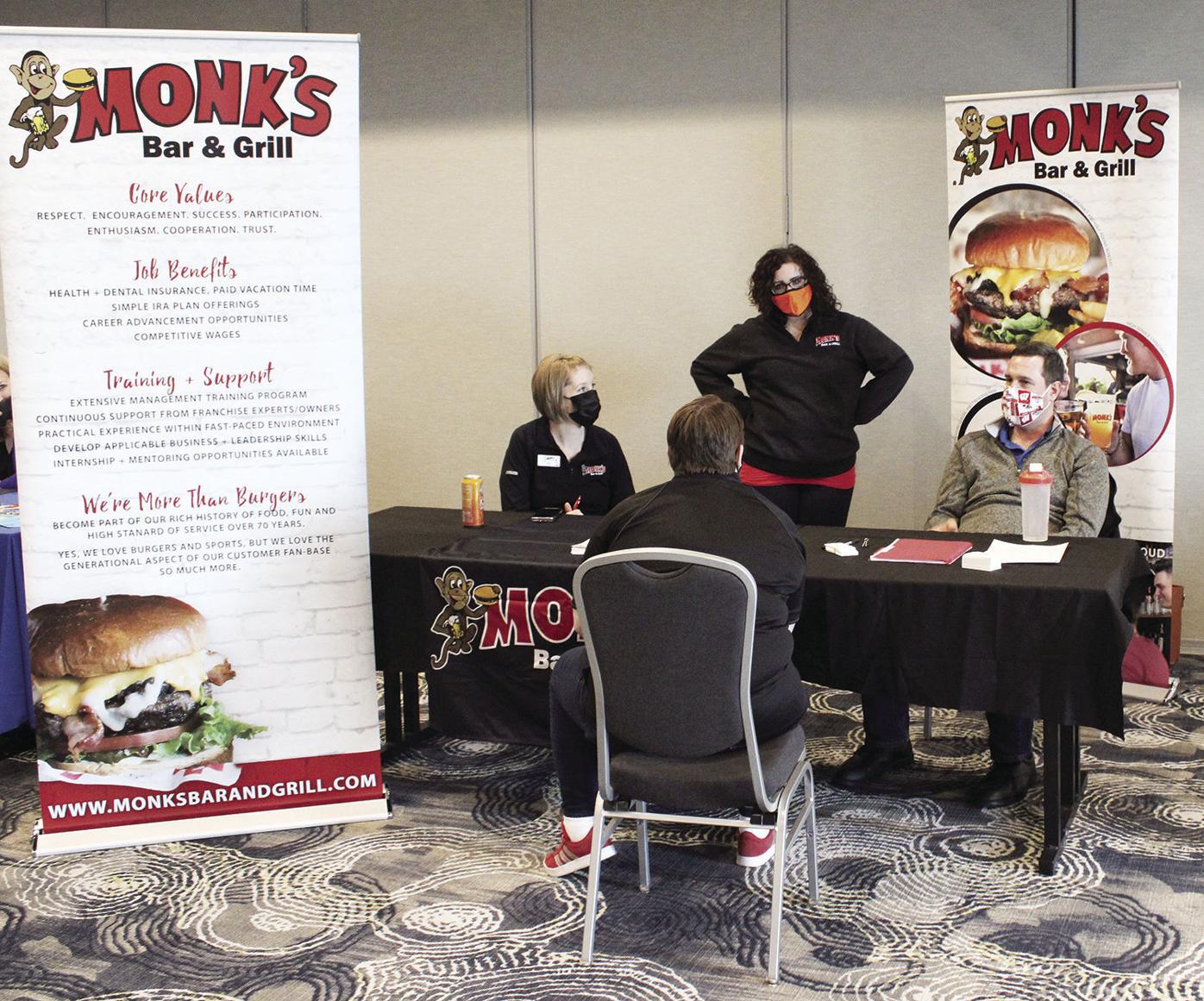 Employees from Monk’s Bar & Grill talked during the Hospitality Job Fair on Tuesday, March 30 at the Sun Prairie Hilton Garden Inn, located at 660 S. Grand Ave. Monk’s was looking to hire as many as 10 people for its three Dane County restaurants in Middleton, Verona and Sun Prairie. 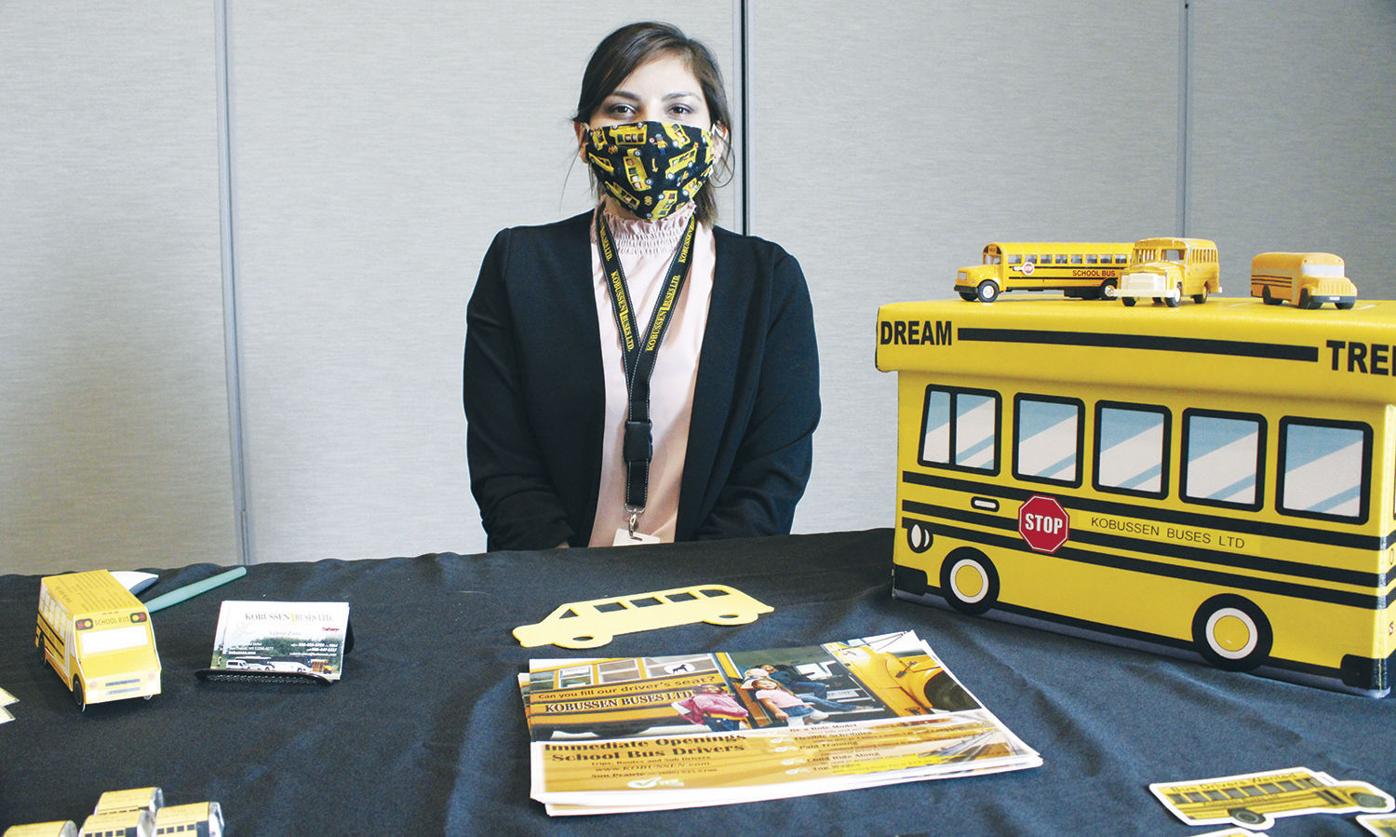 Although not exactly in the hospitality industry, Kobussen Buses Ltd. had a booth at the Hospitality Job Expo on Tuesday, March 30 at the Sun Prairie Hilton Garden Inn. Valerie Zintz (above) said Kobussen offers paid training and flexible hours and hopes to hire 10 drivers and two mechanics.

Employees from Monk’s Bar & Grill talked during the Hospitality Job Fair on Tuesday, March 30 at the Sun Prairie Hilton Garden Inn, located at 660 S. Grand Ave. Monk’s was looking to hire as many as 10 people for its three Dane County restaurants in Middleton, Verona and Sun Prairie.

Although not exactly in the hospitality industry, Kobussen Buses Ltd. had a booth at the Hospitality Job Expo on Tuesday, March 30 at the Sun Prairie Hilton Garden Inn. Valerie Zintz (above) said Kobussen offers paid training and flexible hours and hopes to hire 10 drivers and two mechanics.

What if you had a Hospitality Job Expo and no job applicants showed up?

That didn’t deter the businesses who were at the event from saying they still needed people — anywhere from a couple of people all the way up to 10, in a variety of positions from mechanics (at Kobussen) to management.

“The demand for employees will increase. We’re going to see pay rates go up. People are going to have to pay more and retain more of the employees that they have,” remarked Stacey Riechers, owner of Express Employment Professionals in Madison who attended because some of her company’s openings are in the hospitality field. “We have probably 107 open job orders right now.”

Karen Koleske, representing Firehouse Subs, said the company plans to open one more Madison area location in the next three years and is always looking for more trainees for crew positions to work up to shift managers, assistant general managers and general managers.

Koleske is an embodiment of the promotion practices of Firehouse as a general manager. “I started as a crew member and I’ve been with the company seven years,” said Koleske. “I’m living proof.”

Nitty Gritty is looking for a wide variety of positions for its three Dane County restaurants in Sun Prairie, Middleton and the legacy location near the Kohl Center in downtown Madison, according to Alexa Weber, who spoke for the company at the expo.

“I’m just hoping that it only goes up from here,” Weber said about how much business could come back in 2021. “I can speak for downtown Madison. We just moved up to 50% [restaurant seating capacity] from 25, pretty much since COVID started and it’s just been getting busier and busier. So I’m assuming the same thing here, especially since we have really COVID-friendly policies and we do a really good job of keeping everyone safe and keeping everyone separated. So I think that, yeah, it has brought in a lot of new business and . . . we’ve been doing better and better.”

Both Nitty Gritty and Monk’s, which also has a Sun Prairie restaurant, offer extensive training programs to new employees. “It depends on the person and their experience, but we always try to give adequate training,” remarked John Carmody, general manager at Monk’s in Middleton. “So sometimes it could be as little as three shifts, sometimes it takes longer. For management, we like to have them experience everything in the restaurant as far as training.”

While Monk’s was looking for as many as 10 people in a wide variety of roles for its three Dane County restaurants in Verona, Sun Prairie and Middleton, the Colonial Club was looking for bartenders, security personnel and even wait staff for events at the club in an as-needed role.

“But we can also use supportive home care aides and CNAs,” remarked Melody Riedel, Director of Operations and Services at Colonial Club, which is located on Sun Prairie’s east side and serves all of northeastern Dane County.

Kobussen Buses Ltd. needs drivers and mechanics, according to Valerie Zintz, a recruiter for Kobussen who attended the expo. “We are looking for school bus drivers, school bus monitors and trip drivers, not to do any routes, but just like on nights or weekend trip drivers,” Zintz said.

“We could use two mechanics here in Sun Prairie. And about nine or 10 school bus drivers. I think the need is always going to be there just because we attract a lot of retired people and it’s like perfect for them because it’s early in the morning and they have the whole day off,” Zintz said.

“And then they just have to come back from 2-4 to do afternoon routes,” Zintz added. “But, a lot of people retire then after a certain amount of time. So then new people come in, they go out, you know, it’s always like 10 people leave and then 10 new people come in.”

Unlike some jobs, Kobussen pays for on-the-job training.

“You can have no experience driving a commercial vehicle, but you come in and we have paid training that starts at $11 an hour,” Zintz said. “And then once you have your CDL, it jumps up to $17 an hour. If you have some experience that could be up to $20 an hour that you started.”

“The thing that we’ve learned is to become flexible with our drivers. We’ve got college kids that come and work for us and they will just do a morning route and then go do their classes,” Zintz said. “And that just gives them some steady income that they can do while they’re studying. But, if you just want to do afternoons or just mornings or once one day a week, it’s a great part-time job. We’re super flexible.”