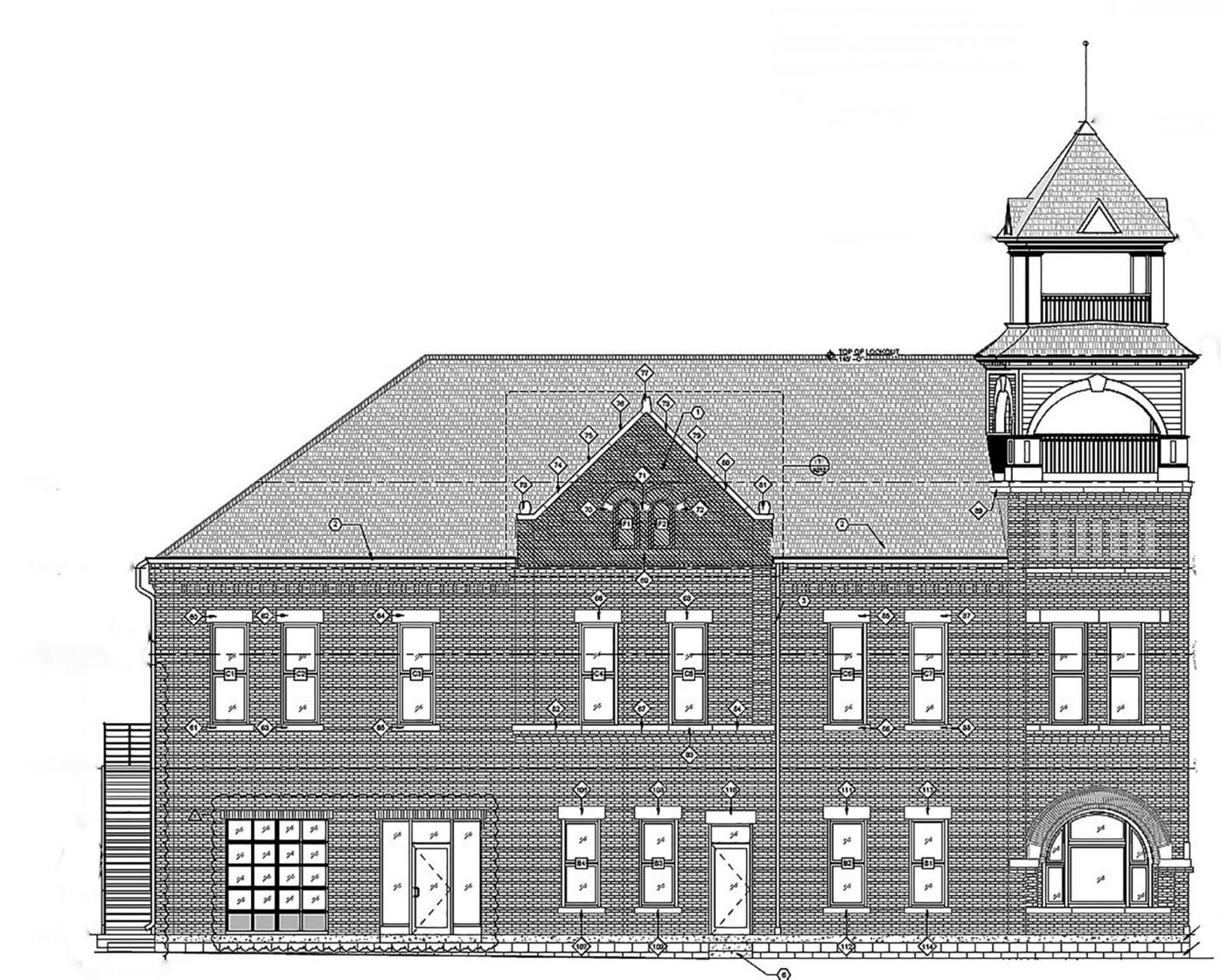 This drawing shows the restored bell tower (right) as part of the Old City Hall property at 100 E. Main St. The owner of the building is seeking a conditional use permit (CUP) to exceed the maximum building height allowed downtown in order to restore the tower to its original height.

BD One is seeking permission and tax increment finance (TIF) assistance from the City of Sun Prairie to restore the bell tower on the Old City Hall located at 100 W. Main St.

This drawing shows the restored bell tower (right) as part of the Old City Hall property at 100 E. Main St. The owner of the building is seeking a conditional use permit (CUP) to exceed the maximum building height allowed downtown in order to restore the tower to its original height.

BD One is seeking permission and tax increment finance (TIF) assistance from the City of Sun Prairie to restore the bell tower on the Old City Hall located at 100 W. Main St.

The Sun Prairie Plan Commission recommended waiving a height requirement Sept. 8 that, if approved by the Sun Prairie City Council, could clear the way for the reconstruction of the Old City Hall’s bell tower to its historic height.

The commission voted unanimously to recommend council approval of a Conditional Use Permit (CUP) to exceed the maximum building height limit in the Central Commercial (CC) Zoning District at the Old City Hall, located at 100 E. Main St.

City Planning Director Tim Semmann wrote in a report to the commission that applicant BD One — currently in the process of restoring the building after the July 10, 2018 natural gas explosion across Bristol Street from the Old City Hall — wishes to rebuild the two story bell tower onto the former City Hall building.

“Once complete, the top of the structure will reach approximately 64 feet above grade and return the building exterior similar to the way it looked in 1912,” Semmann wrote in his report.

The second floor interior space is being restored to its original use as a community gathering and assembly space.

If approved by the council, the CUP will allow the existing portion of the bell tower to remain — incorporating existing wood timbers, trim and siding when possible, and adding new wood where needed. Roofing elements will be covered with asphalt shingles and the guard rails will consist of powder coated aluminum, according to Semmann’s report.

The maximum building height in the CC zoning district is 40 feet, with church spires, belfries, cupolas and domes that do not contain useable space, and similar structures allowed up to 50 feet tall in non-residential zoning districts. Approval of a CUP is needed to exceed the 50 foot height limit, according to Semmann.

“The re-establishment of the bell tower element to the former City Hall building will be consistent with the Sun Prairie Stronger plan, which identifies the former City Hall as one of the most prominent properties in the Downtown Historic District,” Semmann wrote in the report.

“By rebuilding the historic bell tower, this building can dramatically contribute to the redevelopment of this incredibly important area of the city,” BD One wrote in materials supplied to the city that are part of the commission packet. “Historic buildings serve a perpetual link to a community’s cultural history. This cannot be truer than for Sun Prairie’s original City Hall. Once fully restored, this building will preside over the ongoing redevelopment of a critically important area of downtown Sun Prairie. It will be a constant reminder of the community’s strength and the value we place on constructing long-lasting, respected and beloved buildings & gathering spaces.”

The preferred option in the Sun Prairie Stronger plan calls for development on the opposite (west) side of the street to consist of a four-story boutique hotel, with the development at the southwest corner of Bristol and Main Street to be a 4-5 story mixed-use building.

“The height of the former City Hall inclusive of the tower element will be consistent with what is planned for this intersection,” Semmann wrote in his approval recommendation to the commission.

The site is included in the Downtown Mixed Use (DMU) category of the City’s 2019-2039 Comprehensive Plan.

The general intent of the DMU area is to preserve the architectural character of the historic commercial district, while providing significant density and intensity of uses befitting the growing City of Sun Prairie.

“The return of the bell tower element to the building is consistent with the comprehensive plan’s intent for this area,” Semmann added.

The City of Sun Prairie’s Fire Marshal has reviewed the plans and determined that the structure will be adequately served by internal firefighting equipment and appropriately protected and served by the Fire Department, according to Semmann’s report.

In order to complete the tower restoration, BD One will require tax increment finance (TIF) assistance from the city. District 1 Alder Steve Stocker asked whether or not that was already granted. BD One said in its materials submitted to the city that remaining exterior and bell tower improvements will cost about $230,000.

Semmann replied that he believed both approvals would be concurrent — referring to the CUP and TIF assistance — if both items were approved by the council on Sept. 15.

If anything is attempted to put sound back in the tower, the representative said, it would be electronic and likely require a noise variance from the city.