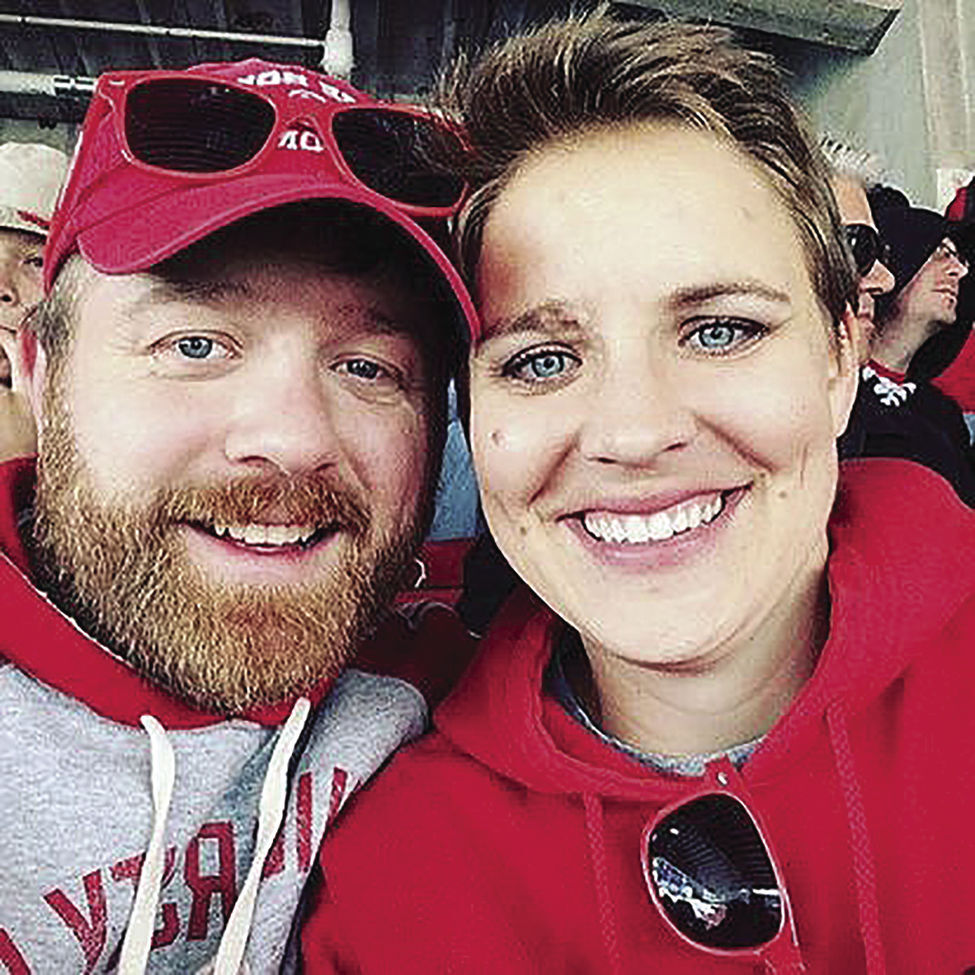 Mark Harris (left) of Sun Prairie is attempting to raise enough money to fight blood cancer that he can become the Leukemia and Lymphoma Society (LLS) Man of the Year for the Madison chapter and hopes to raise at least $50,000 to be able to name LLS advancements for Laura Olson (right), his longtime girlfriend who he lost to Primary Mediastinal Large B-Cell Lymphoma nearly five years ago. 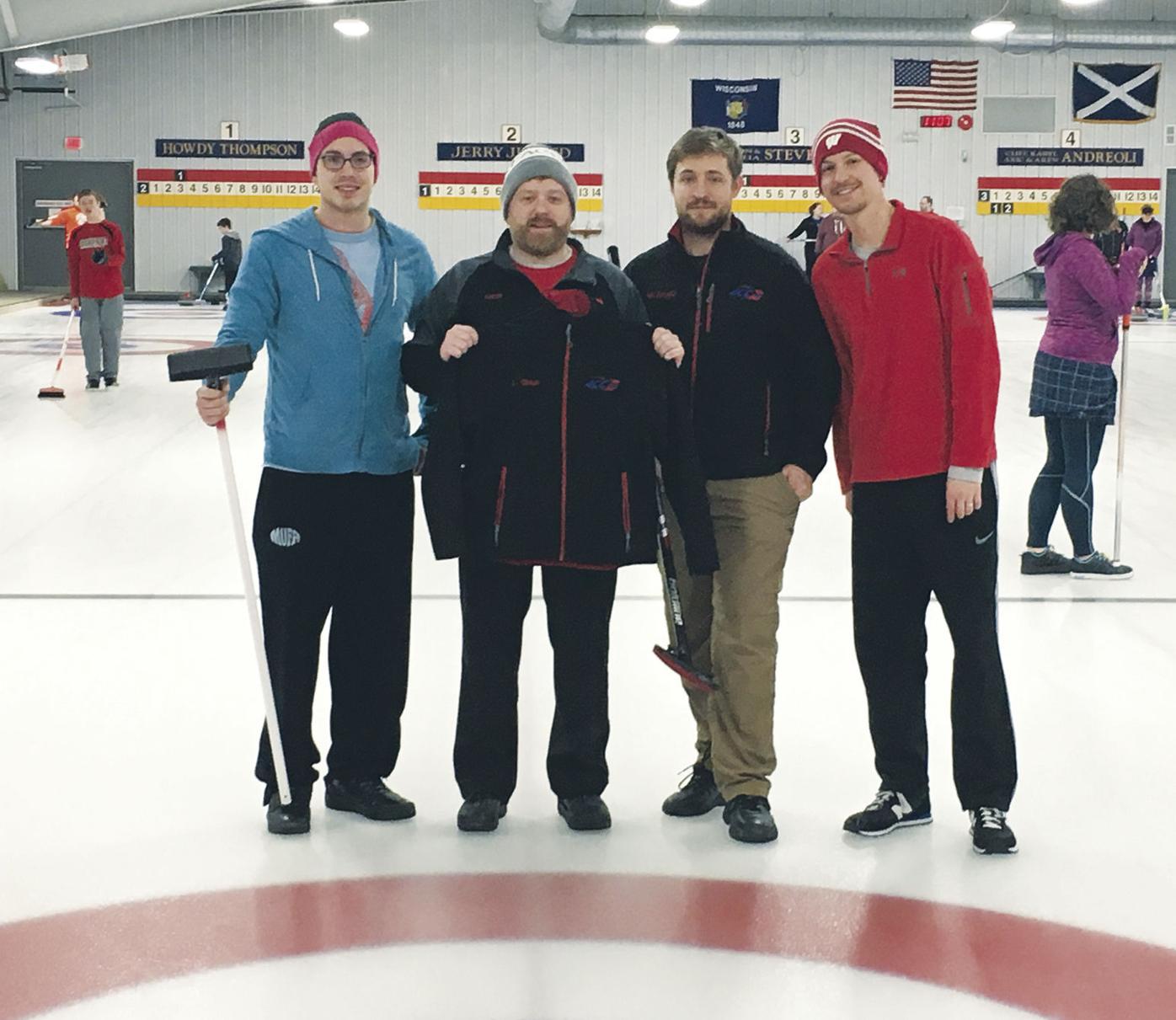 Mark Harris (second from left) held up Laura Olson’s jacket during a Curl for a Cure fundraiser held at the Madison Curling Club in McFarland to benefit the Leukemia and Lymphoma Society in honor of Olson, who died in 2016 of Primary Mediastinal Large B-Cell Lymphoma.

Mark Harris (left) of Sun Prairie is attempting to raise enough money to fight blood cancer that he can become the Leukemia and Lymphoma Society (LLS) Man of the Year for the Madison chapter and hopes to raise at least $50,000 to be able to name LLS advancements for Laura Olson (right), his longtime girlfriend who he lost to Primary Mediastinal Large B-Cell Lymphoma nearly five years ago.

Mark Harris (second from left) held up Laura Olson’s jacket during a Curl for a Cure fundraiser held at the Madison Curling Club in McFarland to benefit the Leukemia and Lymphoma Society in honor of Olson, who died in 2016 of Primary Mediastinal Large B-Cell Lymphoma.

A Sun Prairie man who lost his longtime girlfriend almost five years ago to cancer is in the midst of trying to earn the Leukemia and Lymphoma Society (LLS) Man of the Year Award.

“Laura was diagnosed, it would have been in late 2015. At the time she was living up in Eau Claire actually, and I was still down here in Madison,” Harris recalled. “I found out when I was at work — she gave me a call. She had been experiencing some pressure in her chest and had gone in for an x-ray. She thought she’d actually gotten hurt playing Ultimate Frisbee. She thought she had broken a rib or something. And when the x-rays came back, they saw a shadow, something that didn’t look right. And so she went and got further tested and we found out that it was this primary metastatic large B cell lymphoma.”

After Laura moved to Madison to begin chemotherapy treatments at University Hospital.

“She actually had to carry a fanny pack along with her and she’d be receiving it constantly for a week at a time. And then she’d be off for a week and then she’d go back in and get another fanny pack full of chemo. And it’d be constant — it had a pump in there — it was constantly giving her the chemo throughout the week. She did that for, oh, I think 10 rounds. And then the cancer was regressing. Things were, looking up, we thought the treatment was working. But there was still just a little bit of a mass that wouldn’t quite go away.”

“She would receive that twice a day during the week — she’d be the first appointment in the morning and then she’d be the last appointment there in the day,” Harris said. “She did that for a couple months. And you know, again, throughout this whole time, her spirits were up. After receiving the twice-a-day radiation treatments, she was still going and playing Ultimate Frisbee in the evenings even though I knew that she was tired and probably not feeling the best, but she just really wanted to stay active and see her friends and try to live as normal a life as possible.”

But after Laura completed her radiation sessions, a scan showed that the cancer had spread.

“There wasn’t much else that they could do at UW hospital, but, we found a clinical trial for, it’s called Car T cell immunotherapy. And they were doing some clinical trials around the country and we were lucky enough to get her into one in Seattle,” Harris recalled, adding that the LLS was instrumental in securing that treatment.

“And so within a week we had kind of packed things up and moved out to Seattle. Her mom actually was fortunate enough that she could stay with her the entire treatment. With my work and everything, it made it a little bit more difficult for me, but I was able to fly out there three times throughout the course of it and stay for like a week and a half at a time,” Harris said.

“We found out in late October that it wasn’t working, and so we returned home back to Madison before things got kind of real tough for her to get around,” Harris said. “And then she passed away in mid-November of 2016 . . . but throughout the whole thing, she was very adamant about continuing to do as much as she could to keep her life normal.”

Among the things they enjoyed together was curling at Arlington Curling Club.

“She would have loved to have curled that first winter, but that was right when she was doing all the chemo and that was just extra tough,” Harris said. “A couple of times when she was visiting down here at Arlington just me and her went out there just throwing a few stones just because she wanted to, but, obviously, at different stages, she was pretty weak and couldn’t do much. She really didn’t want to let cancer run her life and not let her do the things she loved.”

Her competitive nature even forced Harris to rethink his own curling plans.

“Because she was so competitive when we curled in Arlington, I actually stepped back from skipping for that season because I knew it probably wouldn’t work,” Harris said. “She would have been yelling at me the whole time, anytime things went wrong. I had to have my friend Rob skip that year because I was like, ‘I don’t think I can handle that’ because she put too much pressure on me.”

“She was competitive about everything she did, she was very passionate and wanted to do everything full bore. She didn’t want to go into anything halfway,” Harris said. “She really took to curling and really, really enjoyed the strategy and got really upset with herself when she missed a shot. But . . . she was able to kind of just get mad for a minute . . . it certainly didn’t ruin the experience of being out there cause she loved talking to everybody and the kind of the community that the curling club provided.”

Harris’ Arlington Curling Club friends and fellow curlers were among the first he reached out to when he announced his intention to seek the LLS Man of the Year Award.

Unfortunately because of the timing, Harris was unable to hold a bonspiel fundraiser at the curling club for his Man of the Year fundraising efforts, but he still has a few appeals planned.

“A lot of it’s been personal outreach — emails, letters, calling people that I know, but then we are also doing a few different events to try to drum up some interest,” Harris said. ”Coming up here, we’re going to be launching what’s called Take a Hike Cancer event. One of Laura’s passions was getting outside and hiking and being in the outdoors. And actually when she first was diagnosed, we made it a goal to get to every state park in Wisconsin. And we did a park every month until the very last month. So my big goal with that is to try to get every state park hiked in her honor, not necessarily by me, but by somebody in the group.

“We want people to go to my website where it explains how to register their hike. We have a few different supporter levels available for people, $25 gets your hike registered, $75 gets multiple hikes registered and a t-shirt and $150 gets all of that plus a scratch off Wisconsin state parks map. Hikes can be anything from a state park to a walk in your neighborhood — we just want people to get outside in honor of her and her love for being outside.”

To make a personal donation, learn more about his campaign as well as some of the events Harris will be having throughout the 10-week event please visit https://pages.lls.org/mwoy/wi/madison21/mharris or donors may make a check payable to The Leukemia & Lymphoma Society and mail it to: Mark Harris 1270 O’Keeffe Avenue Apt. 304 Sun Prairie WI 53590.

Harris is still seeking corporate partners/sponsors as well as auction items for a silent auction that will conclude on June 5. Individuals interested in donating should reach out to Harris via email at mark.d.harris.la@gmail.com or phone at 608-575-9469.