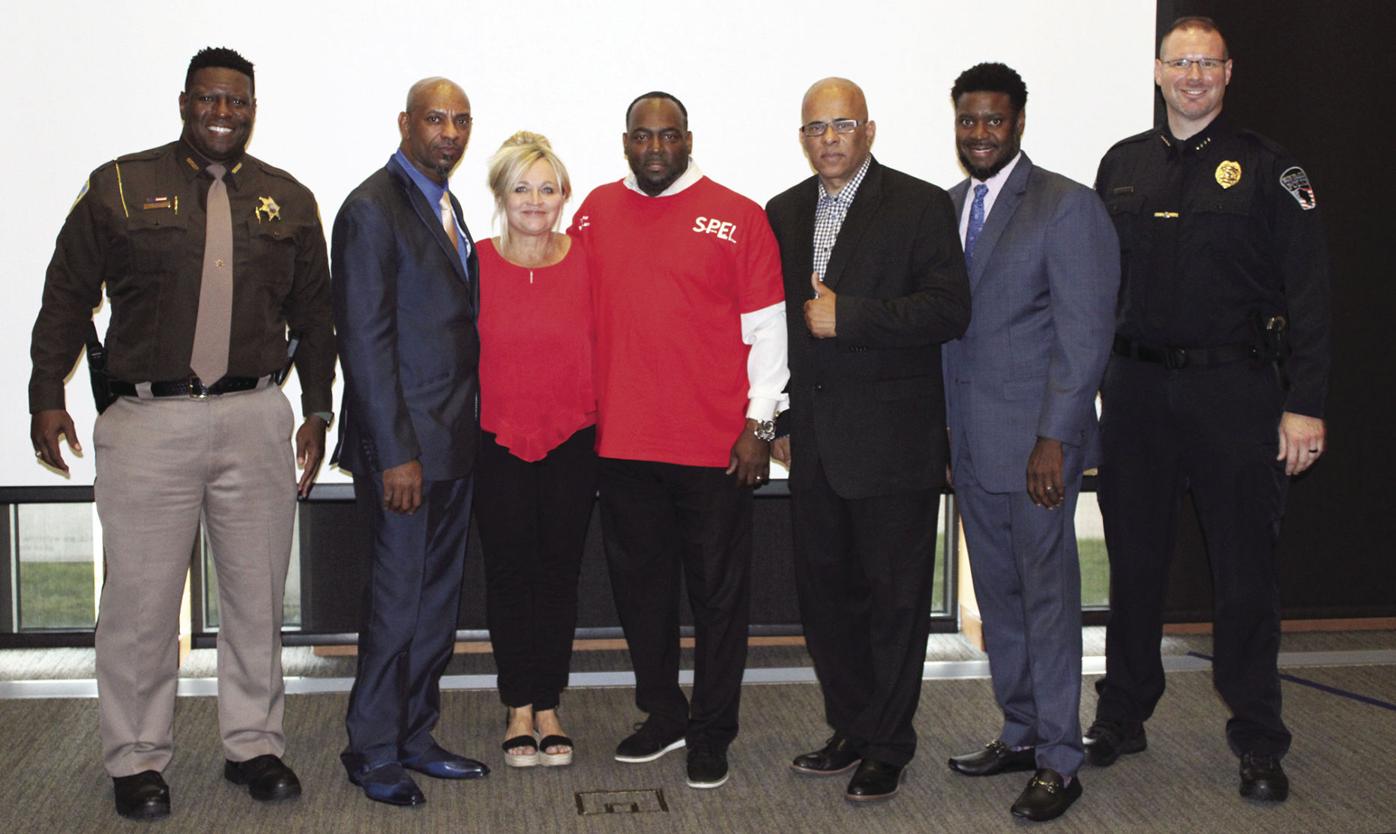 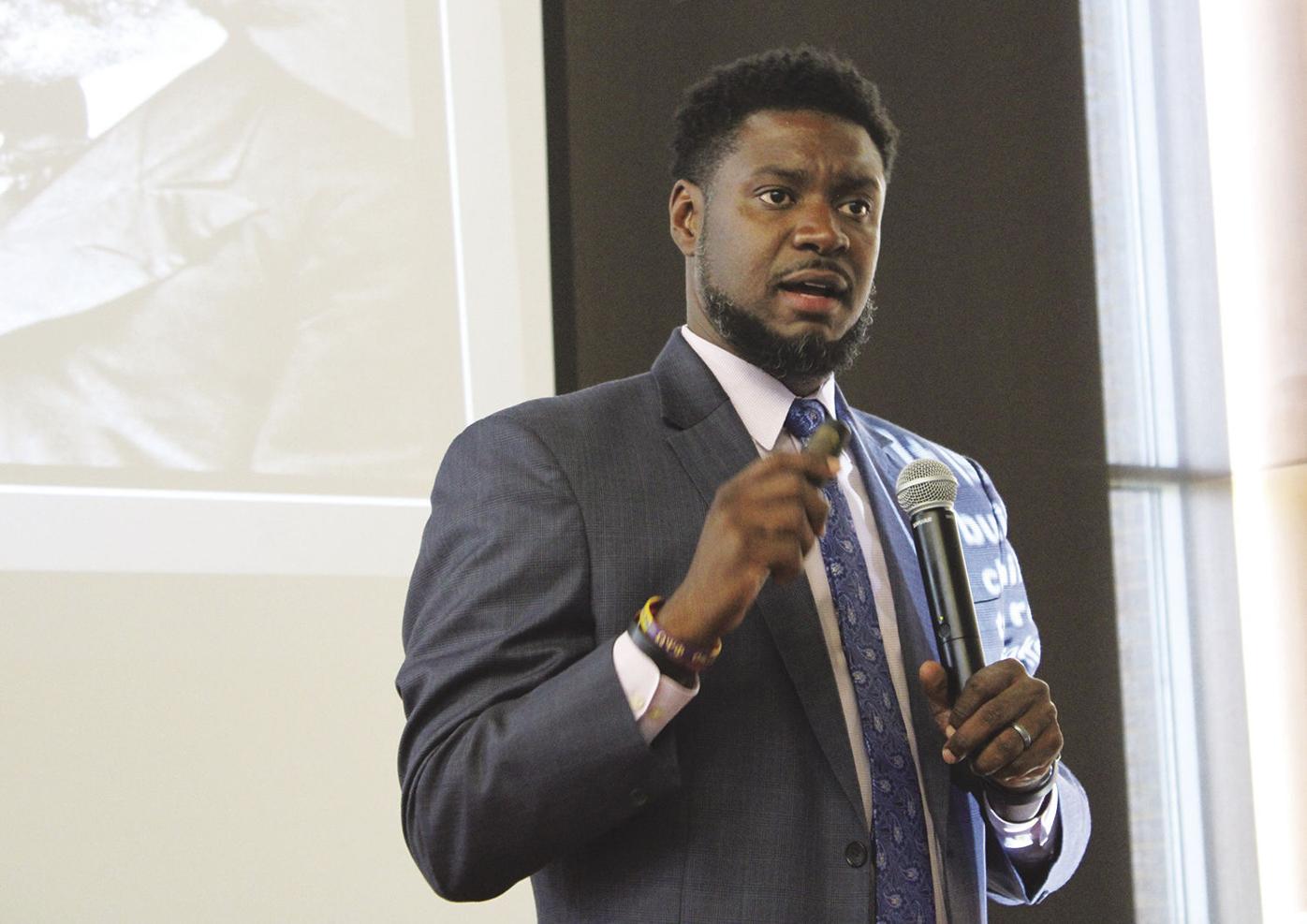 Dane County Circuit Court and juvenile rotation Judge Everett Mitchell, who is also an associate pastor at a Baptist church in Madison, spoke about the need to keep children out of the juvenile justice system. 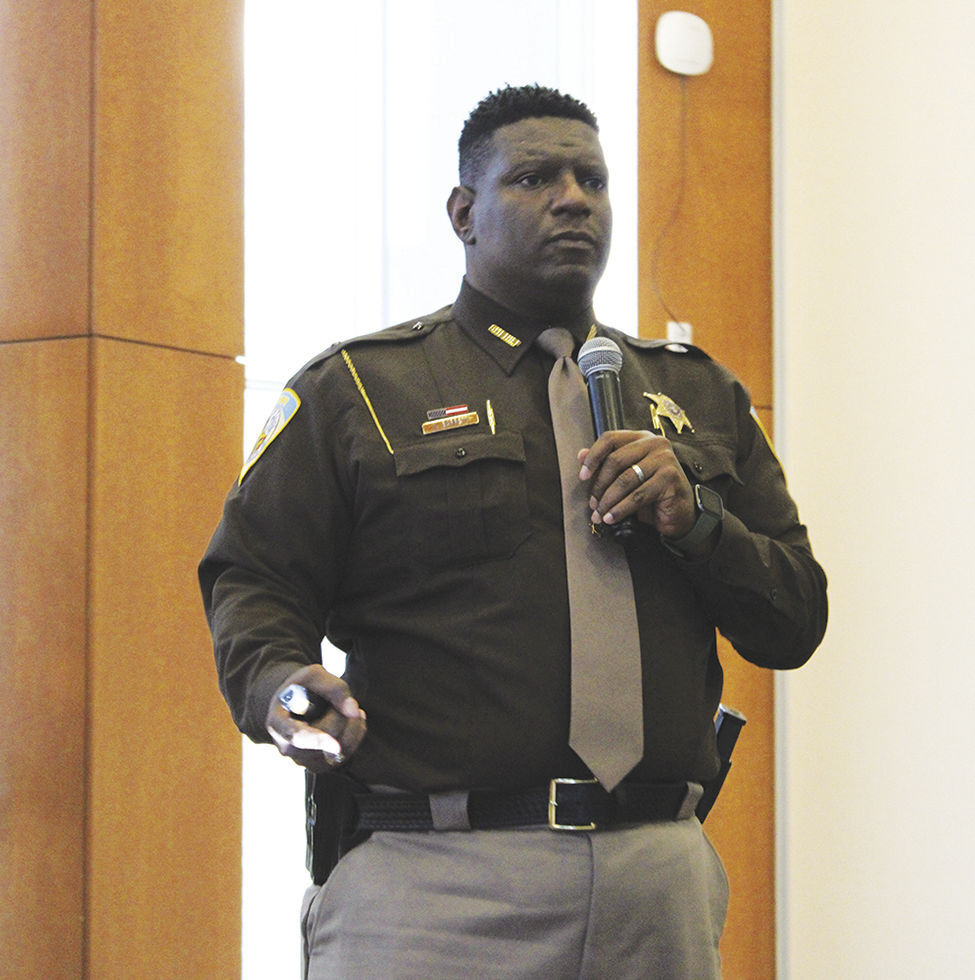 Dane County Sheriff Kalvin Barrett related a story about how he committed a felony as a young person and could currently be a convicted felon now, and he repeated the words, “I should not be here,” a reference to what might have happened to him if he had not been given a second chance. 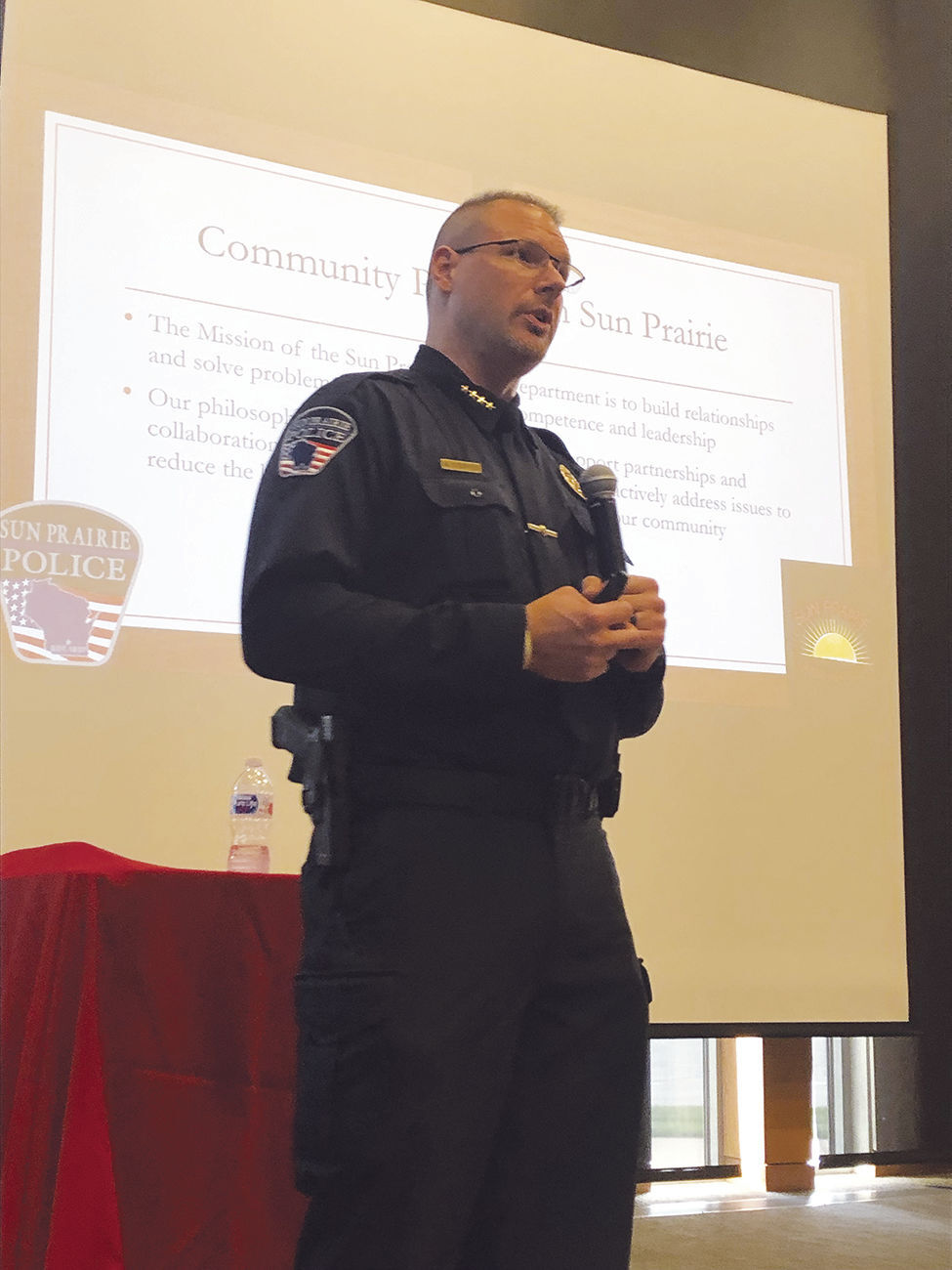 Dane County Circuit Court and juvenile rotation Judge Everett Mitchell, who is also an associate pastor at a Baptist church in Madison, spoke about the need to keep children out of the juvenile justice system.

Dane County Sheriff Kalvin Barrett related a story about how he committed a felony as a young person and could currently be a convicted felon now, and he repeated the words, “I should not be here,” a reference to what might have happened to him if he had not been given a second chance.

During a two-hour July 11 community open house, the Sun Prairie Excel Institute hosted a judge, a sheriff, a police chief, a Violence Interrupter and a pastor in Sun Prairie’s Westside Community Service Building to call for the elimination of juvenile crime in Sun Prairie.

SPEI is based on the program “Violence Interrupters”– a data-driven, violence reduction, research-based initiative. SPEI relies on five components that work together to anticipate and interrupt the transmission of high-risk events and change the social norms and behavior that perpetuate violence. The components are: street outreach, conflict mediation, public education, restorative justice, the involvement of faith leadership and law enforcement participation.

Mitchell played a portion of the Wisconsin Public Television documentary “Not Enough Apologies,” which included the story of a juvenile male eventually sentenced to 45 years in prison.

“I start with this idea . . . that it is far easier to build strong children than to repair broken men and women. It is by Frederick Douglass. And I live by that creed because I think that if we’re going to create systems, we have to create systems that are based in a philosophy. Sometimes I think judges are beholden to case law or what has been said by the Supreme Court. And we’re really not,” Mitchell told the crowd of about 75 people.

Mitchell said juvenile court uses ACE, or adverse childhood experience, scores to determine the level of trauma a child has experienced before entering the juvenile justice system. An ACE score of 1 decreases a child’s life expectancy by 10 years.

Mitchell said he tells parents to be better co-parents because of the divorce rate in the county; not to touch traumatized children because of a potential adverse reaction; and to keep children in school to educate them.

“One of the things that I like to tell community members about is something special about the juvenile justice system — it is different than any other system,” Mitchell said. “We are supposed to not only protect the public and make sure that they are held accountable, but we’re given the individual responsibility to make sure that we give an individualized assessment so that they do not do further delinquent behavior and become productive citizens in the community.”

So, Mitchell asked, with disparities of prosecutions between Black and white children pointed out, why isn’t the juvenile justice system doing better? Part of it is changing the paradigm mindset. One of the ways Mitchell changed it was to use trauma-informed strategies in dealing with juveniles in the justice system, and that included taking restraints off most offenders.

“In the four years since we changed that policy, how many kids are you thinking have acted up, talked crazy, tried to kick over tables . . . How many kids you think?” Mitchell asked. “Zero.”

Then, Mitchell began focusing on the juveniles’ education — even threatening some school districts with legal action because they refused to have them in the school building. Then, he also focused on demeanor with juvenile offenders — being receptive to them in court and wanting to help them.

“When I take the bench and I put on my robe, when I settle into the bench, the most important thing I do is that I remember what an old judge taught me. He said, ‘find something about the kid that you like and then find something that you can praise them for the moment you sit down’,” Mitchell said.

While sometimes that is difficult, Mitchell told a story of a male juvenile he helped simply by giving him a fidget spinner and telling him to spin it when he felt anxious or like acting out. The Sun Prairie resident told the crowd that it worked — even though he had to give the offender a new spinner each week because the male wore each new one out. When it came to referring the boy for help, he took to the program and never came back to Mitchell’s court. “I do believe we can build strong children. We can build them, but it’s up to us to use our creative imagination,” Mitchell said. “And most importantly not lose our heart in the process.”

‘I Should Not Be Here’

Barrett told his own story as evidence from the statement that life is not over after being arrested.

After Barrett signed his letter of intent to play football at UW-Madison, some friends and he borrowed a car, bought some eggs and decided to throw eggs at pedestrians and cars. One of those receiving an egg was an undercover cop. And, throwing eggs from moving vehicles was a felony in Wisconsin, Barrett said.

Instead of arresting and prosecuting Barrett, the undercover detective administered some restorative justice: He made the kids wash the car at a wash-it-yourself car wash. Had he been arrested, Barrett said, his life would most certainly be different today. Throughout his presentation, Barrett repeated the statement: “I should not be here.”

But because he was given a second chance, Barrett said, he was able to finish his education at the UW, graduate, become a Sun Prairie Police Officer and eventually Dane County Sheriff.

Barrett also said he brings a “peace officer” mindset to the job as sheriff, not one of a law enforcement officer. Citing the state statute, Barrett said sheriffs need to do what they can to “keep the peace,” which he said means using arrest as a last resort.

He also asked the question: How many people need a second chance to do good? He listed many of the sheriff’s office programs available to inmates, including a program that allows inmates to get their general equivalency diplomas.

The sheriff also recalled a story when he worked as an officer for the Sun Prairie Police Department and had a case where kids were stealing from a local store every Thursday about the same time. When he finally was able to make contact with the kids, he learned they were stealing food because they were hungry. But instead of arresting them, Barrett got them and their families in touch with the Sun Prairie Emergency Food Pantry and the Bed Lady and got them the services they needed.

Barrett also emphasized the need for people to bring their life experiences to their jobs, and that includes deputies. “What we bring to the table matters,” Barrett said.

The SPPD has a youth academy, which graduated 17 Cardinal Heights Upper Middle School students this year, and a Youth Leadership Program at Sun Prairie High School — a program Steffes said he was particularly proud of because his daughter created it as a SPHS student.

The SPPD regularly attends community events in an effort for residents to get to know their officers, participates in the Friday Night at the Y (which recently re-started after nearly a year due to COVID-19) along with other emergency services personnel; and conducts National Night Out, which this year will take place Aug. 5 at Cannery Square in downtown Sun Prairie.

And the SPPD uses a victim-centered approach, including work with the Violence Interrupters program and restorative justice through the Community Resource Coalition and other agencies. In 2020, Steffes said, 19 opted in to restorative justice, with 12 cases adjudicated successfully and 6 still in process, and one failure.

Coming from the streets

Hardiman, who founded Violence Interrupters in Chicago and exported it around the world, said the goal of the program is to try to stop conflict before it happens. He told stories about Chicago, which has a 9-14% clearance rate of homicides.

Violence Interrupters go through a 40-hour training that includes strategies on conflict resolution and mediation using a public health model. Hardiman said he is currently training Kenosha Police officers in peace circle techniques in an effort to reduce further conflict in that community.

Hardiman told several stories about how he intervened to save lives in Chicago, including how he told a gang leader that a gang security guard was not an undercover police officer but instead had to go to the hospital to care for his sick mother.

“I want to save lives in Chicago,” Hardiman said.

Hardiman said one of the things he has found through his experience is that people are ready and willing to hurt others because they are hurting themselves.

In closing, Tabron said when he initially arrived in Sun Prairie, he could see the foundations of a juvenile crime problem. He said he contacted Mayor Paul Esser, who said he would work with any agencies to reduce the potential for violence in Sun Prairie.

Tabron said the Sun Prairie Excel Institute will allow Sun Prairie to pitch in as a community to eliminate juvenile crime, and to send the message, “Don’t bring it here.”