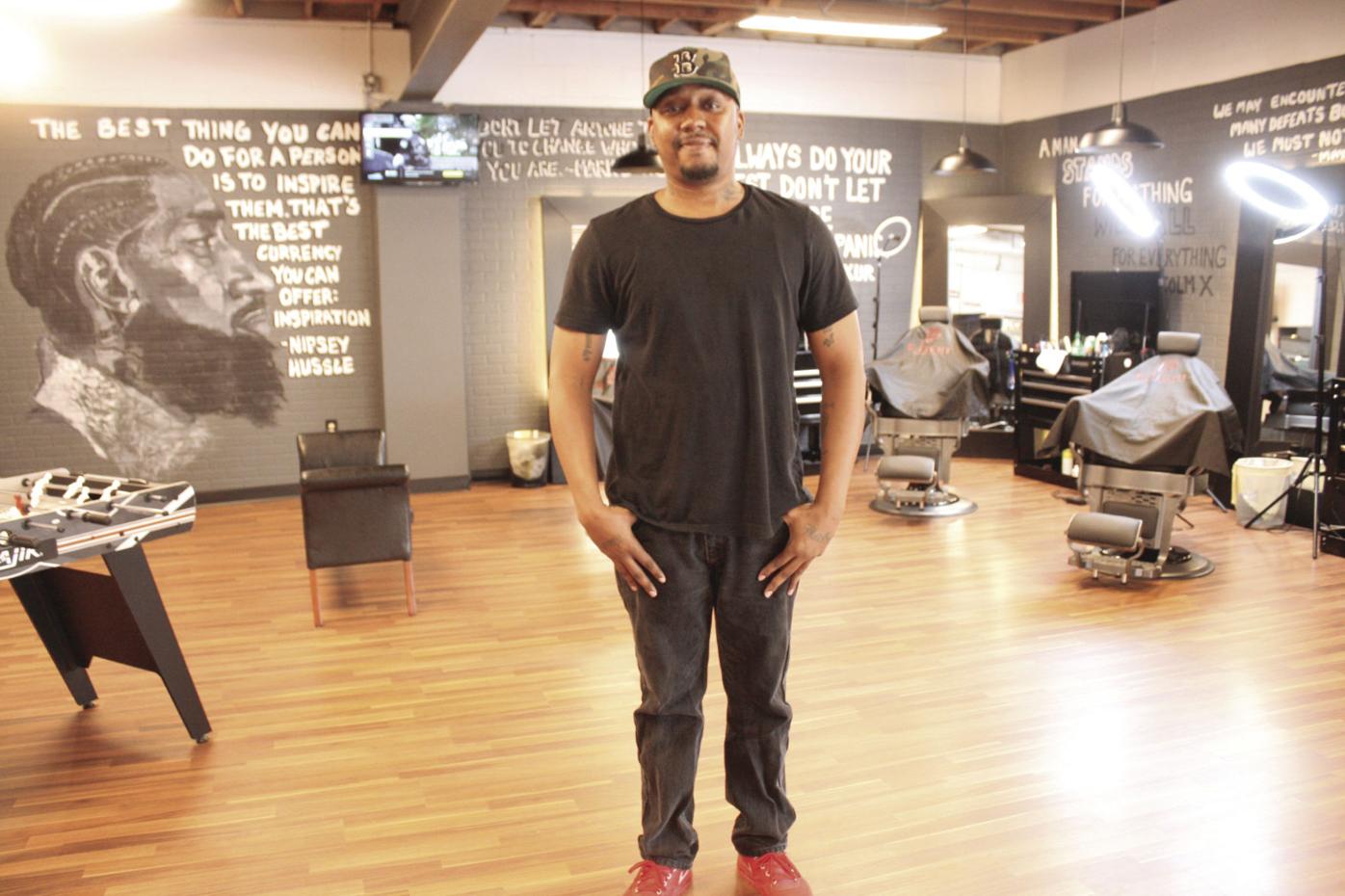 Jason Boatright graduated from the Madison College cosmetology school in 2016 and now owns B. Right barbershop in Sun Prairie. Murals and quotes on the walls helps inspire Boatright and his customers. 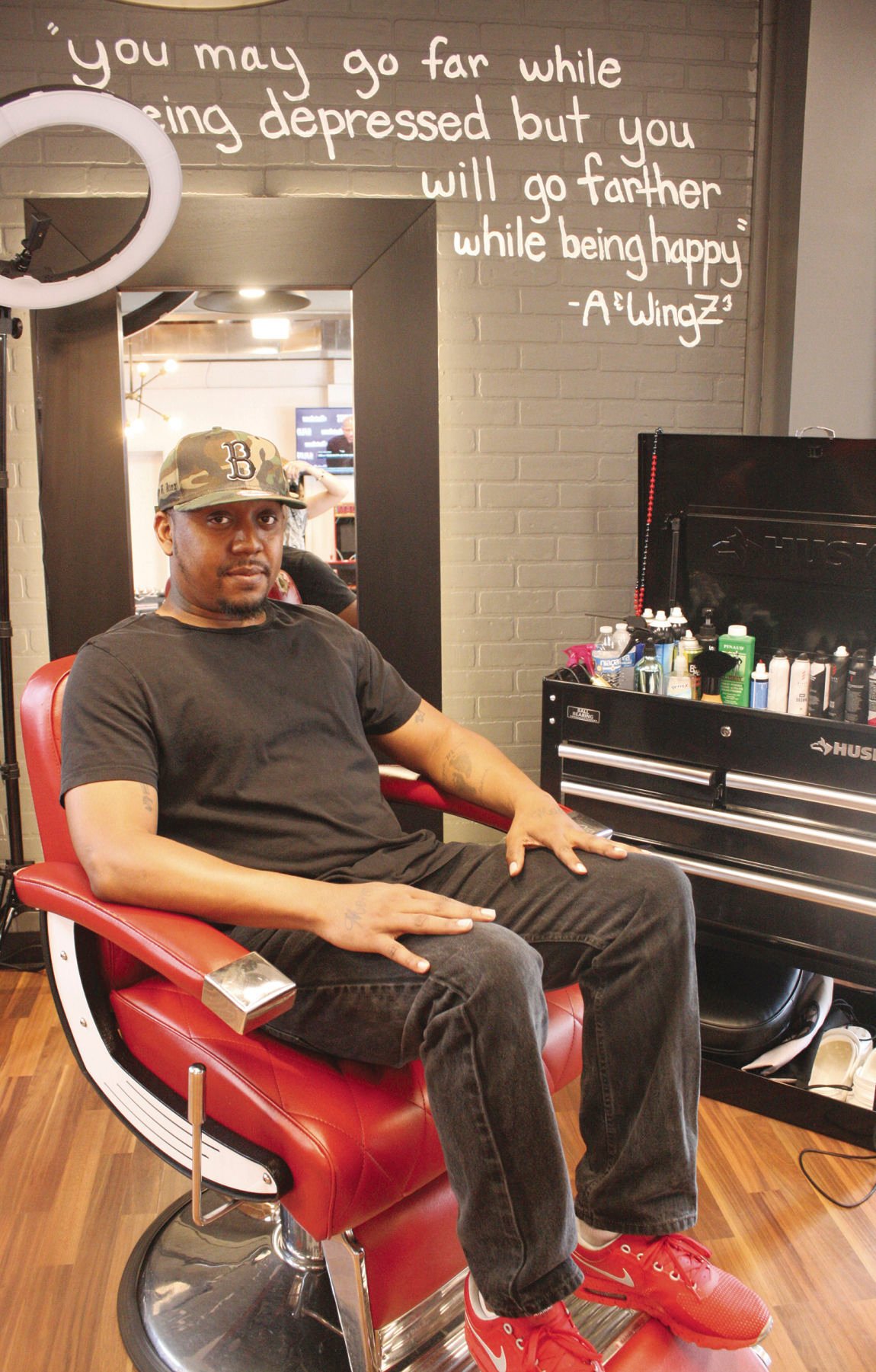 A good haircut can be transformative, according to B. Right barbershop owner Jason Boatright. Clients having a bad day leave his barbershop smiling. “I good haircut can make your day and change your outlook,” Boatright said. “I’ve had people get jobs because they have confidence when they look good.”

Jason Boatright graduated from the Madison College cosmetology school in 2016 and now owns B. Right barbershop in Sun Prairie. Murals and quotes on the walls helps inspire Boatright and his customers.

A good haircut can be transformative, according to B. Right barbershop owner Jason Boatright. Clients having a bad day leave his barbershop smiling. “I good haircut can make your day and change your outlook,” Boatright said. “I’ve had people get jobs because they have confidence when they look good.”

It’s just a bunch of guys hanging out at the B. Right barbershop in Sun Prairie—Barack Obama, Nipsey Hussle, Mark Zuckerberg, Malcolm X, and you, getting your flat top fade.

It’s just another day at B. Right Barbershop where owner Jason Boatright aims to inspire with great cuts. The art murals and quotes on the walls are the people and words that got Boatright from the fourth barber chair to owning his own barbershop.

“You have to be motivated,” Boatright says. “You have to put your all into it. You can’t give 75 percent and think you are going to get 100 percent out of it.”

Boatright graduated from Madison College cosmetology program in 2016 but has been cutting hair all his life. With 12 siblings, eight of them brothers—he’s had a lot of practice.

“My dad was cutting my hair, but I didn’t like it,” he remembers. “I wanted a new hairstyle, so I learned to cut my own hair.”

He soon was cutting all his brothers’ hair and set up a barber chair in the family’s basement. But he didn’t think at first it was a profession to pursue.

“I didn’t see many successful barbers,” Boatright says. “I didn’t think it was a career but when I got older, I realized that wasn’t true and I got serious about it.”

He credits Madison College instructors, and his former boss Terry Moss, who gave him his first barber gig at Atwood Barbershop, for topping off his skills.

“I knew how to cut hair, but they just took me to another level,” Boatright says. “A great cut goes a long way, but I learned from Terry that it was about getting to know your clients—asking them what is going on with their lives.”

Just have faithThe Safer-at Home COVID-19 restrictions last spring hit Boatright hard with the barbershop having to close down.

“There were a lot of times that I didn’t think I would make it out,” he says. “But I just kept my faith and was patient and stuck to the rules.”

Business is back and surpassing pre-COVID numbers — something that ironically the pandemic has helped.

“Now that clients are on Zoom, they have to look presentable,” Boatright says. “I have clients that used to come in every other week who now come once a week because they are on camera every day.”

A good haircut can be transformative, Boatright says. Clients having a bad day leave his barbershop smiling.

“I good haircut can make your day and change your outlook,” Boatright added. “I’ve had people get jobs because they have confidence when they look good.”

But if Boatright thinks a cut you requested won’t look good on you, he’ll lay down the truth because clients are walking advertisements for B. Right. Some clients trust Boatright so much they don’t even use a mirror to check out his work.

That’s something he takes pride in.

“I want to give my clients exactly what they are asking for, as close to possible to the perfect haircut,” Boatright says.

A sense of communityThe barbershops of Boatright’s childhood were welcoming places.

“Barbershops are part of the community, that is what it was like when I was growing up,” he says. “Whatever you needed you could go to a barbershop and get it: food, shoes, a shirt.”

B. Right welcomes not just adults, but also kids and teens. In the corner of the barbershop, there is a lending library with books that inspire Black kids, with stories about Barack Obama and Bessie Coleman, the first African American woman to earn a pilot’s license. On the barbershop’s wall, framed pictures of Black leaders and posters pay homage to Black history.

Being a barber, Boatright has heard his share of client opinions, trials and tribulations, and he’s always ready to listen and offer encouragement to those having tough times.

“I tell them to stay the course,” Boatright says. It may get rocky and rainy but when the rain goes away the sun will come peeking out.”

Boatright just doesn’t care about his client’s appearance but also their health. B. Right has partnered up with the Men’s Health and Wellness Clinic, bringing a nurse on-site at the barbershop for blood pressure checks and other medical exams. He’s also recently hosted a COVID-19 vaccine clinic. Boatright says it’s important that men keep up their health.

“Men, especially Black men, think they are invincible,” he says. “They won’t go to the doctor, but I tell them we are not superheroes. This clinic is important. This could save their lives.”

On Father’s Day, Boatright hosted an appreciation day for fathers with music, food and card games.

His goal is to create a community at the barbershop.

“Everyone is welcome here,” Boatright says. “With all the division going on in the world now. I want people to feel comfortable here in their own skin. We need more places like that.”