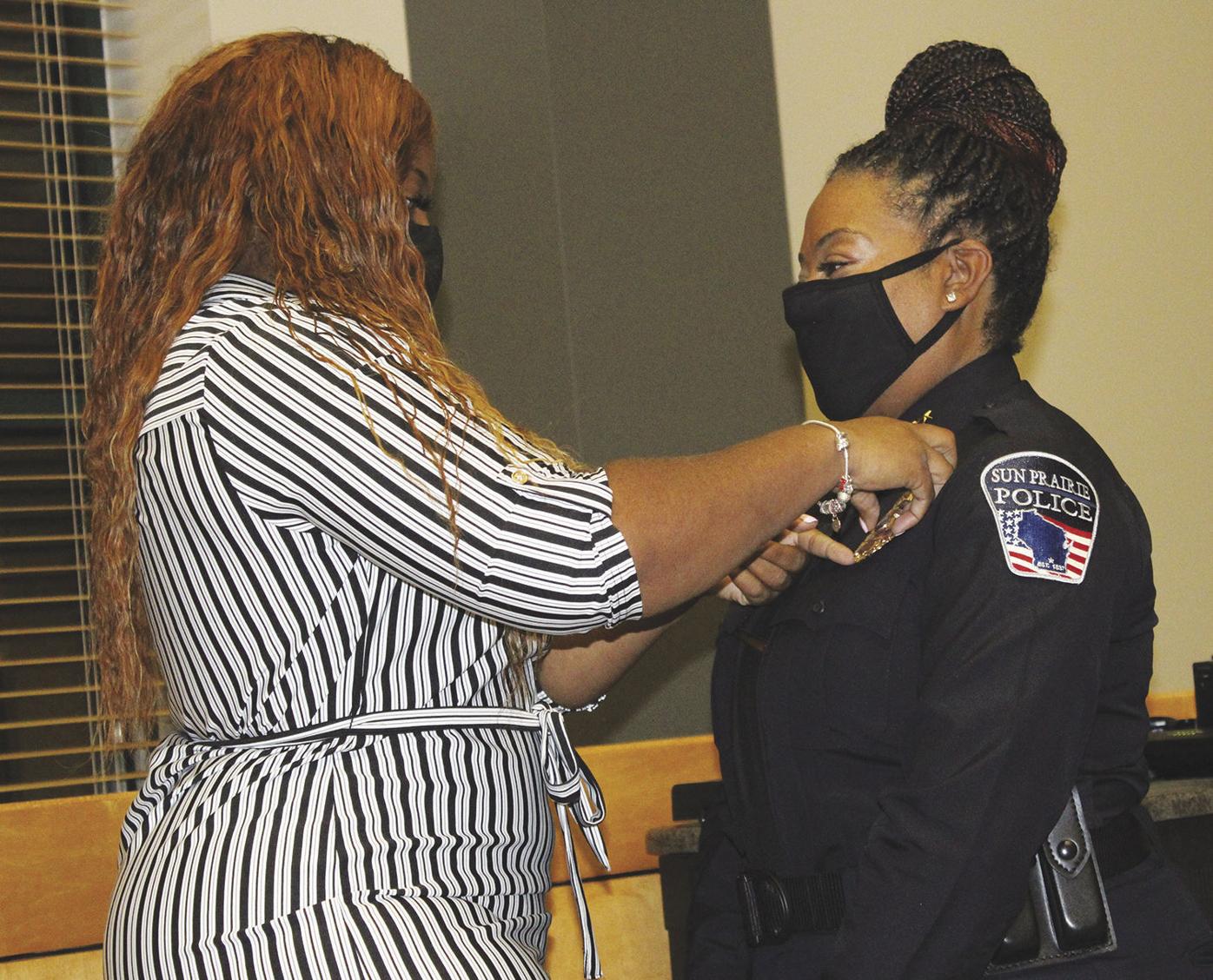 New Sun Prairie Police Assistant Chief Shunta Boston has her badge pinned on her by her daughter during the Oct. 5, 2021 Sun Prairie City Council meeting — marking the first time in city history that a Black woman has held the position. 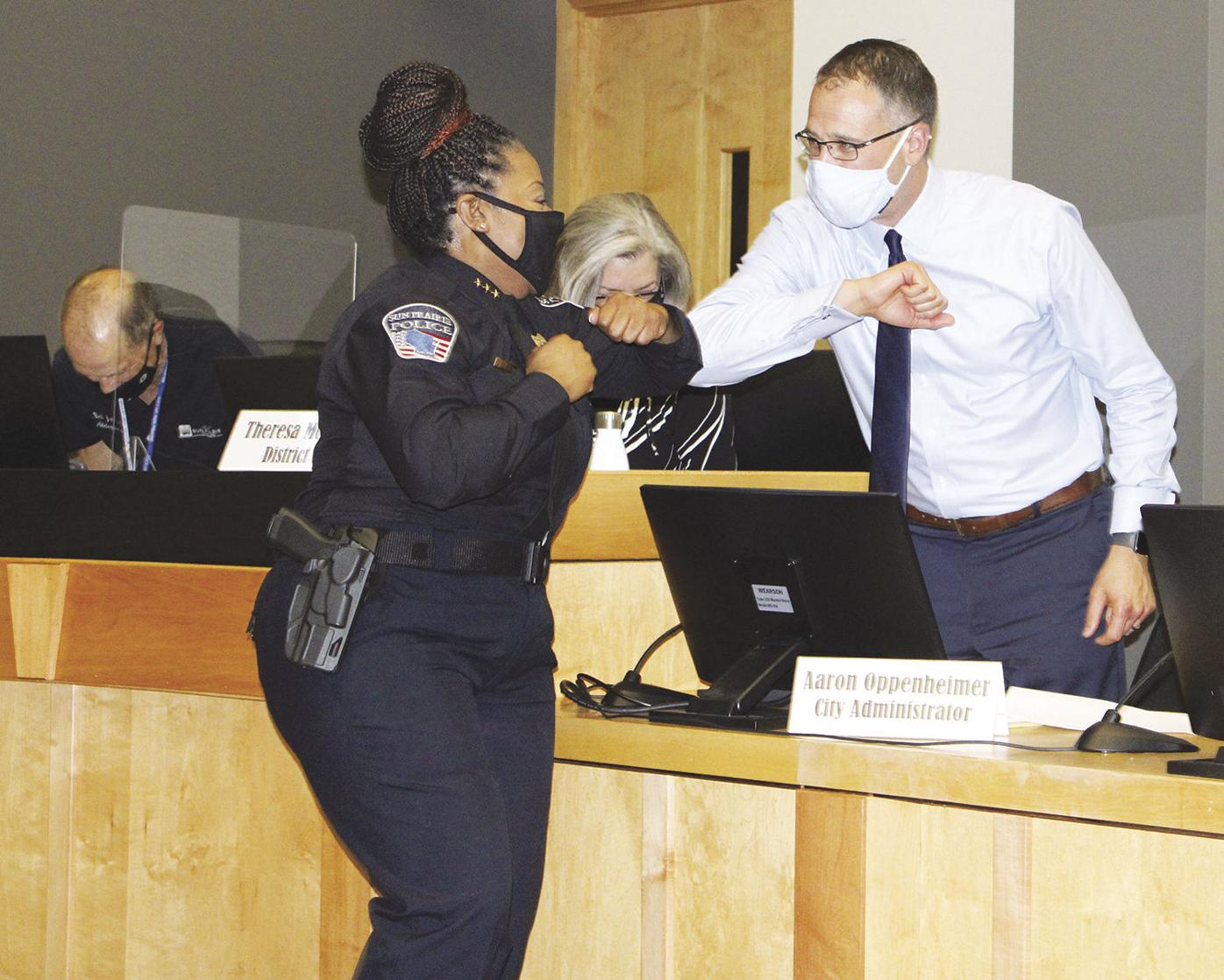 New Sun Prairie Police Assistant Chief Shunta Boston has her badge pinned on her by her daughter during the Oct. 5, 2021 Sun Prairie City Council meeting — marking the first time in city history that a Black woman has held the position.

Mayor Paul Esser made no effort to ask those in the chambers to leave, but instead praised the hiring of the new assistant police chief — the first female and African-American assistant chief in the city’s history.

“We have a young police department and especially the upper ranks, the lieutenants and the sergeants are a pretty young group right now. The chief is a mature person saying that he has had some years in police work and now Shunta is in the same position, but what she brings to it is a unique set of experiences,” the mayor told the council from the council chambers podium during the first in-person interaction in the council chambers since the COVID-19 pandemic in 2020.

“She’s coming to us from the Milwaukee Police Department, so a much larger department. And that means she’s had exposure to things that people here in Sun Prairie have not seen. And that gives us an opportunity to learn from her,” Esser said.

Prior to being an Inspector, she previously held the ranks of Sergeant, Lieutenant and Captain. During her tenure with the Milwaukee Police Department, Boston led the Forensics Division in the Criminal Investigations Bureau, led the department to accreditation, and was the project manager for the settlement agreement.

“I think that gives our lieutenants and sergeants the opportunity to have some time to learn their jobs. Well, the chief and the assistant chief are organizing the department. We were talking this morning about, we know that policing needs to change over time,” the mayor said.

“We’ve heard a lot of that in 2020 and 2021, and we need to implement some of that in Sun Prairie — thoughtfully implement it. I know the chief has that ability and Shunta will also be a good addition to that process because she knows things the rest of the department doesn’t know, and she brings unique experiences with her,” Esser said.

“She is a solid police professional, and that’s why she’s here,” Esser added. “But obviously she brings something else to this department as well. She is the highest ranking female officer that we’ve ever had. And she is the first assistant chief of color or a lieutenant of color that we have had in this department. And you know, how strongly I feel about that — the city council hears this from me all the time.

“That’s where Sun Prairie needs to be headed and we need to provide Sun Prairie with a path on how to get there,” the mayor said.

“The first thing you need to know about Shunta is she is a solid professional — period. She is good. Add to that ethnicity and gender, and we are somewhat unique in Sun Prairie,” Esser added.

“And I am so pleased that she is here. We met for maybe an hour this morning — she, and the chief and Aaron Oppenheimer. And we had a very vigorous conversation,” Esser said. “And I think that’s just the beginning of what is going to come in this community.”

“What you see is what you get,” the new assistant chief said after Esser spoke. “I was born and raised in the city of Milwaukee. I have 26 years of police experience. And I have learned in almost every area in law enforcement on that police department,” Boston added.

“And I spent a substantial amount of time in each one. And so all that information just kind of speaks for itself, but I have a passion for community policing. What brought me to Sun Prairie? The mission — building relationships and solving problems,” Boston said.

Speaking after Boston and just before the ceremonial swearing-in, Police Chief Mike Steffes explained how Boston got the job.

“I had the good fortune to be able to have several conversations with Shunta by telephone as we were recruiting and talking and sometimes I think for maybe more than an hour, as we talked about policing philosophy and leadership styles,” Steffes said.

“And it became evident to me very quickly that Shunta was definitely a top runner for our next assistant chief. We were very excited and happy to welcome her aboard,” the chief said. “Thank you so much for joining our team, we’re very excited to have you. We can’t wait to be able to police the community and be out there working with everybody. Shunta was already out doing her first walkabout today, so it was nice to be able to have her out in the community, actually knocking on doors, visiting with people today already.”

Shunta’s daughter pinned her badge on her after the swearing in, and she elbow-bumped the alders around the council dais. Then she left with her family and went outside the council chambers and celebrated with members of the department, friends and family.