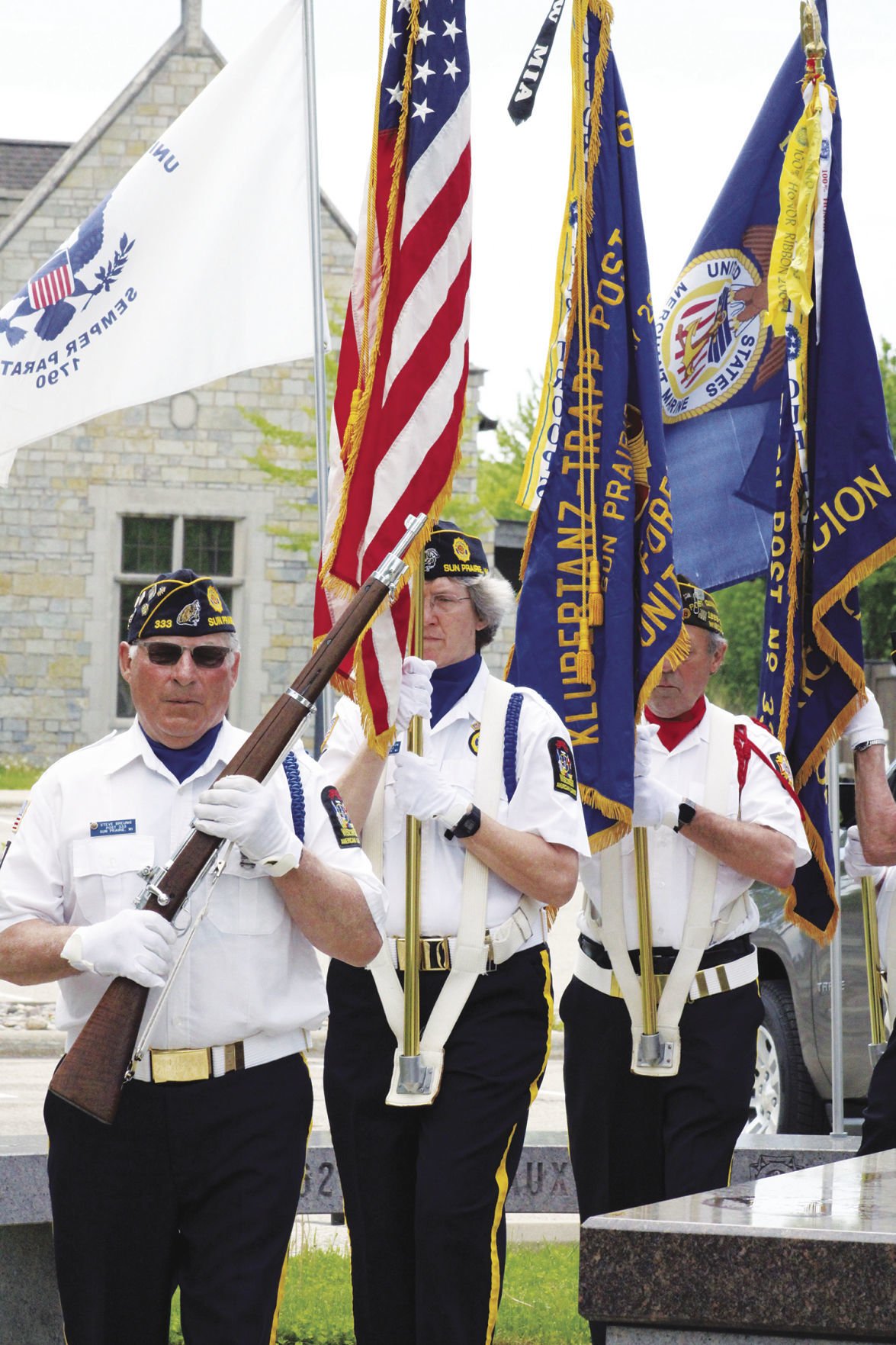 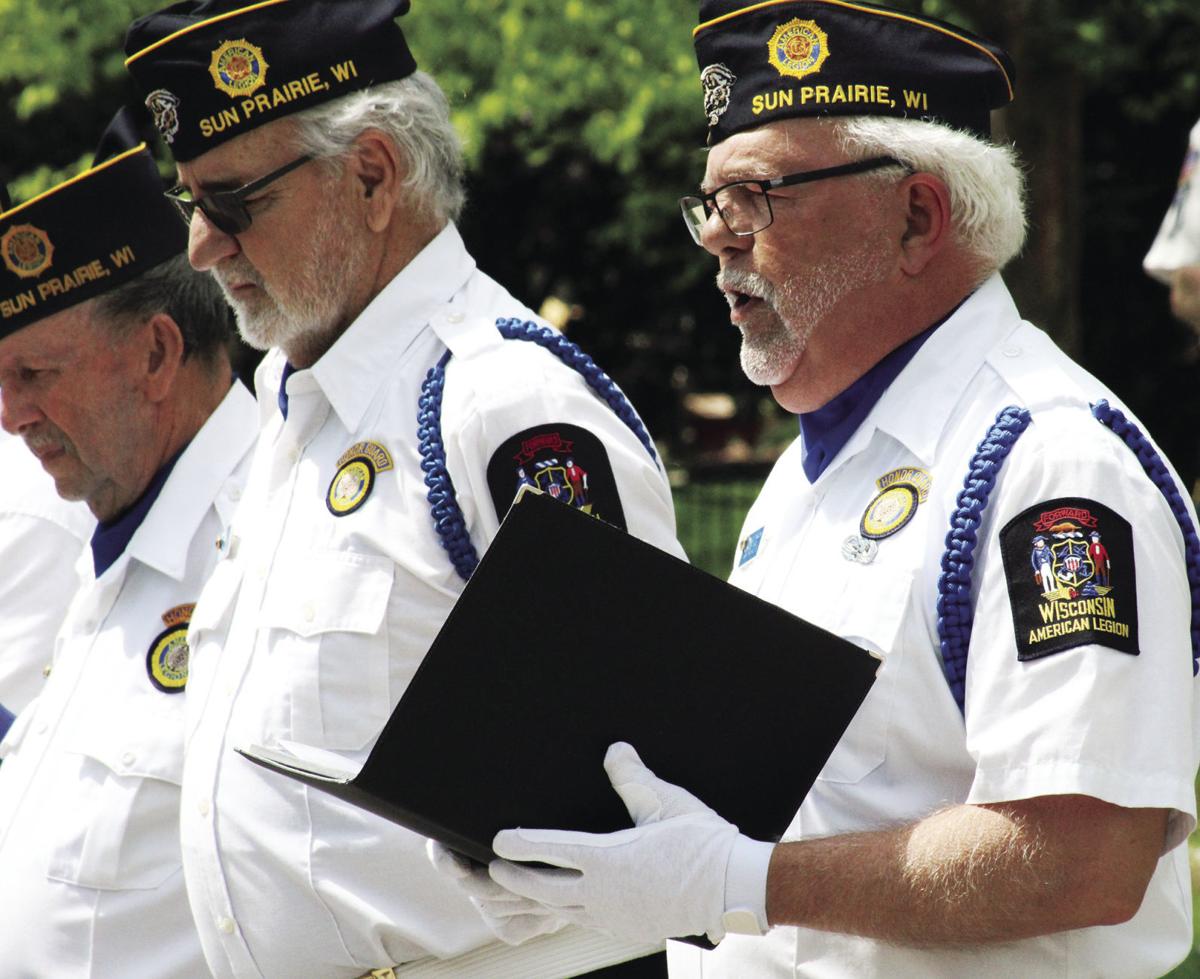 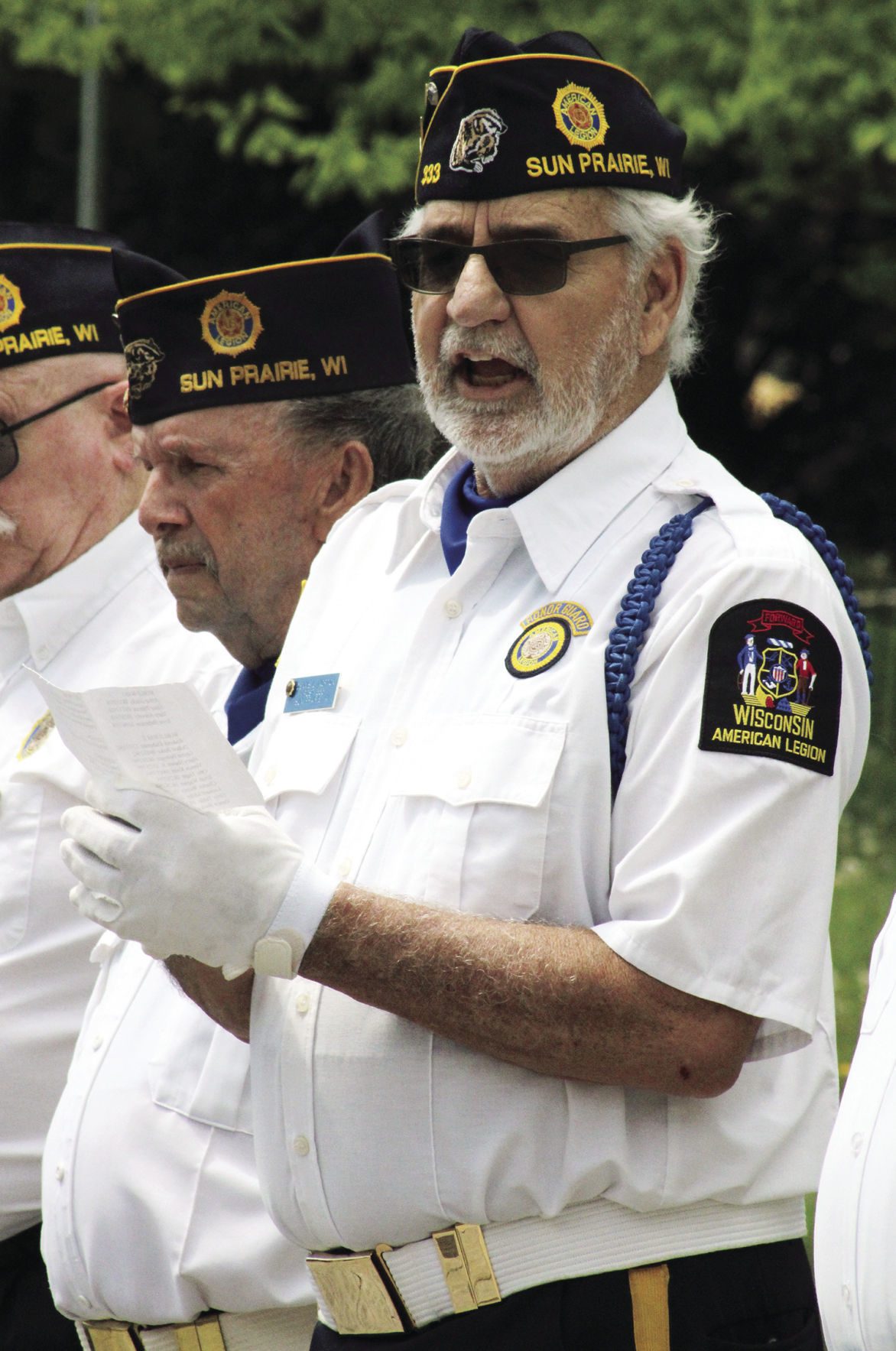 Dennis Norton from VFW Post 9362 read the names of service members from Sun Prairie who died during wartime service as part of the Monday, May 25 Memorial Day Ceremony at the Sun Prairie Area Veterans Memorial. 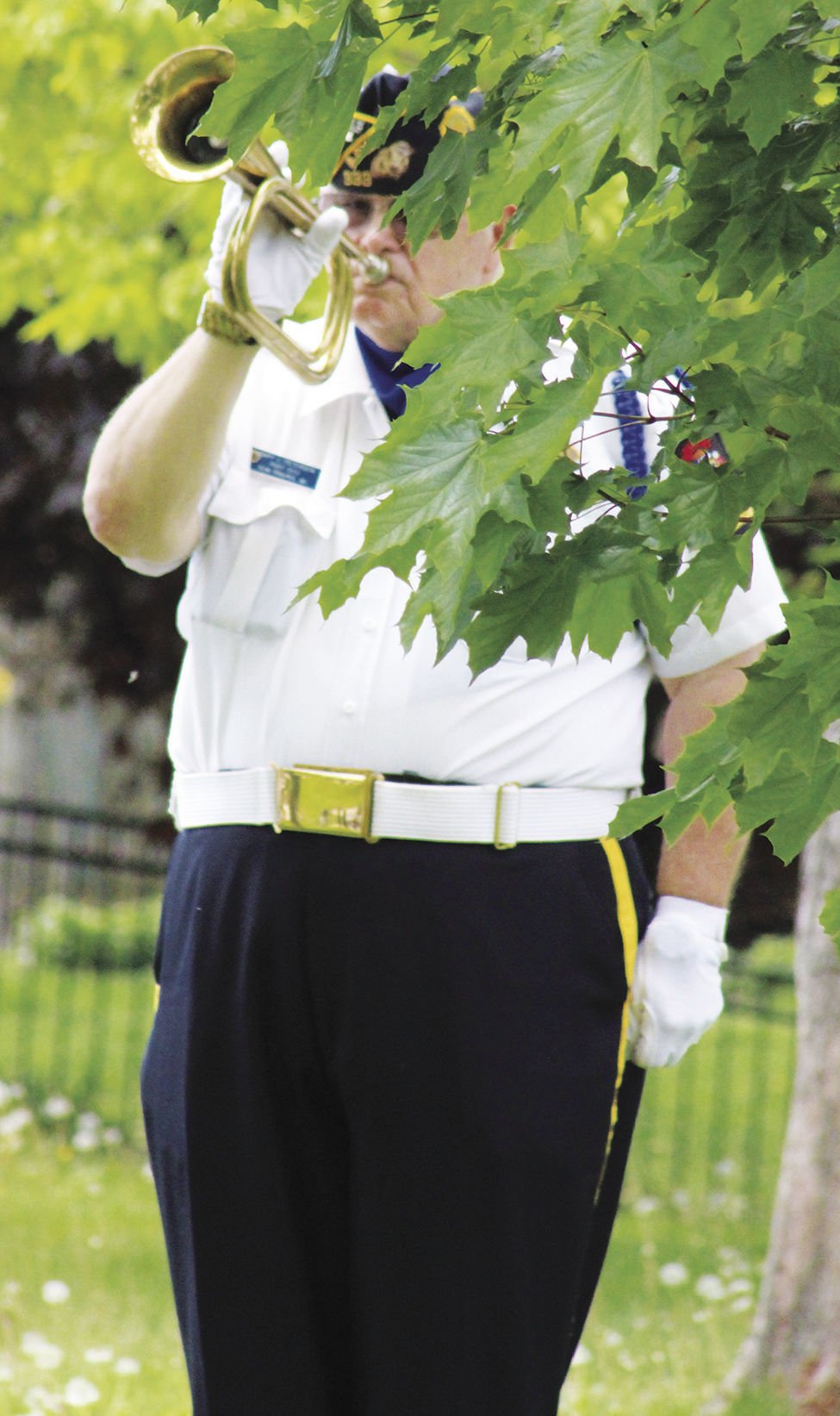 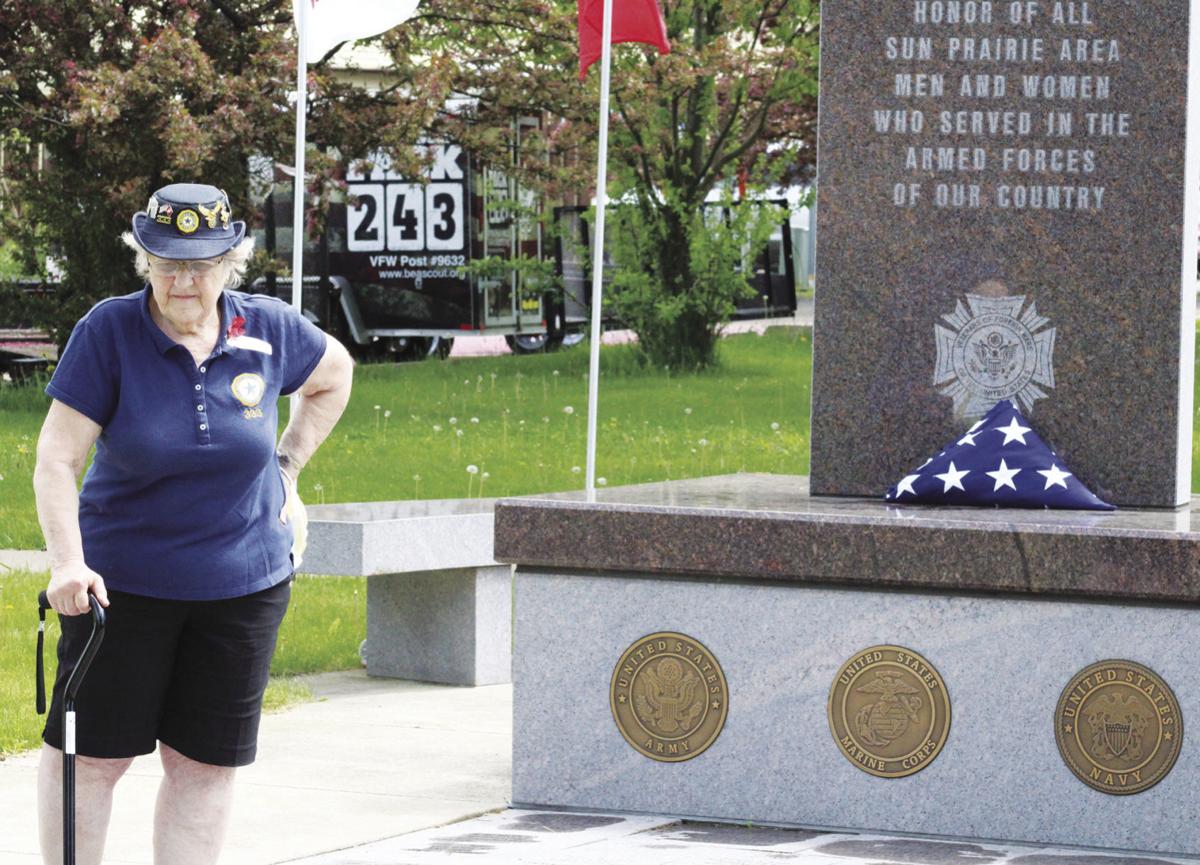 Char Pulham from American Legion Auxiliary Unit 333 looked down at the pavers at the Sun Prairie Area Veterans Memorial on May 25 following the conclusion of the Sun Prairie Memorial Day Ceremony at the memorial.

Dennis Norton from VFW Post 9362 read the names of service members from Sun Prairie who died during wartime service as part of the Monday, May 25 Memorial Day Ceremony at the Sun Prairie Area Veterans Memorial.

Char Pulham from American Legion Auxiliary Unit 333 looked down at the pavers at the Sun Prairie Area Veterans Memorial on May 25 following the conclusion of the Sun Prairie Memorial Day Ceremony at the memorial.

Dodging showers and trying to beat the climax of temperatures predicted to be in the 80s, the combined American Legion Post 333-VFW Post 9362 Memorial Day ceremony on Monday, May 25 at the Sun Prairie Area Veterans Memorial saluted veterans who lost their lives during military service.

A scaled down version of what normally would take place at the memorial, the ceremony included only remarks from Daryle Pasquan, a laying of a ceremonial wreath on the memorial, and a reading of names of Sun Prairie’s war dead.

“The willingness of America’s veterans to sacrifice for our country has earned them our lasting gratitude,” Pasquan said. “And a court cannot repay the debt we owe these men. Surely with our actions, we must strive to keep faith with them and with the vision that led them to battle and to final sacrifice.

“We believe our flag is more than just cloth and ink — it is a universally recognized symbol that stands for liberty and freedom,” Pasquan said. “It is a history of our nation. It’s marked by the blood of those who died defending it.

“Patriotism is not short and frenzied outbursts of emotion,” Pasquan said, “but the tranquil and steady dedication of a lifetime.”

Among those names were Harry Assovsky and Ervin Blatterman, who were the subject of a recent entry in the American Legion Post 333 newsletter.

Post 333 Historian Bev Marchant recalled both died not of wounds suffered in World War I, but of the Spanish flu that has eerie similarities to the COVID-19 virus.

“Harry Assovsky died Sept. 28, 1918, at the Naval Training Station Great Lakes in Illinois. He was buried in the family plot in Milwaukee. Around Sept 8, 1918, a few sailors had become sick at Great Lakes, where the Naval Station had about 45,000 to 50,000 sailors,”Marchant wrote.

The flu spread into Chicago. Two sailors from Great Lakes who were ill went to Milwaukee and started the flu there and then it spread to Madison.

“The Assovsky family came from Milwaukee and David and Rose Assovsky had a store in Sun Prairie. Harry had a younger brother Charles and a sister Anne. Charles was a member of the Student Army Training Camp (SATC) at UW Madison. The family later went back to Milwaukee. Charles was an alumni of Sun Prairie High School. The name Assovsky was later changed to Ashley and Charles Ashley gave land that became known as Ashley Field at the high school which was dedicated in 1953,” Marchant added.

“Ervin Blatterman died Oct. 6, 1918, at Camp Sherman in Ohio. He had been drafted six weeks earlier into the Army. He was the youngest in the family. Ervin Blatterman also lost a cousin in that time frame from Minnesota due to the flu at Camp Grant which was in Rockford, Ill. Ervin is buried at the Sun Prairie City Cemetery. The spread of the flu from the troop ships in September 1918 on the east coast spread fast westward to naval stations and camps . . .

“So it is hard to believe that some 100 years later, we are reliving some of that history,” Marchant concluded. “Sun Prairie lost two to the Great War — Elmer Peterson and Arthur Goecks — and the two above to the flu. I myself lost a great uncle in 1919 to the flu and another distant relative to the war. So let us honor all of our fallen.”