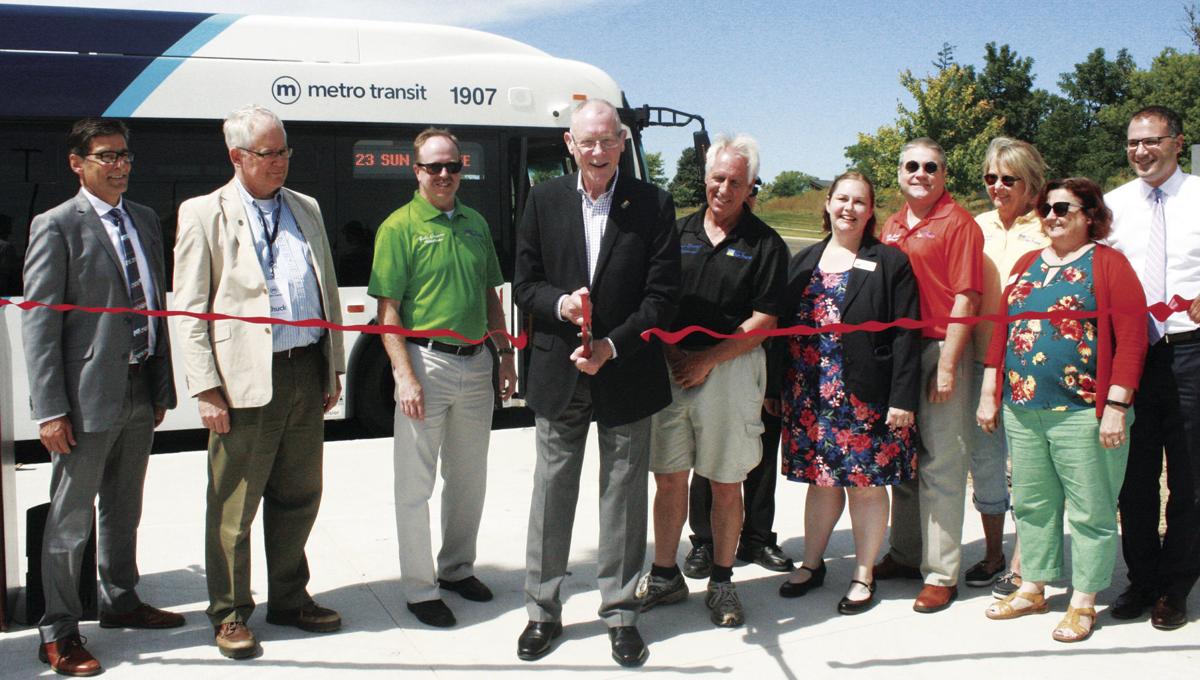 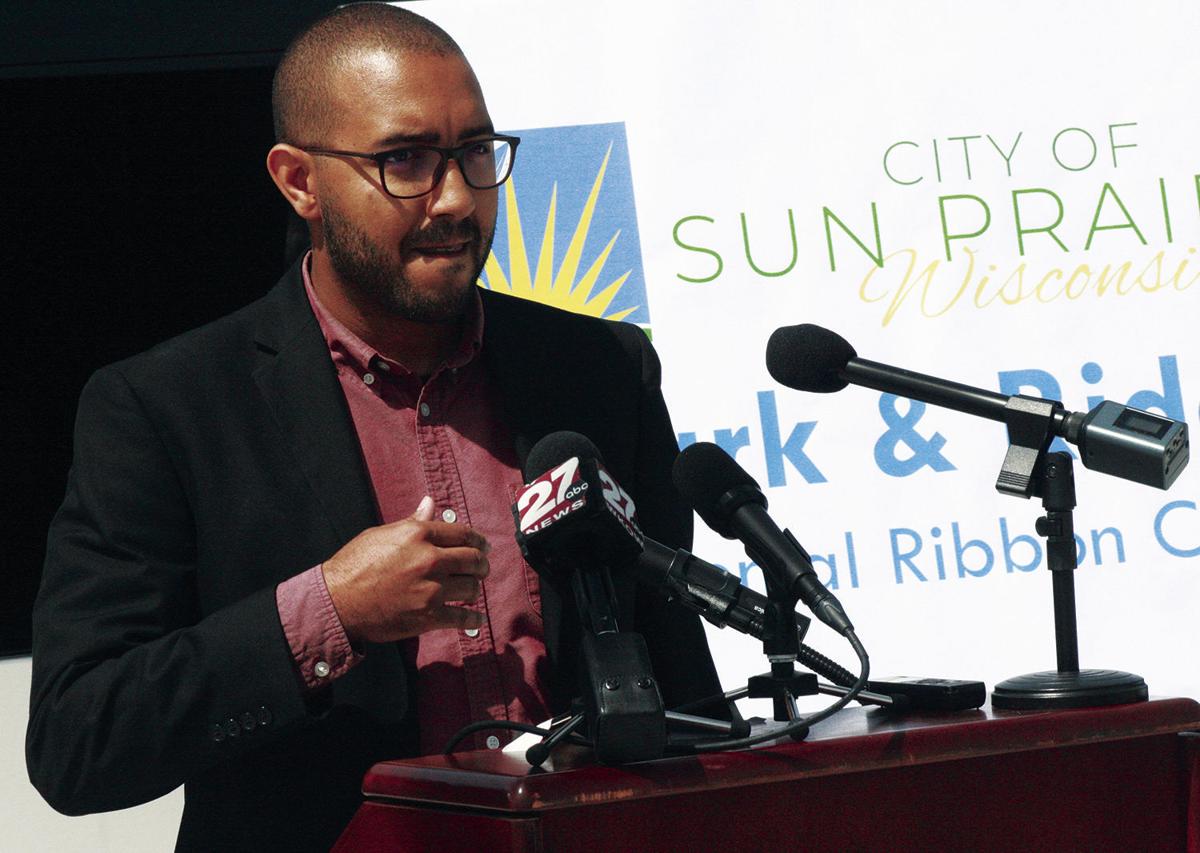 Sun Prairie City Planner Philip Gritzmacher served as master of ceremonies for the Aug. 30, 2019 ribboncutting ceremony to officially open the Sun Prairie Park and Ride near the corner of O’Keeffe Avenue and Reiner Road. 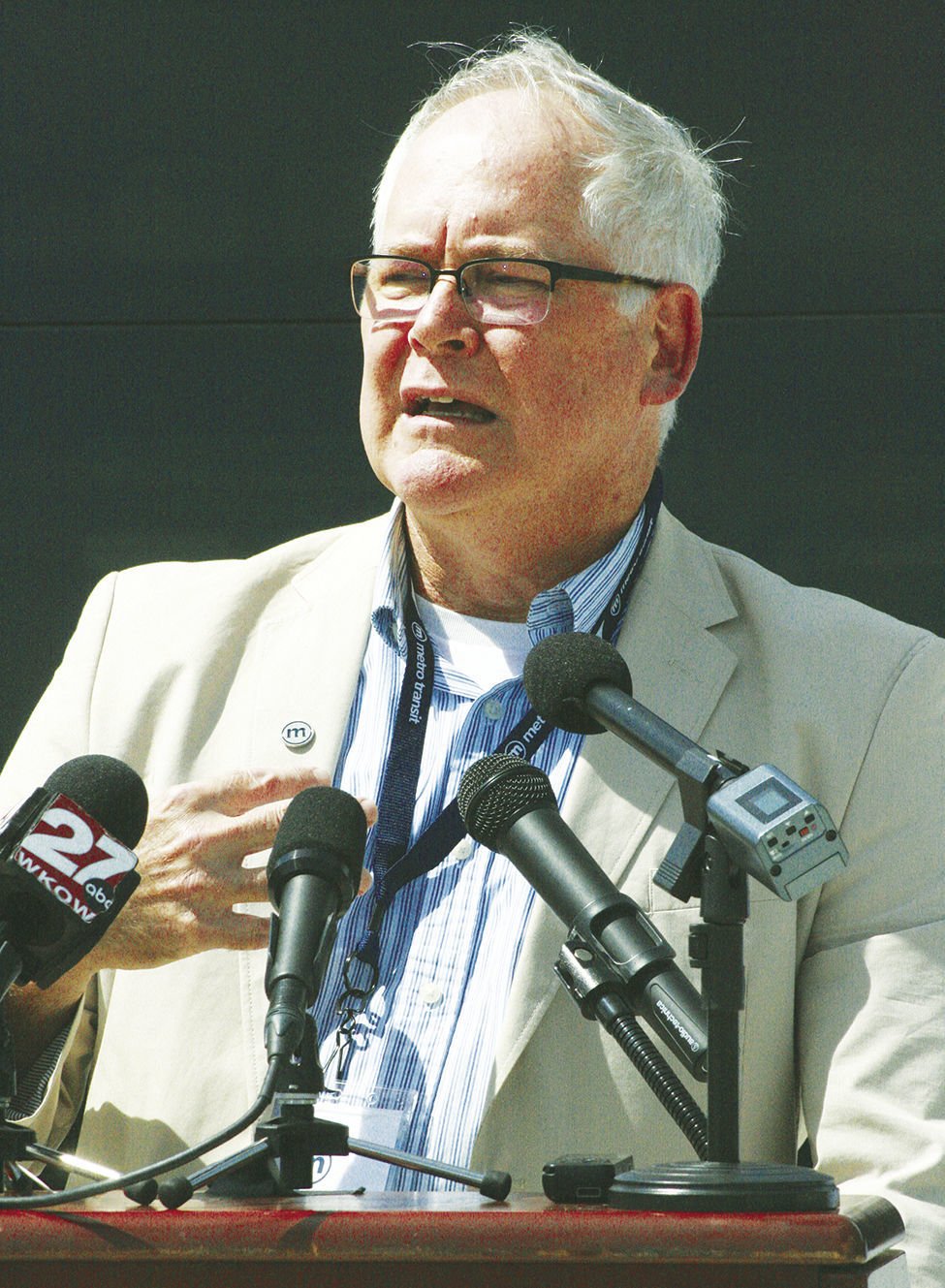 Metro Transit General Manager Chuck Kamp was among the speakers during the Aug. 30, 2019 ribboncutting for the new Route 23 serving Sun Prairie from the new Sun Prairie park and ride at Reiner Road and O’Keeffe Avenue. 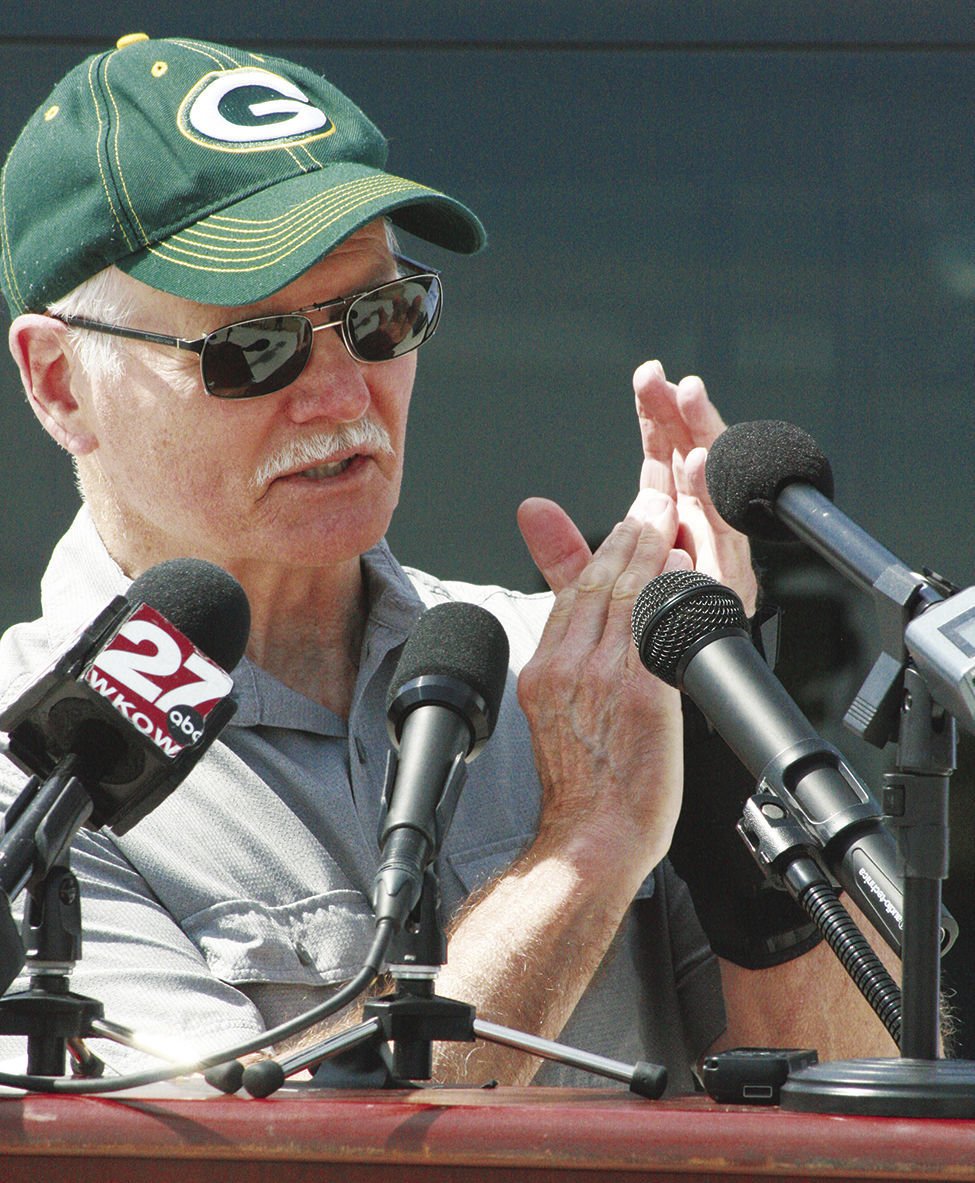 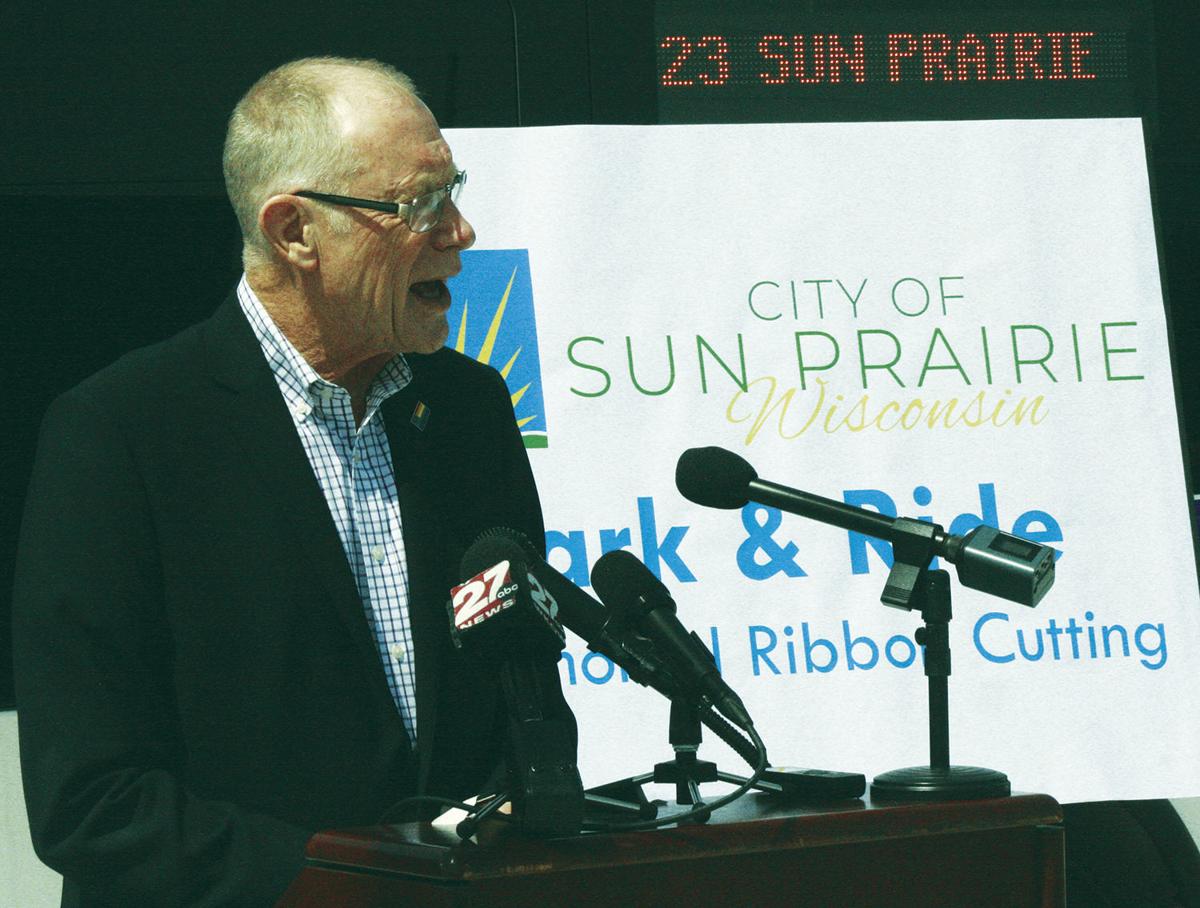 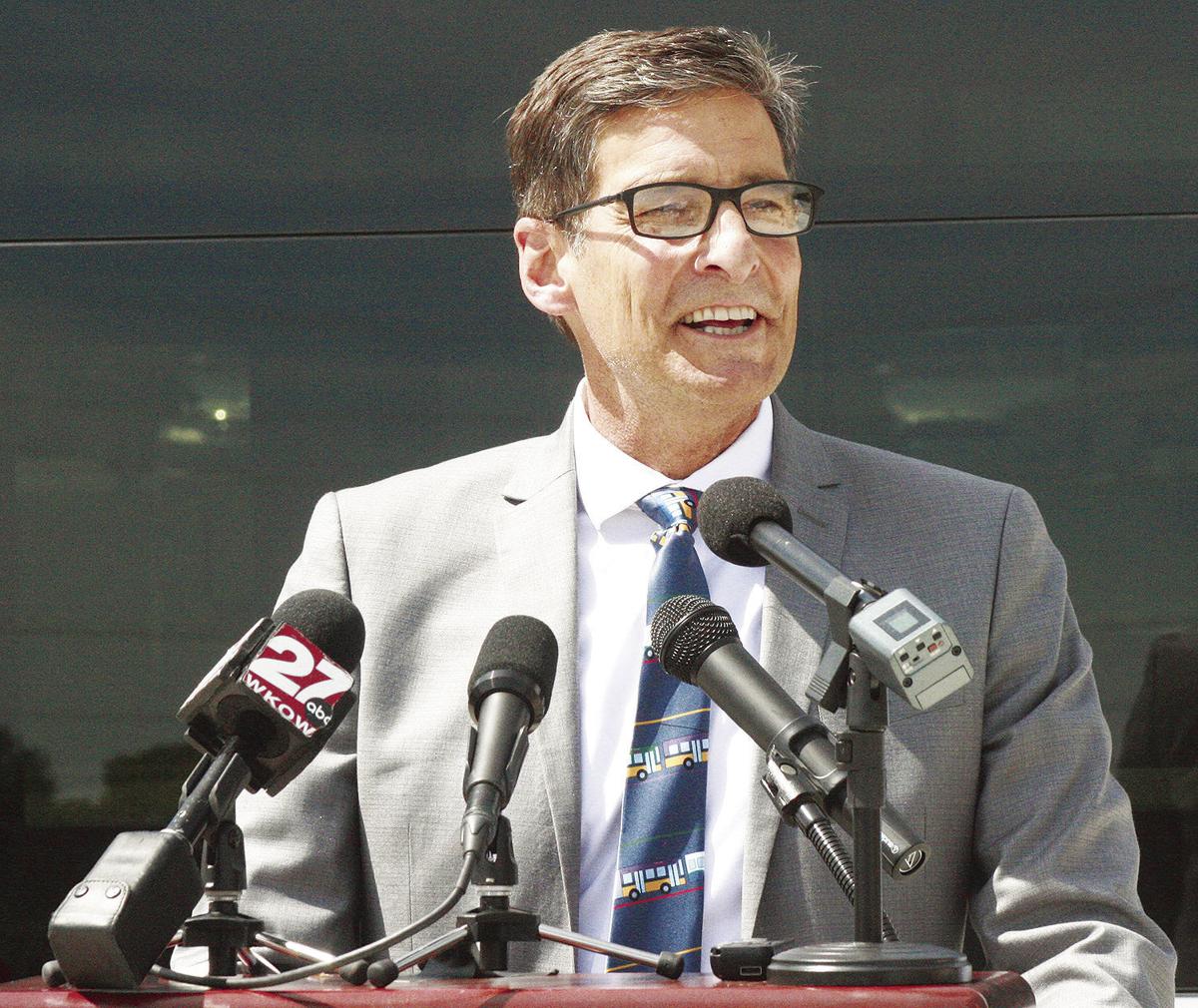 City of Madison Transportation Manager Tom Lynch, during his Aug. 30 remarks, viewed the Metro Transit ribboncutting as part of a solution to a regional approach to transportation issues. 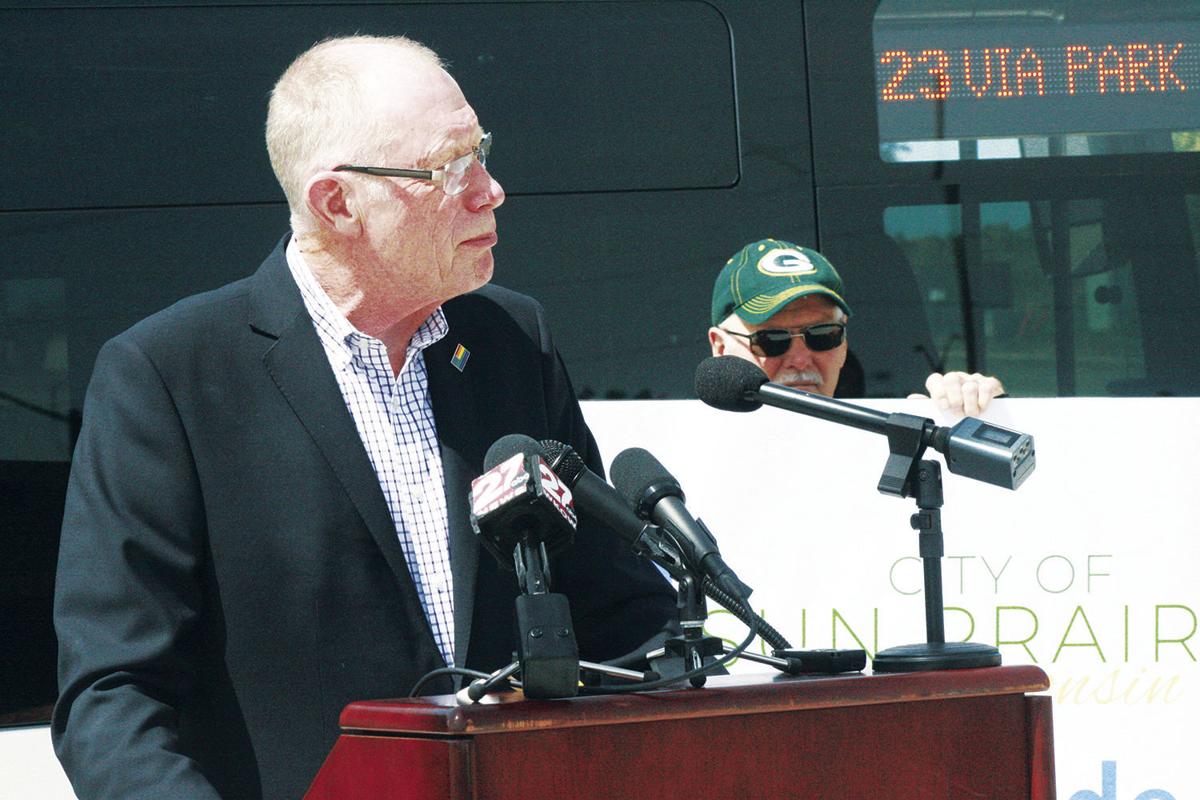 Sun Prairie City Planner Philip Gritzmacher served as master of ceremonies for the Aug. 30, 2019 ribboncutting ceremony to officially open the Sun Prairie Park and Ride near the corner of O’Keeffe Avenue and Reiner Road.

Metro Transit General Manager Chuck Kamp was among the speakers during the Aug. 30, 2019 ribboncutting for the new Route 23 serving Sun Prairie from the new Sun Prairie park and ride at Reiner Road and O’Keeffe Avenue.

City of Madison Transportation Manager Tom Lynch, during his Aug. 30 remarks, viewed the Metro Transit ribboncutting as part of a solution to a regional approach to transportation issues.

During a ceremony where District 4 Alder Al Guyant performed double duty as a sign holder and a speaker, the City of Sun Prairie on Aug. 30 officially cut the ribbon for Metro Transit Route 23 and an accompanying park and ride lot at Reiner Road and O’Keeffe Avenue.

Esser noted the event was more than just the ceremony to open the park and ride lot, which was a pile of dirt about a week before the ceremony and was converted to a parking lot just in time for service to begin Aug. 26.

“Actually, there is so much more going on here and I want to tell you about that. There are some things that you ought to hear about,” Esser said.

“First of all, for Sun Prairie, this is the start of something we’re absolutely going to need in our future. In the future of these communities in Dane County, like Sun Prairie and like Madison, we’re not going to be able to continue to rely on people getting about by their personal vehicles,” the mayor added. “The roads are simply going to get too crowded and it is not going to work. We need transit service like this.

“So what we’re doing here today is not only celebrating the beginning, we are literally touching the future of Sun Prairie when you look at that bus,” Esser said, pointing to the Metro bus parked just behind him. “This bus service is an economic matter for us — an economic development matter, because it will enable people to get out to Sun Prairie, to work, shop and recreate as well as people from Sun Prairie.”

At that point in Esser’s remarks, the sign blew off its stand, but Guyant grabbed it and held it up as Esser continued his remarks.

“Sun Prairie has transportation challenges based on affordability. There are people in this community that cannot afford transportation and we need to have access to a system like Metro Transit in order to provide that transportation need,” Esser said.

“So Route 23, the route that is coming out here, isn’t simply the end of our transportation reach. In fact, it is merely the beginning. We intend to build upon what is being started here today,” Esser said. “This event today comes about because of joint cooperation between Madison and Sun Prairie. It comes about because the leaders in both communities believe the people of our communities are better served when we work together.”

“The future of Sun Prairie owes you a debt of gratitude,” Esser told Gritzmacher and Guyant. “I told you you’d never get a plaque or a proclamation from this, but you will go down in the future as being instrumental to the future growth and development of Sun Prairie.”

Lynch had a different view.

“We see the growth every time we drive down the road. Right now, Dane County is projected to get another 100,000 people — another 85,000 jobs by 2050 — and so that is going to produce about 800,000 new trips daily. To keep that in perspective, East Washington Avenue carries 50,000 trips daily. So those are the type of transportation challenges that we as a region are going to be facing,” Lynch said.

“And the thing about it is that a job, whether it’s in Sun Prairie or Madison, or a house, whether it’s in Sun Prairie or Madison, causes a whole region to thrive, right? We’re really in this together and because we’re in this together, we need to work on the transportation challenges together,” Lynch said. “That’s why these cooperations, these partnerships that Metro has with Sun Prairie and Fitchburg and Middleton and your partnership with us are so important, because we need to address it together.”

“Metro Transit is a regional system. And every time we have a sense that we’re improving our regional service, we feel we’re providing better service to the community,” remarked Metro Transit General Manager Chuck Kamp. “And for those of us who are in the nuts and bolts of public transportation, this is why we got into public service to help individuals lead more productive and more satisfied lives.”

Kamp relayed a story about a Sun Prairie resident who works at an apartment complex in Madison who asked about Route 23.

“And this employee . . . has been walking over an hour to get to our nearest bus and now lives by a bus stop on Route 23 and will be able to get to his job back and forth,” Kamp said. “I need to just share with you that the reason I’m in this job and love it passionately is because I get to hear stories like that.”

But now, Guyant noted, the city council has a different view.

“I’m chair of the Transit Commission as well as an alder and I promise you, within a year, we will bring forth expansion options to the council, and working with Metro, so we are ready to expand to more citizens, particularly those who aren’t able to drive,” Guyant said. “And when Metro is ready, we’re going to be ready.”

With the start of Metro Transit Service, the City of Sun Prairie is selling Metro passes at:

• At the Sun Prairie Parks, Recreation and Forestry office, located on the second floor inside the Westside Community Service Building at 2598 W. Main St.

A consignment agreement allows the City of Sun Prairie to receive 1 percent of any Metro sales. In Madison, multi-ride bus passes are sold at a variety of retail locations including grocery stores and gas stations.

While some of these establishments have a presence in Sun Prairie, their locations are not served by the planned bus route.

Multi-ride bus passes provide transit riders with flexibility when paying for their rides. While riders can pay for their ride on the bus, they are limited to paying with cash and must have exact change.

The consignment agreement with the City of Madison and Metro Transit now gives residents the ability to purchase multi-ride bus passes using cash, check, credit, or debit card regardless of whether or not they have exact change.

Paying for rides with multi-ride cards can save residents money. An individual Metro ticket is $2 if paid for at the time of boarding. Multi-ride cards offer a significant discount if utilized frequently for all riders but especially youth, disabled, and senior riders. The agreement allows the City of Sun Prairie to offer these items for sale:

For more information about Metro Route 23, which serves the City of Sun Prairie, go online to https://cityofsunprairie.com/1164/Express-Commuter-Bus-Service.

As a reminder, the city council recently adopted an Ordinance Repealing and Recreating Chapter 10.16 – Parking Regulations Generally to Restrict Parking within Bike Lanes and in front of Public Transit Lanes.

The ordinance prohibits parking in bus stops and in bike lanes.