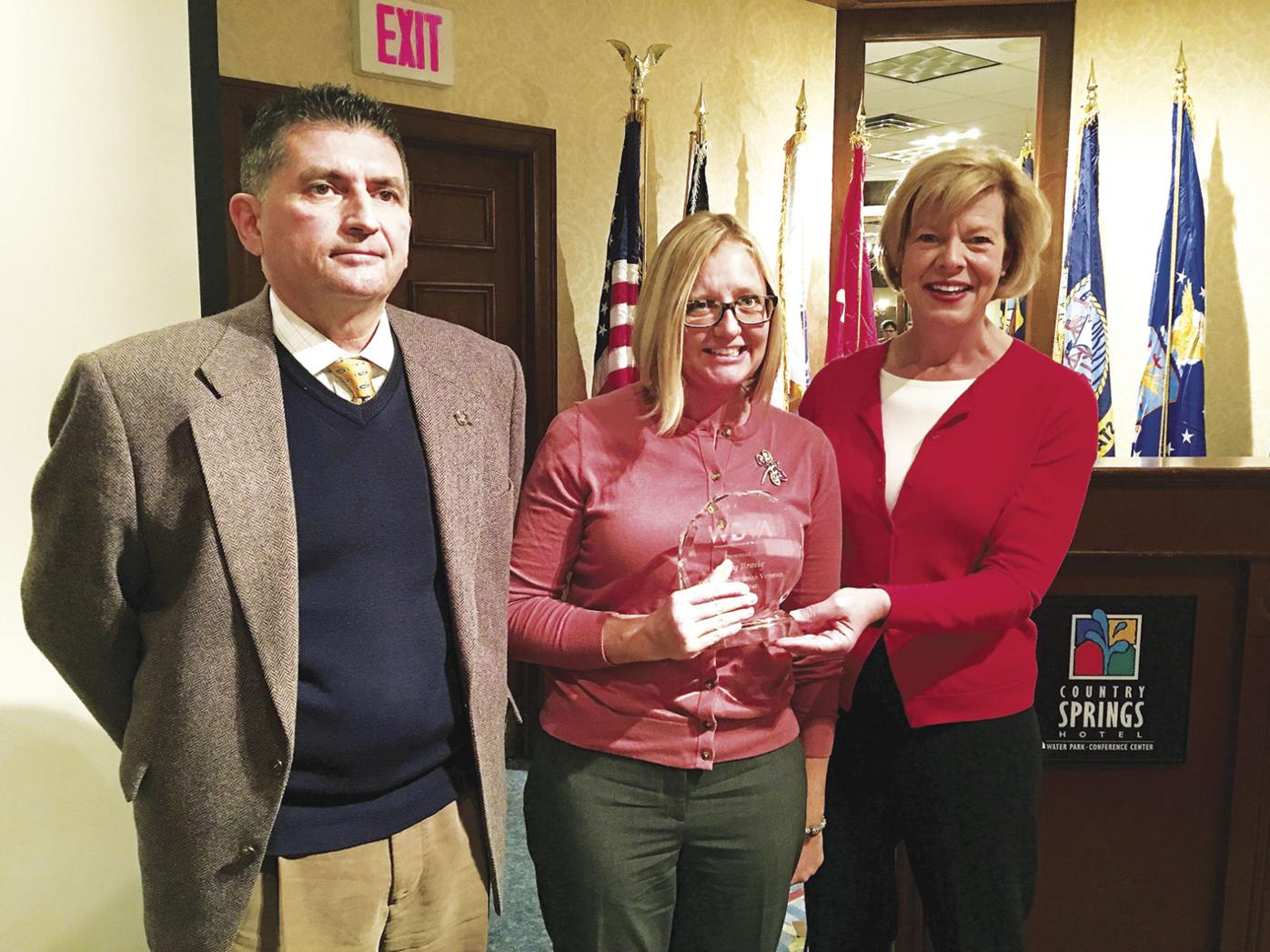 Wisconsin Department of Veterans Affairs (WDVA) Secretary John A. Scocos (left) and U.S. Sen. Tammy Baldwin presented the Wisconsin Woman Veteran of the Year award to Cindy Brosig of Sun Prairie. Brosig (center), a US Air Force veteran, used her GI Bill benefits to get a master’s degree in nursing with an emphasis on animal-assisted therapy. 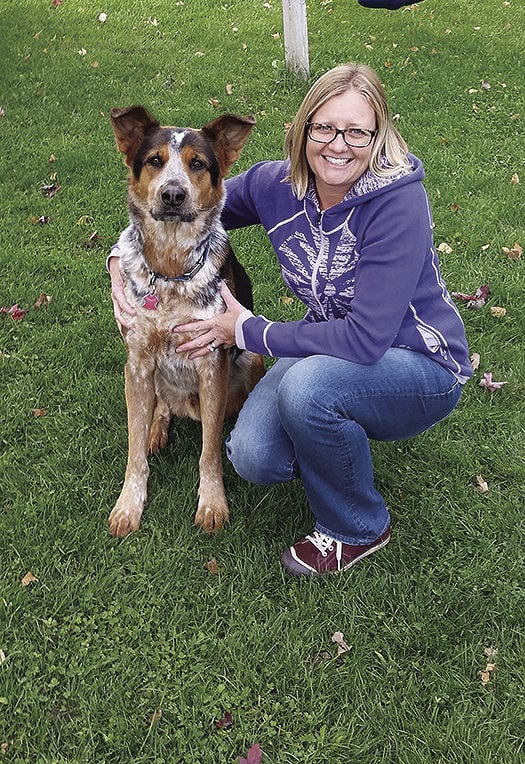 Wisconsin Department of Veterans Affairs (WDVA) Secretary John A. Scocos (left) and U.S. Sen. Tammy Baldwin presented the Wisconsin Woman Veteran of the Year award to Cindy Brosig of Sun Prairie. Brosig (center), a US Air Force veteran, used her GI Bill benefits to get a master’s degree in nursing with an emphasis on animal-assisted therapy.

A desire to serve was behind Cindy Brosig’s decision to become an Air Force nurse.

And as a veteran, she hasn’t stopped. Brosig now advocates for military families and children and has started a program to make animal therapy accessible to them.

For her work, the Sun Prairie resident won the Wisconsin Woman Veteran of the Year Award on Oct. 13 from the Wisconsin Department of Veterans Affairs (WDVA). U.S. Sen. Tammy Baldwin presented the award along with WDVA Secretary John A. Scocos.

Brosig graduated from UW-Milwaukee in 1994 with a nursing degree and then joined the USAF Nurse Corps. Though she originally enlisted for four years, Brosig said she loved serving her country, and in total stayed in the military for eight and one-half years.

Brosig went through officer training school in Montgomery, Ala., along with other medical professionals. She said she enjoyed working with others for the same purpose.

“It didn’t matter where you came from,” she said. “It was all based on rank because we all came in as officers. Whether you were from Alabama [or] Wisconsin, we were all there for one purpose.”

Her first assignment was in San Antonio, where she said treating victims of gang violence gave her training for trauma. After that, she went to Panama, where she was the clinical nurse for the Howard Air Force Base, helping transition it into a clinic that was transferred to the people of Panama.

And then she went to Germany, where she was the charge nurse of a contingency ward at Landstuhl Hospital in Germany. She helped care for 19 sailors wounded in the USS Cole explosion, a 2000 terrorist attack against a U.S. Navy vessel while it was refueling in a Yemen harbor.

While in Panama, Brosig met her future husband, Max. They continued to date while she was in Germany and he was stationed in Arizona. In 2000, the couple took a week of leave to return to Wisconsin to get married.

“We had a quick three-day honeymoon in Door County,” Brosig said. “And I went back to Germany, he went back to Arizona, so we lived separately for another year and a half.”

And then they were both stationed in Hawaii – “which sounds glamorous but when you’re working in the military, 12, 13-hour shifts, we barely got out,” she said.

Max Brosig was then offered a job in Madison, where he serves as a lieutenant colonial for the Army National Guard. Brosig was pregnant with her son, Jake, and there was no Air Force base nearby where she could work. So in 2003, she elected to end her Air Force tour, finishing as a captain in the USAF Nurse Corps.

Brosig said the transition was difficult. “It was hard because I was fighting going from this upbeat military life to being a stay-at-home Mom, which isn’t bad -- it was just different,” she said.

Brosig didn’t know anyone in Madison, and her husband had long deployments overseas – he saw his daughter, Ruth, right after she was born, and was deployed to Kosovo for 18 months.

Sometimes for days, he would be unable to contact his wife. And when he could reach a phone, it was often at odd hours of the day, because of the time zone difference. “I would get a call and I’d be afraid to pick the phone up,” Brosig said, explaining she was worried it would be conveying bad news.

Brosig used the G.I. Bill to earn her Master’s Degree in nursing with an emphasis in animal-assisted therapy. She said her experiences are colored by her own experiences serving, and as the wife of a military member. In addition, her sister, Major Nancy Lester, is an active duty member of the air force and has served three combat tours oversees.

Brosig said she relied on her dog, Aggie, for comfort through challenging times. For example, after moving to Madison, the sleep deprivation and stress of caring for two children began to wear on her.

Aggie, who had been Nancy’s dog before she enlisted, helped Brosig cope. Brosig said she started having panic attacks, convinced someone was breaking into her house.

“(Aggie would) look at me like, ‘no one’s here. I’d bark if there was someone coming into the house.’” And reassured by her dog, Brosig said she would calm down.

As part of OP H.E.E.L., she volunteers to do Assisted Animal Activities with groups of children and does school visits upon request, to provide support to military children. She uses her trained therapy dog, Ted, a rescued German Shepherd/Coonhound mix.

Brosig said dogs give unconditional affection. She points to research about how exposure to animals can decrease anxiety in both the human and canine.

She’s also an advocate for veterans, and emphasizes the importance of connecting them to resources, especially female veterans – there are 38,000 female veterans in the state of Wisconsin.

Brosig is a Community Advocate for the Have You Ever Served in the Military campaign, created by the American Academy of Nurses and the Joining Forces campaign.

Brosig stressed the importance of supporting families -- especially military families that don’t live near a military base, because they need support from within their community, she said.

Though Brosig said military children are often resilient, they can be heavily impacted by their parents’ deployments. According to a study from the Madigan Army Medical Center, one-third of military children show behaviors such as being anxious, worrying often or crying more frequently than their peers.

And, she said, helping families impacts deployed military members, who worry about their families back home. When wounded sailors from the USS Cole came to the German hospital, for example, their families were on their minds. “All of them said, ‘Please let my family know that I’m OK’ before they wanted any treatments,” Brosig said. “… Their first words were always, ‘my family, my family’ and I feel like that’s what got them through.”

Editor's note: This article was updated Nov. 2 at 2:26 p.m. to clarify that the Wisconsin Woman Veteran of the Year award was from the Wisconsin Department of Veterans Affairs, and state Sen. Tammy Baldwin joined in presenting it.