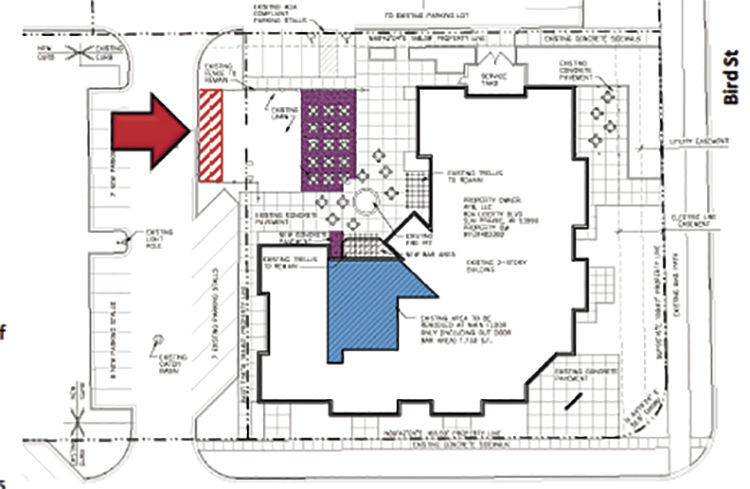 The red arrow points to the fenced area on the outdoor patio at Buck & Honey’s, 804 Liberty Blvd., where the new stage is to be located. The purple area denotes new seating planned for the patio. The space where the current outdoor stage is located will be filled with tables and chairs for additional seating. 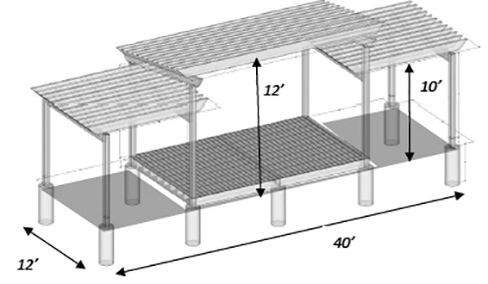 This diagram shows the design and dimensions of the stage to be constructed at Buck & Honey’s, located at 804 Liberty Blvd.

The red arrow points to the fenced area on the outdoor patio at Buck & Honey’s, 804 Liberty Blvd., where the new stage is to be located. The purple area denotes new seating planned for the patio. The space where the current outdoor stage is located will be filled with tables and chairs for additional seating.

This diagram shows the design and dimensions of the stage to be constructed at Buck & Honey’s, located at 804 Liberty Blvd.

The restaurant — which has a large outdoor patio near its parking lot — requested approval of the amendment to to install a new outdoor pergola with stage and seating area.

The new structure will replace an existing stage and seating area on the patio for Buck & Honey’s which is located at 804 Liberty Boulevard. When the new stage is finished, tables and chairs will be placed in the current stage area to provide additional seating.

A staff report from City Planner Sarah Sauer indicates the structure will be located within an existing fenced in grassy area northwest of the existing building. The area is used mostly for picnic tables with some corn hole beanbag play.

The new stage is being constructed because musical entertainers on the current stage are staring directly into the sun, making it difficult to see until after sunset. The exposure to the sun also results in hot conditions for musicians.

The new center stage area is roughly 240 square feet and set six inches off the ground, and creates a shaded area for performers.

Additional 10’ x 12’ seating areas are planned on each side of the stage at ground level.

Acting on an approval recommendation, the commission voted unanimously to recommend council approval of a Final Plat of “The Reserve First Replat,” which re-plats 26 existing lots into 23 larger lots and release and re-create easements in all impacted parcels.

City Planner Philip Gritzmacher Jr. wrote in his staff report that — in addition to the reconfiguration of 26 existing lots — applicant Elsing Development Company will vacate and release five public utility easements in order to re-dedicate them with the proposed re-plat.

The proposed re-plat will maintain existing SR-4, low density residential zoning. The applicant has indicated that the large parcels will better meet market demands within the neighborhood.

“The proposed plat does not reconfigure the transportation network or impact any city-owned lands,” Gritzmacher wrote in his report. “In staff’s judgement, the impact of the reconfiguration of the parcels will have minimal impact on the overall platted area.”

One concern remains: the location of cluster mailbox units. Gritzmacher said the city has contacted the US Postal Service to see whether CBUs would be needed if the re-plat is approved, because they were not required when the first plat was approved.

Acting on a recommendation from Gritzmacher, the commission recommended council approval of a PIP amendment to change a playground area from sod to artificial turf, modify the location of fencing, and relocate signage at the Goddard School, located at 2550 Jenny Wren Trail.

The amendment will also result in the removal of all landscaping and fencing from the 42-foot Highway 151 setback, as required by the Wisconsin Department of Transportation.

“Because construction of the facility is under way and space for landscaping in the rear of the site is now restricted, the applicant is seeking a variation from the landscaping requirements associated with the site,” Grtizmacher wrote. “In staff’s judgment, the request is appropriate considering the physical constraints associated with the rest of the site. It is unlikely that landscaping requirements could be met without significant modification to the site. Further, as viewed from the Smith’s Crossing neighborhood, landscaping appearances would remain unchanged.”

Mayor Paul Esser praised and thanked City Planning Director Tim Semmann, who is departing the city to become Director of Community Development in the Village of Waunakee. His last day with the City of Sun Prairie is Friday, June 11.

Semmann thanked the mayor for the kind words. “It’s been a pleasure working here,” he said.

Semmann previewed a lengthy potential agenda for the commission’s July 13 meeting — leading to some speculation that a second meeting may be needed on July 27.

Two of the items — a certified survey map and annexation petition — are connected with the proposed new headquarters for Quarra Stone in the Sun Prairie Business Park.

Other items include a PIP for Children’s Dental Center of Madison in the Grand on Main development; a conditional use permit (CUP) for Reach Dane to operate a daycare center at 802 Windsor St.; a rezoning request from the Sun Prairie Area School District for lands located near Sun Prairie West High School; a CUP to convert the vacant spaces in Catalyst on Main to live-work units; an amendment to allow and a request to locate indoor storage in the West Prairie Village neighborhood; and a concept plan for a residential development on the southeast corner of North Bird Street and Egre Road; among others.