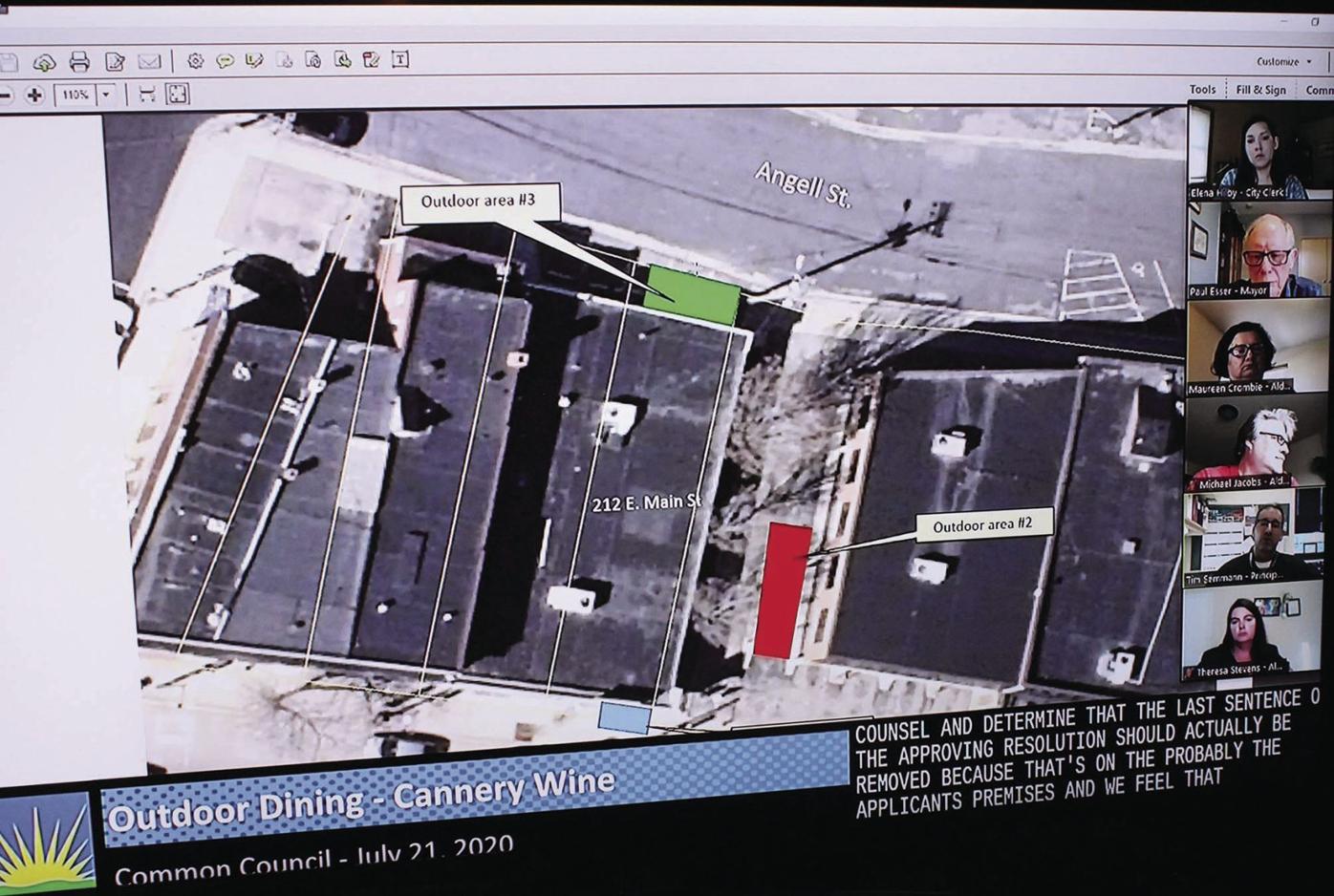 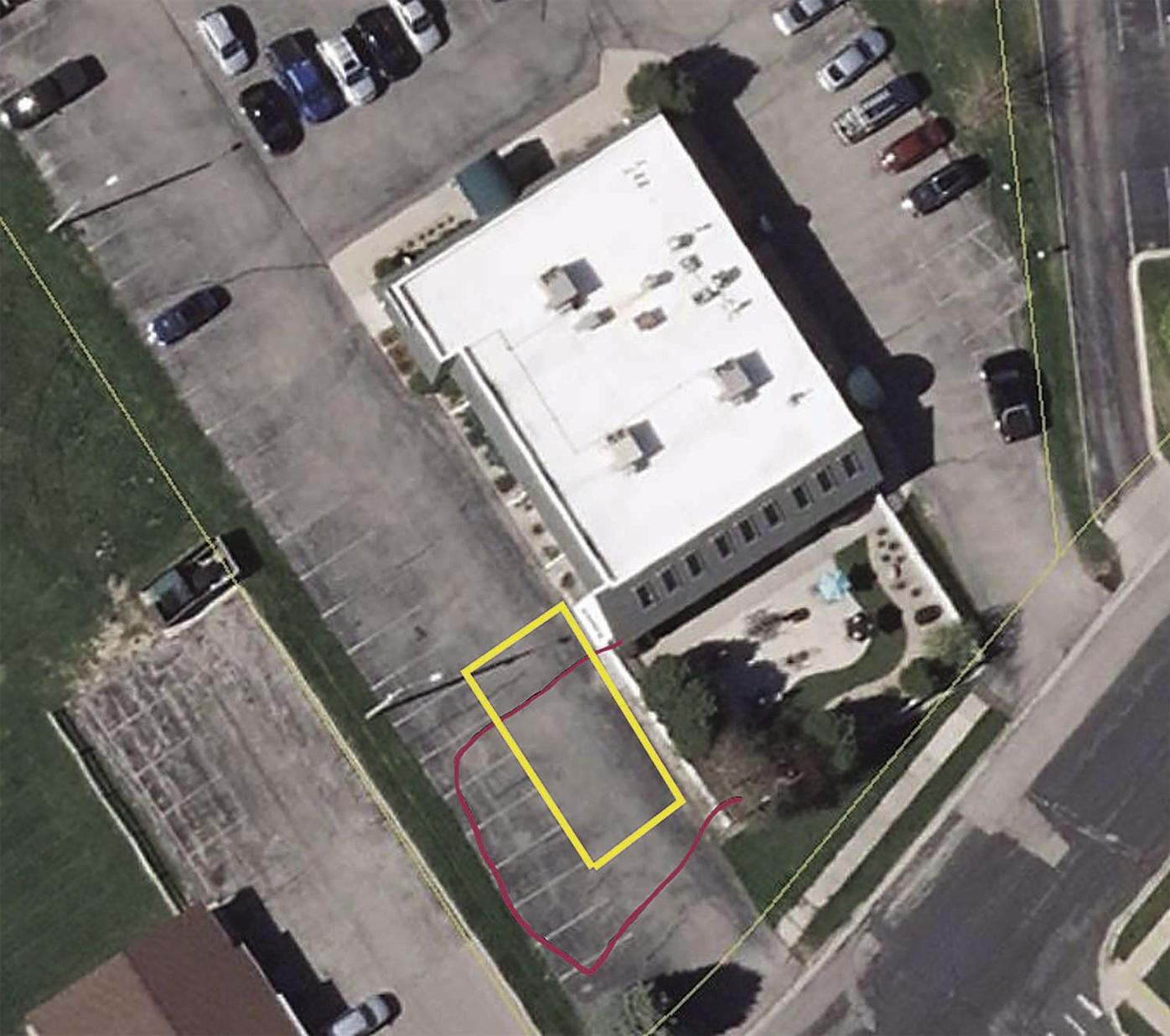 Daly’s Bar & Grill, 1086 Emerald Terrace, will expand its seating capacity into a portion of its parking lot in the yellow-outlined area, not the pink area it had sought, as part of the city’s “streetery” program that allows bars and restaurants to expand outdoor seating offerings for patrons in response to COVID-19 indoor seating restrictions.

Daly’s Bar & Grill, 1086 Emerald Terrace, will expand its seating capacity into a portion of its parking lot in the yellow-outlined area, not the pink area it had sought, as part of the city’s “streetery” program that allows bars and restaurants to expand outdoor seating offerings for patrons in response to COVID-19 indoor seating restrictions.

While some qualified Sun Prairie establishments have been slower to respond than others, two Sun Prairie businesses received approval to receive with their “streetery” efforts.

On June 16, alders passed an emergency order allowing for the relaxation in the standards and limitations for outdoor dining in an effort to help local small businesses weather the COVID-19 pandemic. The order allowed for a staff review of outdoor dining facilities that do not include sales of alcoholic beverages. For requests from facilities that would include the sale of alcoholic beverages, a temporary revision of the establishment’s liquor license is required to extend the premises to the outdoor dining area.

Further, review by the city’s Planning, the City Clerk, and police departments is required as well as approval by the Sun Prairie City Council.

Cannery proposed three separate outdoor areas as part of this request. According to the Clerk’s review of the proposal, seating area #2 is on an adjacent lot; although both premises – Cannery and seating area #2 — are owned by the Bank of Sun Prairie. According to consultation with a Wisconsin Dept. of Revenue field agent, the license for the premise can only be extended to include areas owned/leased/controlled by the licensee. In this case the licensee is Cannery Wine Bar and Tasting Room.

District 1 Alder Steve Stocker asked about liability insurance, which was needed to use the city’s property.

City Planning Director Tim Semmann said he was unsure about whether the applicant knew that or not.

But alders approved the seating areas contingent upon the provision of liability insurance that is approved by City Attorney Mark Leonard.

Regarding the Daly’s proposal, a staff review approved the installation of temporary barricades in an area of the parking lot located on the western side of the building adjacent to an already established seating area.

Acting on a recommendation from Director of Public Services/City Engineer Adam Schleicher, alders approved a $19,430 budget amendment to pay for repairs to the Smith’s Crossing multi-modal path and repairs to the Derby Drive storm sewer.

A memo from Schleicher to City Administrator Aaron Oppenheimer said a portion of multi-use path in the Smith’s Crossing neighborhood between Don Simon Drive and Sky Blue Drive is in need of replacement. This portion of path borders along an out lot jointly owned by the City and the homeowners association. The repair is due to root intrusion from willow trees located on the out lot to the south. The willow roots have pushed up the path creating a series of raised bumps in the bath creating a safety concern for path users.

After making contact with the homeowners association and the developer, Veridan Homes, the city secured permission to remove the willow trees on the jointly owned parcel. Two contractors currently working on other city projects were contracted to give bids on repairing this section of bike path. Wolf Paving submitted a bid for $19,430, outbidding another contractor by about $3,400.

The second item was undertaken because of drainage in the rear yards along Derby Drive.

According to Schleicher’s memo to Oppenheimer, the City Engineering Department and Building Inspection Departments were contacted in 2019 regarding drainage concerns in the rear yards of Derby Drive.

Residents met with city staff and elected officials regarding the drainage and recent pool construction on a neighboring property. Staff from the City Engineering Department surveyed the area to determine the drainage patters on the block. The area is relatively flat from south to north and drains towards the south. The homes in this block border on two different developments that were constructed years apart. The homes on Katherine Drive, the east side of the block, are set several feet higher than the homes on Derby Drive, which is the west side of the block.

The water in this area does not drain naturally due to improvements constructed in the rear yards and the relatively flat slope of the area. Storm sewer exists in both Katherine Drive and Derby Drive.

The city contacted contractors doing work in the area and received a low bid from A-1 Excavating for $23,673.

To cover the cost of the work on Derby, the council authorized the budget amendment to include a change order on the Buena Vista Drive-Beech Court project where the contractor is currently working. Alders approved both as part of the $19,430 budget amendment and change order.

Acting on a recommendation from the Sun Prairie Plan Commission, alders approved a a Conditional Use Permit (CUP) to allows a new contractor’s office for Bauer-Raether at 931 S. Bird St.

A city staff report noted the site is currently zoned Heavy Industrial (HI) and classified as Industrial in the City’s Comprehensive Plan.

Per City ordinances, group developments are permitted as conditional uses in all zoning districts.

Any land use which is permitted within the applicable zoning district is permitted to locate within a group development.

The office, which is a permitted use in the HI zoning district, is in compliance with the required standards for group developments in the city’s ordinance.

The report said 32 parking stalls will be constructed between the proposed office building and Bird Street.

Approximately half of the stalls will be constructed with the proposed office building, while the remaining stalls are intended to accommodate any future office additions.

Additional parking and loading is provided to the rear of the building, outside of the existing storage building.

The office is accessible off Bird Street from an access drive that currently serves the storage building and existing house.

Acting on an approval recommendation from the Sun Prairie Plan Commission, alders approved a CUP to construct a six-foot high fence in the street-yard setback area at 204 Covington Trail from Balasubrahmanyam Annam for a special needs child at the residence.