The chart shows the top three options considered by the Sun Prairie School Board for student migration and how they scored. Even though Options A and B scored the same, the board chose Option A — a choice one parent argued should not have been made until more parents can provide input into the process. 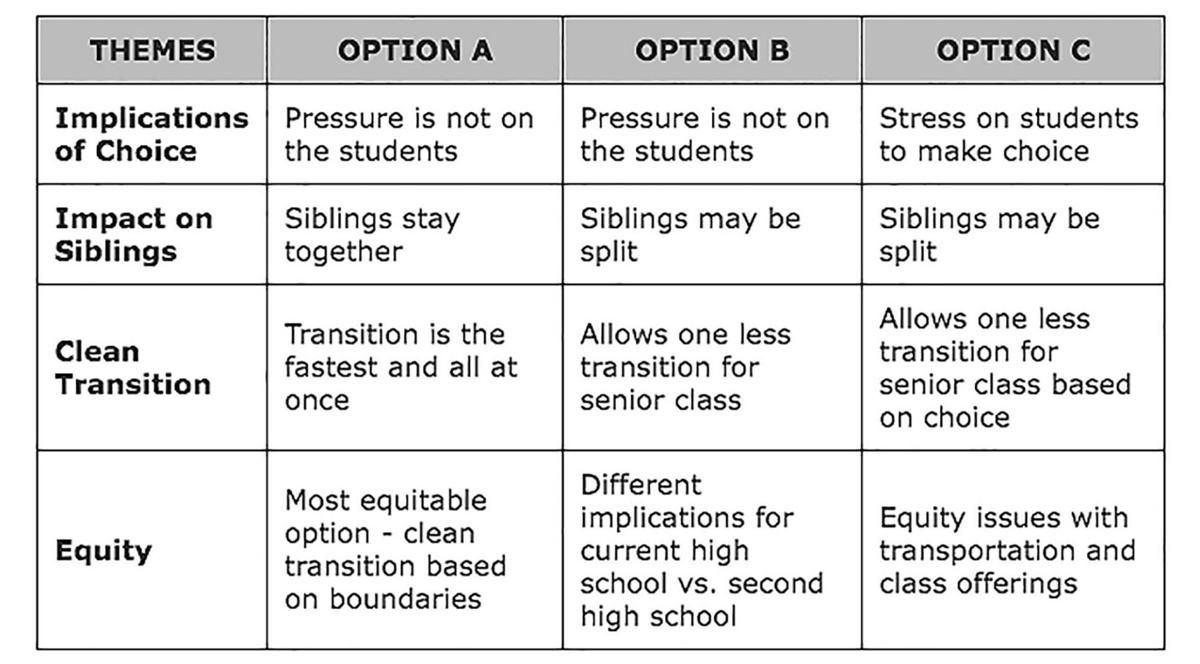 This chart shows the themes associated with Sun Prairie Student Migrations Options A through C. 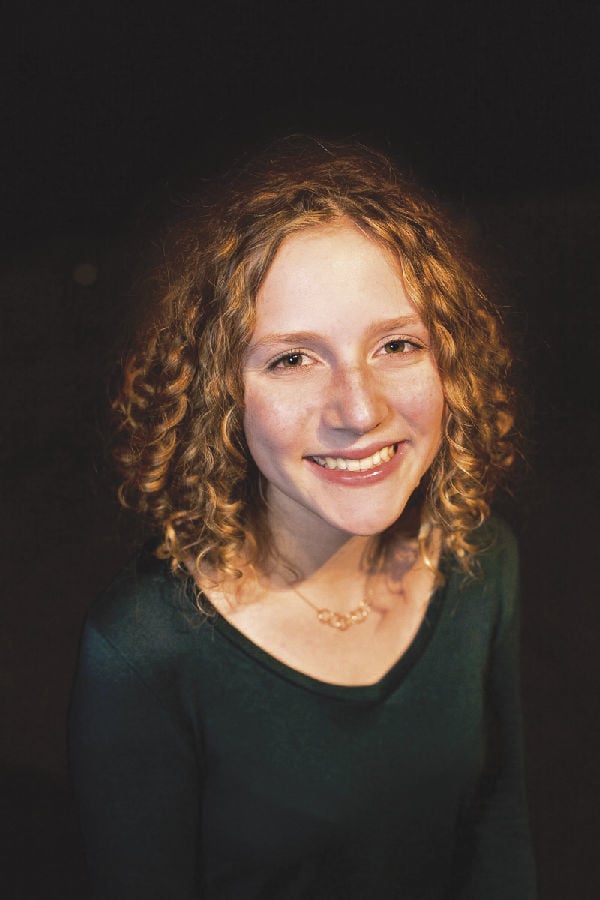 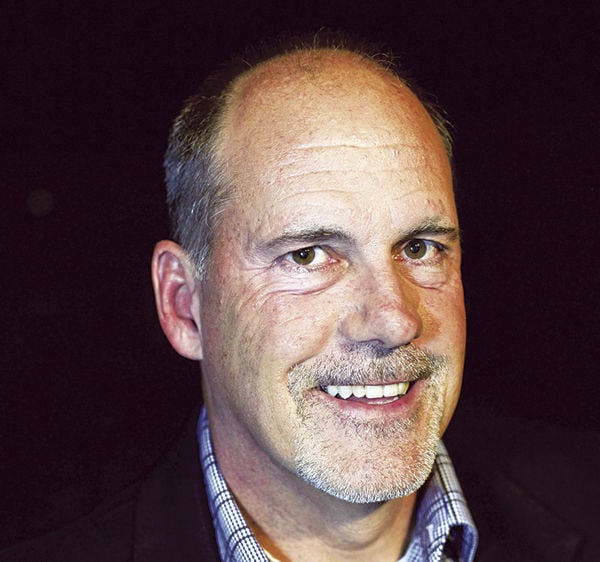 The chart shows the top three options considered by the Sun Prairie School Board for student migration and how they scored. Even though Options A and B scored the same, the board chose Option A — a choice one parent argued should not have been made until more parents can provide input into the process.

This chart shows the themes associated with Sun Prairie Student Migrations Options A through C.

On April 2, 2019, the Sun Prairie Area School District (SPASD) voters approved a referendum to build a second high school, reconfigure Cardinal Heights Upper Middle School (CHUMS) to serve 6th through 8th grades, relocate Prairie Phoenix Academy to a totally separate and dedicated space at the current Cardinal Heights building, and build a new multi-purpose stadium at the Ashley Field site for use by both high schools.

Staff and community members were involved in the process primarily through a set of committees and planning teams, similar to the district’s approach during construction of the eighth and ninth elementary schools.

The plan for migrating students from current grade configurations to the board-approved grade configuration informs many of the post referendum processes. Because of that, the SPASD administrative team facilitated this process first.

The School Board’s charge for the Student Migration Planning Team was to effectively transition students to two high schools and three middle schools while striving to maintain instructional opportunities and operational efficiency.

During the first three stages, the Student Migration Planning Team gathered examples from across the nation, developed a matrix of six criteria to evaluate each of the options, and developed a set of Pros and Cons for the options.

In order to gather input on a selection of migration options, the Student Migration Planning Team held a series of engagement events:

• Community Open House — October 7, 2019. The 5-6 p.m. open house took place at the SPHS Library and was advertised on Facebook and through two ads in the Sun Prairie Star.

After implementing the process and after staff and community input was taken into consideration, Option A was approved by the School Board on Oct. 28. Option A calls for all middle and high school students to transition to their attendance area schools in 2022-23.

But Jon Langhans, a Patriot Way resident who said his child will be among the migrating seniors in the 2022-23 school year, questioned the matrix scoring method. He said many of the items weighted in the matrix could have been tallied or scored differently and given the recommendation to Option B.

“I think you should let them finish as Cardinals without chaos . . . don’t try to rip the Band-Aid off now,” Langhans told the board.

Despite the Oct. 7 Open House which he said he attended, Langhans said his appearance at the Oct. 28 meeting demonstrated few parents knew of the migration plan or that their high school seniors will be impacted.

Pointing to the recent school name and mascot surveys, Langhans questioned why the district did not survey parents of current freshmen to determine their preferred migration options. “I highly doubt a lot of senior parents don’t care,” Langhans said. He urged passage of Option B, or that the item be tabled until more parent input could be obtained.

Board Treasurer Dave Hoekstra echoed that sentiment, questioning why administration didn’t do more to determine feedback from parents and students.

Saron bristled, referring to one of Hoekstra’s questions as a “cross examination,” and listed both the board action in April and the October 7 open house as two methods where the board and community had input into the process.

“But the board didn’t say anything in April so we went forward with that,” Saron said.

Hoekstra said it was not “apples to apples” as a method of determining input. He said it’s the board’s mistake if input was not sought. “I don’t necessarily favor Option A or Option B,” Hoekstra said, but also said he was not comfortable making a vote during the Oct. 28 meeting.

Board member Bryn Horton said she has talked with several parents about the migration plan who were aware it was happening. “I have heard good things, bad things,” Horton said, but added she was OK with parent engagement in the process.

Student board member Emily Flood said she’s talked with several students, including her younger brother, who will be impacted by the migration. Although she will not be impacted by the migration, Flood said she would also have preferred Option A. “I think we need to embrace the change,” Flood said, adding she could not imagine attending a school with only grades 9-11 and no senior class.

“This is one of those issues . . . that there is no consensus across the board in the community,” Board Vice President Tom Weber said. While agreeing that some items in the matrix could have been scored differently, Weber also said Option A was acceptable.

Weber also questioned that parents didn’t know what was happening. “If we were talking about canceling the JV hockey program, that word would get out and people would be here,” Weber said.

“That’s just an example,” Board President Steve Schroeder quickly said, adding that the board was not considering that at all.

Ruffin referred to Option A as “just rip off the bandage.”

Board Clerk Carol Sue Albright had a unique perspective having been a student when Madison Memorial opened and students were split from Madison West High School.

“We didn’t have a senior class,” she recalled. With that in mind, Albright said she now supported Option A as a “more balanced way to get things started.”

Board member Caren Diedrich agreed. She said she talked with her granddaughter about it.

“Having a senior class is the most important,” she said, adding that her granddaughter was willing to roll with the change.

Schroeder said kids are adaptable — it’s the adults that need the longer period to adjust.

“There’s no perfect plan,” Schroeder said, “but at the end of the day, we have to make the best decision for the most kids.”

The board unanimously approved the student migration plan, with the next step being the Boundary Task Force to determine the attendance boundaries for the middle schools and the two high schools.

Stay up to date with the SPASD’s post-referendum activities online at https://www.sunprairieschools.org/ref2019