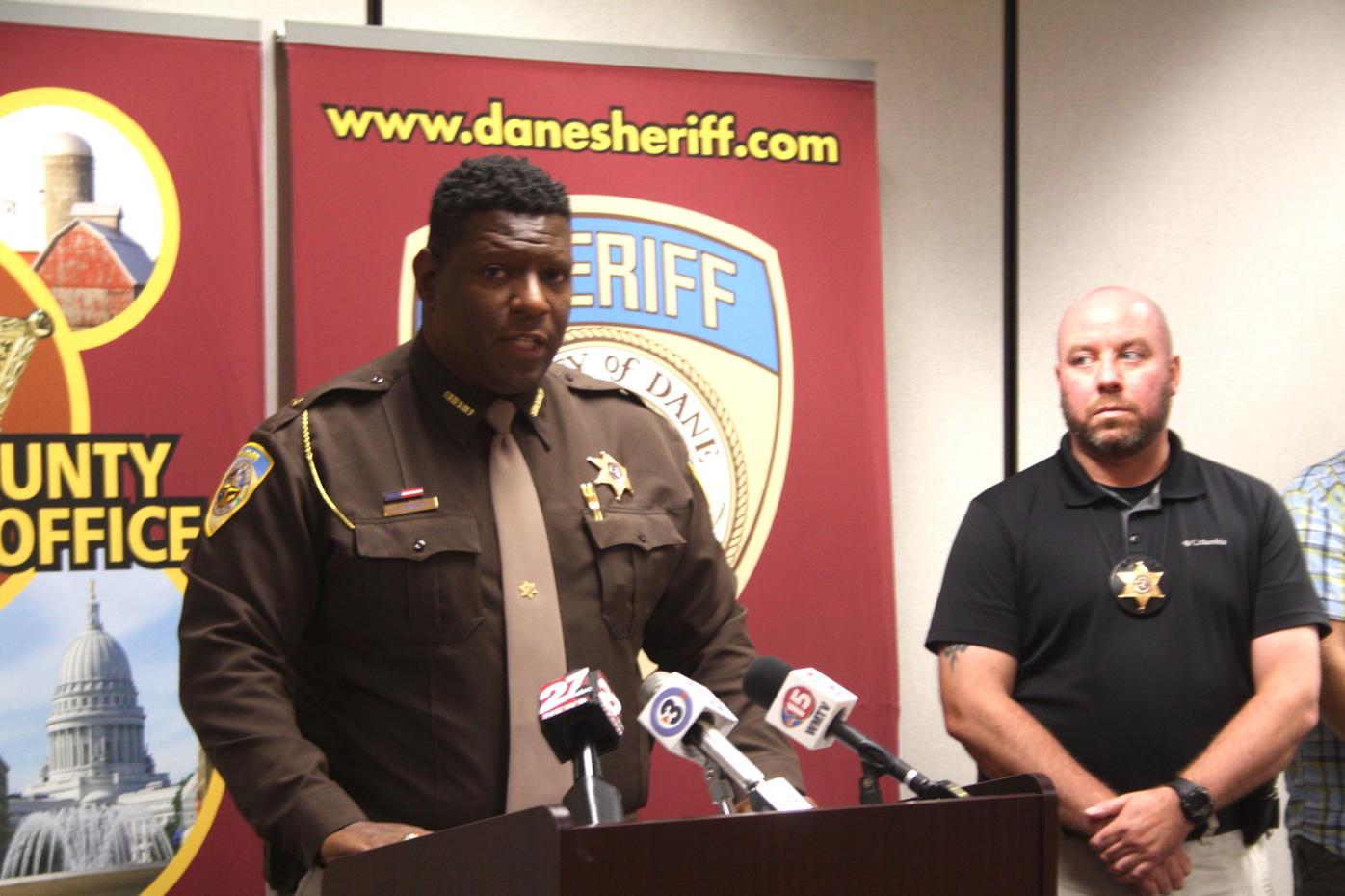 Dane County Sheriff Kalvin Barrett (shown here in a Friday July 30 press briefing) recently sat down for an interview that included many of his priorities as sheriff. 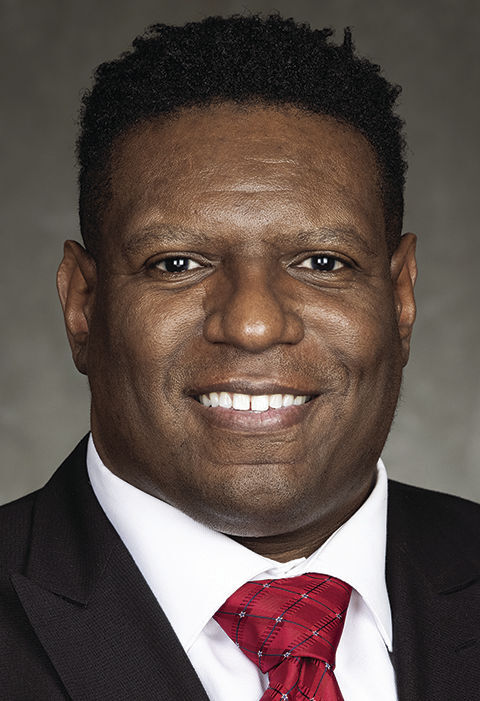 Getting ready to take a political position on the new Dane County Jail, heading up a double homicide investigation, mentoring young people, and being a peace officer are all on the mind of Dane County Sheriff Kalvin Barrett, who will mark his 90th day in office on Monday, August 9th.

Last week, the former Sun Prairie Police Officer, law enforcement instructor and current sheriff sat down for an interview at the Sun Prairie Star offices inside Liberty Square Commons. Here are some of the questions and answers:

Sun Prairie Star: Please describe how the appointment was offered and where you were when you found out and kind of the whole story behind that and what conversations you had with your family.

Sheriff Barrett: It was challenging mentally, which I thought was fantastic. And it just showed all of the great effort that went into identifying the next sheriff for Dane County, which is the second largest county here in the state. It started with a very detailed application that I think was around 15 pages long. And it really asked a lot of good questions, but it also had essay questions on it that had a word limit on it, which I thought was fantastic because it really forced me as an applicant to get into the steak and potatoes of the answer and not just kind of ramble on. It was very well orchestrated and put together.

Then it continued on to an interview process — a panel that had sheriffs on it, immigration attorneys, other attorneys, police chiefs, and other community members on it as well. And it was a very well run panel process that asked some very difficult questions that really focused a lot on social justice and what that looked like moving forward in regards to criminal justice reform.

Then there was additional interviews that took place from there that included other members of Gov. Evers office. And then the final interview was with Governor Evers himself. And I was with my family when I received the call and they informed me that I was selected from the group as the next Dane County Sheriff. It is a great, great opportunity.

SPS: So what was the reaction from your family?

Sheriff: We’ve been planning for this — I’ve always wanted to be the Dane County Sheriff. I said that in 2009, when I came here and I was hired by the Dane County Sheriff’s office, I knew I wanted to be in a position of influence and leadership here. And the sheriff was one of those. We’re the largest peace officer agency in the county. And the state looks at us in regards to our criminal justice reform or practices. And we really are a leader in the state, so I saw this as an opportunity to really start moving us in a direction of 21st Century policing, which is where I envisioned us going back to 2009 when I started as a Dane County Deputy.

SPS: What’s it been like since you’ve been appointed the sheriff, what obstacles have you encountered and what has been easier than you thought initially?

It’s busy, there’s no free time. What I do think is easier than I thought was my wife, who is the rock of our family, is really able to organize everything. I’m able to work hard, give what the county or the residents of Dane County need, provide what our sheriff’s office staff and deputies need, but also provide that important family time with my wife and two daughters.

SPS: The jail’s current operating conditions make it unsafe for deputies and inmates and that’s from previous Sheriff Dave Mahoney, and the current proposal to replace the jail seems just kind of stuck in limbo. What’s your position as the administrator of the jail, about the urgency to get the project completed?

Sheriff: I will. And to do it justice, and really be able to gather as much information and evidence-based data that I can, but also community input through community engagement, I have not come out with an official stance on whether or not I support or not support the current jail project. I’m waiting for my 100 days in office.

I felt that within 100 days, that would provide me with the opportunity to meet with community leaders, community activists, community representatives, and our staff at our sheriff’s office, our deputies that are working in these conditions, but also with different groups, community groups like Nehemiah and Man Up, and those who have been incarcerated to see exactly what their experiences are, and really do the research and look at what this new South Tower consolidated facility can bring in regards to dignity, humanity, and respect.

SPS: There’s some in the corrections and criminal justice community who think that COVID-19 has changed the way individuals are held in correctional facilities. How do you think COVID-19 and other highly contagious diseases should impact the design of the new space?

Sheriff: I think in looking at our practices that we put in place, the practices that we have now and the practices that we can continue, it’s important that we stay flexible. I think that’s the most important key when dealing with these anomalies, like COVID-19 — things that come every 100 years — and having the space and ability to be flexible and turn certain areas in our facilities into COVID isolation . . . and I think that’s been one of the biggest restrictions is not having that space and that flexibility to do that when something like this comes up.

SPS: Describe your peace officer mentality and why you think that’s that’s important today, especially in dealing with juvenile offenders?

Sheriff: My peace officer mindset and philosophy and what we’re going to implement and what we’re continuing to do here at the sheriff’s office is take it [away] from law enforcement, just the name and the title, and through all my studies as a criminal justice instructor, and having received a master’s in criminal justice, understanding that titles matter especially when it comes to community perception.

When we refer to ourselves as law enforcement officers ourselves, we see ourselves as just that — we’re here to enforce the law. But in reality, we do so much more than just enforce the law — as a Sun Prairie police officer and as a deputy, I was in corrections, I was a big brother, I was a big sister, I was a marriage counselor at times . . . looking at Chapter 59 of the Wisconsin state statutes, it defines the powers and responsibilities of the sheriff.

And it says in there that we are here to keep and maintain the peace. But also too, from the community perspective, if they see us as only law enforcement officers, that’s what they think we do. But in reality, we do so much more. So that’s why I think that’s so important in regards to terms and definitions of how we define ourselves.

SPS: In that same kind of vein, describe a couple of the programs the sheriff’s office offers through the jail, the rehabilitate inmates and how the department, how many the department offers in total.

Sheriff: We have approximately 30 programs that we provide . . . we have Parenting Inside Out, which is one of our biggest programs that we have — a program that helps educate in a curriculum that’s been put together our social workers, with the help of UW professors to help fathers and parents that are incarcerated understand the importance of their relationships with their children.

At the completion of the curriculum of the program, we actually put together a celebration where they have a face-to-face contact visit with their children. Parenting Inside Out is a great one. We have literacy programs, we have addiction programs . . . Through our social media every week we do a ‘Did you know’, and we talk about the different programs we have, because I believe not everyone knows what we really do here. And that just goes towards our peace officer mindset and our control over those who are within our custody, because it’s more than just having them in a place where they’re sitting and being punished.

That mindset of how the first part of the ‘50s, the oldest part of our Dane County Jail was built, was designed at that time to just house and punish individuals. And now here we are . . . that mindset is not the same. We’re here to rehabilitate treat them with dignity and respect, and we have to ask ourselves every day, ‘does that city county building reflect the values of our community here in Madison?’

SPS: Anything else you want to add? I know you participated in a program yesterday that you wanted to talk about a little bit?

Sheriff: We’re starting program where we’re meeting with a group of young men that I met through a community event at the Juneteenth parade that we had in Madison . . . we were going to let the young gentleman, provide the name, but I’ve just referred to it as Distinguished Gentlemen. And this program is designed to help and provide young men in our community and women with skills that they may not have received before.

That includes changing a tire, filling up a gas tank, balancing a checkbook, tying a tie, how a proper suit should fit, proper etiquette when you’re out and about, a firm handshake, the importance of eye contact. There’s just so much that we think that we can provide and myself as the sheriff, but also with Lt. John Triggs, who is also a Sun Prairie resident and one of our highest ranking African-American officers who is going to be a part of this program, too.

And from there, we’re going to bring in different community leaders to help building and helping provide skills to these young men and women.

Individuals wishing to learn more about the Distinguished Gentlemen program or others referred to at the Dane County Jail should email the sheriff at barrett.kalvin@danesheriff.com. Individuals interested in applying as deputies should go to teamdane.com.