The upper level of Ashley Field’s stadium will allow patrons to walk around the top of the stadium. The playing surface will be striped for football, soccer and lacrosse, while the stadium itself will include a new, state-of-the-art scoreboard and artificial turf playing surface. 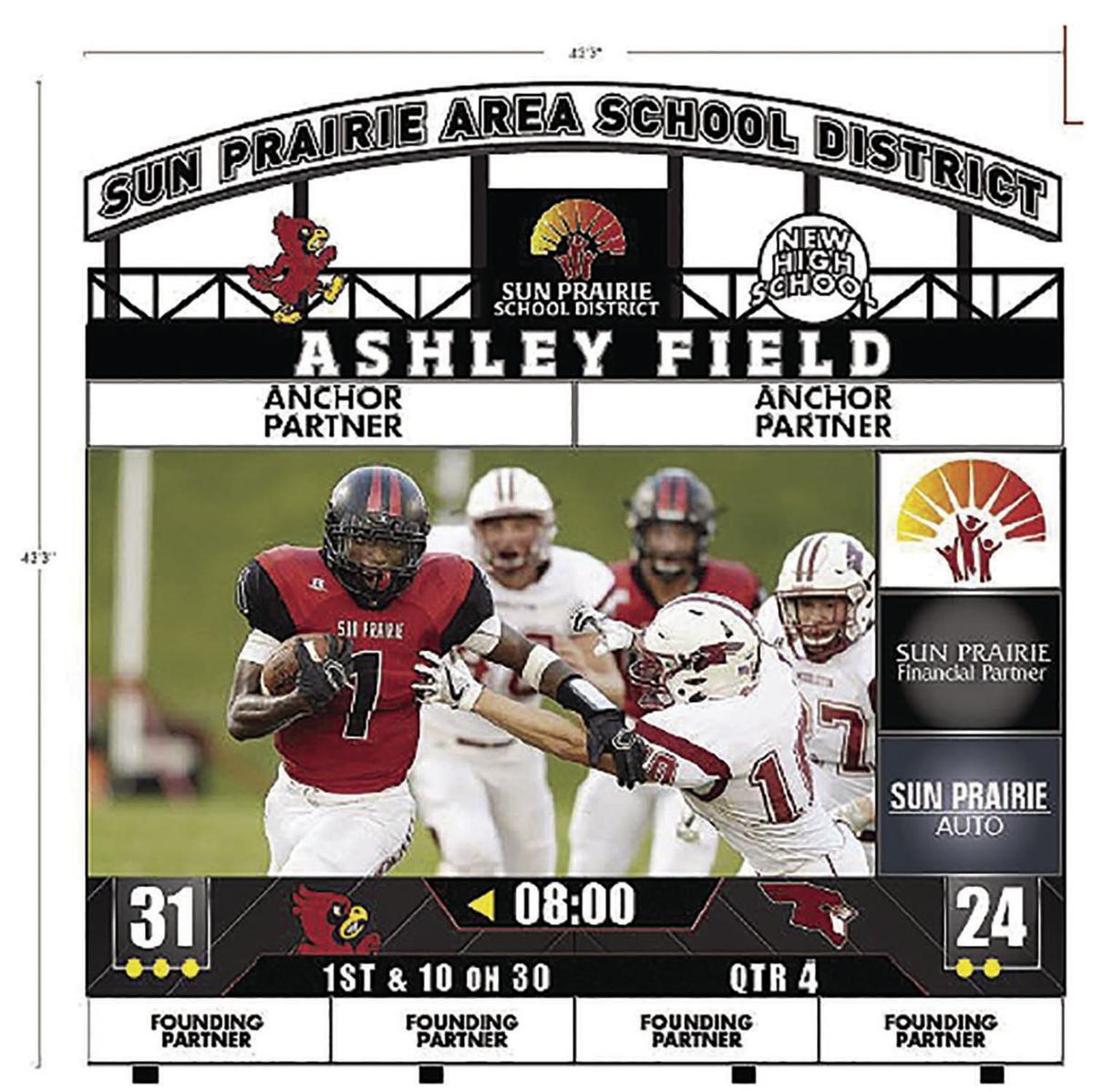 The new 42-foot-wide Ashley Field scoreboard will have a place for sponsors and have a large video screen. The scoreboard will contain most of the sound system and be located on the north end of the stadium, projecting south into the seating bowl, which will be located below ground level.

The upper level of Ashley Field’s stadium will allow patrons to walk around the top of the stadium. The playing surface will be striped for football, soccer and lacrosse, while the stadium itself will include a new, state-of-the-art scoreboard and artificial turf playing surface.

The new 42-foot-wide Ashley Field scoreboard will have a place for sponsors and have a large video screen. The scoreboard will contain most of the sound system and be located on the north end of the stadium, projecting south into the seating bowl, which will be located below ground level.

The Sun Prairie Area School District and Bray Architects sought approval to redevelop the existing field, which runs east-west, into a new multi-purpose 4,075-seat stadium that will be situated north-south on the same field area.

Additional parking will also be part of the plan, which does not include the current Prairie Phoenix Academy at 160 South St. as part of its development. The district plans to demolish the building in 2023, after the academy has moved into the current Cardinal Heights Upper Middle School at 220 Kroncke Drive and work with the city to redevelop the parcel, possibly with additional parking.

With its new north-south orientation, spectators will enter through three ticketed gates on the upper plaza level, located at the south end of the field.

Both the west and east sides of the field will have top loaded bleachers with Americans with Disability Act (ADA) accessible ramps from the upper plaza.

According to materials provided by the city, the upper plaza will be level with the parking lot, approximately 20 feet above the playing field, and include restrooms and concession stands. Team and training rooms will be located on the field level below the west bleachers. The venue will be surrounded by a 6-foot tall aluminum fence with multiple gates for exiting events and for emergency cases.

Vehicular access to the stadium will remain from the south end of Kroncke Drive with secondary access off Linnerud Drive.

Two 24-foot wide emergency access drives will connect the site to South Street. The lit multi-use path located north of the venue will provide a connection from the off-street multi-use path on Commercial Avenue to downtown.

A tree-lined promenade connecting the front entrance of Cardinal Heights Upper Middle School (CHUMS) to the ticket window is included in the center of the parking lot for pedestrian access. Bike racks accommodating up to 40 bikes are proposed at the southeast corner of the venue.

But it was bikes that provided the basis for the change in the plan. Instead of requiring the district to extend a bike path to the drop-off area along Kroncke Drive, the city proposed adding bump outs to Kroncke Drive to allow for safe bicycle access from Commercial Avenue. The district will improve existing sidewalk leading to the field from Linnerud Drive into a bike path. The district will also install bike path along the front of CHUMS (soon to be Central Heights Middle School) that will connect with a bike path (currently sidewalk) along the east side of Kroncke Drive.

The SPASD plans to begin demolition of the Ashley Field bleachers and field as soon as possible, with the goal of completing the stadium in August, 2020 so it can be used for Sun Prairie High School soccer, football and lacrosse this fall.

Parking will be prohibited on Lane Street from Market Street to 217 feet east of King Street if the city council approves the ordinance change. The city had received requests to restrict Lane Street parking because motorists can’t see around parked cars. City staff said the change would eliminate three to four parking spaces. Sun Prairie BID board members recommended approval of the proposal.

Alders voted to restrict parking in other parts of the city including the North-Windsor Street intersection.

Motorists have complained that they have a hard time turning when cars are parked there. The no parking zone will be extended 10 feet on the west side of North Street both north and south of Windsor Street.

Parking will also be restricted near the driveways of 685 and 691 Commercial Ave. on the south side of the street. City officials said that tractor-trailers have struggled to pull in and out of the driveway when cars are parked near the entrances and have called the police to remove cars.

In a related traffic item, alders also voted to request the Wisconsin Department of Transportation (WisDOT) review and alter the traffic signals at Highway 151 and Windsor Street.

Under Citizen Appearances on the agenda, Esser dismissed a complaint by Bob Davis about the sidewalks scheduled to be installed on both sides of Grandview Drive. Davis said it would make more sense to install sidewalks on the opposite side of the street, where a park is located, and leave them only on one side.

Esser explained that the city council’s position is that during all street reconstruction projects, the city will install new sidewalk on both sides of the street where possible.

“So I’m beating a dead horse,” Davis said, adding that the sidewalk will be installed even if neighbors don’t want it.

When Davis persisted, Esser dismissed him saying he had no more to say on the subject.

The council’s consent agenda, which was approved by alders, contained three items forwarded for approval from the plan commission:

• A request from Token Properties to OK a Miscellaneous Application to combine lots and rezone property at 6332 Portage Road to allow for outdoor storage use and the construction of two personal storage (mini-warehouse) buildings, and a second request approving an amendment to the city Comprehensive Plan to change the land use classification for approximately 0.9 acres of land located at 6332 Portage Road in Token Creek.

• An ordinance approving an amendment to the Habitat for Humanity Addition to Prairie Homes Subdivision General Development Plan (GDP) to increase the residential density by one home on lands located at 1175 Vandenburg St.; and

• An ordinance approving an amendment to the West Prairie Village Planned GDP to allow six-foot high fences on lots adjacent to Grand Avenue.

—Jennifer Fetterly contributed to this story