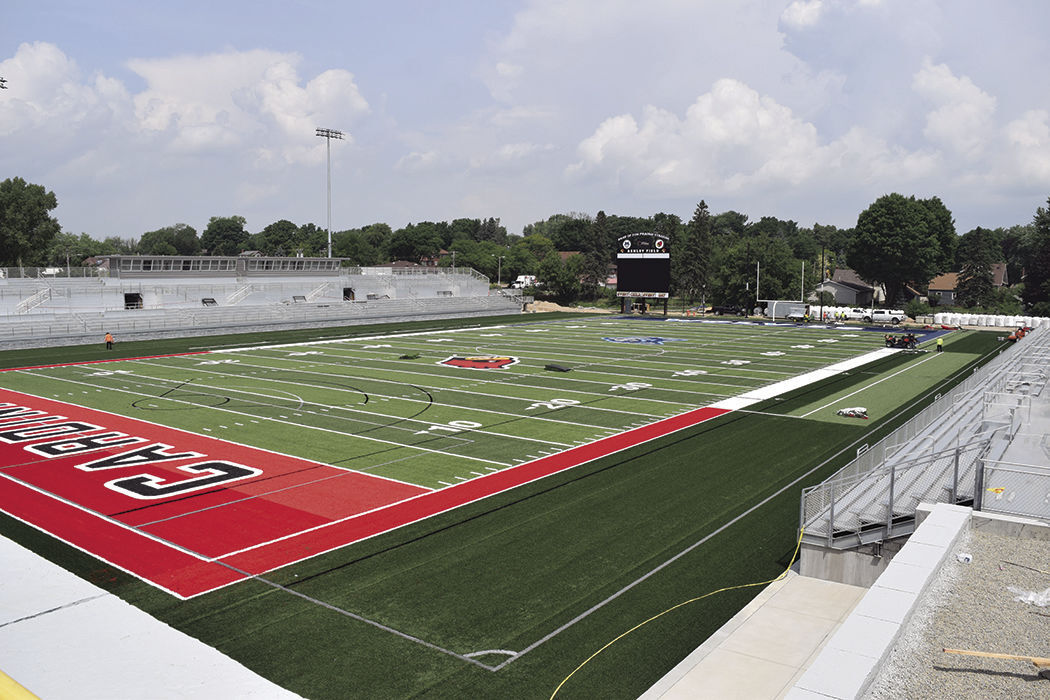 The new Bank of Sun Prairie Stadium at Ashley Field will be the future home of both Sun Prairie East and Sun Prairie West High School football, soccer and lacrosse programs. The project includes sports turf installed by Midwest Sport & Turf System, along with a video scoreboard by Daktronics. The stadium, about 90% complete, is expected to be turned over to the Sun Prairie Area School District by Findorff in mid-December.

The new Bank of Sun Prairie Stadium at Ashley Field will be the future home of both Sun Prairie East and Sun Prairie West High School football, soccer and lacrosse programs. The project includes sports turf installed by Midwest Sport & Turf System, along with a video scoreboard by Daktronics. The stadium, about 90% complete, is expected to be turned over to the Sun Prairie Area School District by Findorff in mid-December.

The SPASD is “expecting to receive occupancy in mid-December for the facility,” according to a report from Kevin Sukow, Director of Facilities and Grounds; and Paul Korz, Construction Project Manager.

The project includes the demolition of the current Prairie Phoenix Academy building, which is slated to occur after August, 2022.

The current budget projection for the Bank of Sun Prairie Stadium at Ashley Field is $18,268,335, including project enhancements such as an upgrade to a video scoreboard, an intermediate landing to connect the home and visiting side bleachers, safety and security enhancements, and infrastructure for energy efficiency enhancements.

All project enhancements were funded through additional funding sources, according to the report.

“At completion of the project we are also expecting to have some unallocated contingency funding as well as realize some construction savings due to construction efficiencies as well as using conservative budget estimates for the remaining work to be completed,” the report reads.

During the Nov. 23 Sun Prairie School Board meeting, Sukow explained the 90 percent figure is because of the need to light emergency exit walkways at the stadium and completion of a wall on the visitor’s side of the stadium. The wall will prevent snow from blowing onto the field, Sukow told the board.

Sun Prairie West High School project, under construction on a site visible from several areas on the city’s far west side, is currently projecting a total project budget of $140,753,586.

The project includes allocating $4,153,688 worth of contingencies, as well as including $2,099,000 worth of district-requested project additions.

“Most of the project has been bid out and contracts have been awarded and we are working on value engineering exercises with contractors as they are brought on to the project,” the report reads. “We have already achieved about $800,000 in cost avoidance and are hoping to increase that amount. We are also working on identifying alternative funding sources for this project as well.”

Projected overages in the project are in owner costs, which include the costs and fees associated with the development of the site.

In April 2019, a referendum was approved allowing the SPASD to commence with a renovation of Ashley Field, construction of an additional High School, renovations to Cardinal Heights building to create three separate spaces for a middle school, relocate the Prairie Phoenix Academy (PPA) into a separate and distinct area of the building, and a Professional Learning Center.

Additionally, the referendum authorized capital maintenance projects at all secondary schools. The SPASD was authorized to issue $164 million in General Obligation Bonds to fund the construction, as well as to exceed the revenue cap by $5 million per year, starting in the 2019-20 fiscal year. Of that amount, $10 million will be applied to construction costs to lower the amount of debt that the District has for these projects.

“I’ll just throw out a big thank you to the school board for the partnership,” remarked Jeff Tubbs, a Sun Prairie resident who also is a Findrff vice president. Tubbs invited the public to drive by the new Sun Prairie West High School to see the progress. “It’s coming out of the ground nicely.”

Sun Prairie School Board Governance Officer Dave Hoekstra agreed, adding that he loves to see the detailed information that included three screencasts available through the Board Docs online agenda packet. “I love to see it,” said Hoekstra, who uses a photo of the end zone at the new Bank of Sun Prairie Stadium at Ashley Field as a Zoom backdrop.

Sun Prairie School Board President Steve Schroeder added his comments by thanking everyone who has worked on both the stadium and Sun Prairie West High School to date.

No formal board action was required regarding the referendum construction updates, but the report stated that some district-requested items at Sun Prairie West High School will require board approval at a later date.