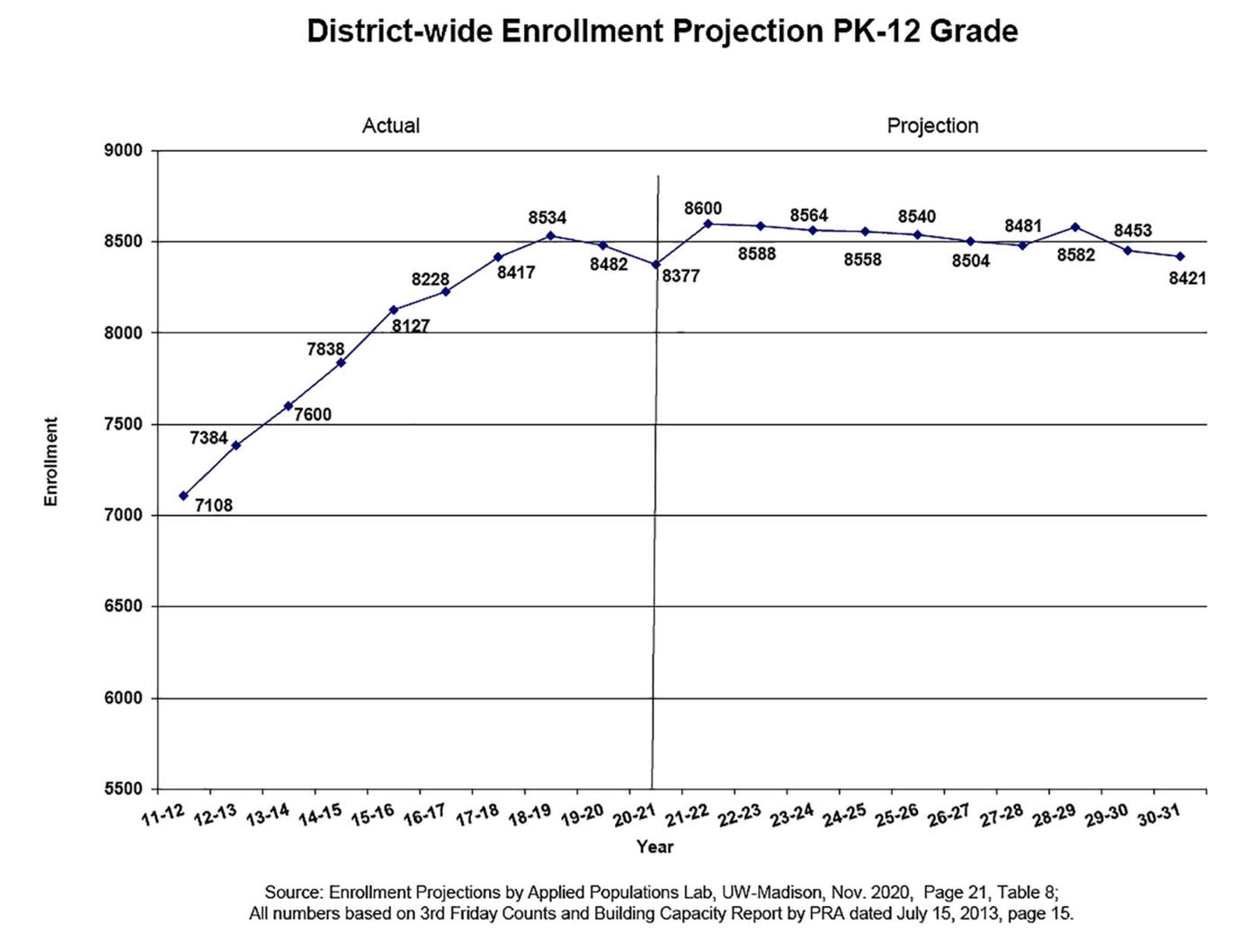 Districtwide enrollment projections for grades pre-kindergarten through 12 in the Sun Prairie Area School District (SPASD) show a 223 student enrollment increase for the 2021-22 school year before enrollment gradually levels off to 8,421 students in the 2030-31 school year. 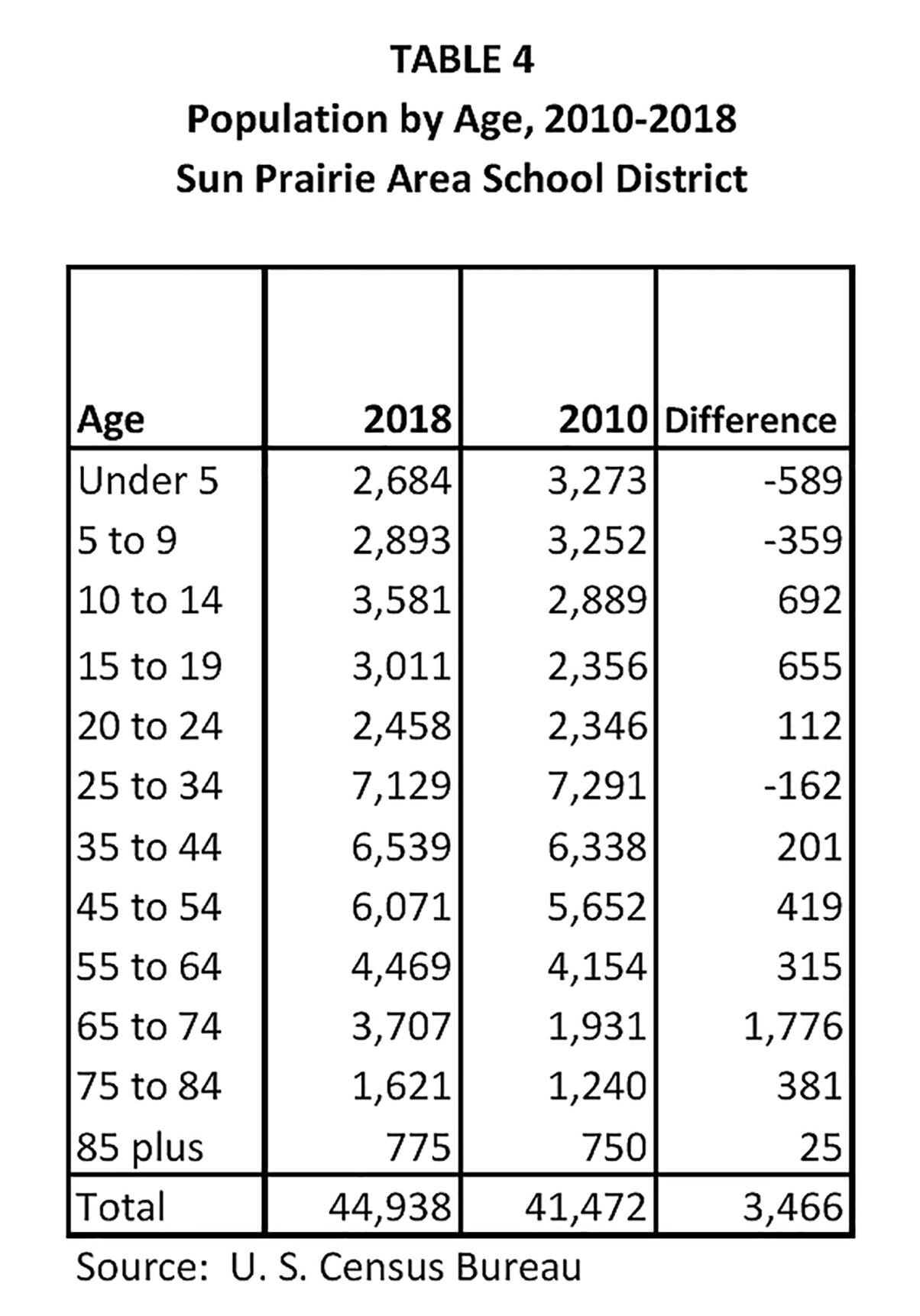 The chart shows a decline of 589 kids younger than age 5 in the Sun Prairie Area School District from 2010-18, while the number of children ages 10 to 14 has increased by 692, according to the UW Applied Population Lab.

Districtwide enrollment projections for grades pre-kindergarten through 12 in the Sun Prairie Area School District (SPASD) show a 223 student enrollment increase for the 2021-22 school year before enrollment gradually levels off to 8,421 students in the 2030-31 school year.

The chart shows a decline of 589 kids younger than age 5 in the Sun Prairie Area School District from 2010-18, while the number of children ages 10 to 14 has increased by 692, according to the UW Applied Population Lab.

Members of the Sun Prairie School Board on Dec. 7 heard those and other findings of the UW Applied Population Lab’s (UWAPL) November 2020 enrollment projections for the SPASD.

The report uses a baseline projection model to assume the 10-year trend in enrollment, migration, and births will be representative of future trends in the district. That model projects that pre-kindergarten (PK) through grade 12 enrollment will increase from 8,377 students in 2020-21 to 8,540 students in 2025-26, or an increase of 1.9%.

The report takes into consideration past enrollment, current and projected births, and overall trends in population and housing to determine future student growth of student population in the district.

Other findings in the report presented by Sarah Kemp from UWAPL include:

• During the past five years, the SPASD has experienced the greatest increase in enrollment in grades 9-12 followed by grades 6-8. The elementary school enrollment has increased the least in recent years.

• Overall, trends in births have been decreasing while kindergarten classes have been increasing over time. Single-family home construction has averaged 213 new homes annually during the last five years driving migration into the district.

• All four models used in the report project PK-12 enrollment increasing in the next five years.

• District-level projections should be viewed as having high reliability over the next five years, but increasingly, SPASD enrollment will likely deviate from the projections over time.

The COVID-19 health crisis has provided a challenge this year and APL has modified the projections to address this issue. The projection process uses a combination of historical enrollment data, birth trends and projections, and housing and population trends to create reasonable assumptions about future growth scenarios and the likely impact on enrollment in the school district.

“I think we’re going to have a large number of community members who are going to be surprised by these numbers,” remarked Sun Prairie School Board President Steve Schroeder, who asked how the population figures will be communicated to the public.

“At this point, yes we will have room to grow over the next 10 years,” Saron said, adding that high school students will continue to be there. Saron said the Roffers and UWAPL presentations show the investments are solid because of low interest rates and increased building costs in the future.

“I still think we are in the right place,” Saron said, adding that volatile enrollment will occur in the SPASD during the next few years.

“When these numbers get out, we are going to be hearing from a number of people,” Schroeder said. But he agreed the construction of the new Sun Prairie West High School as well as the renovation of Cardinal Heights Upper Middle School to house a new middle school, Prairie Phoenix Academy and a district training center is still needed. “I’m completely supportive of that.”

But Schroeder said the public needs to hear the district’s talking points about the student population report.

“I have no doubt,” Schroeder said to the SPASD Administrative Team, “that you are already planning to do that.”

Read the full UWAPL report with the online version of this article at sunprairiestar.com.

UWAPL Presentation to SP School Board