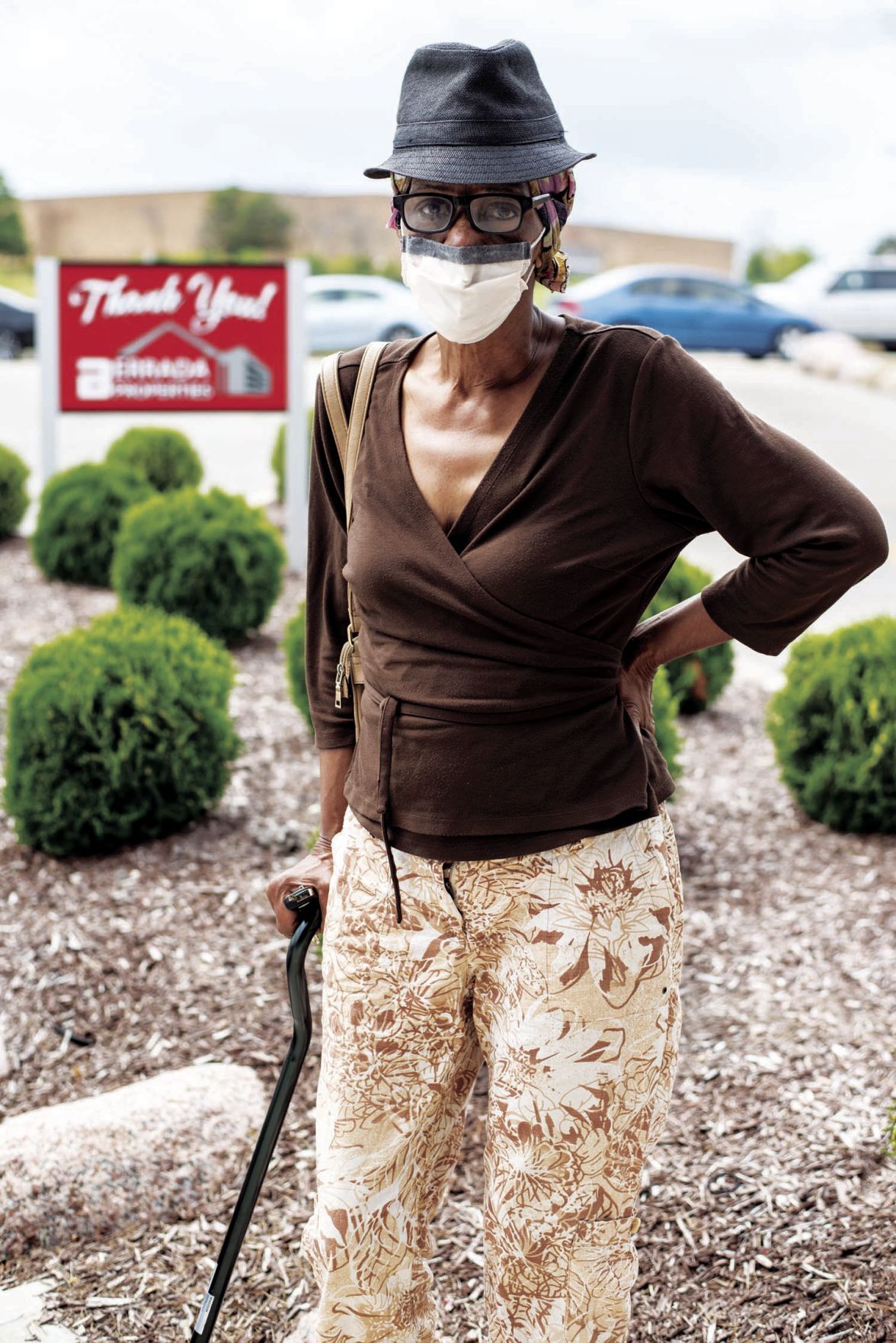 Rebecca Moore-Gnacinski is seen outside the offices of Berrada Properties, her landlord, in Milwaukee on August 10, 2020, after delivering a letter from the Milwaukee Autonomous Tenants Union demanding that Berrada cease an attempt to evict her. 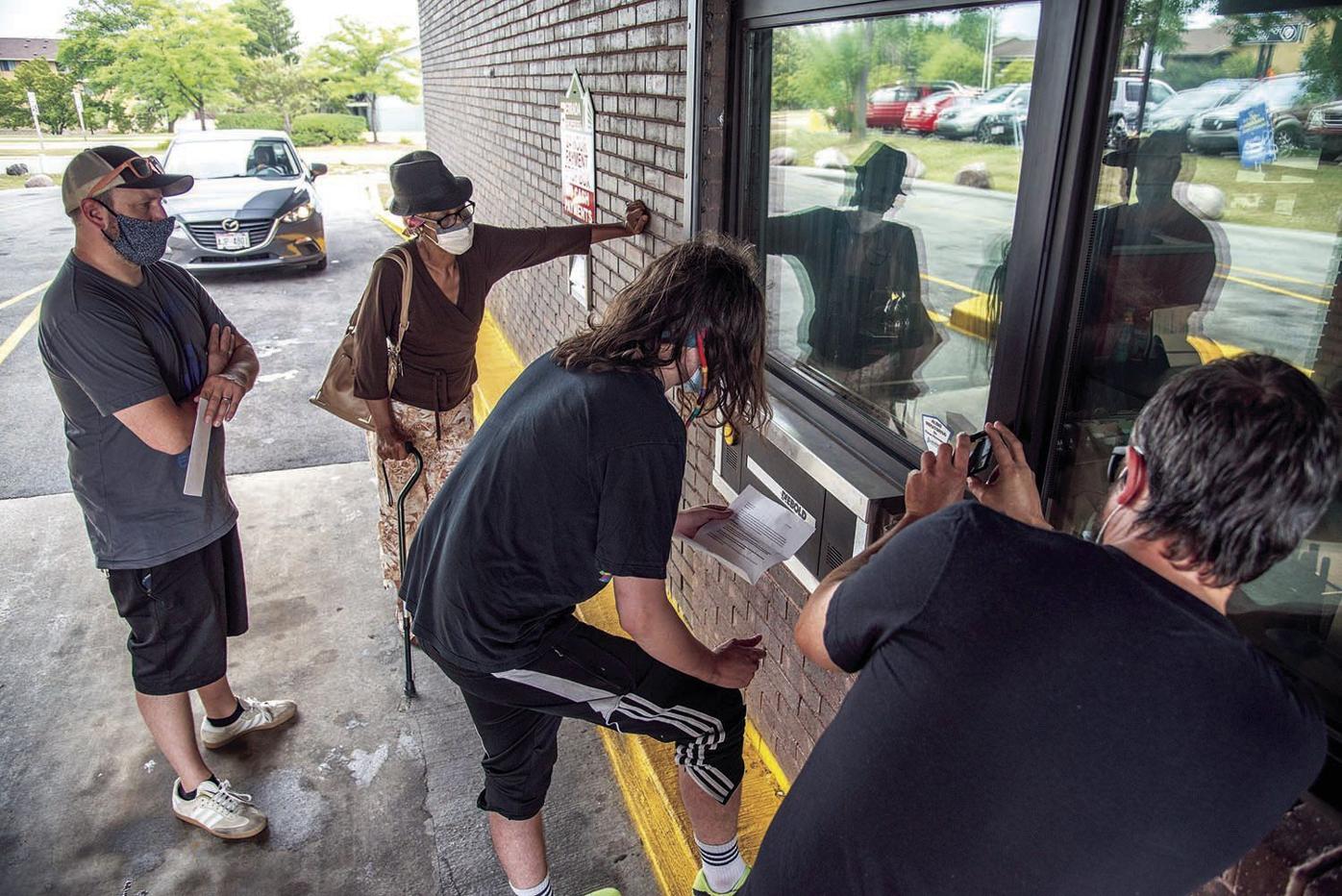 Members of the Milwaukee Autonomous Tenants Union and Rebecca Moore-Gnacinski, second from left, deliver a letter demanding that Berrada Properties, Moore-Gnacinsky's landlord, end its attempt to evict her on August 10, 2020. 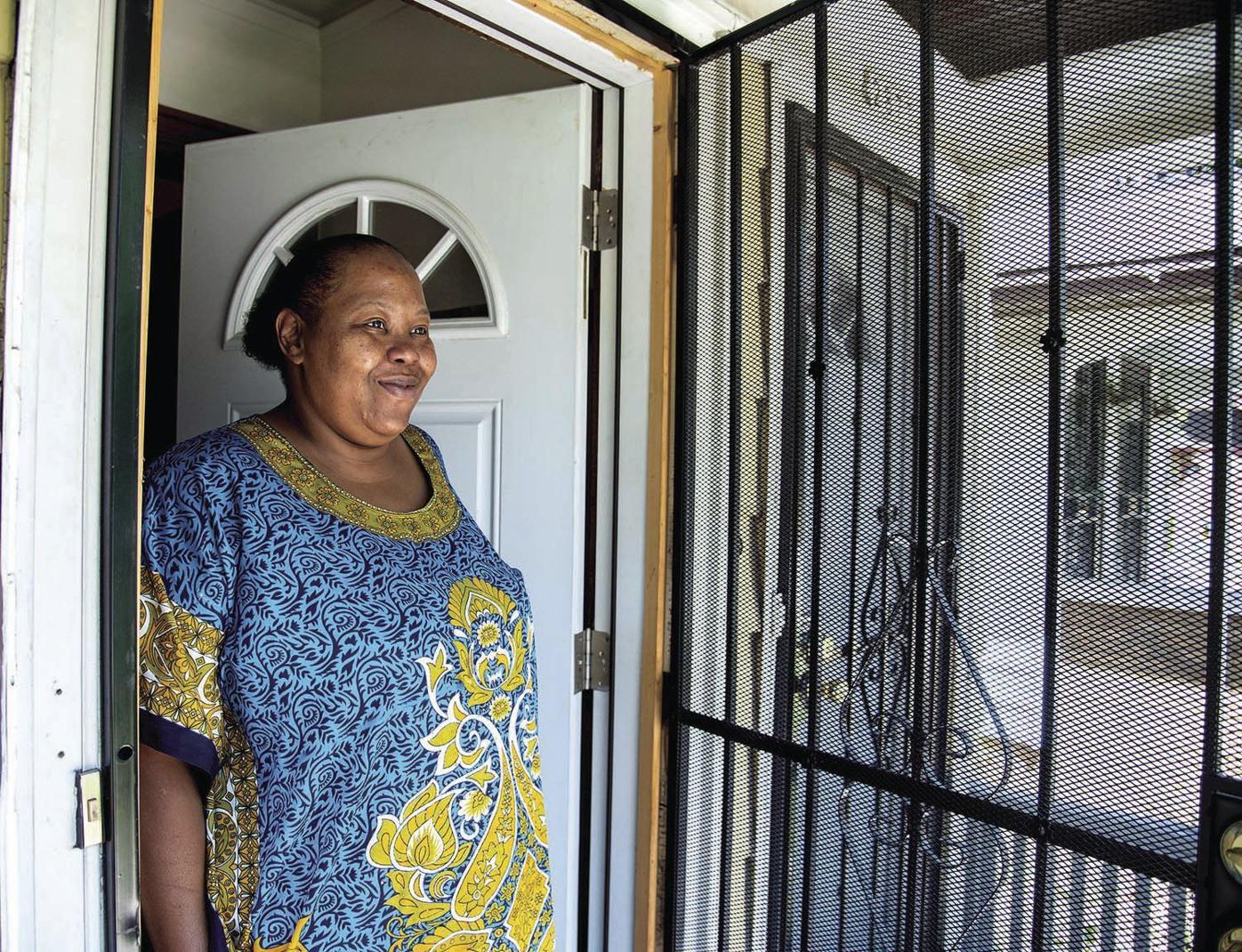 Wyconda Clayton is seen inside her home in Milwaukee on July 17, 2020. Black women are at least twice as likely to have an eviction filed against them compared to white renters in Wisconsin and 16 other states, according to an ACLU analysis of 2012-16 Eviction Lab data. 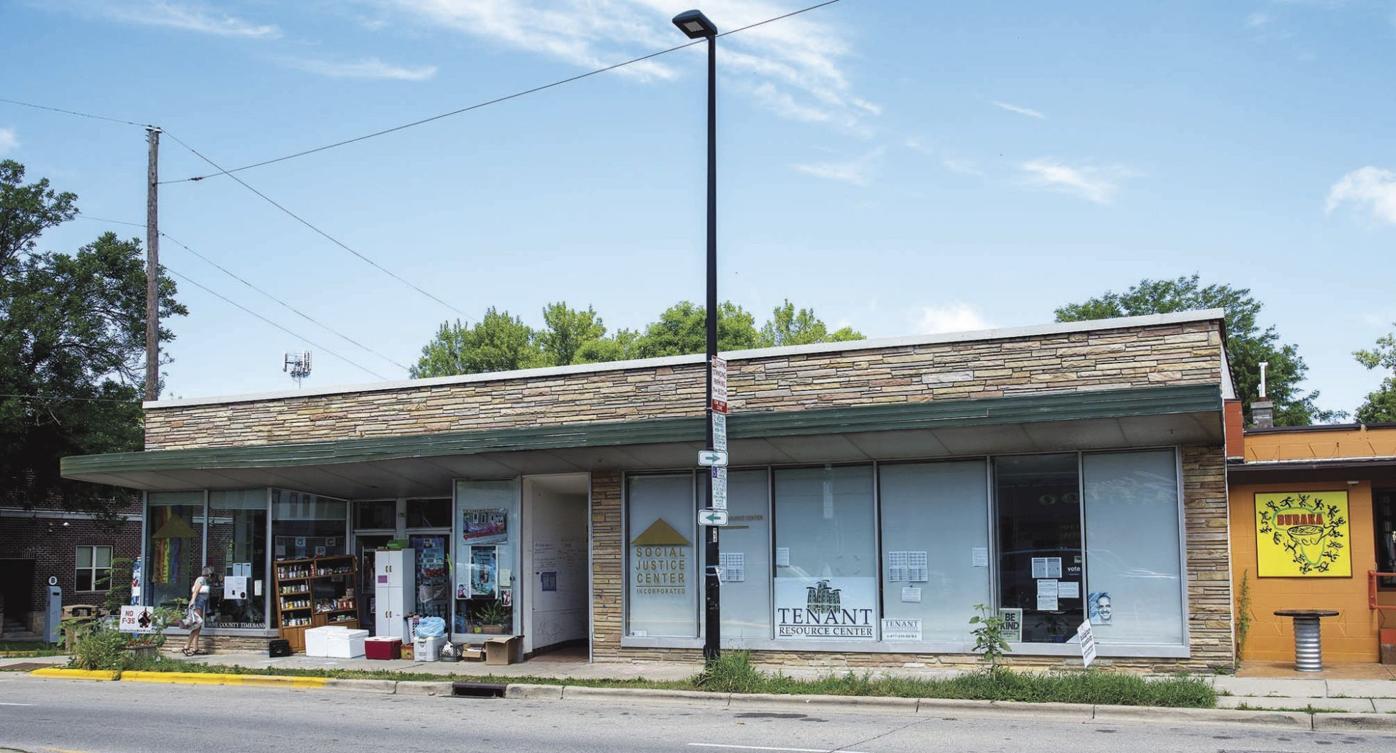 The Tenant Resource Center in Madison, which provides various services to renters and housing insecure individuals in the city, is shown in this July 10, 2020 photo.

Rebecca Moore-Gnacinski is seen outside the offices of Berrada Properties, her landlord, in Milwaukee on August 10, 2020, after delivering a letter from the Milwaukee Autonomous Tenants Union demanding that Berrada cease an attempt to evict her.

Members of the Milwaukee Autonomous Tenants Union and Rebecca Moore-Gnacinski, second from left, deliver a letter demanding that Berrada Properties, Moore-Gnacinsky's landlord, end its attempt to evict her on August 10, 2020.

Wyconda Clayton is seen inside her home in Milwaukee on July 17, 2020. Black women are at least twice as likely to have an eviction filed against them compared to white renters in Wisconsin and 16 other states, according to an ACLU analysis of 2012-16 Eviction Lab data.

The Tenant Resource Center in Madison, which provides various services to renters and housing insecure individuals in the city, is shown in this July 10, 2020 photo.

Kelli Walton waited four weeks to hear whether she qualified for state emergency rental assistance. When the news came, it was too late.

By the time the Social Development Commission, which distributes the aid, told her she was on a waiting list with thousands of others, Walton’s landlord had already issued a five-day notice — kickstarting an eviction.

The mother of two from Milwaukee said before the pandemic, she was paying rent on time. But Walton was infected by the coronavirus in April as it swept through the nursing home where she worked. She spent nearly three weeks in a hospital struggling to breathe.

Walton lost months of paychecks while recovering, joining a backlog of thousands waiting for the state Department of Workforce Development to process their unemployment insurance claims. Months later, Walton, 34, is still waiting on her unemployment benefits.

She fell behind on her bills — including rent. That left Walton with a damaging eviction filing on her record, forcing her to scramble to stay in her home as she recovers from the virus.

“There’s nowhere to go,” she said. “Where can you go if you don’t have anywhere to go?”

Thousands of Wisconsin renters contemplated those questions since May 26. That was when Gov. Tony Evers’ 60-day moratorium on evictions expired. Evers was among the first governors to lift a state moratorium, and his $25 million statewide emergency rental assistance program is failing to meet the demands of thousands in need.

Local governments and housing advocates are now trying to catch individuals slipping through the cracks in the federally funded state program.

“A lot of us who are doing this work right now are working one person at a time trying to stave off disaster,” said Joanne Lipo Zovic, an attorney and mediator for Mediate Milwaukee, which helps tenants and landlords reach agreements outside of court. “We kind of feel like we’re drinking out of a fire hose.”

‘A racial pattern of filings’

Roughly 30 to 40 million renters nationwide are at risk of losing their homes this year as state moratoriums on evictions expire, according to an August study by the Aspen Institute. Eviction filings are already upending lives in Wisconsin, especially in Milwaukee.

Milwaukee landlords filed for 1,447 evictions in June, 17% higher than pre-pandemic June averages, data from Princeton University’s Eviction Lab show. The city’s 1,347 eviction filings in July were 9% above averages from 2012 to 2016.

More than two-thirds of those filings hit Black-majority neighborhoods, according to Eviction Lab data, although Black residents make up just 39% of the population. The disparity highlights Milwaukee’s status as the nation’s most segregated metropolitan area, home to stark racial inequality created and maintained by decades of neglect from business and political leaders, according to research.

“Pre-COVID, there was definitely a racial pattern of filings, and that is definitely what we’re seeing now,” said Matt Mleczko, an Eviction Lab research assistant. “This is something that yet again is exposing and exacerbating long-running inequalities in cities like Milwaukee.”

But the crisis is not confined to Milwaukee. Nearly 200,000 Wisconsin households, or 27% of state renters, are behind on rent and at risk of eviction, according to analysis of census data by Stout Risius Ross LLC, an international consulting and investment banking firm. The analysis projects 134,000 eviction filings statewide by November.

Walton started a new job in mid-July and is working part time. While she remains on the state housing assistance waiting list, she is receiving last-minute funds from Community Advocates, a nonprofit administering Milwaukee County’s separate rental aid program.

Those funds staved off an eviction. But the filing, although dismissed, could still scar her record, because some landlords reject would-be renters even for thwarted evictions, housing experts say.

Evers, whose office did not respond to questions from Wisconsin Watch, took action early in the pandemic to keep people in their homes. His March 27 executive order banned landlords from evicting tenants for back rent and halted home foreclosures.

Wisconsin lifted its ban before most states. Neighboring Minnesota and Illinois still have moratoriums in place.

Even before the pandemic, more than 306,000 Wisconsin low-income renters spent more than half their income on housing and did not receive government housing assistance. Most live in Milwaukee.

Renters make up more than half of households in Milwaukee County, which in 2016 had a higher percentage of renters than any other large Midwestern county, according to a study from the Wisconsin Policy Forum. Before the coronavirus, about half were considered rent-burdened, meaning they spent at least 30% of their income on rent.

“There are a high number of people who are paying 50, 60, 70 or more percent of their income on housing,” said Lipo Zovic of Mediate Milwaukee.

Days before his eviction ban expired, Evers funneled $25 million in federal pandemic relief into the Wisconsin Rental Assistance Program (WRAP). He tapped housing agencies to evaluate tenants’ applications and send up to $3,000 directly to landlords.

But the agencies could not start processing applications until June 8, nearly two weeks after landlords could resume evictions.

WRAP through Aug. 6 distributed about $7 million to about 4,000 households statewide, said Paul, the WISCAP executive director.

That is a fraction of the 24,000 applicants in just Milwaukee, Washington and Ozaukee counties applying through the Social Development Commission. The cost of fully funding those requests would be $72 million, nearly three times what Evers earmarked statewide.

In the first two months, SDC distributed $1.1 million of $6.7 million in initial WRAP funds.  The city of Milwaukee this month sent $15 million in federal funds to the SDC and $1.6 million to Community Advocates to beef up aid to renters.

But the money didn’t flow fast enough to keep Wyconda Clayton out of court. The SDC ultimately granted her application — but her landlords refused the funds.

She lost work — and wages — as a home health care provider while caring for her elderly mother before the pandemic. She fell behind on rent, prompting her landlord to file for eviction in mid-March. The court delayed the case during the moratorium.

Clayton’s mother died in April, and she said she used money she had saved for rent to pay for the funeral. She eventually picked up a few home care hours, she said. But some elderly clients remain leery about welcoming workers into their homes during the pandemic, preventing her from earning enough to pay back her landlord, Business Ventures Investments.

When the moratorium expired, the company continued with the eviction.

Days before her Aug. 6 hearing, Clayton finally caught a break: SDC told her she qualified for $3,000 in WRAP aid, which could cover the rent she owed.

That was too late for Kevin and Dorothy Hampton, Clayton’s landlords at the investment company. They refused to submit paperwork to accept the funds.

“When (Clayton) called us about the rent assistance, she didn’t have that money yet,” said Dorothy Hampton. “And when it got to the end, Mr. Hampton decided he did not want to do it anymore.”

Community Advocates and Mediate Milwaukee are helping Clayton and the Hamptons negotiate an agreement to remove the eviction case from her public record if Clayton moves out within 60 days.

Clayton doesn’t want to leave the apartment, but she hopes an agreement will prevent worse harm to her renting record.

Black women like Clayton are at least twice as likely to have an eviction filed against them compared to white renters in Wisconsin and 16 other states, according to an ACLU analysis of Eviction Lab data.

“Nobody should have to go through this,” Clayton said.

More than a dozen tenants told Wisconsin Watch through News414, a Milwaukee-focused service journalism project, that they have hit snags while applying for WRAP.

Niesha Joseph moved into her Milwaukee apartment during an emergency in February, picking the place so her two children could avoid switching schools. She lost her temp agency job when the pandemic struck weeks later, and she quickly fell behind on rent.

Her landlord at XS Management filed for eviction before the moratorium in March and continued the case in June. Joseph spent weeks waiting for SDC to process her application, only to learn that she missed a step that has tripped up other tenants in crisis: She had to first apply for energy assistance.

Joseph is waiting for a reply after taking that step, but she now plans to move out before her Sept. 15 court date.

Recognizing Milwaukee’s chronic housing crisis, the county joined a coalition of renters, landlords and nonprofits two years ago in laying the groundwork for a Rental Housing Resource Center.

The pandemic scuttled plans for a planned physical opening in July, but a coalition is teaming up remotely to try to plug the mammoth gap in state housing aid, said Deb Heffner, housing strategy director for Community Advocates. Her group has distributed just over $1 million in rental assistance to 600 families through mid-August to families in Milwaukee County.

But as the pandemic continues, advocates worry that even keeping tenants in their homes will be short lived as people struggle to find work.

“We may have just staved off an eviction for now, for it to only happen in a few months,” Lipo Zovic said. “We’re filling the hole behind us — and there’s a hole in front of us that’s opening.”

The nonprofit Wisconsin Watch (wisconsinwatch.org) collaborates with WPR, PBS Wisconsin, other news media and the University of Wisconsin-Madison School of Journalism and Mass Communication.