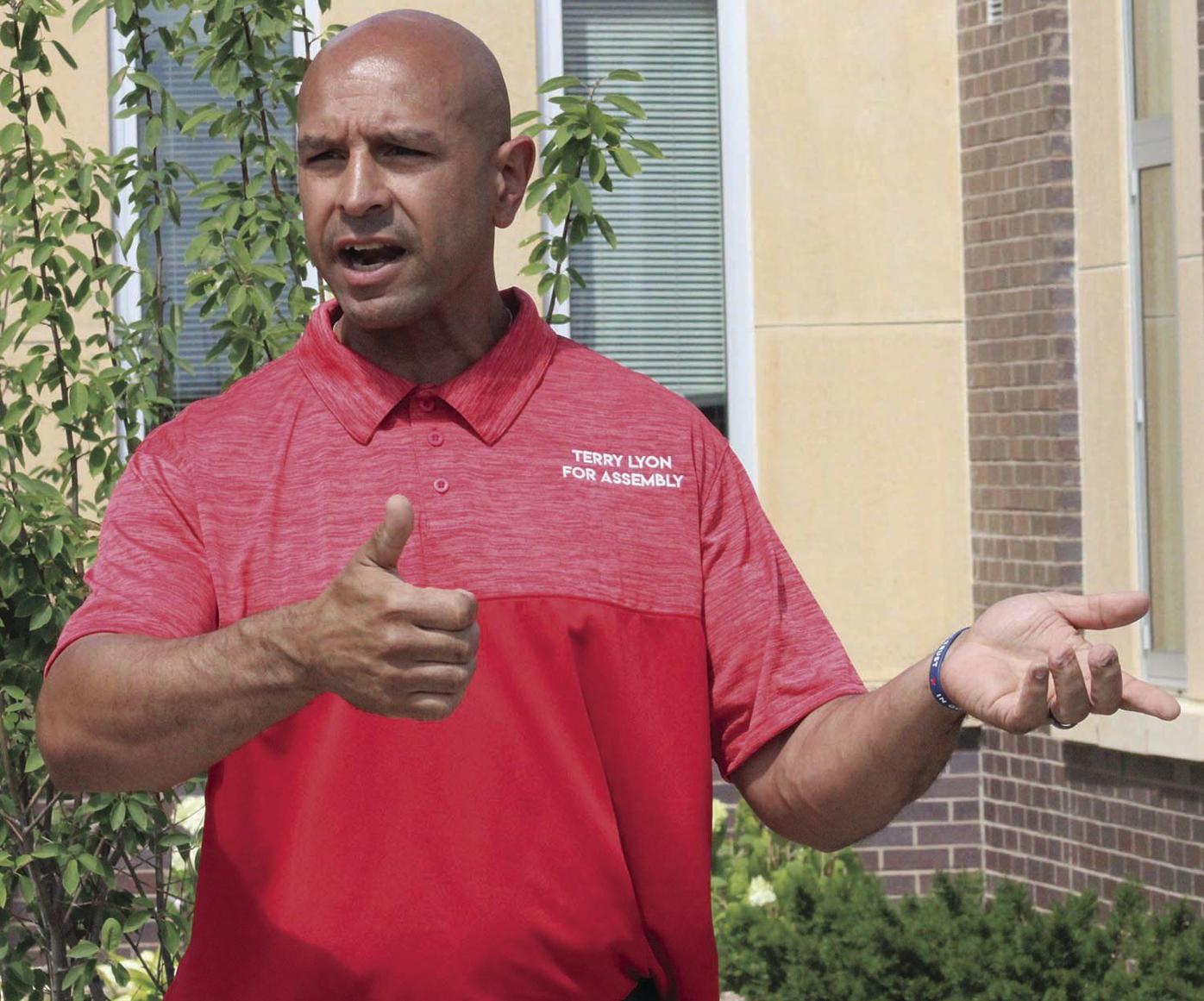 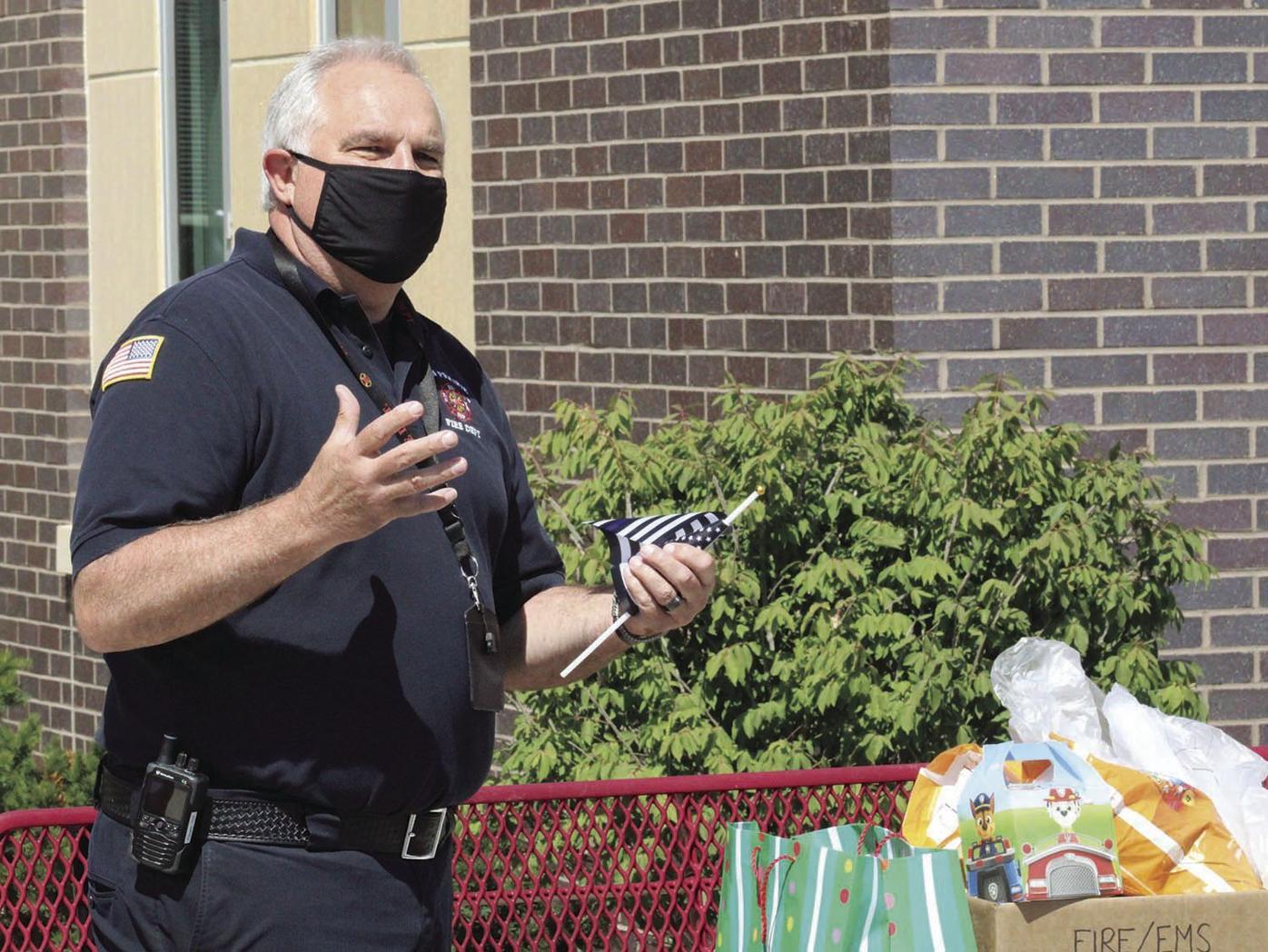 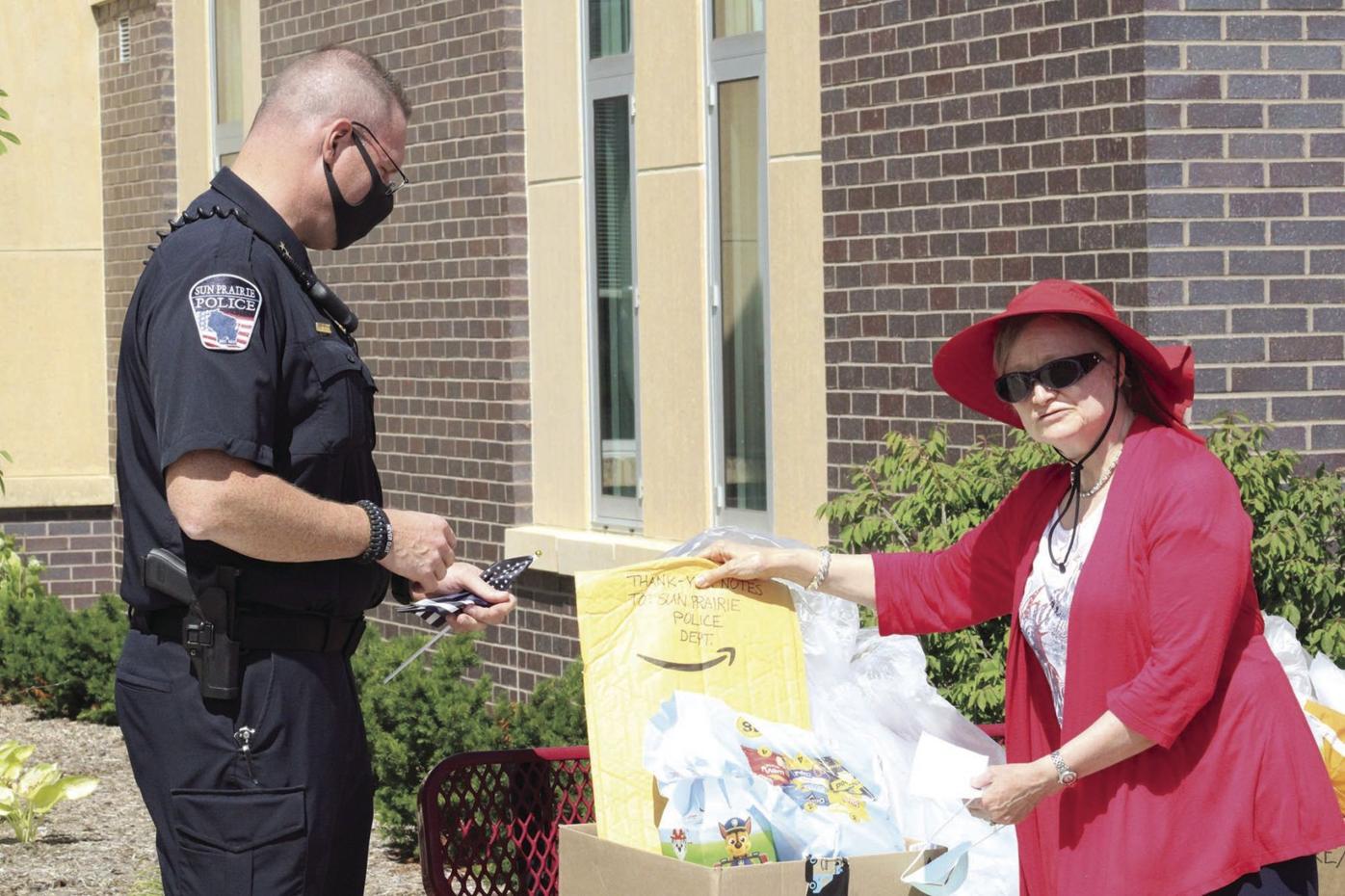 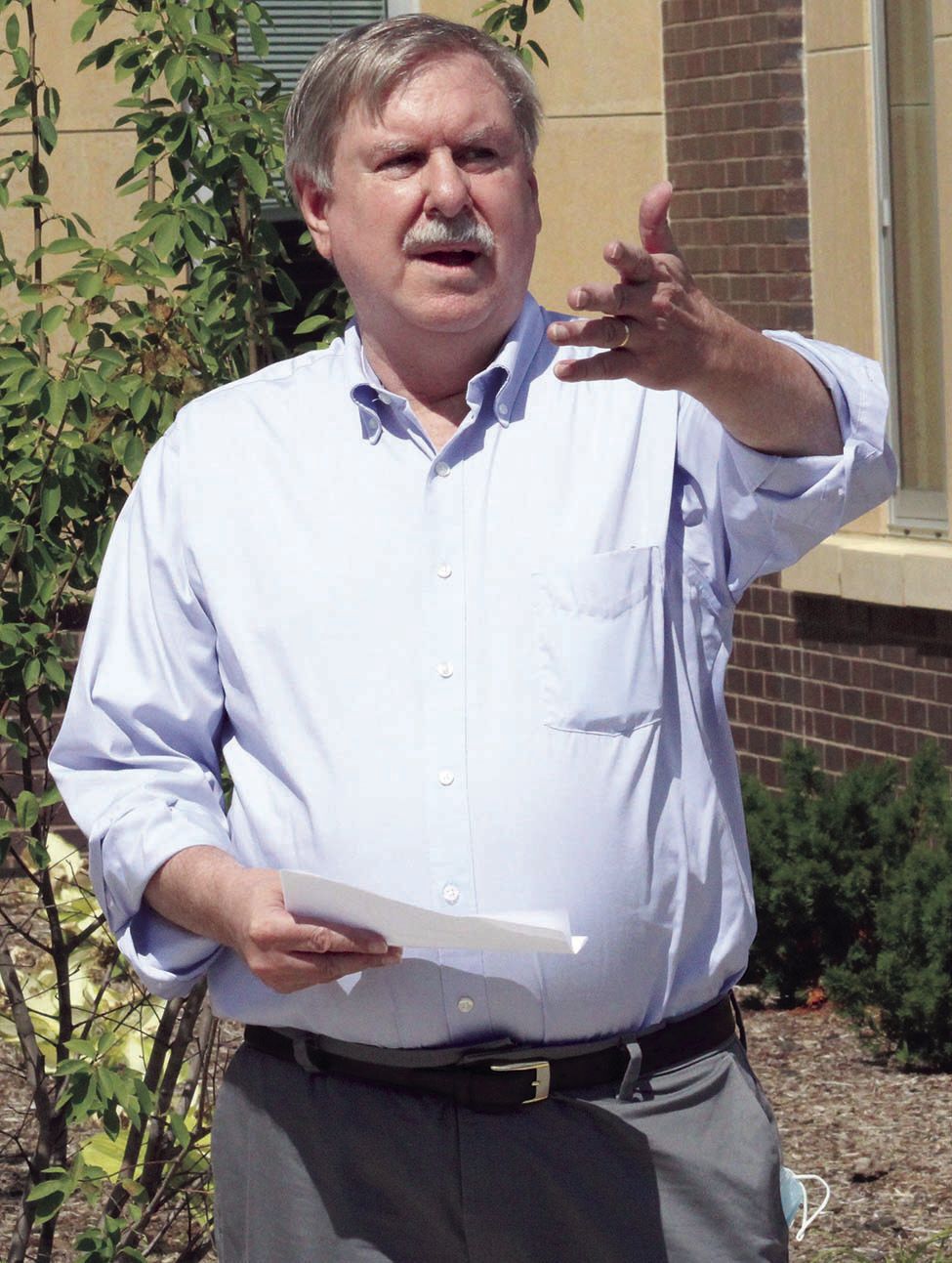 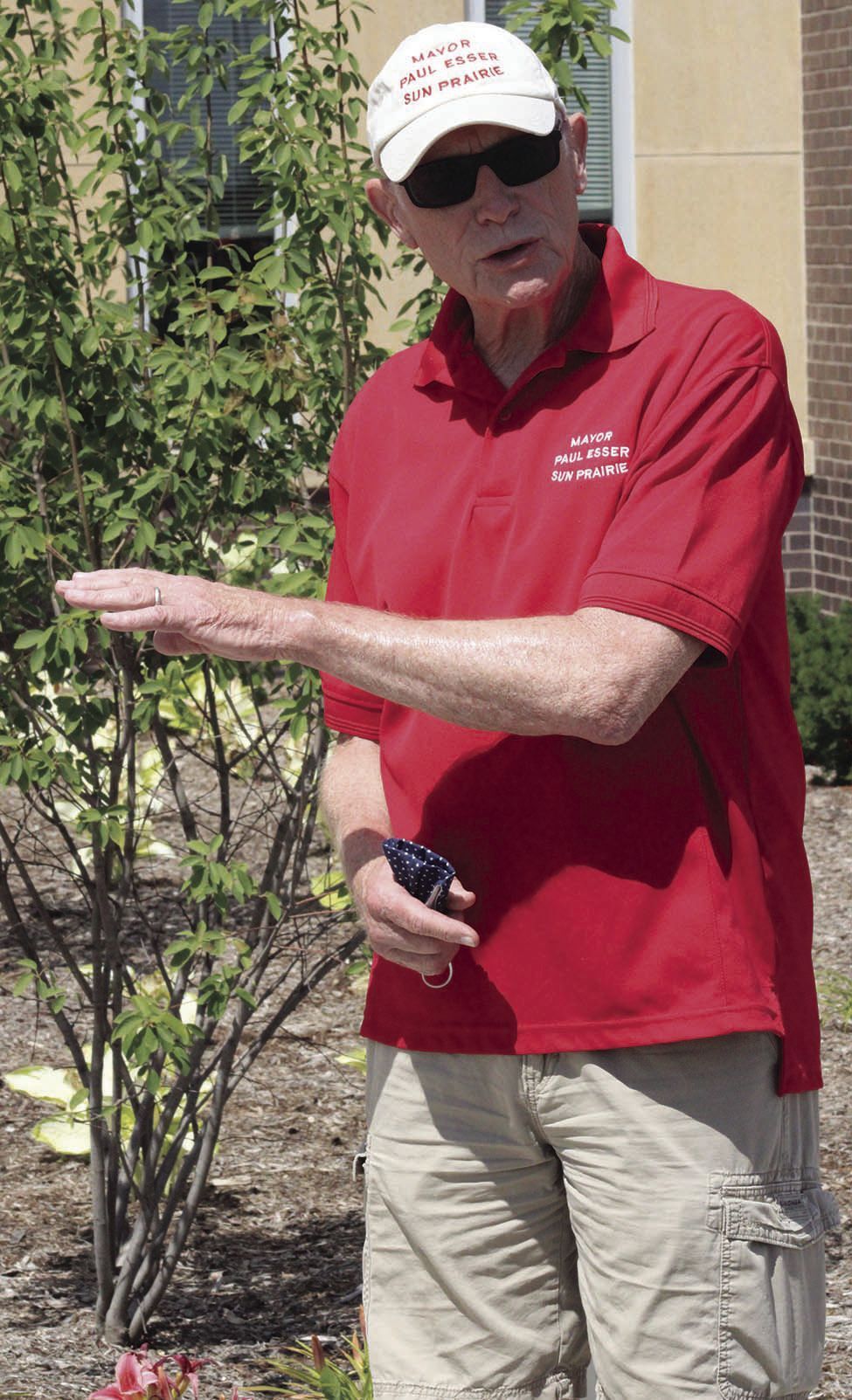 Care-A-Van participants backed local emergency responders by showing off the red, white and blue during the July 22 event that included a brief presentation along with treats and thank you letters given to Sun Prairie police, fire and EMS personnel. 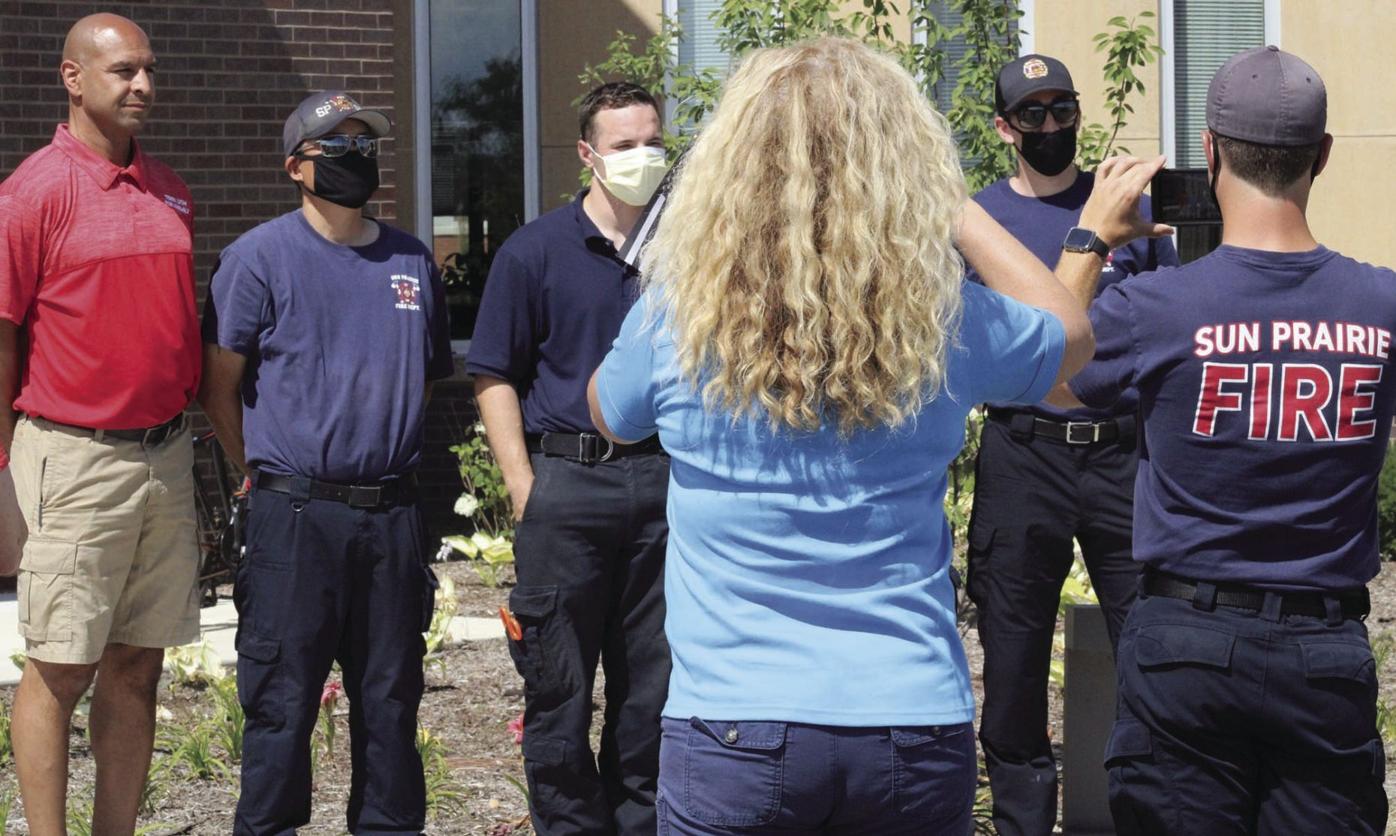 Care-A-Van participants backed local emergency responders by showing off the red, white and blue during the July 22 event that included a brief presentation along with treats and thank you letters given to Sun Prairie police, fire and EMS personnel.

The event began with a caravan of vehicles flying U.S. flags in support for local EMS, police and firefighters. The caravan lined up in the parking lot at Sun Prairie High School, proceeded north on Grove to Main, then west on Main all the way to the Westside Community Service Building. Sun Prairie first responders also received treats and thank-you letters showing the support of individuals.

Sun Prairie police, fire and EMS personnel gathered near the entrance to the building and accepted the treats and thank you letters, with their chiefs doing most of the talking.

“Thank you so much,” remarked Sun Prairie Police Chief Mike Steffes. “Thank you everyone for coming out. This means a lot to us.”

“I can’t tell you how much I appreciate the support,” said Sun Prairie Fire Chief Chris Garrison. “We’ve got an amazing community, an amazing family-based area. And, I just can’t say more about our leadership and everything that you bring to us. Thank you so very much.”

Theron told a story about how he once was lost in midtown Manhattan after taking the wrong subway stop.

“I stepped out into a deserted Manhattan business district at 9 o’clock at night. Skyscrapers and streetlights obscured the sky. Businesses don’t grow moss in Manhattan and the streets rival a Sun Prairie corn maze. So after wandering a while, I saw two of New York City’s finest by their patrol car. And I approached and asked them for directions to my Manhattan hotel. Their response was ‘we’re from the Bronx!’” Theron said, adding that they eventually provided him with directions. “First responders like the police, fire, and EMS . . . for your work, we thank you.”

Lyon said police fire and EMS personnel are often running in when others run away.

“Over the last several weeks, we have seen in my opinion, some very disgusting things about people wanting to attack law enforcement, people who want to help those who are unable to help themselves,” Lyon said. “And if you think about it, the people who attack those who want to keep law and order, what they’re saying is ‘we want disorder, we want mayhem, we want anarchy.’ Well, I, and I believe the rest of you, stand on the side of the men and women who have answered the call to stand up.”

Lyon said he was there with the other roughly 50 people in the group offering any support he could.

Esser recalled how the service personnel did not shy away from the COVID-19 pandemic.

“ . . .And it’s not a matter of social distancing and masks may not even work. And they’re right there. And yet every day they’re there doing those services,” the mayor added.

“And nobody is ever coming to us from these groups saying, ‘Oh, that job’s too dangerous. I’m not going to go in today.’ That has not been an issue,” Esser said. “And it will never be an issue . . . hat’s part of what we need to recognize and respect today.”

Esser also recalled the sacrifice of Sun Prairie Fire Capt. Cory Barr — the firefighter killed in the July 10, 2018 natural gas explosion in Sun Prairie — and that it is a sacrifice each person on duty faces.

“It’s appropriate today that we recognize these men and women, both here and there, but also it’s time for us to remember what Cory Barr gave up that day — he gave up his life and he left a widow and two small children,” Esser said. “And that’s a dedication that these people are asked to do every day . . . so, many reasons to want to be the mayor of the City of Sun Prairie. the opportunity to work with these men and women is absolutely a delight and one that I have a great deal of respect for.

“Thank you for what you do for this community,” Esser said.

“Thank you for all of you that came out to make this an event today.”