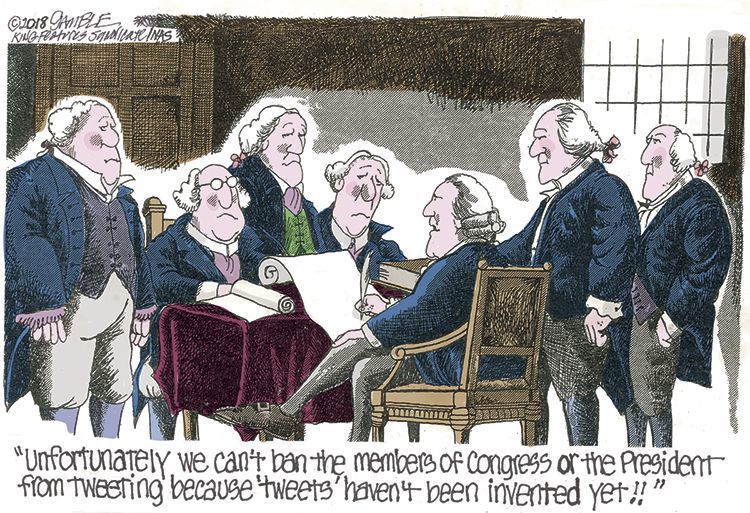 There is Twitter and there is Nitwitter. You decide which this is as the president of the United States was tweeting why he didn’t hold his daily coronavirus briefing:

“What is the purpose of having White House News Conferences when the Lamestream Media asks nothing but hostile questions, & then refuses to report the truth or facts accurately. They get record ratings, & the American people get nothing but Fake News. Not worth the time & effort!”

We have now gotten all too familiar with the ways that the Trumpster lashes out at those who dare contradict him, to say nothing of outright heckling him, for something that he said: When all else fails, blame the media.

And this one was a doozy. He had become a national embarrassment with his stream of unconsciousness questions about using household cleaning products meant to disinfect counters and injecting them into humans:

“And then I see the disinfectant, where it knocks it out in a minute. One minute. And is there a way we can do something like that, by injection inside or almost a cleaning? Because you see it gets in the lungs and it does a tremendous number on the lungs. So it would be interesting to check that. So, that, you’re going to have to use medical doctors with. But it sounds — it sounds interesting to me.”

There were two reactions to that. Doctors, to say nothing of poison control experts, were horrified. Manufacturers of these products were, too. The people who make Lysol put out a warning statement.

But even worse for Trump was the laughter that came raining down, threatening to drown his fragile ego.

True to form, he and his White House flunkies were flailing, putting out ever changing explanations.

By the next day, it was POTUS’ turn: “I was asking a question sarcastically to reporters like you just to see what would happen.”

That didn’t quell the jeering either, particularly since he has pulled these harmful stunts before with his rambling speculation about possible “miracle” cures that would stifle the deadly virus, which had killed so many thousands of Americans and ravaged the economy. His persistent musings about the anti-malaria drug hydroxychloroquine had gutted the supply of the medication and forced researchers to take valuable time to examine the obscure possibility that it worked.

Not only does it not work, but it might cause fatalities, they found, if it was not used for its intended purposes.

So Trump moved on to injecting household disinfectants.

Then it was another day, another briefing.

They have often lasted two hours, featuring mainly Donald Trump, treating his assembled experts as his supporting cast, and treating the national tragedy as a political opportunity. This briefing lasted all of 22 minutes. It consisted mainly of the president reading a statement and then departing without reporter questions, looking to all the world like he was fleeing.

Then the next day, nothing.

Trump had retreated to his Twitter refuge — or Nitwitter, if you prefer — where he can fire off invective without questions from pesky newspeople.

Meanwhile, the national resolve to beat this deadly invader is starting to crumble. Efforts in some states to reopen prematurely have already begun and could cause new flare-ups of COVID. Meanwhile, President Trump will always find scapegoats.

How about the media?

Bob Franken is an Emmy Award-winning reporter who covered Washington for more than 20 years with CNN; opinions expressed are his own.