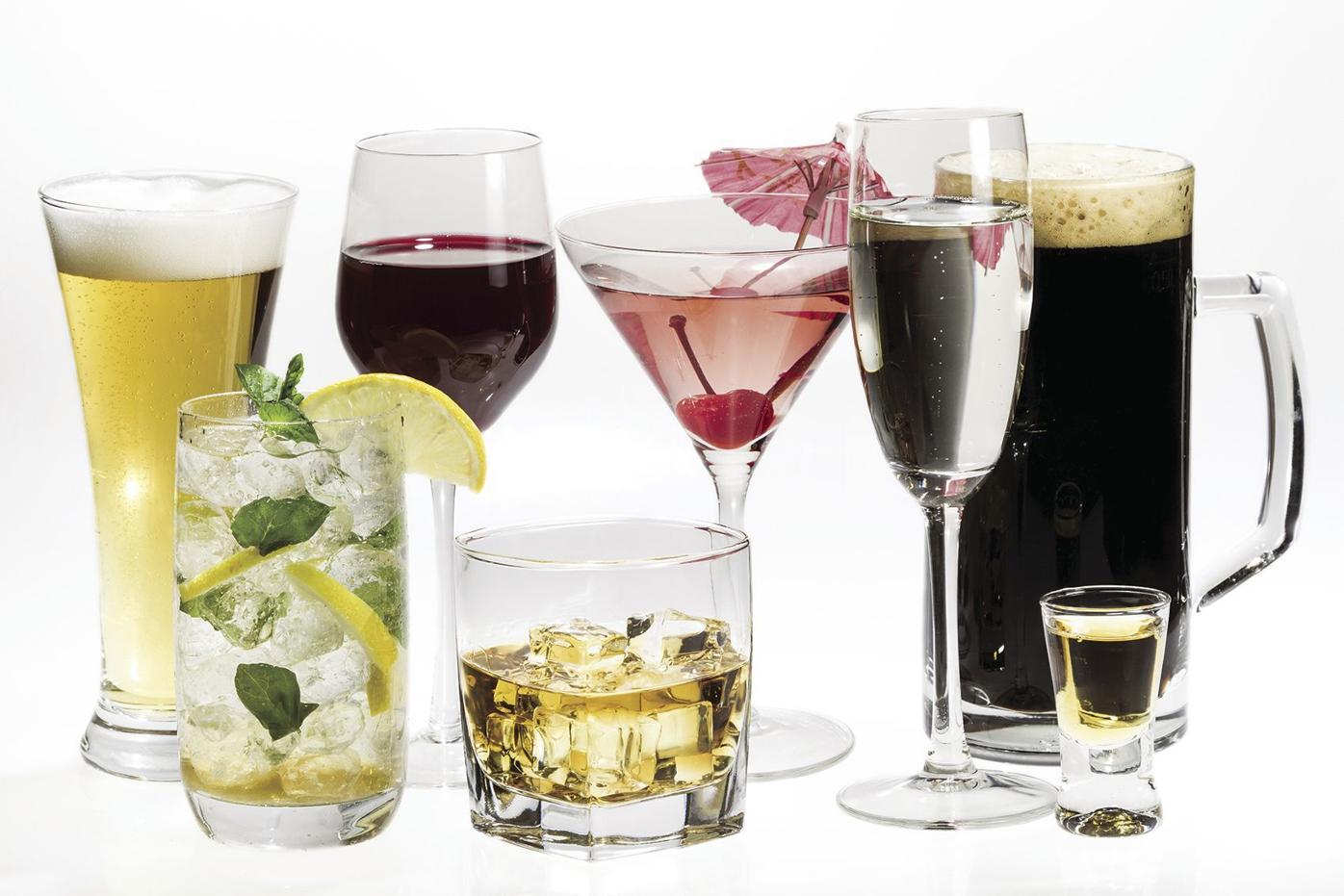 State excise tax revenues from the sale of alcoholic beverages rose nearly 17% in the 2021 fiscal year, an annual increase that tops any seen in nearly five decades in Wisconsin. 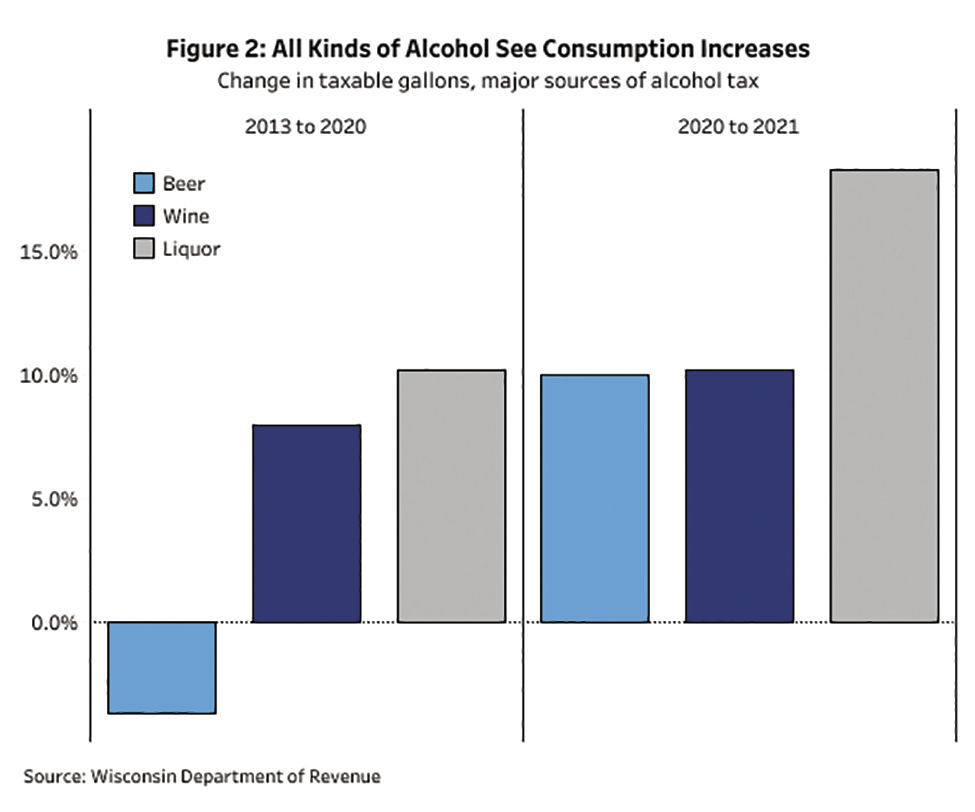 State excise tax revenues from the sale of alcoholic beverages rose nearly 17% in the 2021 fiscal year, an annual increase that tops any seen in nearly five decades in Wisconsin.

State excise tax revenues from the sale of alcoholic beverages rose nearly 17% in the 2021 fiscal year, an annual increase that tops any seen in nearly five decades in Wisconsin. While the impact of the pandemic on alcohol use is difficult to evaluate, this trend may bear watching moving forward – in part because excessive alcohol use is among Wisconsin’s longstanding public health challenges.

Revenues from the state’s excise taxes on alcoholic beverage sales rose to $73.8 million in the 2021 fiscal year that ended June 30, a 16.6% increase over the $63.3 million collected in fiscal year 2020, according to preliminary data from the Department of Revenue (DOR). These collections come from state taxes with rates that vary depending on the type of alcoholic beverage: beer, wine, hard cider, or liquor.

According to figures from the state’s Annual Fiscal Report (AFR) and the preliminary DOR data, 2021 is likely to mark the largest percentage increase in alcohol tax revenues in Wisconsin since 1972 (see Figure 1).

In more than six decades of available data, the only two fiscal years with larger percentage jumps – 1972 and 1964 – had increases in wine tax rates. The 1972 fiscal year also included a liquor tax increase and a lowering of the legal drinking age.

Hard cider is taxed at 6 cents per gallon if its alcohol content is less than 7%; if it exceeds that level, it is taxed at the same rate as wine. Distilled liquor, meanwhile is taxed at a far higher rate: $3.25 per gallon.

In addition, the state’s general 5% sales tax also applies to alcohol sales and is collected by retailers based on price – we did not look at any state of Wisconsin data on general sales taxes.

Wisconsin has long ranked among the bottom tier of states for the rates at which it taxes alcohol. Its beer tax rate is among the nation’s lowest, ranking 48th among the 50 states in 2021, according to the Tax Foundation.

Two of the other states with the lowest beer tax rates – Missouri and Colorado – share a tradition with Wisconsin as major beer producers. However, Wisconsin’s wine tax rate also ranks low at 43rd and its liquor rate ranks 41st.

One consequence of this is that – despite the historic magnitude of this year’s revenue increase – its impact to state finances overall will be marginal. However, the public health implications of increased alcohol consumption may be a greater concern – as discussed later in this report.

Increasing revenues, salesWisconsin’s 16.6% preliminary annual increase in alcohol excise tax revenues far exceeds the generally modest increases seen in prior years. Between 2009 and 2020, the percentage increase in alcohol tax collections exceeded 2.4% in only one year. Monthly reported excise tax data from the state Department of Revenue (DOR) appear to validate LFB’s projection. DOR tracks figures on taxable gallons of alcohol as reported by businesses. Those figures paint a similar picture of increased consumption; in fiscal year 2021, taxable gallons increased by double-digit percentages in every category – liquor (18.3%), beer (10%), wine (10.2%), and cider (16.1%) – after seeing declines or only modest growth in each category in fiscal 2020.

The long-term trend here is also illustrative. Total taxable gallons of alcohol increased 8.9% from fiscal 2012 to fiscal 2021. Within that period, however, there were large differences in the increase by alcoholic beverage type – especially between the two beverage types that by far provide the most tax revenues.

The taxable gallons and revenue data are reported to DOR on a monthly basis, reflecting tax returns processed in the months listed. DOR indicates that its figures reflect the timing of revenues received, regardless of when the returns were due.

We analyzed the DOR monthly excise tax revenue totals since the onset of the pandemic relative to the same months a year earlier. They show an initial surge of increased alcohol tax revenues in April 2020, much more modest increases in the following months, followed by larger increases in the late summer and early fall. Monthly revenues saw sustained but smaller year-over-year increases from November through February before surging again to end the fiscal year.

Here we rely on figures from the U.S. Census Bureau’s Quarterly Summary of State and Local Tax Revenue, which goes through the first quarter of this calendar year, or March 31, 2021. These include selective sales tax and excise tax revenues at the state and local level applying specifically to alcohol. In Wisconsin, this is essentially excise taxes. For the 12-month period that ended on that date, Wisconsin’s 11.4% increase in alcohol tax revenues was the sixth-largest of any state, these data show.

Due to differences in how each state taxes alcohol, the data and methods used in our analysis do not permit these figures to be compared between all states on an apples-to-apples basis. For example, some states that recorded declines in alcohol tax revenue over the past year place an additional selective sales tax on on-premise alcohol purchases – meaning sales that occur in establishments where the alcoholic beverage is also consumed, such as bars or restaurants. Given that many bars and restaurants were closed or operated on a limited scale for much of the pandemic, revenues from on-premise alcohol sales at those establishments likely were greatly reduced.

If we remove the states that tax on-premise alcohol sales more heavily, combined revenues for the remaining 41 states during the 12 months ending March 30 rose 4.9%.

In other words, though many other states have seen a rise in alcohol tax collections, the increase has been greater in Wisconsin than in all but five of the 41 states. It is difficult to draw firm conclusions about how Wisconsin fares nationally because of the state-to-state differences in alcohol tax rates and structures – the difference in tax treatment of on-premise sales, cited above, is just one example. Another major difference is that in some states, alcohol sales are made in municipal or government stores or the state controls their sale in some other way – for liquor sales, these controls apply in 17 states. However, these figures for Wisconsin may give at least some reason for concern given the public health impacts associated with excessive alcohol consumption.

ConclusionSince March 2020, Wisconsin and every other state has dealt with the consequences of the pandemic, including restrictions on gatherings and social interaction. For individuals, this period also may have generated increased stress about personal health and the health of loved ones, lost or reduced employment, fewer work or leisure activities, and challenges with school and child care. During such a period, it is perhaps unsurprising that alcohol sales increased in Wisconsin.

Yet it also is clear that excessive alcohol use is a leading public health concern in Wisconsin. Surveys routinely show Wisconsinites engage in binge drinking more frequently than residents in most other states.

WPF research has shown recent increases in alcohol-related driving deaths in Wisconsin during the pandemic. Previously, we found total deaths related to alcohol in Wisconsin have been increasing, as has been true nationally, over the last two decades. This includes deaths for which the primary cause is alcohol, such as liver disease and alcohol poisoning, as well as fatal accidents in which the deceased person is intoxicated.

In light of these and other considerations, it will be important to monitor alcohol sales closely to determine if the marked increase in sales and presumably consumption observed in fiscal year 2021 is a one-time byproduct of the pandemic or the beginning of a longer-term and possibly harmful trend. In some cases, individuals may increase alcohol consumption while maintaining moderation. However, if rising consumption levels continue and additional public health impacts materialize, then policymakers may need to consider further steps to discourage harmful levels of drinking or related behaviors such as intoxicated driving.

This information is provided to Wisconsin Newspaper Association members as a service of the Wisconsin Policy Forum, the state’s leading resource for nonpartisan state and local government research and civic education. Learn more at wispolicyforum.org.