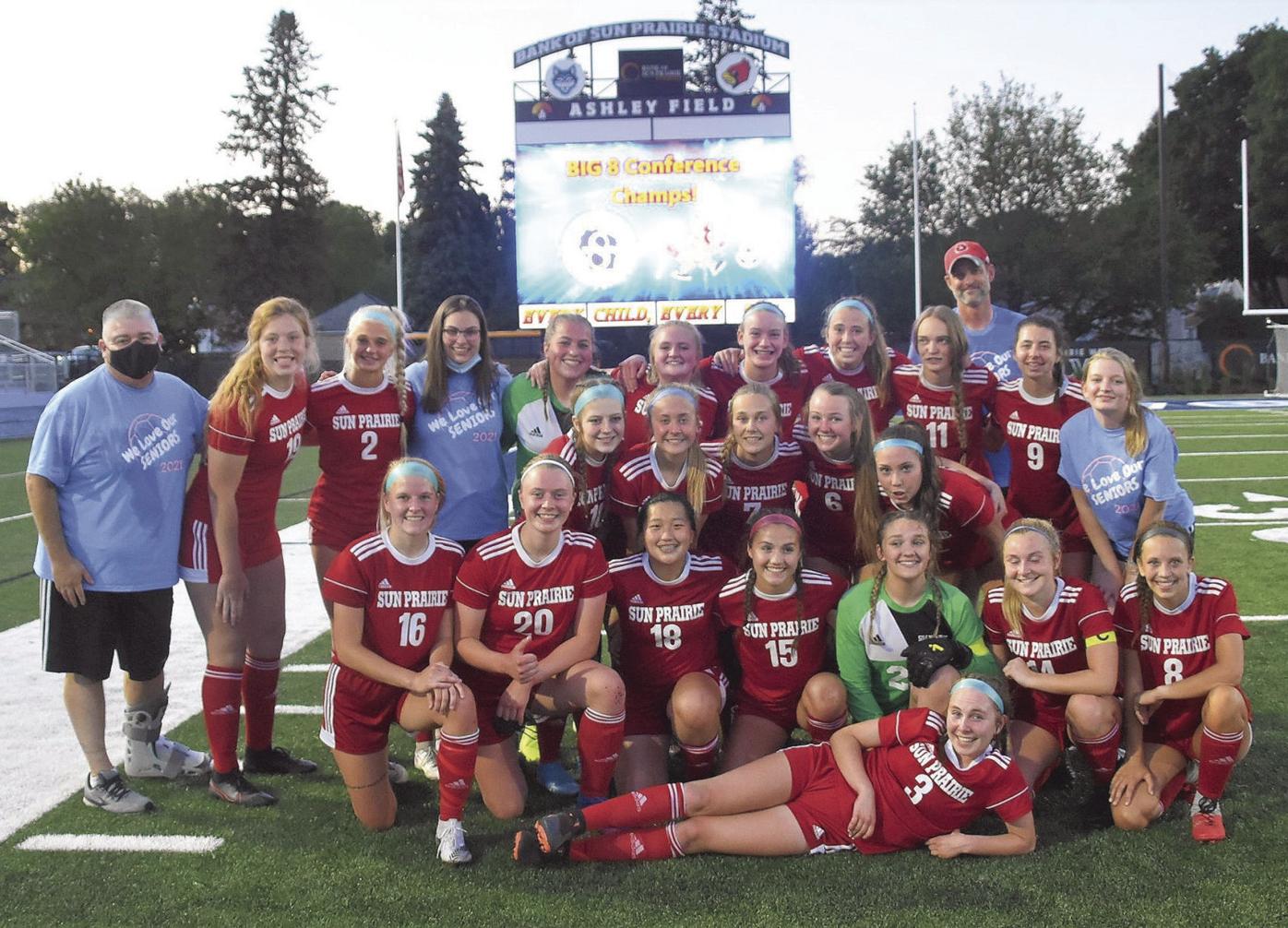 Erin Davidson (8) attempted a shot on Janesville Parker Goalkeeper Ellianna Trilling during the Cardinals’ 10-0 win over Parker in Bank of Sun Prairie Stadium at Ashley Field. 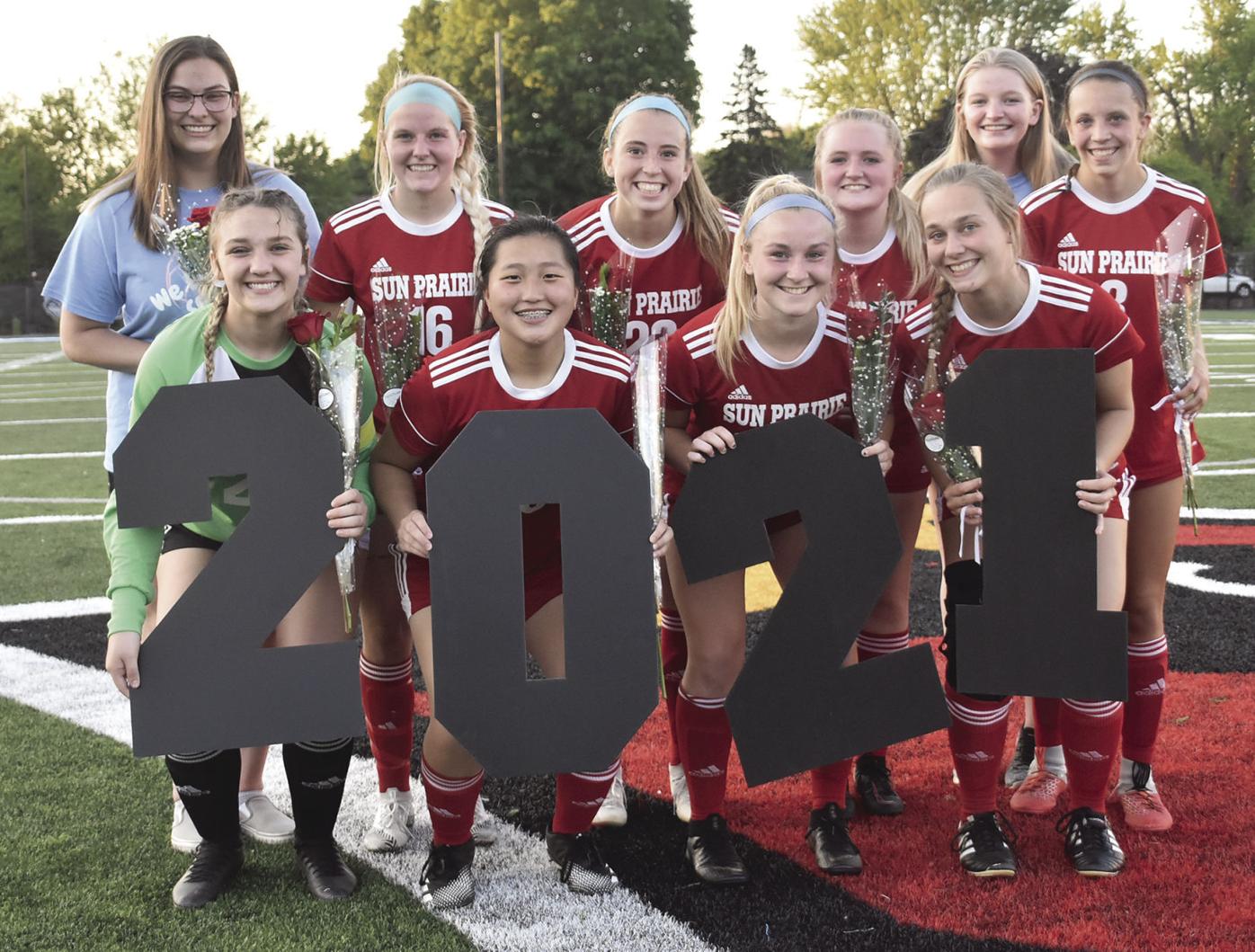 Erin Davidson (8) attempted a shot on Janesville Parker Goalkeeper Ellianna Trilling during the Cardinals’ 10-0 win over Parker in Bank of Sun Prairie Stadium at Ashley Field.

Senior night is always a night to remember for the soon to graduate Cardinal girls’ soccer team members. Wednesday, June 2 was a senior night for the soccer programs history books.

COVID -19 attendance restrictions had been lifted, and a strong contingent of students and community members came out to show their support. They were not disappointed, as the Sun Prairie girls’ soccer team celebrated the class of 2021 by blanking Janesville Parker 10-0 and locking up the Big 8 conference championship.

“Parker was even a bigger game than we anticipated . . . senior night and the conference championship, rolled into one celebration,” explained Head Coach Matt Cleveland.

“We took care of business early in the season to set ourselves up for this night,” Cleveland added. “This night was especially important to our seniors”, as they all have been dedicated to the program throughout their high school years.

They all missed out on a season last year, Cleveland said, stayed positive through the challenges of this year, and “now they get to close out their last season with the first conference championship ever in school history.”

All 8 Sun Prairie seniors took the pitch to start the game, including Haley Winter, who suffered a season ending knee injury early on.

“Having Haley at the kickoff gave us a good start…everyone was emotionally invested” from the start, said Cleveland. The seniors had some pressure on them to win the championship, and entire team “gave the game and the win” to them, the coach said.

Senior keeper Jillian Buenger did her job defending the goal and directing the defensive play.

She had 1 save on the shut-out night.

Senior forward Maddie Strey had an “out of this world” night up top, notching four goals (unassisted goals at 2:07, 10:29, off an assist from senior midfielder Emily Olson at 21:22 and another unassisted goal at 36:29) and not letting anything stop her.

Sophomore Lucy Strey was called up from JV to join her sister on the field, and she also scored a goal at 7:18 off an assist from sophomore Ellianna Trilling.

“Our seniors scored 8 of the 10 goals,” said Cleveland. “Their leadership and work ethic were on display the entire game, and everyone did their job.”

Senior outside back Addie Dillon helped shore up our defense, which only allowed Parker to take one shot on goal.

Senior midfielder Madi Beutel helped control the midfield and was just unlucky in getting a shot in the nets. Overall, the Cardinals made 33 attempts to score, with 26 of those shots on net.

The Cardinals ended the game at 67:58 when sophomore Josie Langhans knocked in a penalty kick for the team’s 10th goal.

The entire team rushed the field, dousing Cleveland with water in celebration.

“It was the icing on the cake for the senior’s career to win us a championship…I am so proud of the seniors and the entire team,” remarked Cleveland post game.

“For 18 years, the girls’ soccer program has continued to get better. We started out at the bottom of our conference . . . working our way to the top of a very competitive conference,” Cleveland said.

The Cardinals traveled to Waunakee High School Friday June 4 for a “regional play off practice.”

The Cardinals and the Warriors are both at the top of the region and may possibly see each other again in post season play.