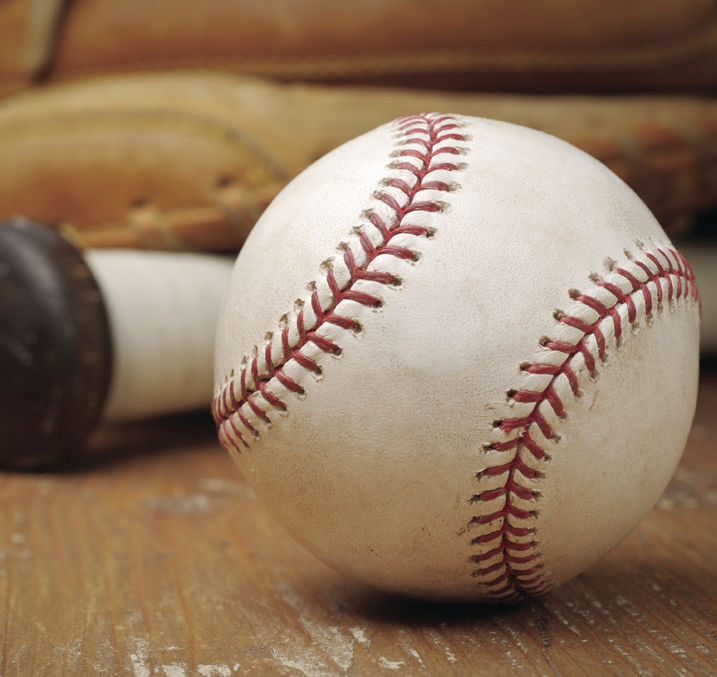 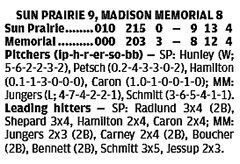 It was either expand or contract last Friday at Mansfield Stadium as Big Eight Conference baseball leader Sun Prairie met second-place Madison Memorial. On the line was whether the Cardinals would expand their league lead to two games or the Spartans, having two conference losses, would move into a first-place tie with Sun Prairie.

The outcome came down to the wire as the Cardinals survived a late surge by Madison Memorial, escaping with a 9-8 victory. With four league games remaining, Sun Prairie has a two-game advantage over the Spartans. The win lifted the Cardinals’ conference record to 13-1 and 17-1 overall.

“We knew they had a really good and solid team all around,” said Sun Prairie head coach Rob Hamilton of the Spartans. “So we knew it was going to be a really good battle and it turned out to be one.”

Although it was an important game considering the closeness in the standings, Hamilton said that aspect was never really talked about.

“We knew we were facing a really good team and a really good pitcher, but we just worry about taking care of ourselves and we always feel that way,” he said. “We don’t feel we ever have to do anything special or play out of our heads to win. If we play our game, we feel pretty confident that we’ll be able to win a lot of games.”

Nevertheless, the match-up was not for the faint at heart as the two teams combined for 25 hits — 13 belonging to Sun Prairie — and each team had four errors. The Cardinals entered the bottom of the seventh inning with a 9-5 lead before Madison Memorial rallied for three runs before its comeback ended.

Sun Prairie never trailed in the game, but the Spartans never made things comfortable for its visitors by staging several rallies. The Cardinals scored the first run after two were out in the second inning. Durlin Radlund doubled and scored on Carter Wambach’s single. Neither team scored again until Sun Prairie added a pair of runs in the fourth. A pair of Spartan errors and a single by Radlund led to the two runs.

Madison Memorial used a walk, a double and a single to score two runs in the fourth inning to cut the Cards’ lead to 3-2.

Singles by Carson Shepard, Davis Hamilton and Josh Caron put a run on the scoreboard for Sun Prairie in the fifth inning.

A five-run sixth inning, leading to a 9-2 advantage, was highlighted by singles from Radlund, Brady Stevens, Shepard, Hamilton and Caron, along with a Memorial error.

Three singles, a double and two walks ignited a three-run sixth inning that closed Sun Prairie’s lead to 9-5. Hamilton said a key play in the game was Radlund fielding a ball in centerfield that led to him throwing to Shepard at second base who in turn threw to third baseman Liam Moreno, who tagged out a runner trying to advance.

Memorial then made things interesting in the seventh as the first three batters reached on an error, a double and a hit batter. A sacrifice fly scored the first run followed by a single to load the bases. A ground out scored a runner and a wild pitch narrowed the Cards’ lead to 9-8. But Caron struck out the next batter to end the game.

“We told the kids after the game that we didn’t close this one like we should have,” said Hamilton, “but we’re getting on the bus with a win. And that’s what we came here for and you never walk out of a game totally thrilled with every aspect of the game and we know we have to get better.

“We couldn’t put them away and they had too many two-strike base hits. But credit to Madison Memorial. They are down 9-2 and they just kept battling. So it was a good game.”

Offensively, Sun Prairie was led by Shepard and Radlund, who both went 3x4. Shepard drove in two runs and scored twice, while Radlund scored three times. Hamilton and Caron were both 2x4 with Caron driving in a pair of runs and Hamilton finishing with one RBI. Stevens (RBI) and Addison Ostrenga were 1x3 and Wambach was 1x4 with an RBI.

For his many years of service and dedication to SPHS athletics, and as long-time baseball statistician, Bob Vitense threw out the first ceremonial pitch last Saturday afternoon at Summit Credit Union Field.

But it was the next 69 pitches that junior Ethan Petsch threw that made the difference in the Cardinals’ 5-4 win over Iowa City in a non-conference game. The victory put Sun Prairie’s overall record at 18-1.

“It’s the third time he pitched this week and he just did a tremendous job,” said Hamilton. “He struggled a little bit in the first inning and then he went to the stretch and he felt more comfortable and was able to keep the ball down, hit his spots and mix up pitches. He kept them off-balance the whole game.”

Petsch, who gave up just four hits, walking two and striking out one, was lifted after walking the first batter in the top of the seventh. And that’s when things began to look like the day before when Sun Prairie survived a last-inning rally by Madison Memorial for a 9-8 win.

Iowa City used the same script, pretty much, as the Little Hawks, trailing 5-1, rallied for three runs in the seventh. Caron, on in relief of Petsch, struck out the first two hitters he faced. But a two-run infield error and an RBI single by Iowa City’s leadoff hitter narrowed the margin to 5-4. Caron, like the previous game, struck out the next batter to end the game.

“Credit to them, just like Madison Memorial last night,” said Hamilton. “They didn’t quit and so it was nice to close it out.”

Sun Prairie jumped out to a 2-0 lead in the first inning. With one out, Davis Hamilton was hit by a pitch and Caron and Liam Moreno followed with RBI doubles. After going down in order in the second, Addison Ostrenga began the third inning with a double and he scored on Shepard’s single for a 3-0 lead.

A pair of singles and a sacrifice fly accounted for Iowa City’s first run in the fifth inning. But Sun Prairie matched that run in the bottom of the fifth on Shepard’s RBI double.

The Cardinals added what proved to be the winning run in the sixth as Radlund singled with one out, stole second and scored on Stevens’ ground out.

Sun Prairie’s defense also played a role in the victory as Shepard made a pair of eye-catching plays at second base as did Hamilton at shortstop. And Radlund made a perfect throw from center field to the plate that would have been an out had the runner not kicked the ball out of the catcher’s mitt.

“I thought we played decent overall,” said Hamilton. “These are the type of games that test your character and we know we can win these one-run games. We’ve won five out of six one-run games, so that really is a test of our character.”

Offensively, Shepard and Wambach were 2x3 with Shepard driving in two runs. Caron (RBI), Moreno (RBI), Radlund and Ostrenga each had one hit.

The victory capped off a special day that honored Vitense. “Well deserved for Badger Bob,” said Hamilton. “He’s unbelievable for all of our sports. We, obviously, love him here for baseball and wanted to recognize him. And it was nice to have his son Kurt (Iowa City assistant coach) here as well and be a part of this. He’s just first class and we’re just glad he’s part of our team.”

The Cardinals were set to host Beloit Memorial Monday (5 p.m.) in a make-up game. Sun Prairie remains at home to host Madison Memorial on Tuesday, June 8 and Middleton on Wednesday. Both games are at 5 p.m.

Sun Prairie then travels to Middleton on Thursday (5 p.m.) and hosts Waunakee this Saturday at 11 a.m.