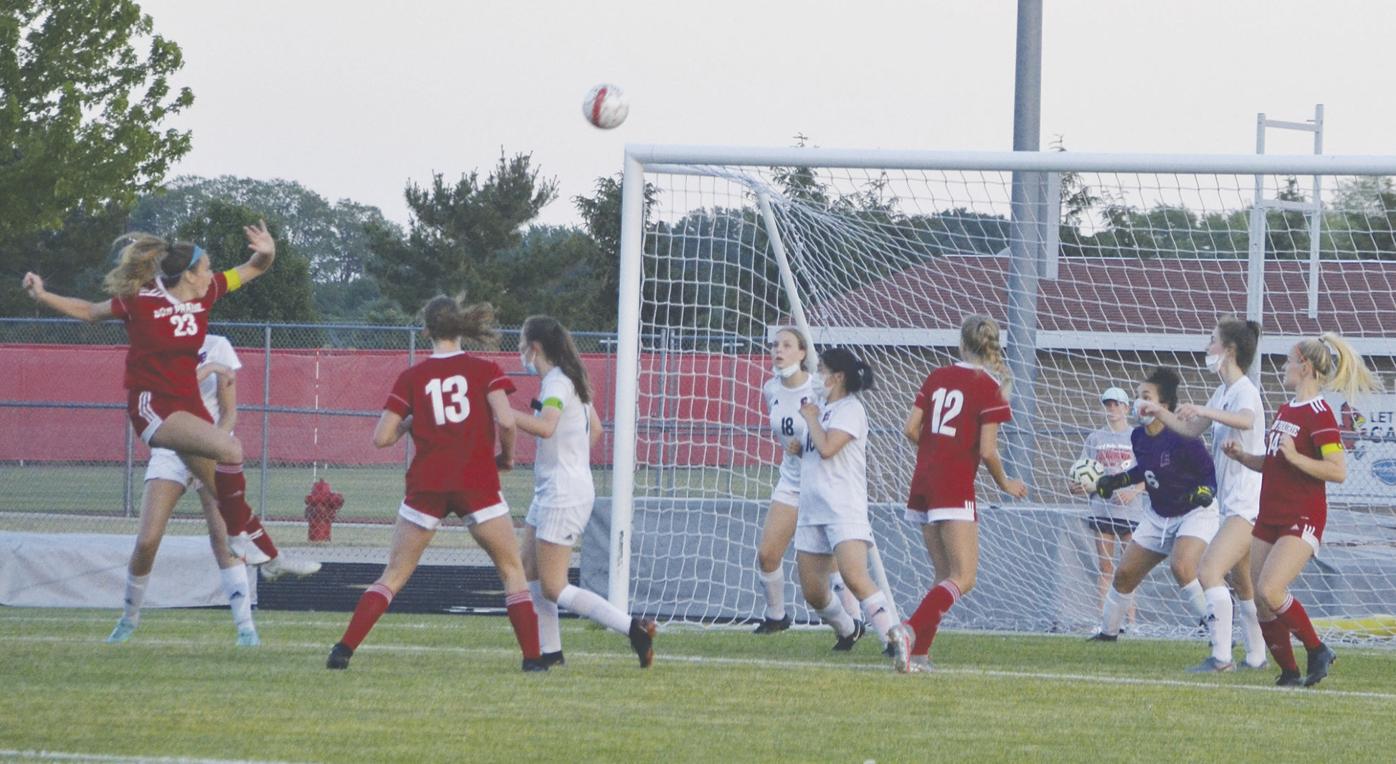 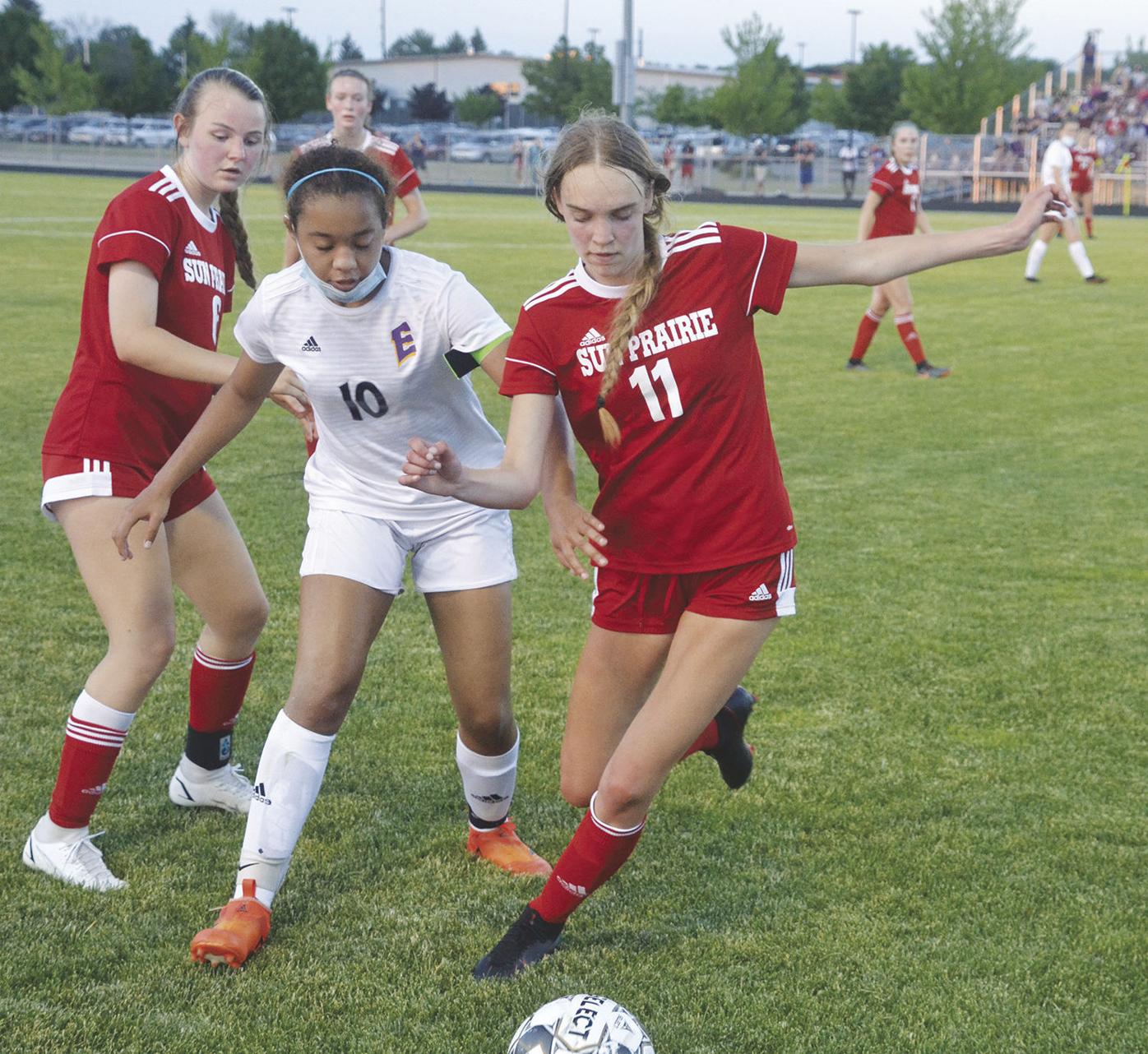 The Sun Prairie High School girls’ soccer team (9-5-1 overall, 8-1 conference) started out the 2021 season with a goal to have fun and take the season as it unfolded.

COVID-19 concerns and restrictions, the loss of the 2020 season and a compacted 2021 season were taken in stride by the team. Their mantra, “Here We Are…” speaks to this day-to-day approach and their need to be out on the pitch and just play.

The result so far? The most conference wins in the program’s history, a Big 8 Conference Championship, and a first-round win in regional play.

On Tuesday, June 8, the #2 seeded Cardinals kicked off their post-season run with a 3-1 victory over #7 seed Madison East at home.

“Obviously, this was a big game for us,” remarked Head Coach Matt Cleveland. “Not only was this playoff game a new experience for all but three on the team (returning varsity players and team captains Jillian Buenger, Emily Olson and Maddie Strey), but we knew all too well the struggle” to score two weeks ago. Cleveland was referring to when East hosted Sun Prairie on May 20, when the Cardinals scored the lone goal of the match in the 83rd minute.

Just like the previous meeting, Sun Prairie got off to a slower start than Cleveland wanted.

“I was frustrated with the beginning,” the coach said. “Maybe it was the pressure of a knock-out game or the weird balance of playing on grass (after several games on turf), but we could have done a lot better with possession and pace.”

Several fouls from both teams also slowed down the action, and Sun Prairie was limited to only five scoring attempts before Josie Langhans, unassisted, was able to get the Cardinals on the board at 26:54.

“It was relieving to get that first goal,” Cleveland said. “Josie had a nice shot – actually she told me afterward that she couldn’t even see the goal, she just knew it was there and took the chance to get us the lead.”

The Cardinals took their 1-0 lead into the break. There was more back-and-forth physical play in the second half.

“Both teams wanted this game, and showed good heart,” commented Cleveland. Numerous fouls — from both sides – sent players to the ground in the midst of play.

Then Savannah Miller took the opportunity to send up a powerful through-ball to Strey, who was able to slide it past the East keeper at 61:12. “Maddie showed her strength and senior leadership with that goal,” Cleveland said.

The Purgolders were not ready to give up. A counterattack by East got the ball into the Sun Prairie box, and a resulting scramble for the ball. Keeper Lily Schellpffefer went down in the scrum, and then “all of a sudden an East player got behind her and was in the goal,” Cleveland said.

Schellpffefer was slow to get up, but she was able to shake off the injury to stay on the field. With the score now 2-1, “it definitely made for a more interesting game. Both teams were intense,” noted Cleveland about East’s goal at 62:28.

“Josie finished well, and she had a good game. It was good to have our strikers (Langhans, Strey, Grace Endres, Anna Yang) have a good game up top” and getting shots,” the coach said.

Cleveland also commended the play off the bench.

“We needed our depth and people who could run well and keep the pace up in the heat. The effort of our outside mids, especially Madi Beutel and Erin Davidson, who kept us going when everyone was feeling tired and heavy legs,” the coach said.

“The entire team worked very hard . . . and gave their all. I am proud of the kids and now we get to move on,” Cleveland added.

And what does the coach think is the best part?

“We get to keep on playing,” Cleveland said. “We can be together tomorrow and the rest of the week as we get ready for our next big match.”

Showing, again, the team’s slogan “Here we are!” is quite fitting, indeed.

Sun Prairie will host the Regional Final on Saturday June 12 at 7 p.m. against the winner of the Madison West-Madison Memorial regional semi-final. If the Cardinals win Saturday, they will move on to Sectional play and will most likely face Waunakee (who they lost to last week in a non-conference tilt, 4-0) or Verona.