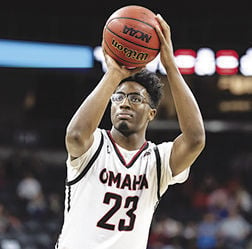 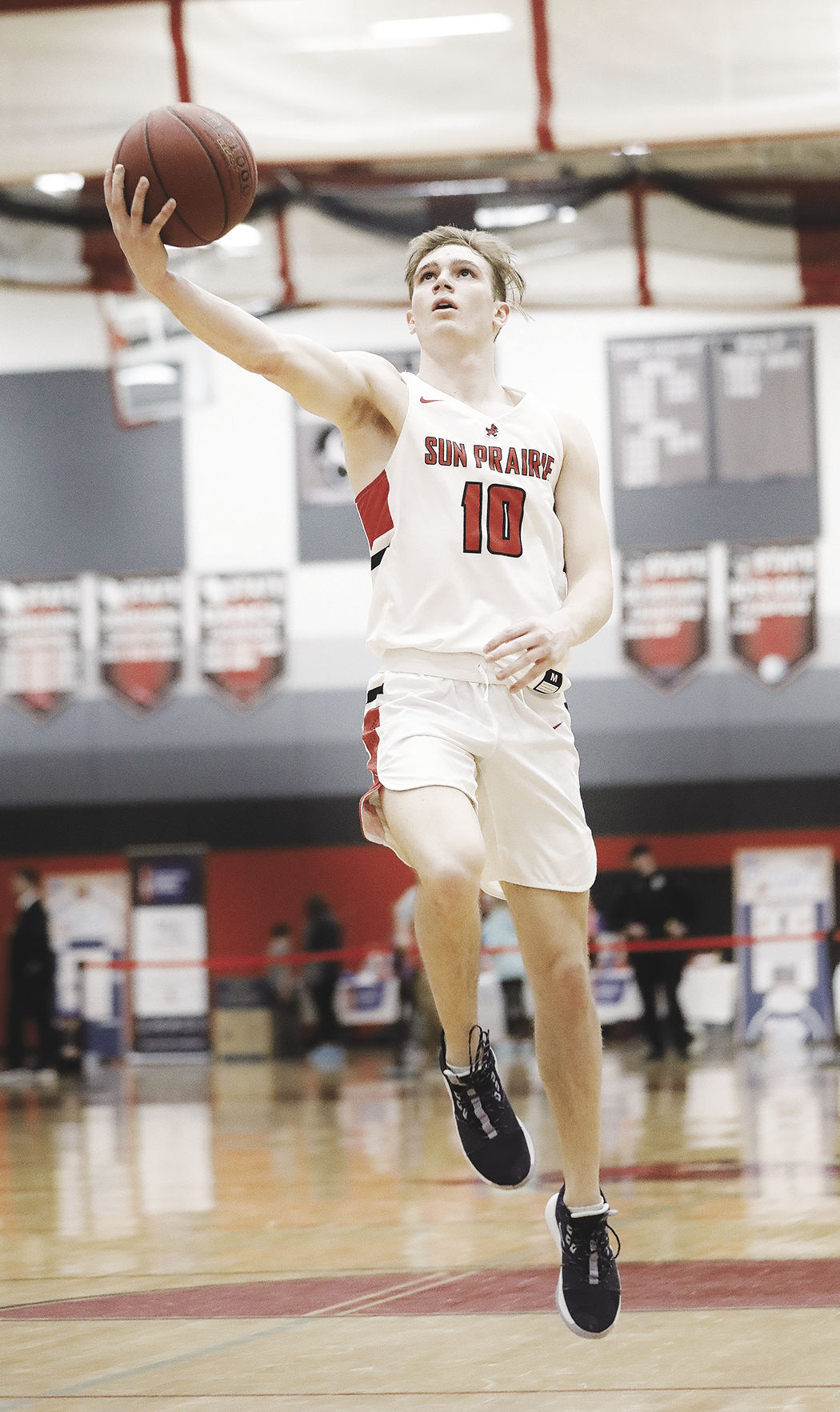 Colin Schaefer played in more postseason games (15) than any other Sun Prairie boys basketball player in history. He decided to transfer out of Green Bay to Navarro.

Colin Schaefer played in more postseason games (15) than any other Sun Prairie boys basketball player in history. He decided to transfer out of Green Bay to Navarro.

Marlon Ruffin and Colin Schaefer both left lasting imprints during their time with the Sun Prairie boys’ basketball program.

Now, they are both looking to be impactful players at new college programs. Each former Cardinal recently transferred so they can better themselves on the court.

Ruffin, a 2018 Sun Prairie graduate, is onto his third college team after transferring to Division I Portland State University in Portland, Ore. Schaefer, who graduated from Sun Prairie in 2020, is off to NJCAA D-I Navarro College in Corsicana, Texas.

Ruffin and Schaefer played together at Sun Prairie for two seasons and created a tight bond. They are both happy for each other on their next basketball journey.

After leaving Sun Prairie, Ruffin played one season at Highland Community College (Highland, Kan.), before heading to the University of Nebraska Omaha for the past two seasons.

“I think he found a good spot for himself,” said Schaefer about Ruffin heading to Portland State.

Schaefer is taking a similar path as Ruffin, starting out at D-I University of Wisconsin Green Bay in his first season before transferring to a junior college.

“He’s got what it takes,” said Ruffin about Schaefer. “He’s a dawg when it comes to trying to get things done. Colin, he’s going to be good; he’s going to make it. I have no doubt in my mind he’s going to bounce back up to D-I after this year, because he’s going to go there and do his thing.”

Making an impact out West

When Ruffin ended up at Omaha, he knew it was only a temporary stop. He wanted to make a name for himself at the smaller Division I school and then move on.

In his two seasons with Omaha, Ruffin became a team leader last year as a junior. He averaged a team-high 13.1 points per game to go along with 3.4 rebounds.

Following this season, Ruffin put his name into the transfer portal and immediately attracted looks from 20-25 programs nationwide. His finalists came down to Portland State, Morehead State and Stephen F. Austin.

“I had Arkansas in the beginning, a few calls, texting here and there,” Ruffin said. “But at Portland State, the coaching staff that they put together and the guys that they’re bringing, it’s an upscale opportunity to where we can really put an exclamation point on our university.”

When it came down to it, the decision to attend Portland State became an easy one, even though Ruffin wasn’t able to meet the men’s basketball coaching staff in person because of the pandemic. He had plenty of reasons to choose the Vikings.

“I definitely wanted to get out of the Midwest, for one,” Ruffin said. “Two, a new coach, a younger coaching staff. I really enjoy connecting with them and chatting it up with them. Every day, I’ve been texting, and being able to find our connections already before I even got to meet them in person yet.

“On the basketball side, it’s a new spot, brand-new facilities and it’s a very well taken care of program. Based on what they told me, I have a very high opportunity to go in and really make a significant, high impact for their program and university and myself.”

Coming up in the fall will be Ruffin’s fourth season playing college basketball. But because of the pandemic, the NCAA granted athletes another year of eligibility. So, Ruffin will be a junior this upcoming season.

“For myself, I’m having a very anticipated year in which the sky’s the limit,” Ruffin said. “I just let my game do the speaking when it comes time.”

Ruffin, 21, believes he fits well into the Portland State program. At 6-foot-5, Ruffin will be a wing who can catch and shoot and bring the ball up the floor, if needed.

Ruffin isn’t shy about his talent on the court. His confidence and play-making ability will be huge assets to Portland State.

“They’re getting someone who is a fierce competitor and someone who is a dawg on every occasion to try and get the win,” Ruffin said. “I’m a very outgoing person; I connect with everyone. I like to see others win, but I really try to hold myself to a high standard of getting things done. I hope to bring that competitive nature to Portland State and reap success.”

In late May, Ruffin was in California training at the Mamba Sports Academy – hitting the weights and the court to become a better player.

Ruffin met up with former high school teammate and friend, Jalen Johnson. The former Sun Prairie star and one-and-done at Duke is preparing for the NBA Draft on June 22. Johnson was in California working out with fellow potential draft picks.

Ruffin had a good experience talking to his talented peers.

“Just being out here and seeing all the other guys and seeing some very notable people and hearing them speak and take it in and analyze it in my own sense,” Ruffin said.

Ruffin plans to head to Portland in the fall and get ready for the season. He has aspirations of playing basketball at the professional level. He’s confident Portland State will give him the opportunity to reach that goal.

Schaefer getting chance to play

When Schaefer left Sun Prairie, he had offers to play basketball at the Division II level. However, he wanted to play Division I and decided to walk on to the Green Bay men’s basketball team.

Schaefer played in 13 games as a true freshman and averaged 1.5 points per game.

“I thought I had a good year,” Schaefer said. “I liked coach (Will) Ryan and had a good relationship with him and the team and started playing well toward the end of the year. But we had seven freshmen with the extra year, so Coach didn’t have any scholarships available. I just decided to try to earn a scholarship someplace else.”

Schaefer decided to transfer out of Green Bay. Navarro head coach Grant McMillan recruited Schaefer out of high school, and landed him this time around.

“It’s a really good league and conference and the coach has a great resume, but he also saw me play in high school, so he’s kind of known me the past couple years now,” said Schaefer, who received a scholarship at Navarro. “He sounds like I’m going to be a pretty big part of what he wants to do next year.”

The 6-foot-0 Schaefer expects to play off the ball in the 2 guard spot mostly in Navarro’s system, but he’ll also be a point guard option. Since leaving Sun Prairie, Schaefer has become a better perimeter shooter.

“I think they’re just going to get somebody that plays hard and competes,” Schaefer said. “I can shoot the 3 pretty well, handle the ball well and compete defensively, so I think that’s what I offer Navarro.”

Even though he spent the majority of his freshman season on the bench, Schaefer picked up a lot of pointers watching Division I games up close.

“When I first came to Green Bay, it’s a lot different than high school basketball,” Schaefer said. “There’s a limited amount of what you can do and you kind of have to trust the offense. So, kind of about halfway through the season I started to figure out, alright, let’s not put the ball on the deck 10 times before you shoot, just kind of work off of screens, so that was a big thing for me.”

Schaefer, who goes into his first season at Navarro as a freshman because of the NCAA COVID waiver, is looking to play just one year at the junior college and then transfer back to a Division I program.

“I want to show (coaches) that I can score at a high level, handle the ball, handle all the pressure and then I also want to show I can defend and compete with those high-level athletes being smaller,” Schaefer said. “I want to show my athleticism.”

Since Ruffin played junior college basketball before jumping up to the Division I level, he provided some advice to Schaefer.

“He just kind of said it’s what you do,” Schaefer said. “He said, ‘If you play hard and well, you’re going to get looked at.”