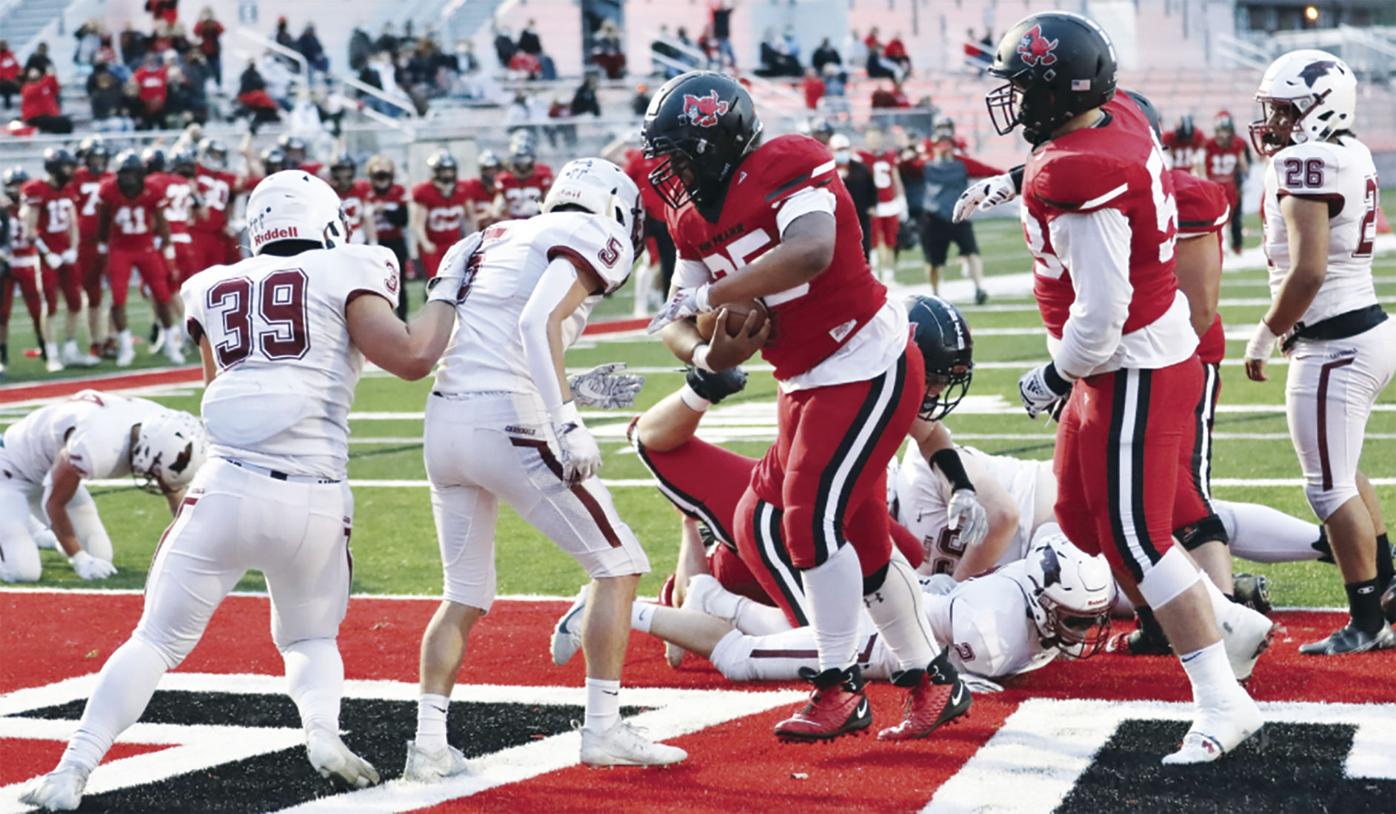 Jay Dayne (#25) scored during the first half of the Sun Prairie-Middleton football game that took place in Bank of Sun Prairie Stadium at Ashley Field on Friday, April 30. Sun Prairie won the game, 38-14, to finish the COVID-19 pandemic-delayed spring season with a 6-0 record. 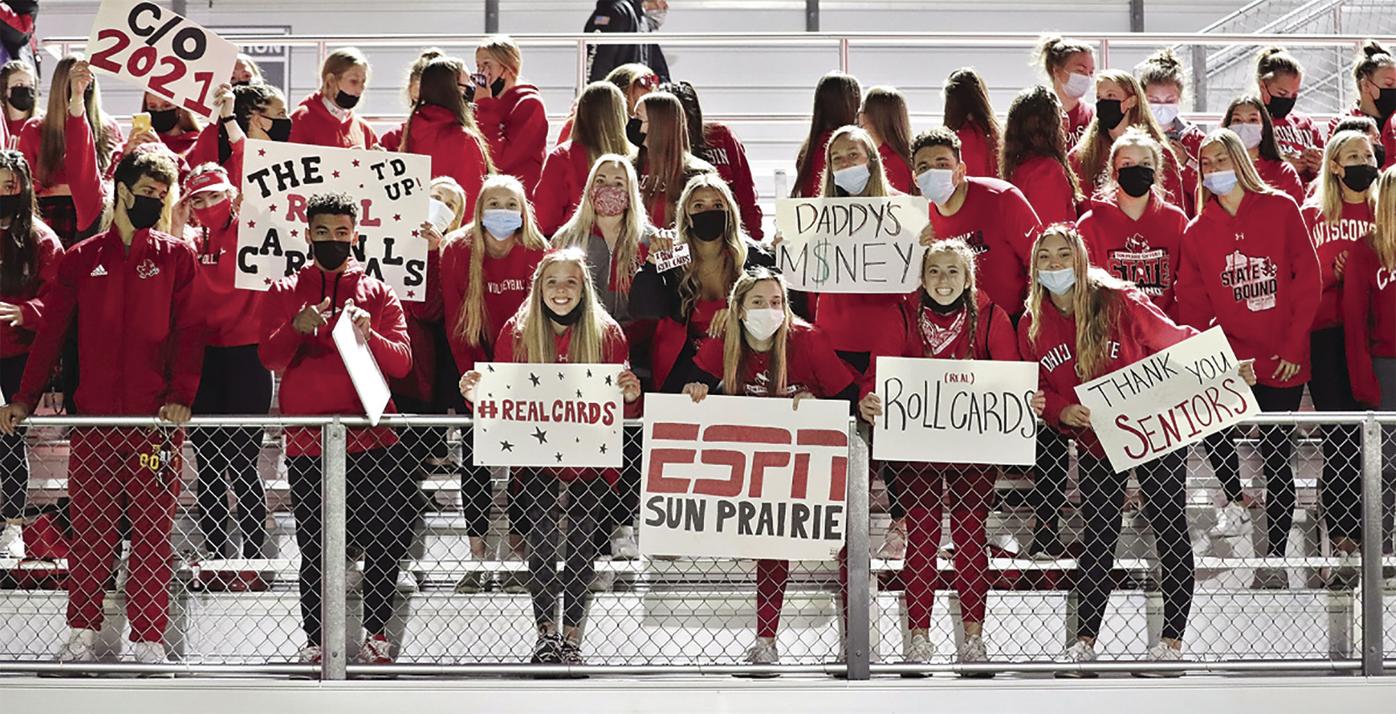 Sun Prairie High School Cardinals fans and students cheered on their team early on inside Bank of Sun Prairie Stadium at Ashley Field on Friday, April 30 during the final game of the season against Middleton. 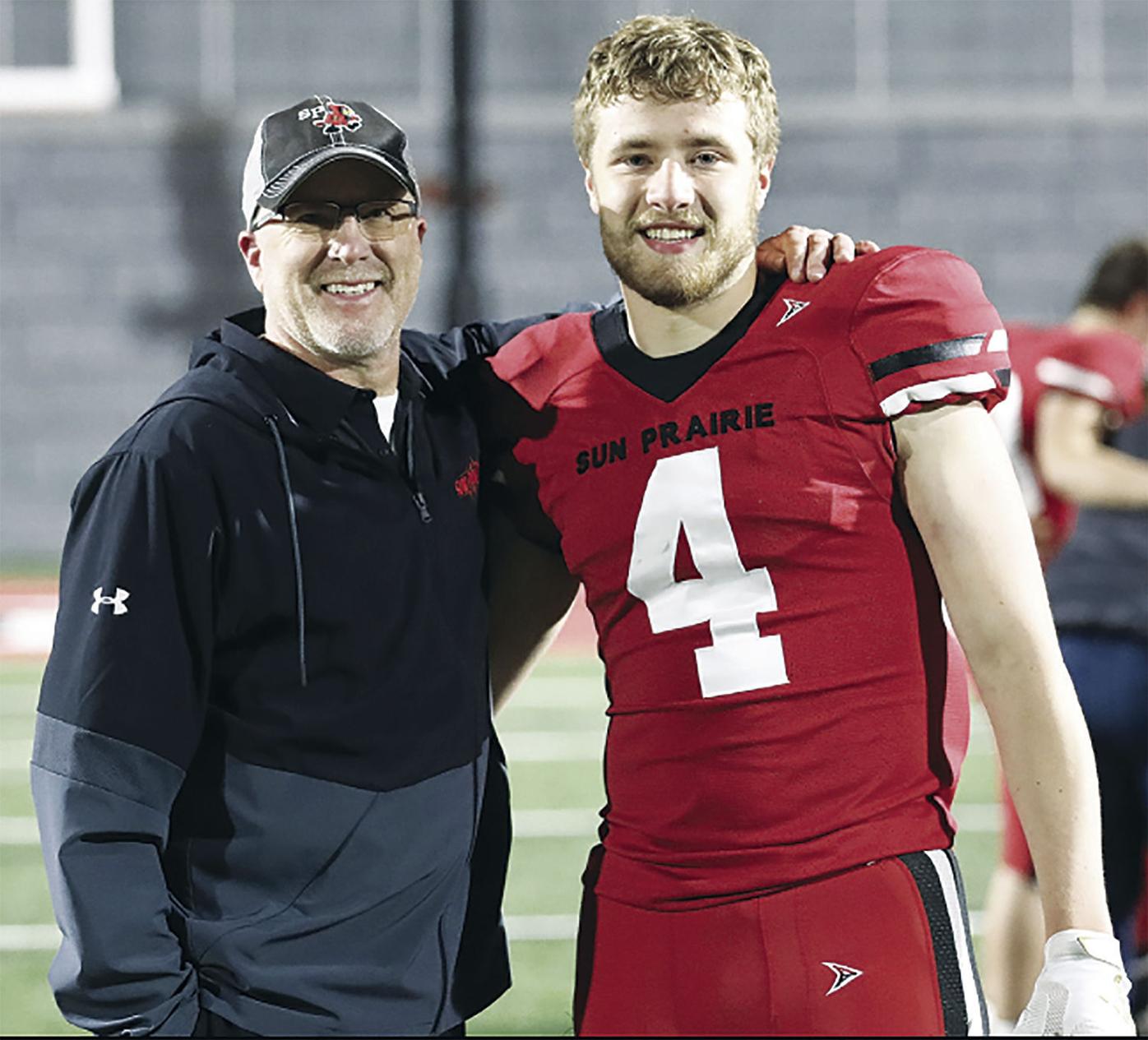 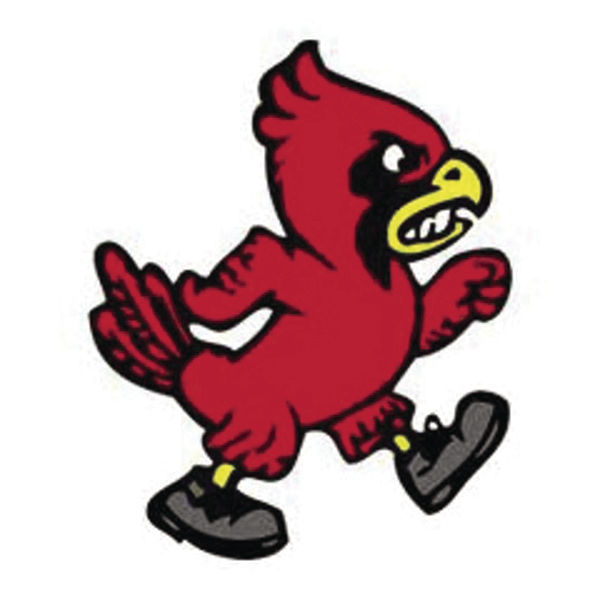 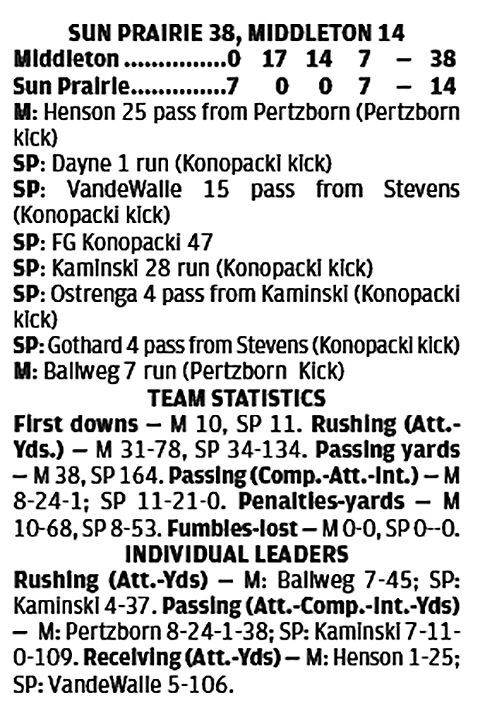 Jay Dayne (#25) scored during the first half of the Sun Prairie-Middleton football game that took place in Bank of Sun Prairie Stadium at Ashley Field on Friday, April 30. Sun Prairie won the game, 38-14, to finish the COVID-19 pandemic-delayed spring season with a 6-0 record.

Sun Prairie High School Cardinals fans and students cheered on their team early on inside Bank of Sun Prairie Stadium at Ashley Field on Friday, April 30 during the final game of the season against Middleton.

The Sun Prairie Cardinals recovered from a Brady Stevens fumble on the first play from scrimmage and an immediate Middleton touchdown to dominate the Middleton Cardinals, 38-14, on Friday April 30th during Sun Prairie’s final spring football game at Bank of Sun Prairie Stadium at Ashley Field.

Stevens fumbled on the Sun Prairie 30 and two plays later, Middleton quarterback Sawyer Pertzborn whipped a 25-yard pass to Bryce Hensen, who tight-roped the sidelines and into the end zone for a 6-0 lead with 11 minutes left in the first quarter.

Two Sun Prairie drives later, following an unsportsmanlike conduct penalty in which a Middleton and a Sun Prairie player were ejected, Stevens threw into double coverage and hit Addison Ostrenga at the Middleton 17. But that play was called back for Sun Prairie pass interference. The drive stalled, forcing an Owen Konopacki punt that was downed at the Middleton 31.

A series of Elijah Gray runs took Middleton to the Sun Prairie 48, but that drive also stalled after a 24-yard Sun Prairie defensive tackle for loss.

Middleton never seemed to find its way offensively again until late in the fourth quarter, when Tanner Ballweg scampered into the end zone with 1:57 left in the game.

In between, Sun Prairie scored 38 points, including a one-yard run by Jay Dayne. Sun Prairie’s second score resulted from a Davis Hamilton interception at the Middleton 20, and Stevens found Jonathan Vandewalle on the next play to make it 13-7 Sun Prairie. Konopacki’s extra point made it 14-7.

Another stalled Middleton drive resulted in a Konpacki 47-yard field goal to make it 17-7 with 26 seconds remaining in the half.

Middleton’s first possession of the second half ended after four plays and a punt tapped dead at the Middleton 43. Four plays later, Sun Prairie quarterback Jerry Kaminski sprinted into the end zone. A Konopacki extra point made it 24-7 with 8:36 left in the third quarter.

Undeterred, Sun Prairie followed a Markale Curry running play with a 14-yard pass from Kaminski to Vandewalle and a 4-yard scoring strike to Ostrenga. After the Konopacki extra point, Sun Prairie took a 31-7 lead with 1:12 left in the third quarter.

Middleton’s next drive stalled thanks to a Hellenbrand tackle for a one-yard loss, an incomplete pass, an intentional grounding penalty and a Middleton illegal procedure penalty. On 4th and 26, Isaac Hamm tipped a Middleton punt that only traveled to the Middleton 20.

But a 4th and 1 run by Ben Stoner for no gain gave the ball back to Middleton at their own 11-yard line at the beginning of the fourth quarter.

Four plays later, Sun Prairie’s Kamron Gothard returned a punt from the Middleton 45 to the 14, setting up a Curry 10-yard run. A Dayne one-yard loss and an incompletion from Stevens to Gothard made it 4th and goal. But Stevens found Gothard again, this time in the end zone, for a 4-yard touchdown pass. The Konopacki extra point put the Cardinals up 38-7 with 7:07 remaining in the fourth quarter.

While both teams were nearly equal on first downs (Sun Prairie had just one more at 11 than Middleton’s 10), the game also included many penalties and finished well after 9 p.m. Middleton tallied 10 penalties for 68 yards, while Sun Prairie compiled eight penalties for 53 yards.

Vandewalle was the top receiver in the game with 106 yards on five catches, while Middleton’s top receiver, Hansen, finished with just 25 yards on one reception.

The game was a milestone of sorts, with media being able to access the press box including the Sun Prairie Media Center broadcast team of Bill Baker, Jamison Rabbitt and Mike Powers, who completed their first game inside the new Bank of Sun Prairie Stadium at Ashley Field press box and frequently commented on the spacious quarters during their telecast (see ksun.tv and check out the programming available on demand to view the telecast).

Unfortunately, some vocal fans could also be heard during the telecast using profanity during the game after two controversial, offsetting unsportsmanlike conduct penalties were called against Sun Prairie and Middleton.

With the win, Sun Prairie finishes the rescheduled fall-to-spring football season at 6-0 atop a Big Eight Conference that didn’t include any of the Madison high schools in competition.