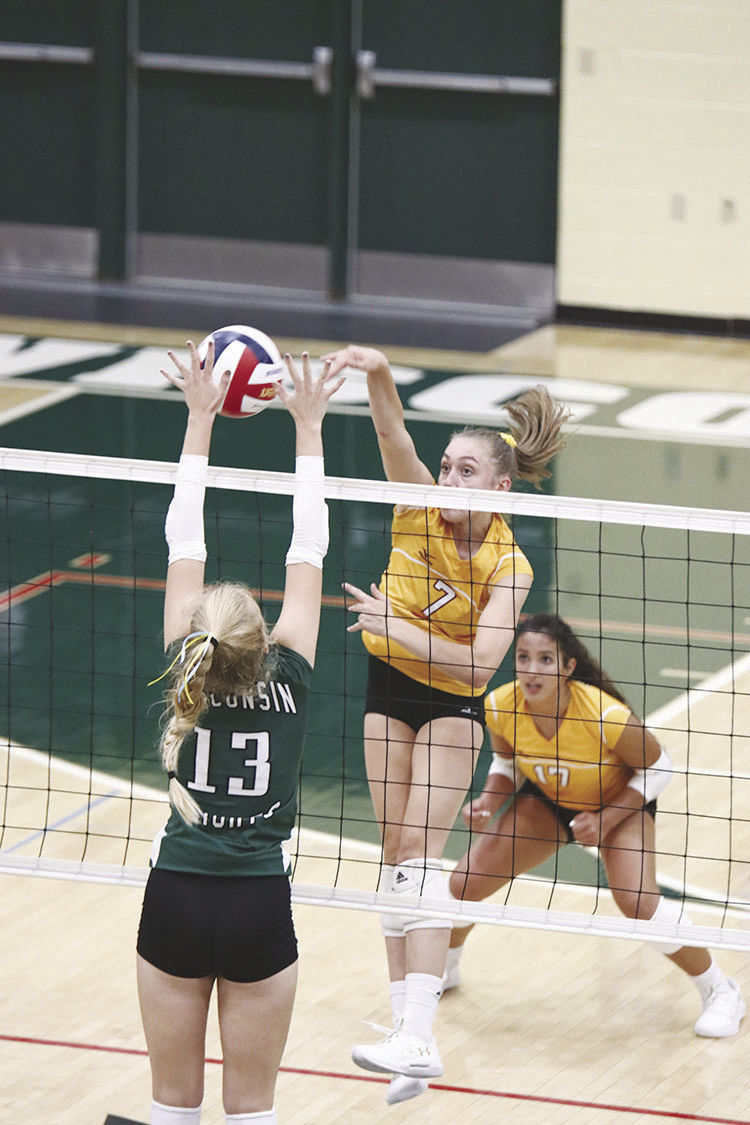 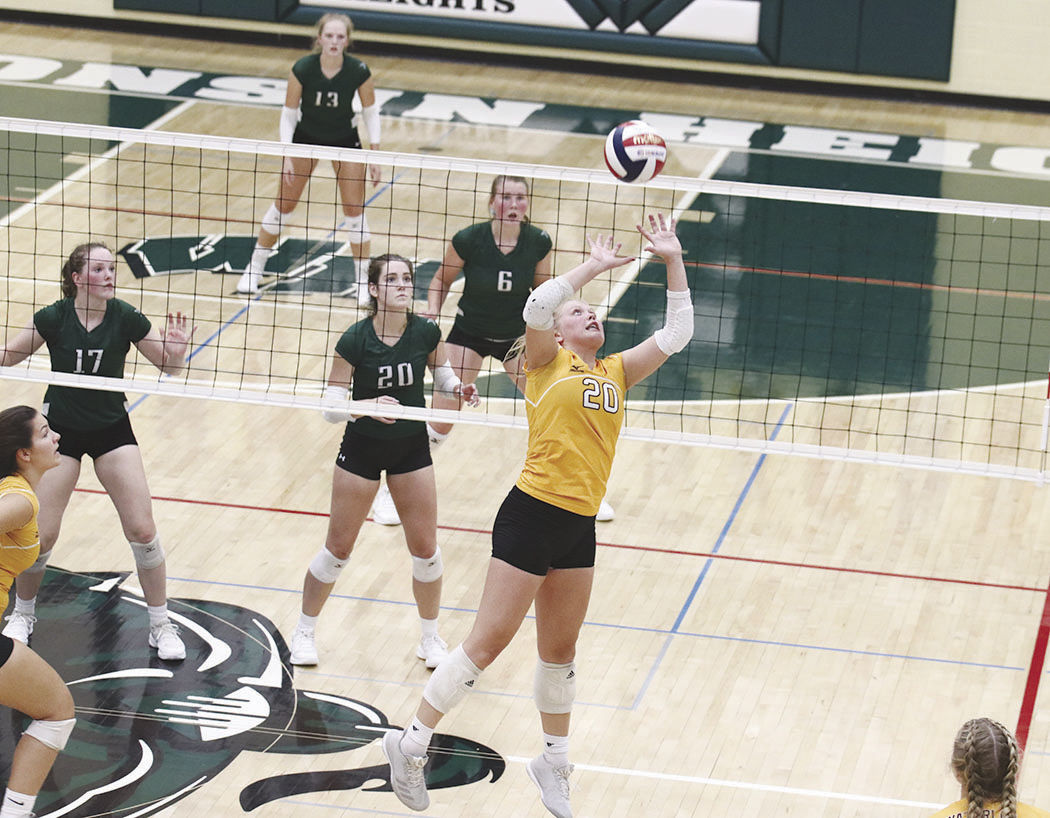 Joslyn Wolff had team-highs in blocks assists (20) and blocks (3) while adding 14 digs and six kills in top-ranked Waterloo’s 3-0 Capitol South win over No. 5 Wisconsin Heights on Sept. 5.

Joslyn Wolff had team-highs in blocks assists (20) and blocks (3) while adding 14 digs and six kills in top-ranked Waterloo’s 3-0 Capitol South win over No. 5 Wisconsin Heights on Sept. 5.

Waterloo, ranked No. 1 in Division 3 by the Wisconsin Volleyball Coaches Association, beat Belleville 3-1 on Sept. 3 before blanking No. 5 Wisconsin Heights on Sept. 5.

Waterloo lost the opening set 25-22 to Belleville before reeling off three consecutive set victories to beat the visiting Wildcats in a Capitol South Conference volleyball match on Sept. 3.

“Belleville has had some success early in its season and came in with a lot of confidence and tenacity,” Waterloo volleyball coach Christy Mosher said. “They did a nice job of distributing the ball and kept us out of system with tough serving in the first set. We quickly found ourselves down a set in our home opener.”

Brooke Mosher led the team in kills with 24 and blocks with three.

“We settled down in the second, and rode a nice run at the serving line by Kamden Fitzgerald to get some separation,” coach Mosher said. “Brooke Mosher and Joslyn Wolff got going at the pins and despite a couple blocks by their 6-foot-1 middle Brooke Everson, we were bringing the heat offensively.

Wolff was second on the squad with 14 kills and also registered 18 assists, a team best.

In a showdown of two of the state’s top Division 3 teams, Waterloo showed who belongs at the top of the state rankings following a 25-20, 25-21, 25-14 win over the Vanguards in Mazomanie.

“We have developed quite a rivalry with Wisconsin Heights and seeing them get off to a 6-0 start this season, along with being ranked fifth in the state, we knew we would be in for a battle,” coach Mosher said. “Their crowd was loud and it took us several points to settle down.”

After falling behind early, the Pirates (10-1 overall, 3-0 Capitol South) rode the strong serving of Fitzgerald to take its first lead at 13-12, and did not give it back.

“Brooke Mosher got rolling in the second set and (Heights) had a hard time containing her. Riege was all over the court putting up some great digs on their best hitter to take the wind out of their sails.

“Rylee Duessler, Sophia Schneider and Joslyn Wolff had key kills and Wolff had several hustle plays of her own to help us withstand a late run,” added coach Mosher.

Wolff started the Pirates off strong from the service line in the third set, and Mosher continued to put down kills made possible from a solid serve receive. Abbie Gier and Skyler Powers added a kill each down the stretch as Waterloo was able to race out to a 10-point lead and maintained it until the end.

“This was the most complete team win we have had. Riege, in particular, had a really nice match and I was impressed with her tenacity and leadership at the libero position,” the coach said.

Riege finished the night with 28 digsand four aces to lead the Pirates in both categories. Mosher smashed down a match-high 21 kills and added two blocks, while Wolff had team-highs in blocks (3) and assists (20) while adding six kills.

The Pirates will play in the Brookfield Central Invitational on Saturday, beginning at 8:30 a.m.

They return to Capitol South play Tuesday hosting Marshall in a 6:45 p.m. start.

“We have developed quite a rivalry with Wisconsin Heights and seeing them get off to a 6-0 start this season, along with being ranked fifth in the state, we knew we would be in for a battle. Their crowd was loud and it took us several points to settle down."