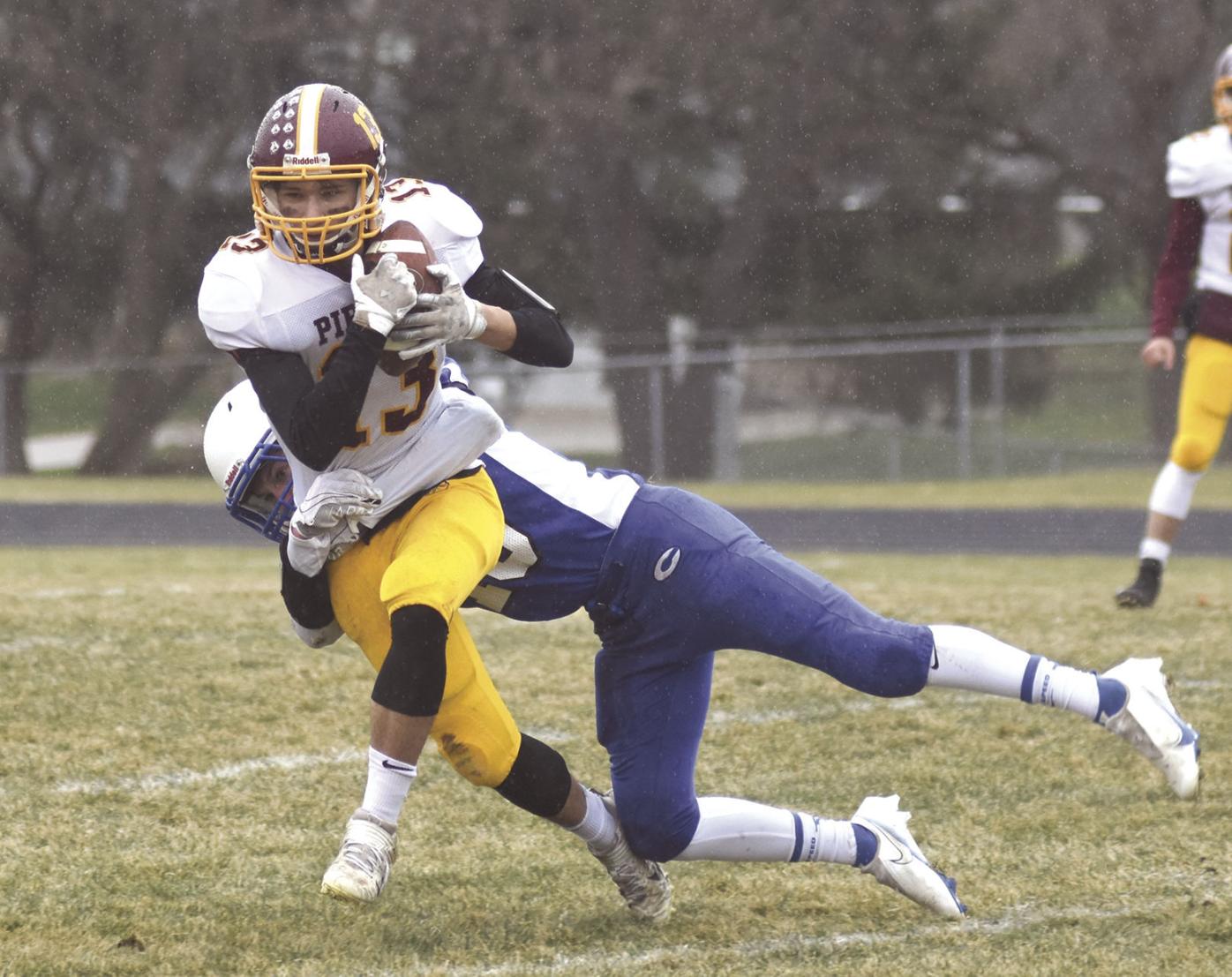 Waterloo senior receiver Brody Tschanz is brought down by Cambridge defensive back Sully Schlieckau after a short gain during a WIAA Division 5 playoff game in Cambridge on Nov. 14. Cambridge won 29-6. 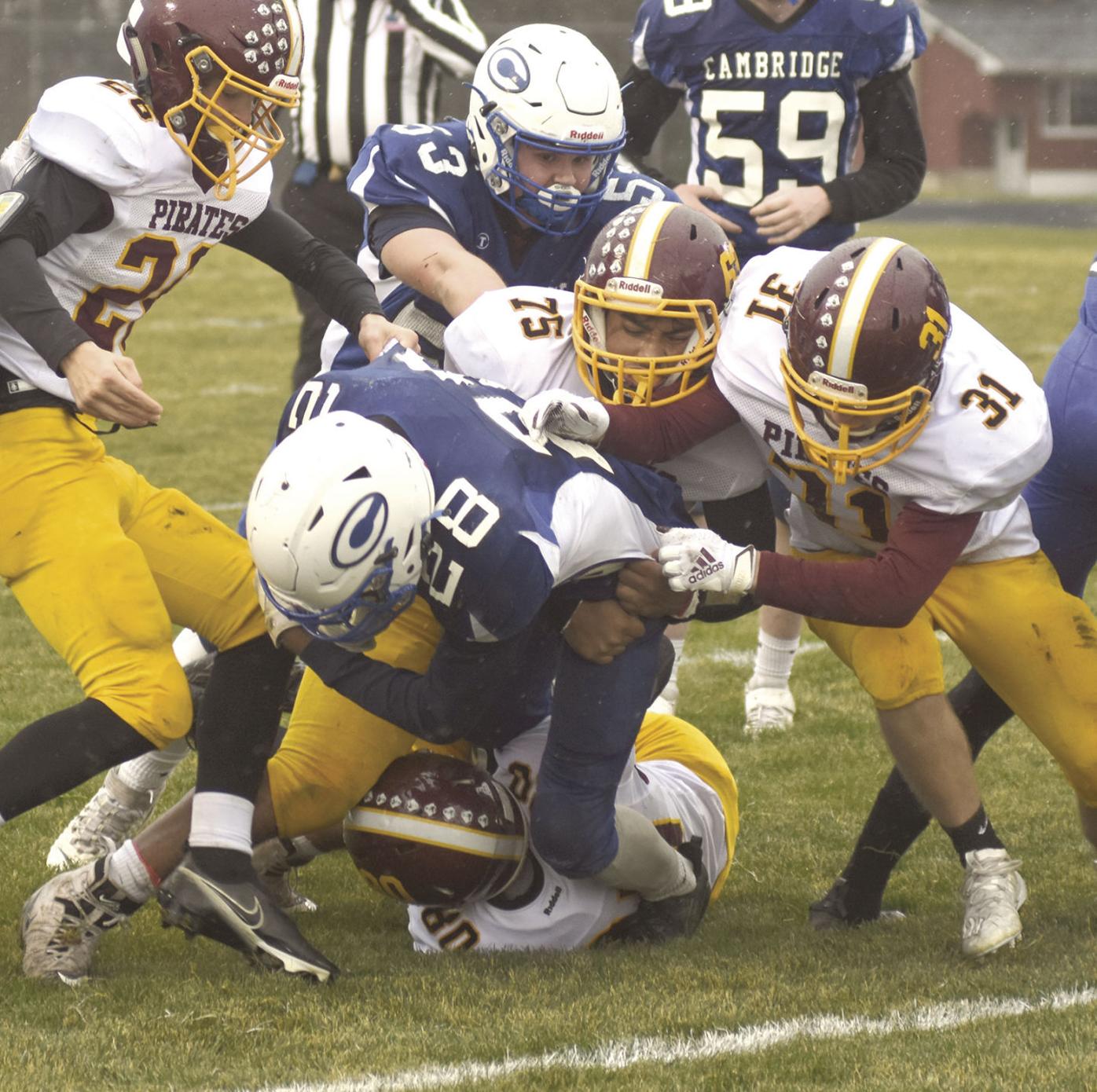 Waterloo senior receiver Brody Tschanz is brought down by Cambridge defensive back Sully Schlieckau after a short gain during a WIAA Division 5 playoff game in Cambridge on Nov. 14. Cambridge won 29-6.

It had been four long years since Waterloo participated in the postseason, so regardless of the outcome of Saturday’s WIAA Division 5 first-round playoff game the 2020 season, abbreviated as it was by COVID-19, was still a special one for the program.

For the second time in three weeks the Pirates squared off with Cambridge, and just like the first game the host Blue Jays prevailed, 29-6, in the Level 1 game.

“It was a great experience for all of our kids to be able to play in a playoff game,” said Pirates second-year head coach Dave Frisell, whose team lost to the Blue Jays 43-13 on Oct. 30. “We were pretty dinged up and it forced us to play a lot of younger guys who had an opportunity to see what varsity football is all about and it will prepare them for the off-season to work on getting to that level. It was also a great pay off for the older guys who stuck with football through some tough times to get a chance to see some reward for their commitment.”

After winning three of its first four games (and being awarded a forfeit victory over Dodgeland), the third-seeded Pirates lost their final three contests to finish the year 4-4 overall.

The game between the Eastern Suburban Conference rivals was a defensive battle for the first 24 minutes, with the second-seeded Blue Jays holding a 7-0 halftime advantage; quarterback Ezra Stein’s 6-yard run and extra point was all the scoring in the first half.

“Our defense played fantastic,” said Frisell. “We were short handed and played with some young guys on the field and they responded to the challenge. Our defensive coaches did a good job of preparing them for what Cambridge likes to do and the kids executed what they were asked to do. We had to rely on them to hold us in because we lost Blake Huebner, our QB, on the second series of the game and we knew we would have to try to win a lower scoring game. I was very proud of our defense.”

Stein continued to be a thorn in the Pirates’ side as he called his number twice more in the third quarter, scoring on a pair of 2-yard runs to up the Blue Jay lead to 22-0.

Waterloo finally broke into the scoring column in the fourth quarter when Eugene Wolff burst across the goal line from 6 yards out — his eighth TD of the season — cutting the Cambridge lead to 22-6.

However, Cambridge (5-2) put the game away on the very next drive as junior Trey Colts scored from 2 yards out.

“Stein and Colts are two very good athletes who form a nice duo. It was nice to have the experience of playing against them once before and know what they do well. I thought our kids did a fantastic job of learning from the previous game and being students of the game to know some tendencies,“ said Friesell.

“If we would have played a full schedule and had just one playoff game, I don’t think 1,500 yards would have been out of reach for Eugene. He seemed to get stronger the more he carried the ball and I think his numbers would have been in that neighborhood. The future is bright for Eugene because he will continue to work hard to better himself and we have a majority of our line coming back next year so that should be a good combination,” said Frisell.

Colts finished with 144 yards on 19 carries to lead the Blue Jay attack.

“We can build on what we did this year,” Frisell said. “We took a big jump from playing in mostly non-competitive games to really having a realistic chance to win every game we played this year. It is hard to learn how to win and we started to learn that this year. Now the challenge is, can we do it again next year and win a few more of those competitive games. That will get us an opportunity to host a playoff game or two. We have the nucleus returning to take that next step. Now we need to try to build some depth in the program by getting a few more kids out.”

Cambridge advanced to play top-seeded Mineral Point in the playoff championship game, however, the Pointers will not play the season finale.