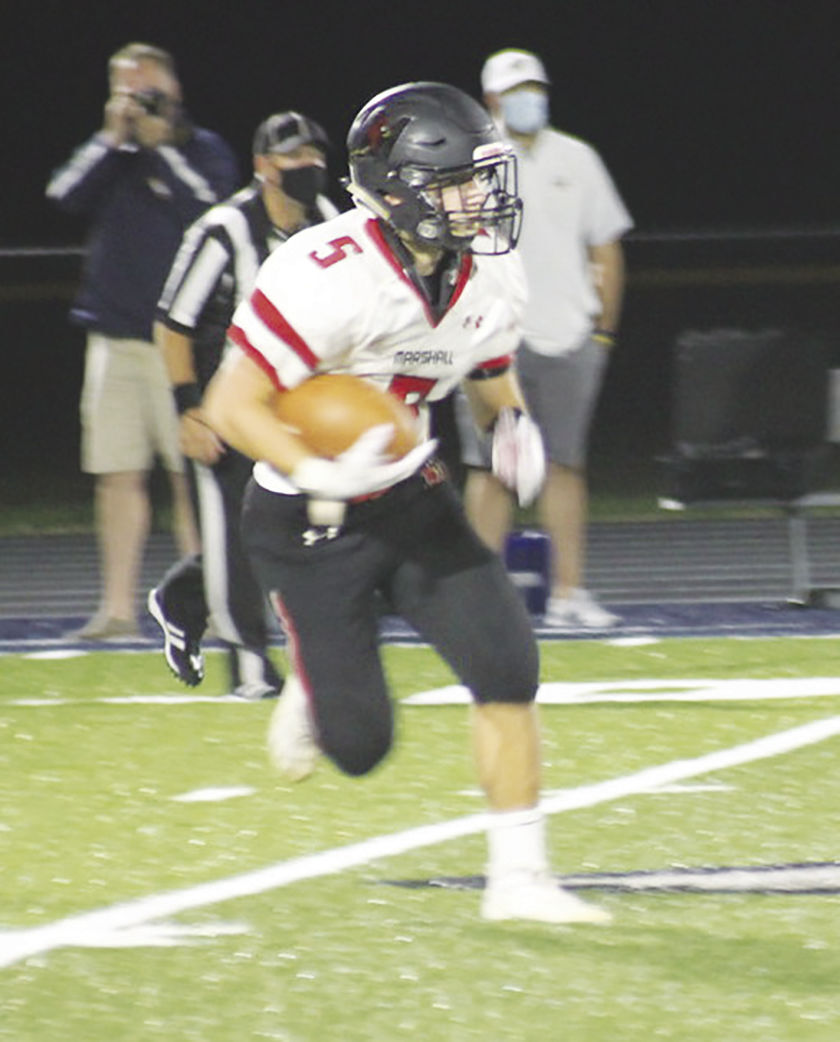 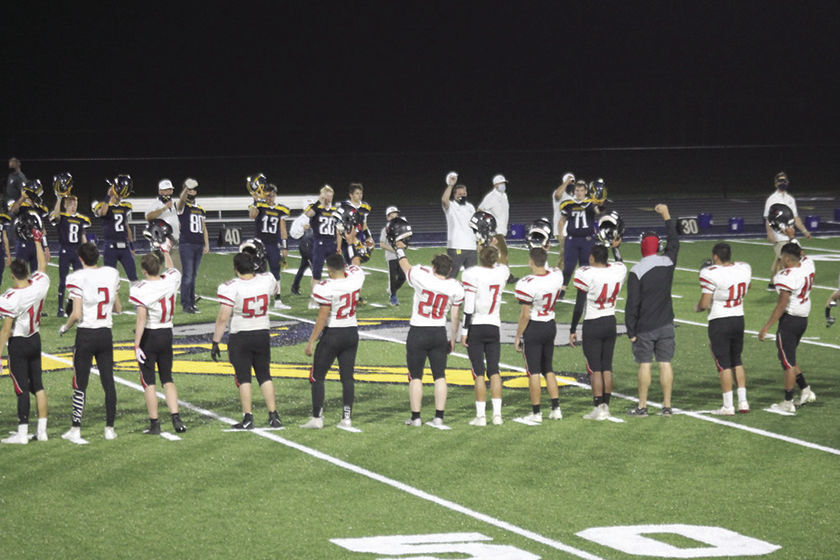 Marshall and Tomahawk gave each other a salute instead of doing the post-game handshake. It’s part of both team’s effort of social distancing when possible during the COVID-19 pandemic.

Marshall and Tomahawk gave each other a salute instead of doing the post-game handshake. It’s part of both team’s effort of social distancing when possible during the COVID-19 pandemic.

TOMAHAWK — There may not be anybody happier that high school football is back than Bryce Frank.

The Marshall junior scored three touchdowns — all in different fashion — to lead the Cardinals to a 39-8 non-conference victory over Tomahawk in the 2020 season opener Sept. 25.

“He was not only involved in the offense, but he was our second-leading tackler and he kicked two touchbacks and handled our extra-point duties,” said Marshall head coach Matt Kleinheinz.

Frank scored on a punt return, a long run, and even caught a TD pass from Craig Ward.

“I think it was one of the more well-rounded performances that we’ve had here in quite some time,” added Kleinheinz.

The Cardinals (1-0) scored on the game’s opening series as Ward connected with Canon Siedschlag on a 19-yard pass for a quick 6-0 lead.

Freshman Matthew Motl cashed in on Marshall’s second possession with a 4-yard run that upped the lead to 12-0 with 3 minutes, 22 seconds remaining in the opening quarter.

Then Frank went to work.

He returned a punt 64 yards for Marshall’s third score, then ripped off a 91-yard run to daylight. Frank finished his personal outburst catching a 35-yard scoring aerial from Ward.

“Last year Bryce had some ups and downs, which is to be expected as a sophomore. For him to come out in his first game of his junior year and do what he did was very impressive,” said Kleinheinz.

Frank was the game’s leading rusher with 149 yards on seven carries.

Motl scored his second-career TD on a 1-yard run with 3:39 left in the third quarter. Motl had 23 yards on five carries in his high school debut.

It was the latest season-opening start in Wisconsin high school football history due to the COVID-19. Marshall and Tomahawk were two of 257 — out of 377 — football teams in Wisconsin that played opening weekend.

“It made Friday night seem normal again,” said Kleinheinz. “At times I caught myself just watching the kids celebrate after plays. It was pretty awesome.”

The Cardinals will travel to Cambridge Oct. 2 to face the Blue Jays. The ESC kickoff is set for 7 p.m.