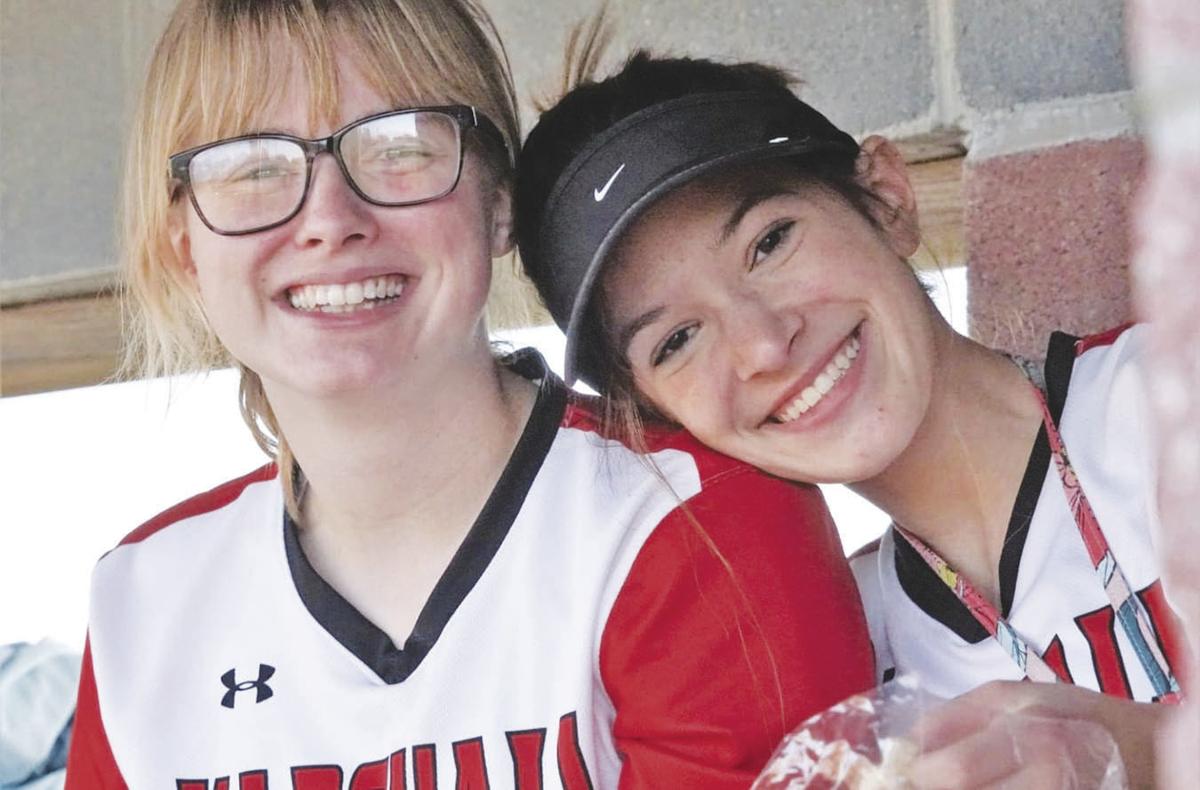 Marshall’s Hailey Erdmann, left, and Aubrie Kappes, right, have been friends since kindergarten and softball teammates for over a decade. 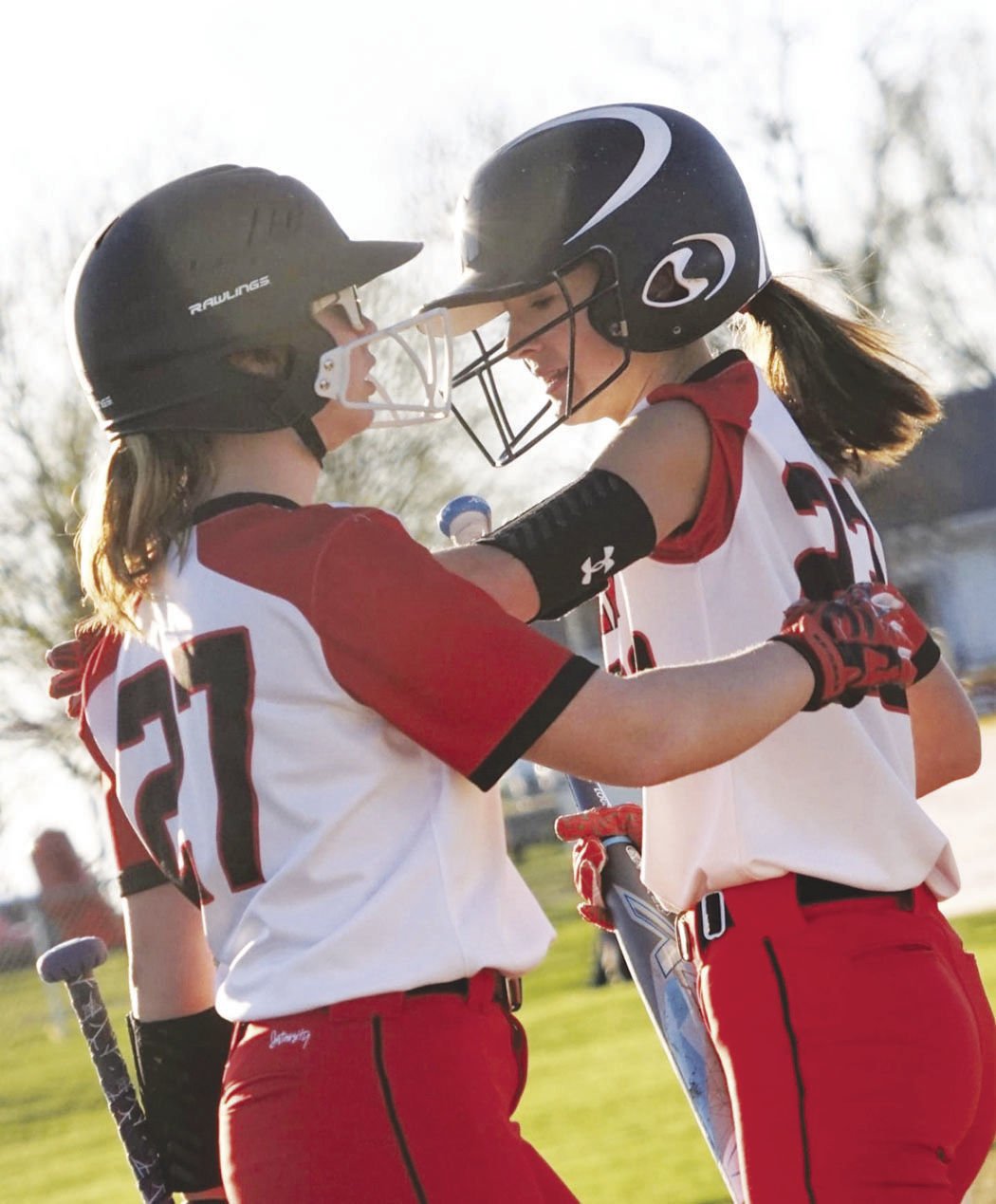 Marshall’s Hailey Erdmann, left, and Aubrie Kappes, right, have been friends since kindergarten and softball teammates for over a decade.

The nickname shared between Hailey Erdmann and Aubrie Kappes is just one of the many things the Marshall High School seniors have had in common nearly their entire lives.

Through grade school, middle school and high school the two have done nearly everything together, both in the classroom and on the athletic field. That’s why it’s only fitting that the Cardinal seniors both were named to the 2020 Wisconsin Fastpitch Softball Coaches Association All-Star Team.

“The bond between us can’t be broken,” said Kappes.

“We have made so many great memories together through youth softball, travel softball, high school softball and school; she truly is one of the greatest friends I have ever had,” Erdmann stated.

The pair was hoping to add one more season of memories to their already extensive laundry list, but the coronavirus pandemic wiped out their senior season.

Both were named All-Capitol South Conference as juniors. Erdmann struck out 91 batters in 83 innings pitched while sporting a 4.47 earned run average after succeeding Capitol South Pitcher of the Year Taylor Pache. She also batted .333.

Meanwhile, Kappes, who moved from center field to play catcher following the graduation of Capitol South Player of the Year Samira Arvin, hit at a .291 clip with a team-leading four doubles.

Kappes was prepared to return to center field, where she earned first-team Capitol South accolades as a sophomore.

“I am beyond disappointed, Kappes said after learning on April 21 that her senior season was officially cancelled by the WIAA because of COVID-19. “I am so extremely grateful that I got this award (but) it is just devastating that I have waited for all high school and can’t be on that field with my other seniors again; I understand all the reasons behind cancelling, but living through three seasons of softball and knowing this would be your best season is so sad.

“I was ready to wear the Marshall uniform one last time.”

“When I first heard about schools beginning to close my first big worry was that us seniors wouldn’t get the chance to finish off our high school softball careers,” said Erdmann, a second-team selection as well in 2018. “Of course I am extremely upset and sad to miss my senior season and will miss the program, my team, coaches, and fans immensely.”

Erdmann and Kappes first met in kindergarten, and the duo have been inseparable ever since. They have played the sport of softball together for over a decade.

“She is an extremely positive and supportive teammate who always lifts up the spirits of everyone else around her,” Erdmann said of Kappes. “She really can play any position and I had a blast pitching to her as she caught for me all of last year. I will also miss all of the high fives, hugs, smiles, and laughs that we have shared before, during, and after games.”

“There’s like a core group of eight to 10 senior girls that are super tight with each other, and those two are a prime example,” said Marshall head coach Erin Young. “Hailey and Aubrie both started playing varsity softball as freshmen so collectively, at least through our softball program, they have learned the ropes with each other.”

So where does “PB” come from?

“When we were younger, around sixth grade, we started a nickname between us,” said Kappes, who went on to explain. “She was my PB (pitching buddy). I caught for Hailey, and since I pitched sometimes, we made up the name since we pitched together. We had to think the name through though because PP (pitching partner) sounded a little weird shouting. Whenever Hailey would get upset on the mound, I would scream at the top of my lungs, ‘It’s ok! You got this PB.’”

Erdmann added: “I will for sure miss her calling me her ‘PB.’”

While the duo has chosen different paths in college, they will be furthering their education in the same city — La Crosse — and will be just five minutes away from one another. Erdmann will be going to Viterbo University majoring in nursing, while Kappes will be just over a mile away at UW-La Crosse majoring in nuclear medicine technology.

Kappes has hopes of playing softball for the UW-L Eagles, while Erdmann will hang up her glove as she focuses on her education.

“I know that she is hoping to play softball for UW-La Crosse,” said Erdmann of Kappes. “I would love to be able to continue watching her grow and play her heart out there as she always does.”

Kappes and Erdmann both found out from their mothers that they had been chosen to represent Marshall in the WFSCA All-Star Game, which was originally scheduled for June 17-18 before being cancelled.

“The person who first told me I was nominated was Coach Young; I didn’t know when they would announce it but I was so excited. The person who told me the actual news of being named All-Star was my mom. I came out of my room in the morning and she told me the news. I was extremely excited and so proud that all the hard work I put into all my years was recognized,” said Kappes.

“My mom got a text from a family friend that congratulated me on making the All-Star Team,” said Erdmann. “At this point we had no idea about it and were able to find the Facebook post with the list of the team. I was super shocked and very excited that I got the opportunity to be on the team.”

The pair were selected to the Division 2/3 team. They would have been teammates with fellow Capitol South players Jillian Michaels and Ella Campbell of Belleville, and Ciara Peters of Cambridge.

Kappes and Erdmann are also involved in other co-curricular activities.

Kappes carries a 3.81 GPA while taking laude and AP courses. She has also played volleyball, is a member of the dance team, show choir, musicals, drama, and is vice president of the student council. She has been a reporter on the HOSA officer team, earned both athletic and academic excellence (previously known as National Honor Society), is on the principal advisory board, graduation committee and a student representative for the Marshall School Board.

“I think that strong friendship you see has to do a lot with how they hold each other accountable and how they push each other. That’s really exciting when you have kids like that,” said Young.

The end of the road isn’t quite there yet for Erdmann, Kappes and fellow seniors Paige Buchanan, Haley Horne, Malena King and Allison Powers. All six are eligible and have expressed interest in participating in the Senior Showcase Aug. 3-4.

And maybe one last time you can hear, “You got this, PB!”

“I think that strong friendship you see has to do a lot with how they hold each other accountable and how they push each other. That’s really exciting when you have kids like that."