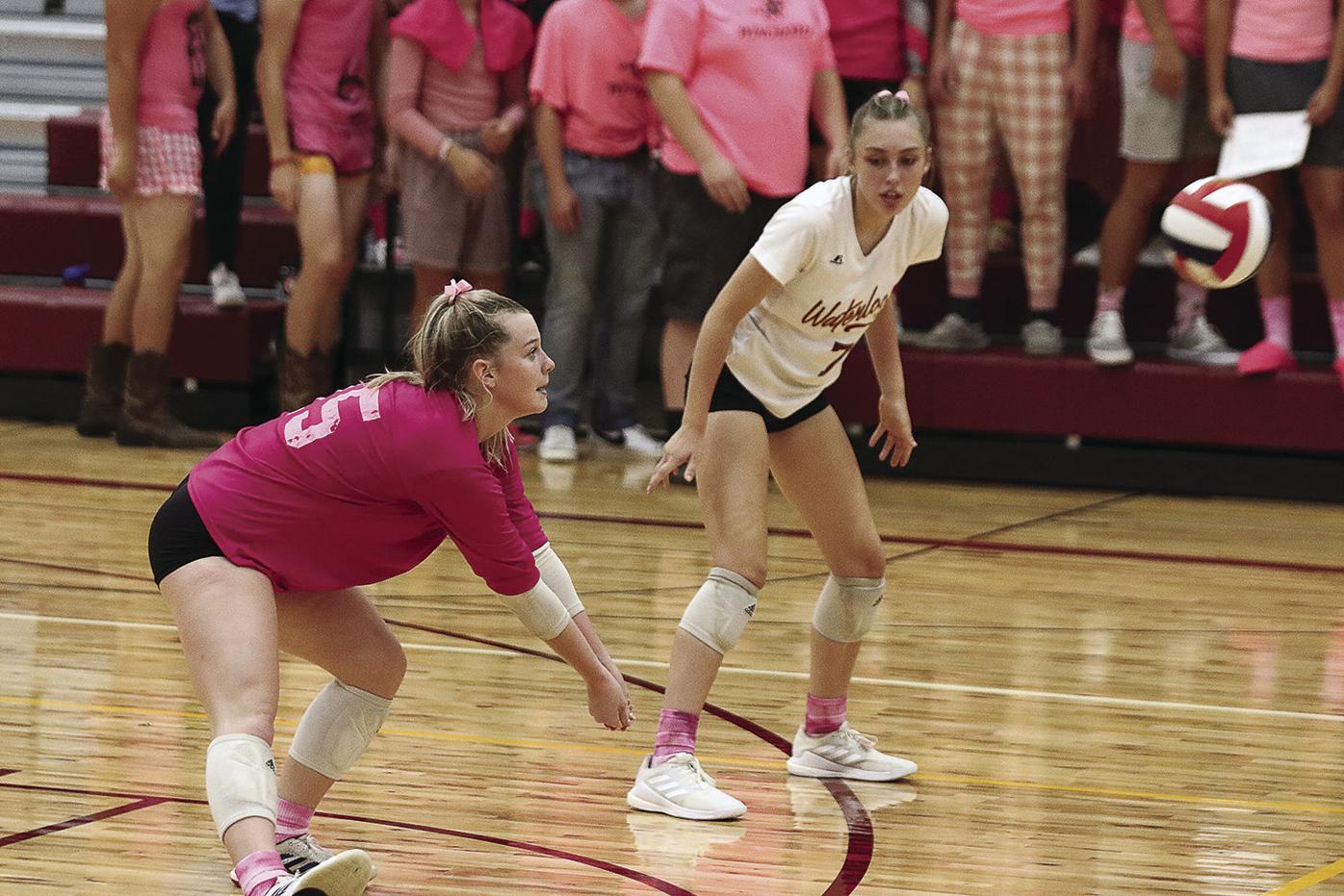 Waterloo senior libero Michaela Riege digs a ball against Cambridge Tuesday, Oct. 5. On this day, she broke the school record for career digs with over 1,370. 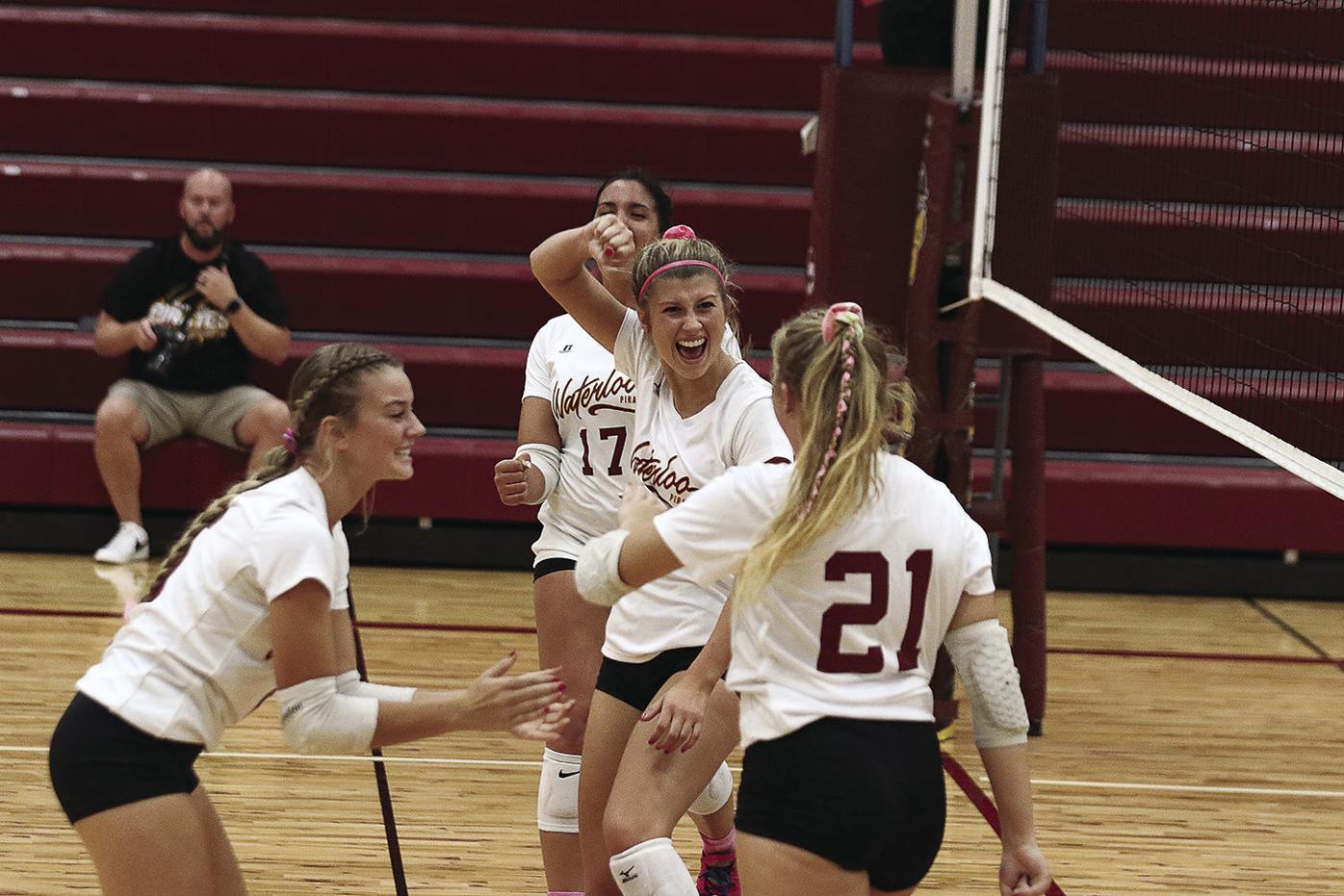 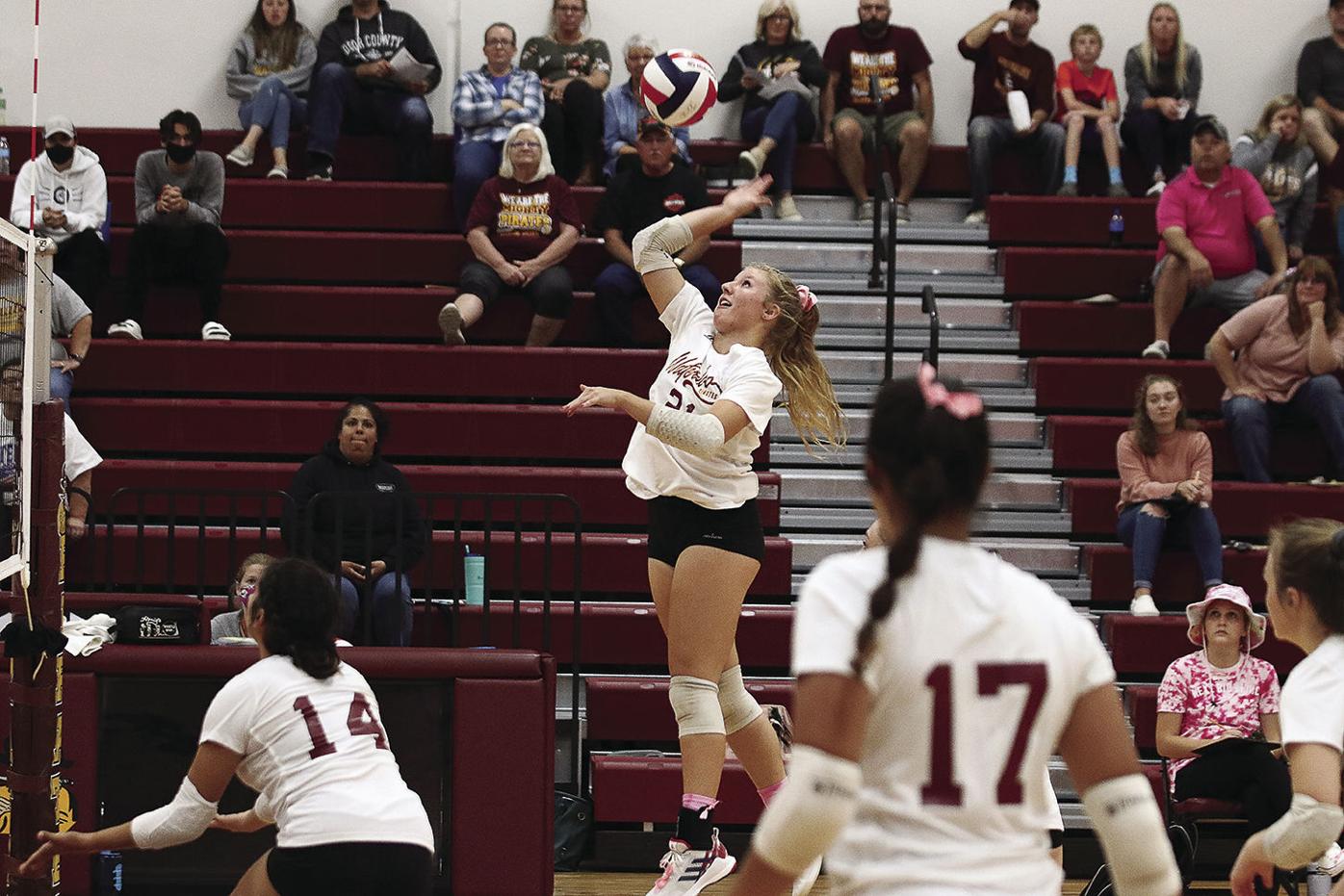 Waterloo senior outside hitter Abbie Gier goes up for a kill against Cambridge Tuesday, Oct. 5.

Waterloo senior libero Michaela Riege digs a ball against Cambridge Tuesday, Oct. 5. On this day, she broke the school record for career digs with over 1,370.

Waterloo senior outside hitter Abbie Gier goes up for a kill against Cambridge Tuesday, Oct. 5.

As the regular season comes to a close, the Waterloo Pirates are in the diver’s seat to win the Captiol-South Conference. Following Tuesday’s victory over Cambridge, the Pirates now have a 7-1 record in conference, a full game lead over 2nd place teams New Glarus and Wisconsin Heights, both at 6-2. An added bonus in Waterloo’s favor is both of New Glarus’ losses came to the Pirates. Waterloo has already taken down Wisconsin Heights once this season as well. The Pirates haven’t gotten ahead of themselves, though.

It would have been easy to take Cambridge, a team that’s winless in conference so far this season, lightly when they welcomed the Bluejays in for a game Tuesday, Oct. 5. It was evident the Pirates are still completely locked in as they beat Cambridge, 3-0.

“Cambridge has taken some sets off of pretty much everyone in the conference,” Waterloo head coach Christy Mosher said of Cambridge. “We knew, despite their record, that they had talent. They have some good athletes. We knew they would put up a fight.”

Waterloo’s offense was firing on all cylinders Tuesday evening. It was rare that points came by way of a Cambridge error or miscommunication. Instead, there was just no stopping the Pirates. The same familiar faces that have led this Waterloo team so far this season showed up early and put the Bluejays away quickly.

From there, Cambridge just couldn’t get back into it. The terrific trio continued to pound kills to the hardwood and the Bluejays didn’t have an answer. The Pirates got in their own way a bit down the stretch, gifting some free points with some errant serves, but kept the pressure on to win the first set 25-17.

The trio did not slow down to start the second set, either. With Cambridge keeping it close early thanks to some nice play near the net, Duessler fired off three kills in a row to turn a 2-3 disadvantage to a 5-3 lead. Duessler handed the baton to Schneider, who answered with four kills on a big Waterloo run as the lead grew to 12-7.

Cambridge was starting to take advantage of some light play from Waterloo, that was until Gier fired off three kills to keep the Pirates afloat. It seemed that whenever the pirates needed a spark, one of those three was always there to answer the call. That bodes well for a deep postseason run.

Down the stretch, Cambridge was beginning to lose its cool. It had done a great job of not giving up free points up until then, but a few freebies down the stretch helped the Pirates ice the win, 25-18.

The Bluejays simply were out of composure by the third set. They had worked very hard to keep pace with the Pirates, but something finally gave. Cambridge couldn’t keep the ball out of the net as Waterloo erupted to a 7-3 lead. Waterloo gifted the Bluejays a couple of free ones as well as recompense, until the run began. Just as the Bluejays cut the deficit to 7-8, the Pirates slammed the door. With senior libero Michaela Riege in service, the Pirates scored seven unanswered points, highlighted by two aces from Riege.

Mental struggles continued for the Bluejays down the stretch. Every long rally ended in a Waterloo score as the net was a bigger opponent than the Pirates. There was no coming back as Waterloo closed out a 25-14 set win to claim the match, 3-0.

In this game, Riege broke the Waterloo school record for career digs with over 1,370.

The win was impressive, but the Pirates still have some regular season business to take care of before the postseason. Next up for the Pirates is a trip to Belleville Tuesday, Oct. 12. The Wildcats gave the Pirates their only conference loss earlier this season, so Waterloo will have its eyes on revenge.

The final conference game of the season will come two days later as Waterloo will host Wisconsin Heights Thursday, Oct. 14.