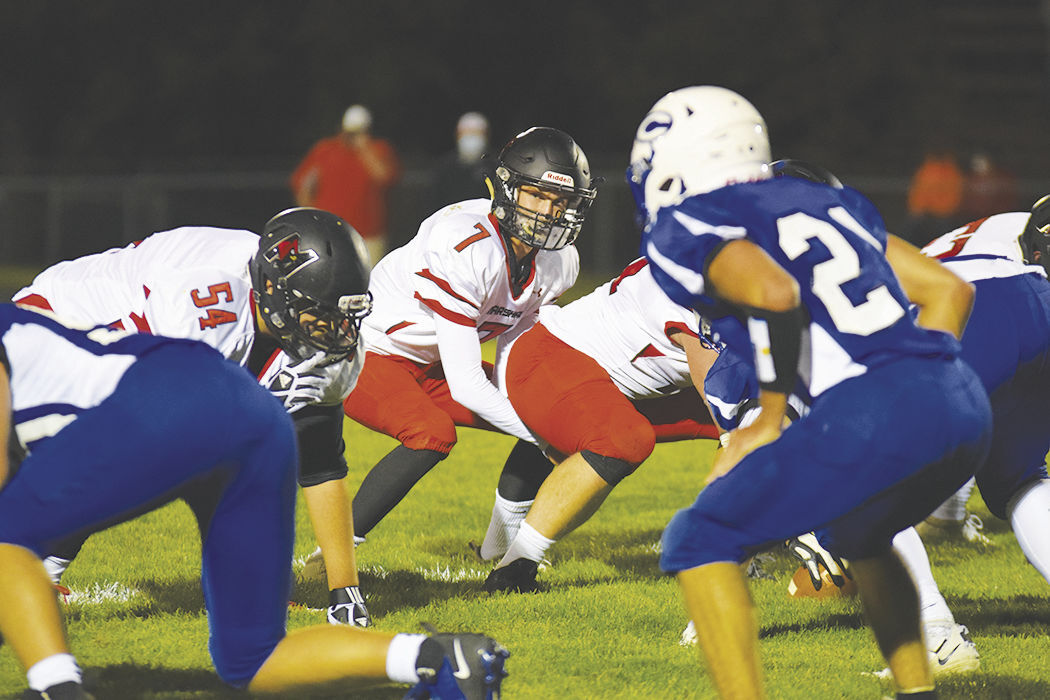 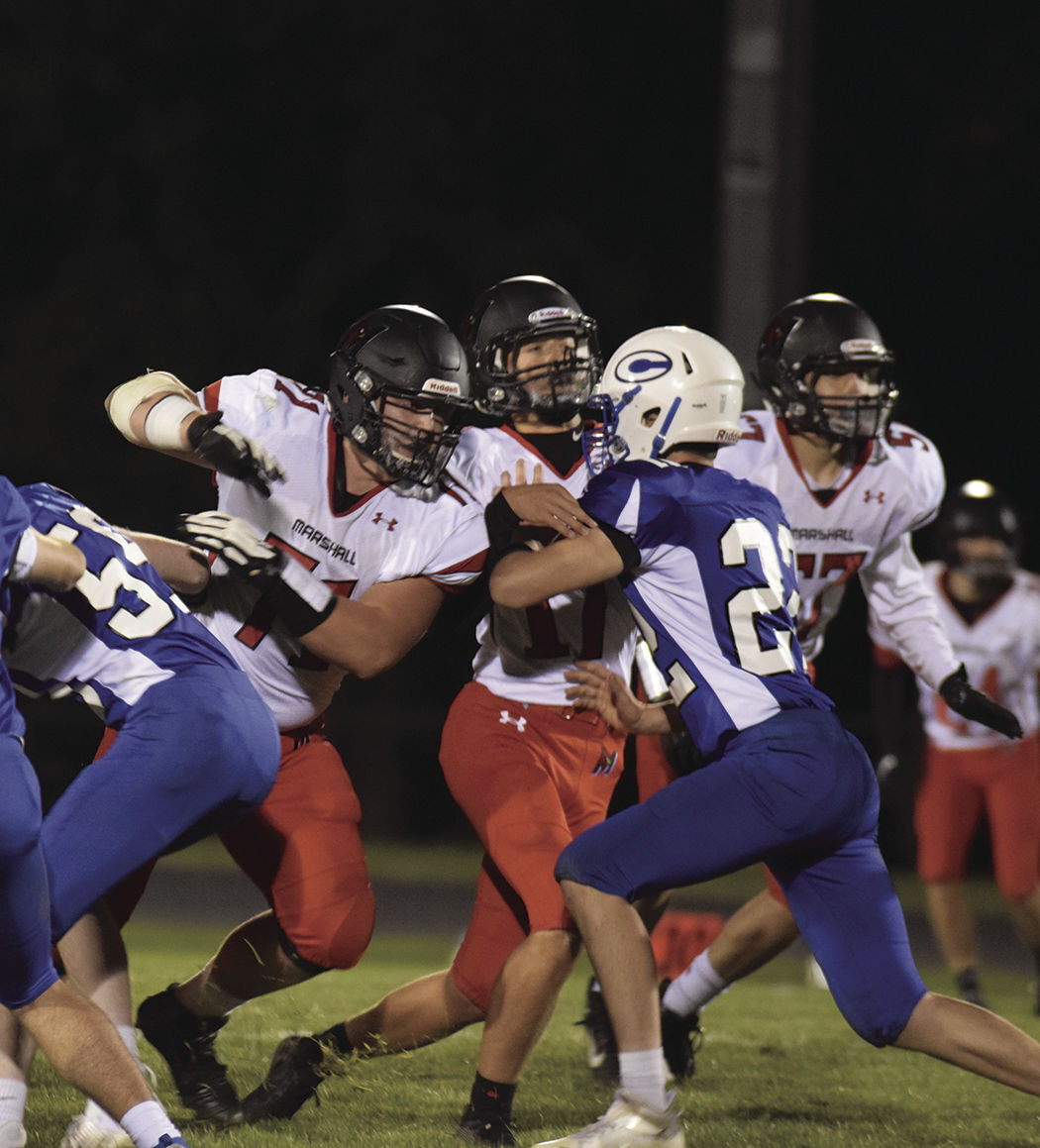 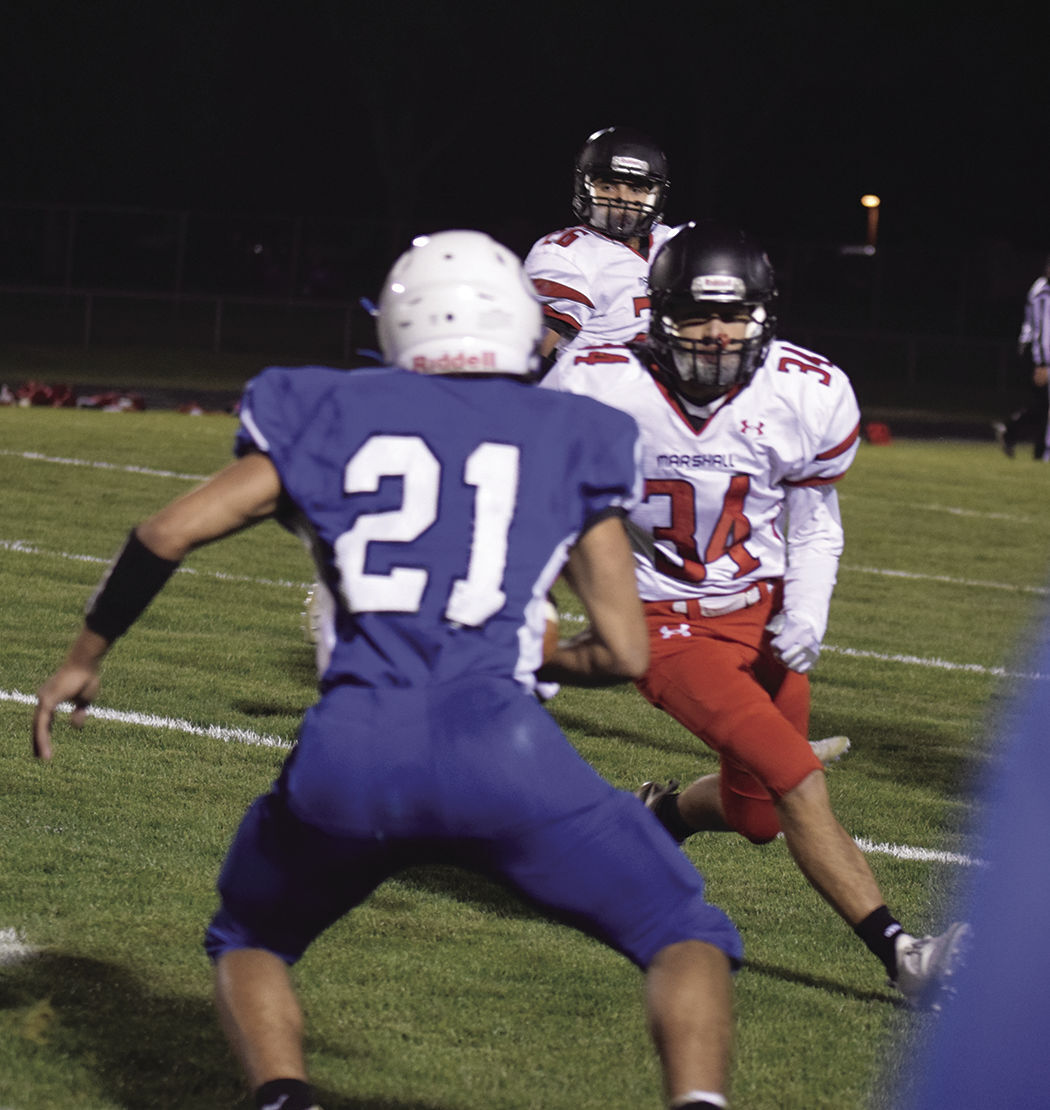 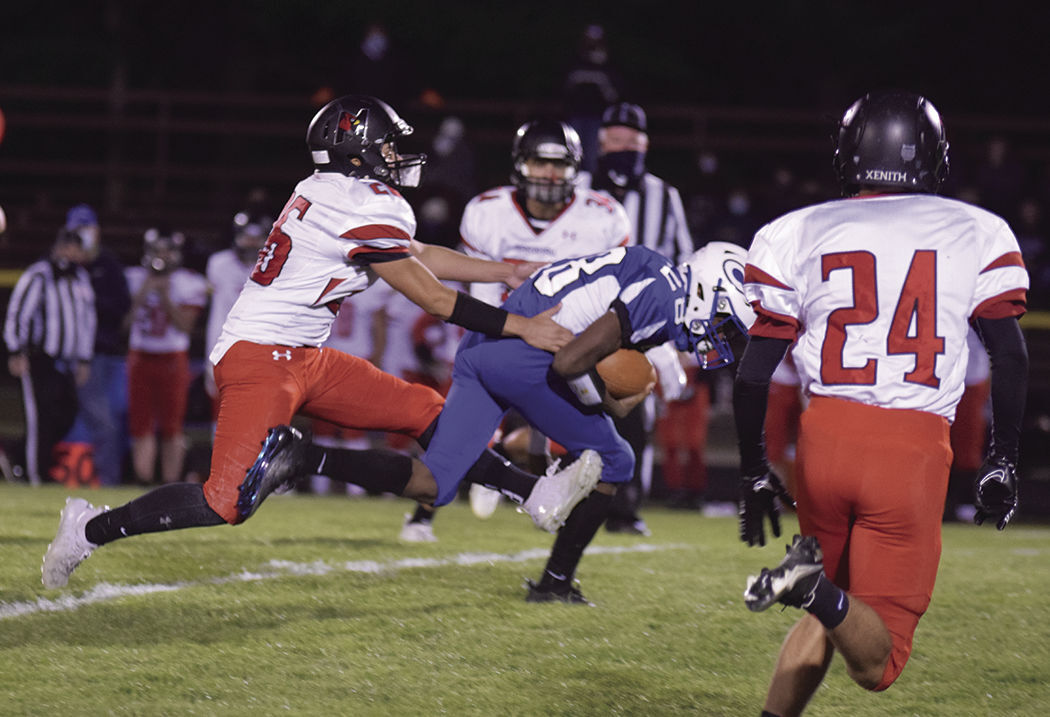 The visiting Cardinals used their size, physicality and overall team speed to run away with a 28-3 Eastern Suburban Conference win at Bob Nodolf Field.

“It seems like it’s been longer,” Marshall head coach Matt Kleinheinz said of ending the losing streak to the Blue Jays.

The Blue Jays (1-1 overall, 1-1 ESC) drew first blood scoring on their initial drive of the game, as Ezra Stein drilled a 23-yard field goal for a 3-0 lead.

It didn’t take Marshall long to respond. After Bryce Frank returned the ensuing kickoff into Cambridge territory, Craig Ward spotted Cole Denniston all alone for a 43-yard touchdown. Frank’s point-after kick gave the Cardinals a 7-3 lead with 3 minutes, 43 seconds remaining in the first quarter, and Marshall would not trail again.

“The silver lining in that is we held them to a field goal; I think that was a big point in the game, the fact that we dug our heels in there and then we marched down and ran the trick play,” said Kleinheinz. “We had that up our sleeve and we were ready for it, we were just looking for the right opportunity and I thought it would be good to switch the momentum after we went three-and-out on our first drive.”

After forcing Cambridge to punt, Ward hit Denniston twice before the Marshall running game went to work. Freshman Matthew Motl carried four straight times, gaining two first downs, before Frank showcased his quickness when he got to the edge and outraced the Blue Jay defense to the end zone. The 24-yard touchdown upped the lead to 13-3 early in the second quarter.

“Their attention to detail this week (with the scouting report) was tremendous — that’s what separates good teams from great teams — so we’ve got to keep it going. If we do that, we’re going to be alright,” Kleinheinz said.

“They’re big and physical and they kind of took it to us,” said Cambridge head coach Mike Klingbeil. “I was kind of a gut-check time and we just didn’t respond.”

“Certainly the first half got away from us,” Klingbeil said.

Cambridge appeared to have the ship righted as the second half began when Stein engineered a nine-play drive — completing 3-of-5 passes — but the drive stalled as the Cardinal defense again stiffened and forced the Blue Jays to punt.

Marshall’s first drive of the second half all but put the game out of reach. Motl picked up a 3rd-and-3 as he got loose for 9 yards, and Frank covered 53 yards with a pair of big bursts. But Ward came up with the biggest play of the drive, and the game.

Facing a 3rd-and-13 from the Cambridge 21-yard line, Ward appeared to be sacked when two Blue Jays draped him. But, somehow, the junior flipped the ball to Motl who broke two tackles before being brought down at the 5. Three plays later, Ward snuck in from the 1 to cap off the 12-play, 83-yard drive, and Frank’s PAT gave Marshall a commanding 28-3 lead with 1:33 left in the third quarter.

“Craig’s a competitor and if you don’t get him down on the first try, he’s going to make a play like he did,” said Kleinheinz.

“We had (Ward) tackled for a 20-yard loss, and then he flicks it out there for a big gain. Sometimes, that’s how it goes,” said Klingbeil. “(Marshall) really put a nice system together really quickly, with what they can do with their tailback, the young fullback and their quarterback throws a nice ball.”

One week after Stein, Trey Colts and Jacob Moody combined for 229 yards and six touchdowns, Marshall held the trio to 97 yards and zero touchdowns.

“As good as those three are, Mr. (Ryan) Lund is a really good football player, too,” said Kleinheinz, mentioning the reigning Capitol South Lineman of the Year. “We catered our defense to take away some of their strengths this week — Kelby (Petersen) and Davonte (Holmes) were just absolute monsters in the middle — they forced everything to the edges in our secondary. I’ve said this from the word go this year, our secondary is so good: they’re a nightmare for opposing coaches and quarterbacks.”

Frank had his second-straight 100-yard game, gaining 151 yards on 13 carries.

“We tried telling our kids that this was going to be a street fight, but I don’t think we responded that way,” Klingbeil said.

Cambridge had won three straight games in the annual meeting, including 23-13 last year. The Cardinals last defeated the Blue Jays 36-21 on Oct. 7, 2016.