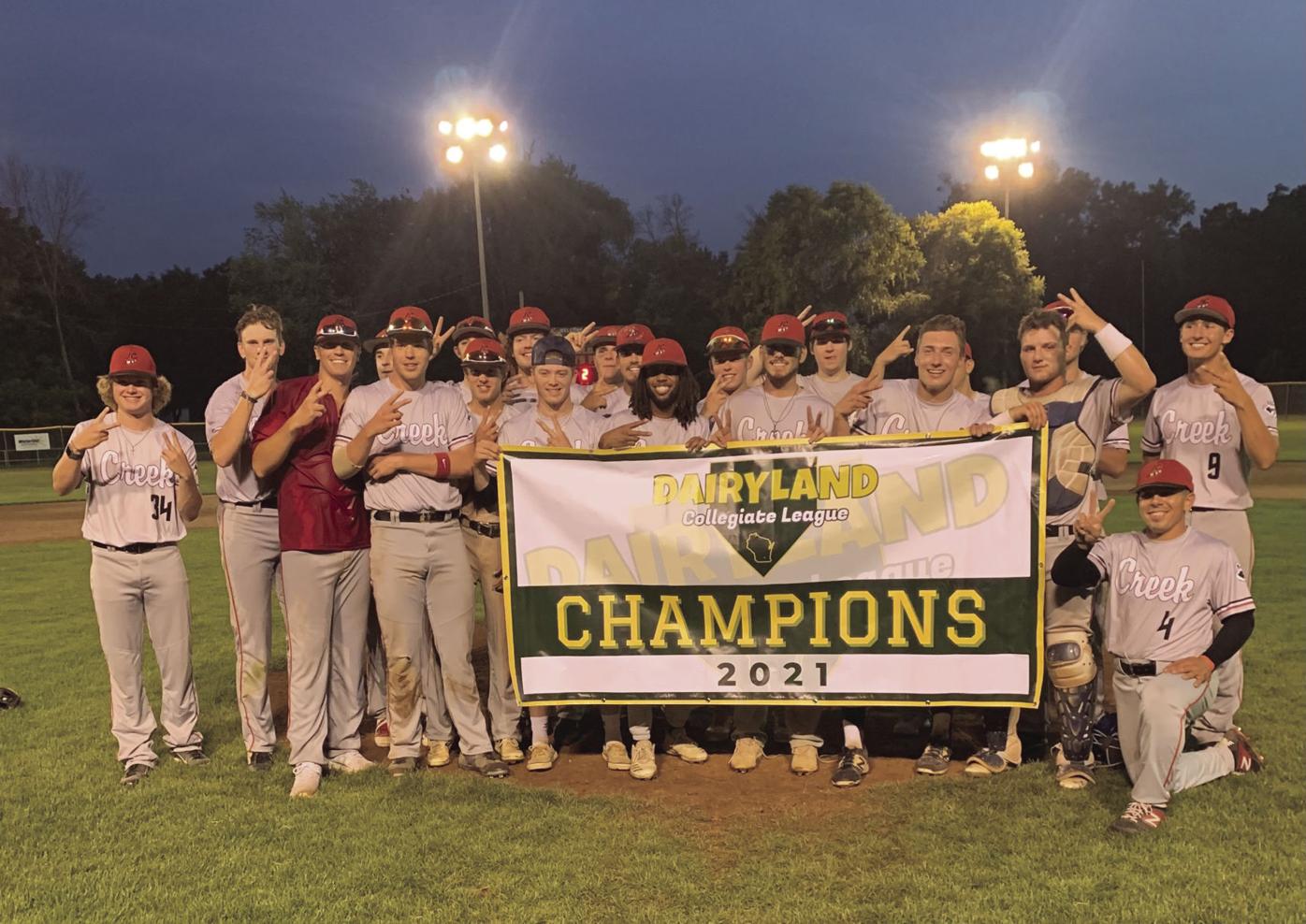 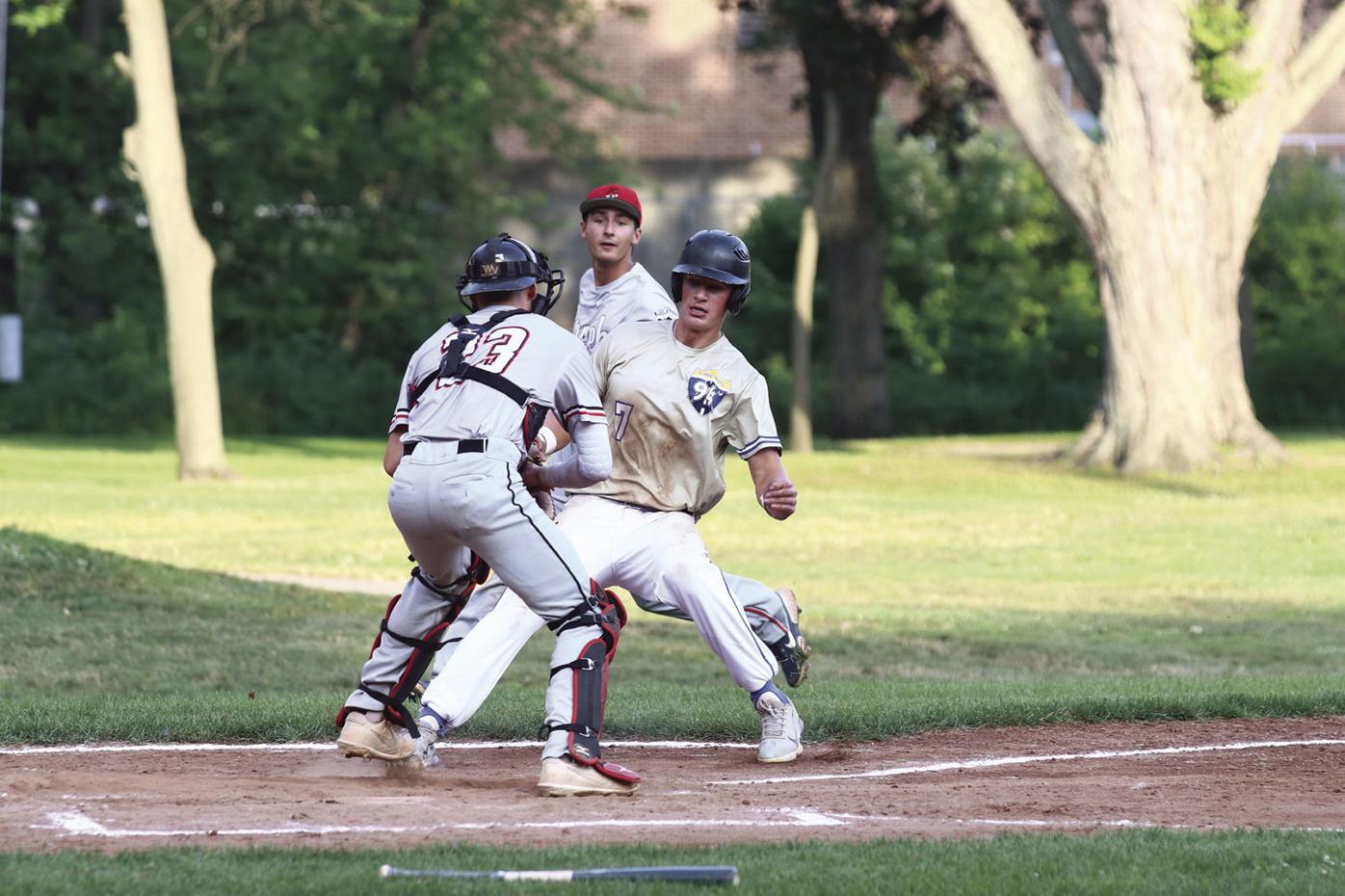 The Johnson Creek Mapaches rode lively batting to two straight victories over the Lake Mills 94’s to win the best-of-three championship series of the first season of the Dairyland Collegiate League (DCL). The DCL is a wood bat summer league for collegiate athletes, pulling talent from coast to coast into the Lake Mills-based program. Sunday night at Waterloo Fireman’s Park, the Mapaches became the league’s first champion.

The path to a championship victory started with a leisurely night off for the Mapaches. On Friday night, Johnson Creek, owner of the best record in the regular season, enjoyed a direct bid to the championship as they watched the 94’s and the Lakeside Beach Bums duke it out for a shot in the title series. With the game tied at 1 heading into the bottom of the ninth, the 94’s loaded the bases for Grant Herschberger (Olney Central Community College), who smacked a single into right field and sent his team to the championship in dramatic fashion.

Sunday night, the 94’s were looking at a sweep and were not willing to go down without a fight. Johnson Creek kept up it’s lively first-inning batting as Drew Grindahl (North Dakota State) doubled to left field to bring Tyler Young (Eckerd College) around for a score. In the bottom of the first, the Mapaches narrowly avoided disaster as 94’s outfielder Austin De La Cruz (Beloit College) accepted a looking strikeout with the bases loaded. While the first inning was fruitless, it showed that Lake Mills had found some batting rhythm.

Lake Mills scored its first run of the series an inning later when Charlie Bogue (University of Wisconsin-Whitewater) dribbled a hit back between the pitcher and third base. An errant throw allowed Jared Heinzen (University of Wisconsin-Parkside) to cross home. The bats stayed hot for the 94’s in the bottom of the third when Cody Horon (McHenry County College) dropped a blooper into right field to score Heinzen and De La Cruz.

In the bottom of the fourth, Johnson Creek pitcher Quinn Berglin (Lawrence University) let the Lake Mills bats take a break, he would score for them. He walked Matt Armendarez (Park University) to load the bases, then promptly walked the next batter, De La Cruz, to allow Dylan Carrington (Augustana College) to score. It took an impressive, diving catch by the Mapaches’ right fielder Andrew Rajkovich (University of Wisconsin-La Crosse) to escape the inning without any more damage.

Heading into the top of the fifth, the Mapaches faced a 4-1 deficit. Last night’s 9-0 victory seemed miles away while a deciding game three on Monday night seemed more and more likely. That was, until Grindahl stepped back up to the plate. His earlier RBI wasn’t enough, this time he’d score himself. He mashed a homer over the right field fence to score Justin Shields (Chaffey College), Young, and himself. Tie game.

The Mapaches retook the lead an inning later when Darren Mancke (Cornell College) smacked a grounder to the Lake Mills shortstop, which he bobbled, allowing Joe Bogdan (University of San Francisco) to cross home. In the bottom of the sixth, Berglin was replaced at pitcher by Luke Smiley (Lincoln Christian University) for Johnson Creek. This was music to Horon’s ears. With two men on base, Horon pummeled a homerun to left field, the second 3-run homerun of the game, to give Lake Mills a 7-5 lead.

Undeterred, the Mapaches went right back to the lively batting in the top of the seventh. Lake Mills pitcher Ryuya Kato walked the bases loaded, then hit Riley Zirbel (McHenry County College) to allow Young to walk across the plate. One pitch later, Bogdan dropped a lazy pop fly into shallow right field. Chaos ensued as neither the first baseman, right fielder, nor second baseman could pick it up and throw it, allowing all three runners on base to score. With a 9-7 lead in place, the Mapaches put in the closer.

Tyler Quintanilla (American River College) came in to pitch for Johnson Creek and put on a championship-worthy performance. He retired the first 7 batters he saw consecutively with four strikeouts. He allowed no hits, just a walk in the bottom of the ninth. His teammates gifted him an extra insurance run in the top of the ninth, which was more than enough as Quintanilla continued to shred through the 94’s lineup. A groundout sealed the deal, a 10-7 Mapaches victory.

“That’s just the goal,” Quintanilla said. “You’re out there, the goal is to shut them out. It was a great battle and one hell of a game. As a bullpen guy, I just had to come out here, throw strikes, and shut them down.”

In the postgame celebration, Johnson Creek broke out the milk, flinging it high in the air and dumping it on their teammates and coaches. Why wouldn’t they? They were Dairyland champions.

“It’s pretty cool,” Bogdan said of taking home the championship. “I came out here, a long way from home. Just being out here and playing baseball is cool. To be the first team to win a DCL championship, it was just a great experience.”