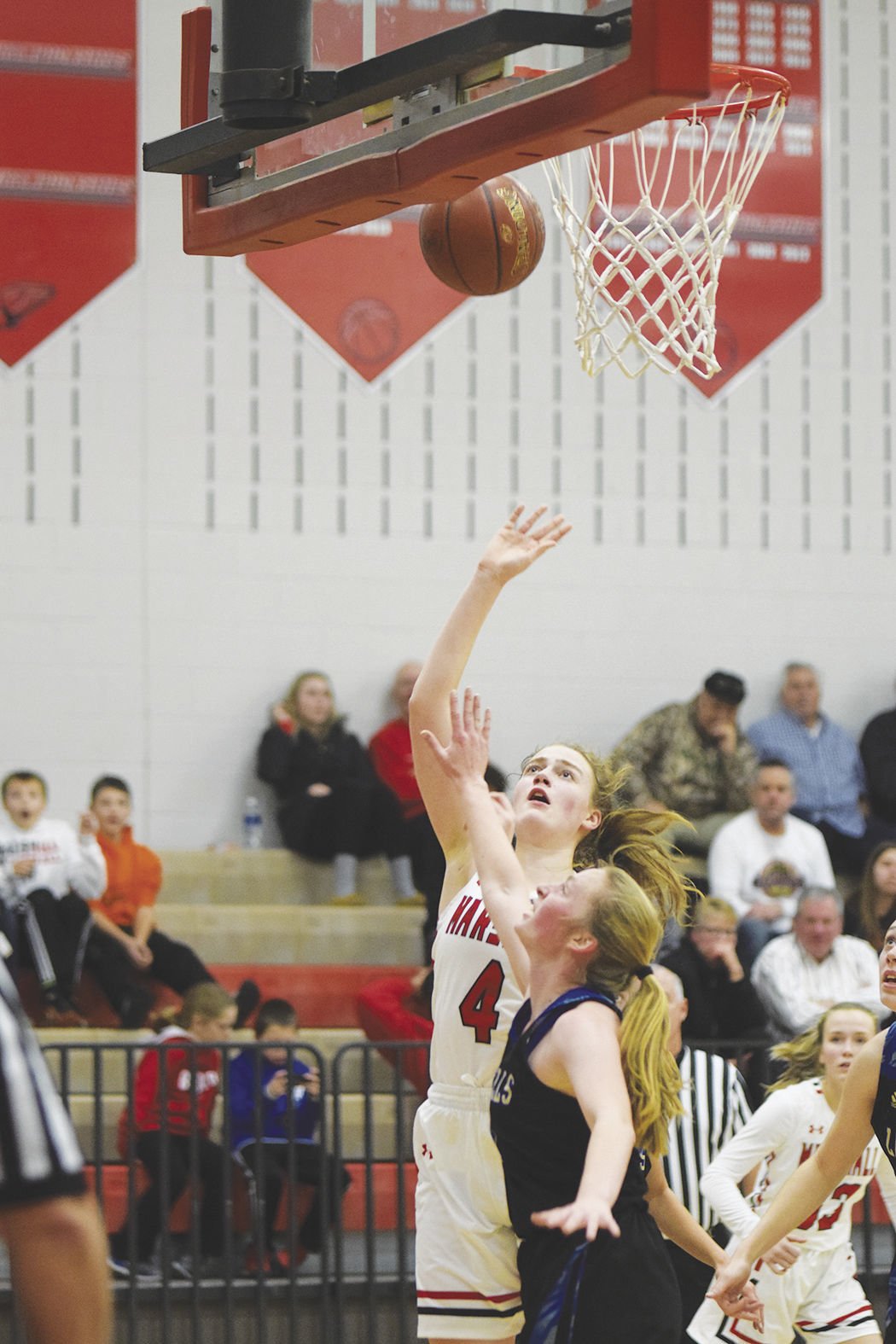 With this layup at the 1:27 mark of the first half Anna Lutz became the fifth member of the Marshall girls basketball program’s 1,000-point club. 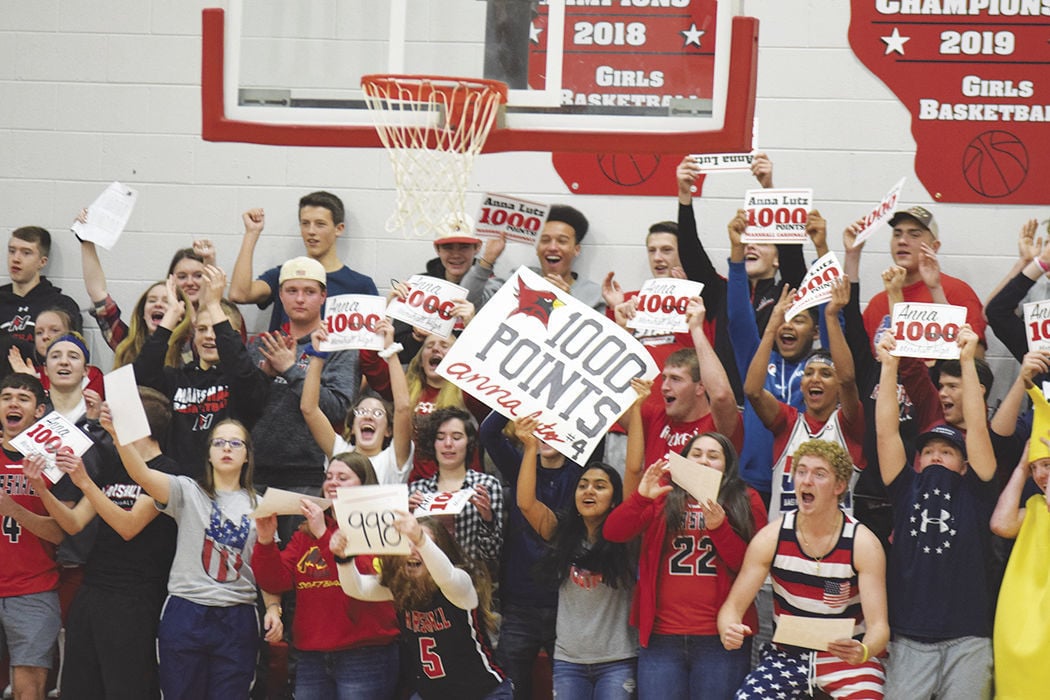 With this layup at the 1:27 mark of the first half Anna Lutz became the fifth member of the Marshall girls basketball program’s 1,000-point club.

Joining the 1,000-point club is always special, but it was a little bittersweet for Marshall’s Anna Lutz.

Needing only four points Lutz, a 6-foot-1 junior post, scored eight to become only the fifth player in program history to reach the career milestone. However, it came in a 58-57 loss to Lake Mills at home Dec. 5.

Lutz, being defended well by L-Cat 6-footers Vivian Guerrero and Kayla Will, was held to just four baskets and over 20 points under her season average.

Lutz scored her 998th point on a 12-foot jumper midway through the first half, before scoring her 1,000th on a layup with 1 minute, 27 seconds left before halftime.

“We are not used to having anyone face-guard us, but Lake Mills did a really good job,” said Lutz. “I definitely think we could have played better as a team.”

In a battle of state-ranked and defending conference title teams the visiting L-Cats used a late rally, capped off by Guerrero’s three-point play with 14.2 seconds remaining, to knock off the two-time defending Division 3 state champion Cardinals, 58-57, last Thursday.

The L-Cats (5-0), ranked sixth in the WisSports.net Division 3 poll, and Cardinals (3-2), ranked fourth, entered the early-season showdown as reigning Capitol Conference champions (Lake Mills shared the North with Lodi while Marshall won the South). And despite trailing by as many as six points with just under 6 ½ minutes remaining Lake Mills went on a late tear, outscoring Marshall 7-1 in the final 1:33 to pull off the upset.

Marshall led 53-47 after junior Laura Nickel buried a pair of free throws with 6:24 remaining. But four consecutive points, two each by McClain Mahone and Julianna Wagner, brought the L-Cats back to within a point with just over 1 ½ minutes remaining.

After Rain Held hit 1-of-2 free throws to give the Cardinals a 57-55 lead, Guerrero connected on a layup and was fouled by Anna Lutz leading to the three-point play.

Lake Mills took a 28-25 lead into the halftime break after outscoring Marshall 19-8 over the final eight-plus minutes. Junior Hannah Lamke led that rally scoring all nine of her points, including a pair of 3-pointers.

Lamke’s play was key after the L-Cats lost junior starter Taylor Roughen to an ankle injury just 6:13 into the game.

The L-Cats opened the second half with a full-court press, which at times frustrated the Cardinals and caused several turnovers that led to points in transition.

“It’s turnovers, we didn’t take care of the ball,” said Marshall head coach Doug Pickarts. “I thought we had them worn down when we got that lead and I was just about to call a timeout, then our girl cups the ball — we had three or four turnovers in the last five minutes and you just can’t do that against a team like Lake Mills — it kind of snowballed from there.

“Not taking anything away from Lake Mills, they played their butts and they deserved to win, but we didn’t compete down at the end and that disappoints me.”

“We knew we could turn them over and use our athleticism, that way we could keep the ball out of (Laura) Nickel and Lutz’s hands as much as possible,” LM coach Brandon Siska said.

But Lake Mills never led by more than five points at any time as Nickel and Lutz, Marshall’s reigning all-conference players, combined for 15 second-half points.

Lutz, a 6-1 junior post and reigning co-Capitol South Player of the Year, entered the game just four points shy of 1,000. But Lake Mills’ blanket-like defense, led by Guerrero and junior Kayla Will, made her work for every single point.

Marshall used a 10-0 run — keyed by 3-pointers by senior Rain Held and freshman Halle Wiesensel — to build a 17-9 lead midway through the first half. But Lake Mills would rally. Back-to-back 3s by Lamke and Julianna Wagner completed a 13-0 outburst as the L-Cats regained the lead just before halftime.

“We weren’t running out offense and I pull them in and told them to just relax and think,” said Pickarts. “What people don’t understand is that we only have three kids that played substantial minutes last year, and one of them is coming back from an injury. It’s a growing process that our team is going through. We’ll be fine down the road, this will make us a better team.”

Nickel paced Marshall with 16, while Held and Andrews added 12 and 11 points, respectively.

“This isn’t our season, we lost to a very talented team, maybe one of the best teams in D3, but again, we should have won. We just have to figure it out,” Pickarts said. “That’s why we play these games, I’d play them again and again.”

Wagner led all players with a game-high 21 points.

Lutz scored 30 points as Marshall won the battle of WIAA state qualifiers for the second year in a row.

The two-time defending Division 3 state champion Cardinals upended the Cheesemakers, a Division 2 state semifinalist, for the second year in a row after defeating them 64-51 last February in a game played at JustAGame Fieldhouse in Wisconsin Dells.

It was the second time already this season Lutz reached the 30-point barrier, after scoring a career-high 32 points in a 62-52 win over Poynette on Nov. 26.