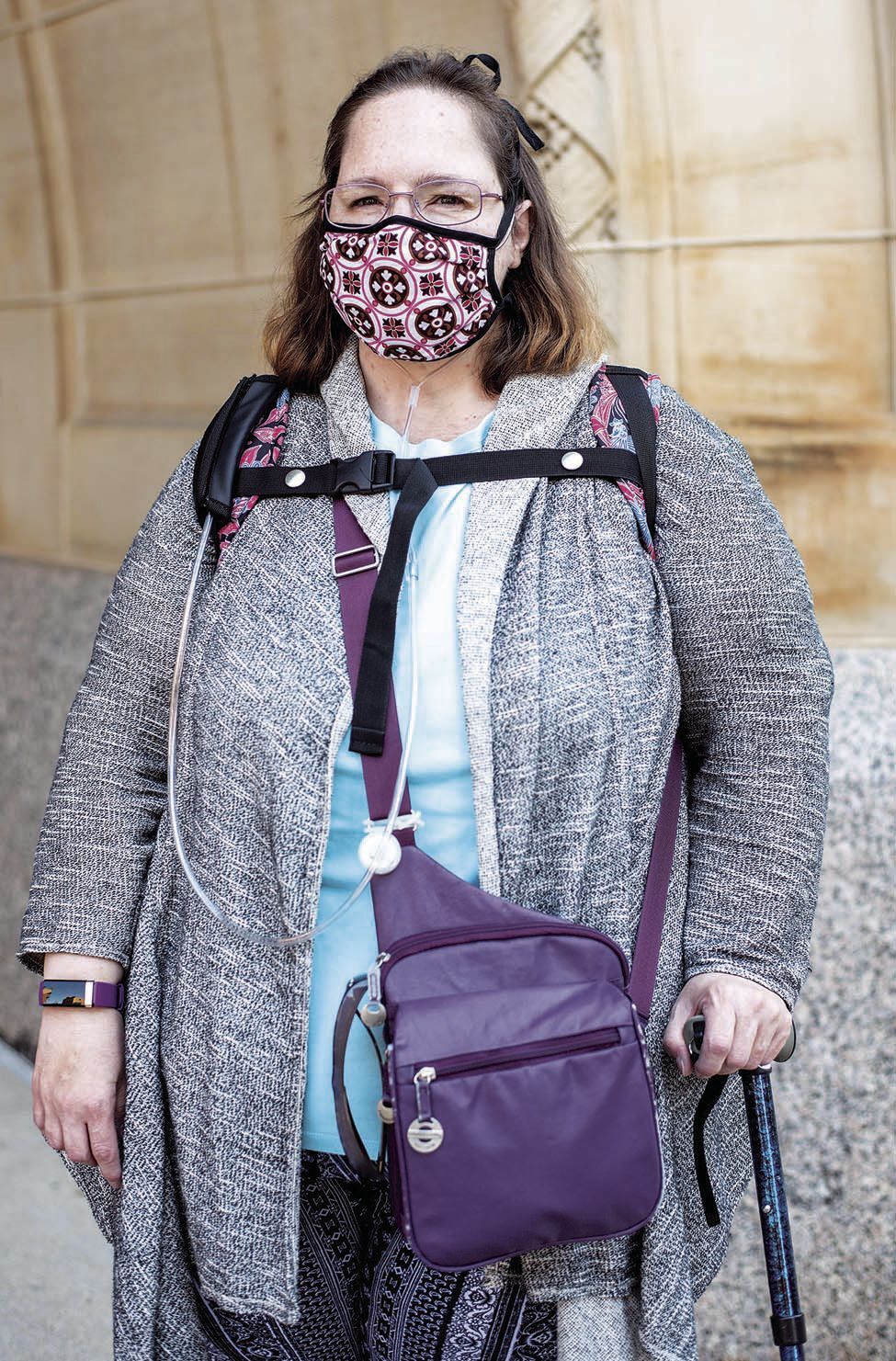 Lee Ann Medina stands outside of Milwaukee City Hall after delivering her absentee ballot on Aug. 11, 2020. Medina did not vote in the April election because she was unable to secure a witness for her absentee ballot and feared in-person voting during the pandemic. 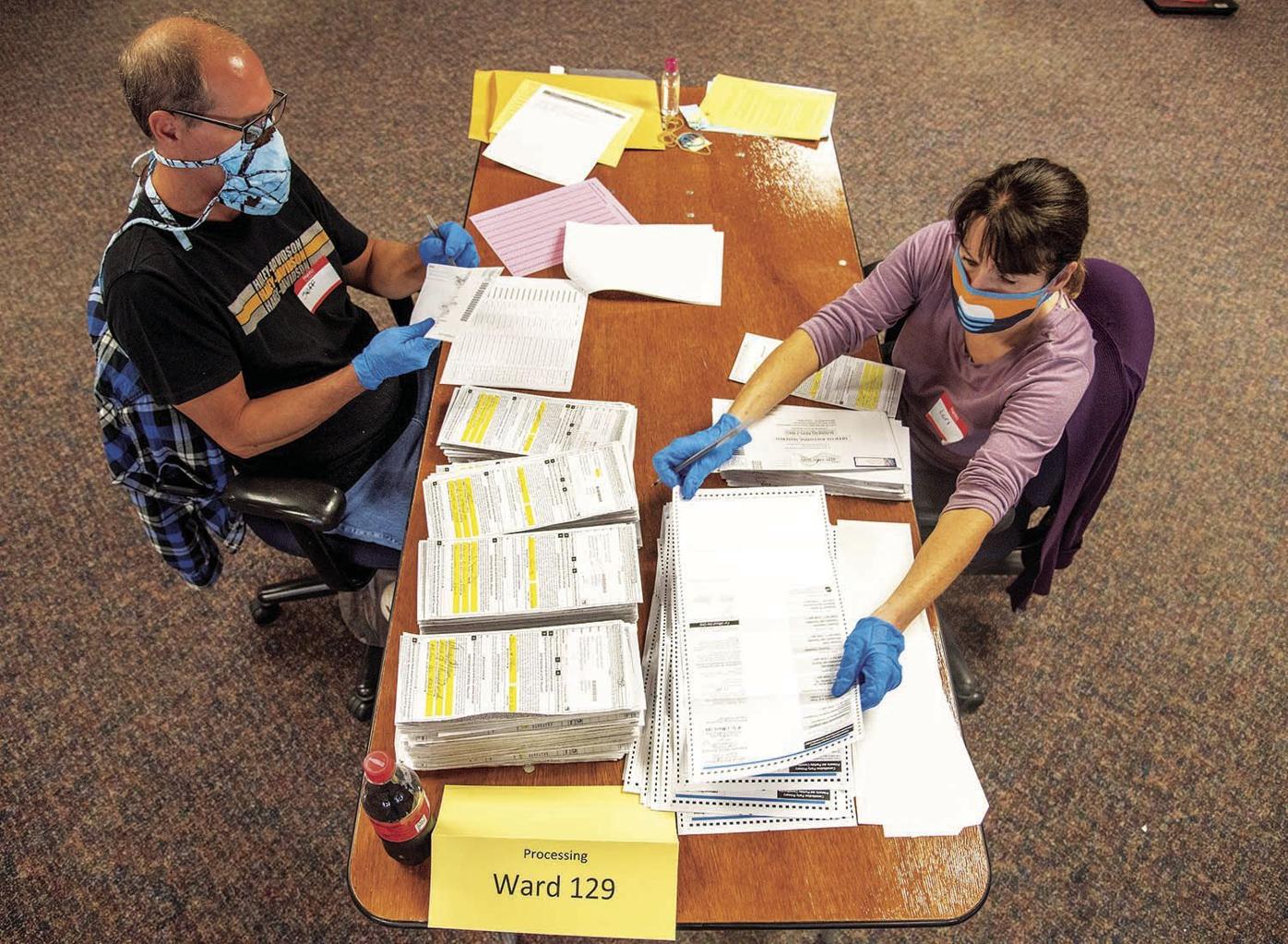 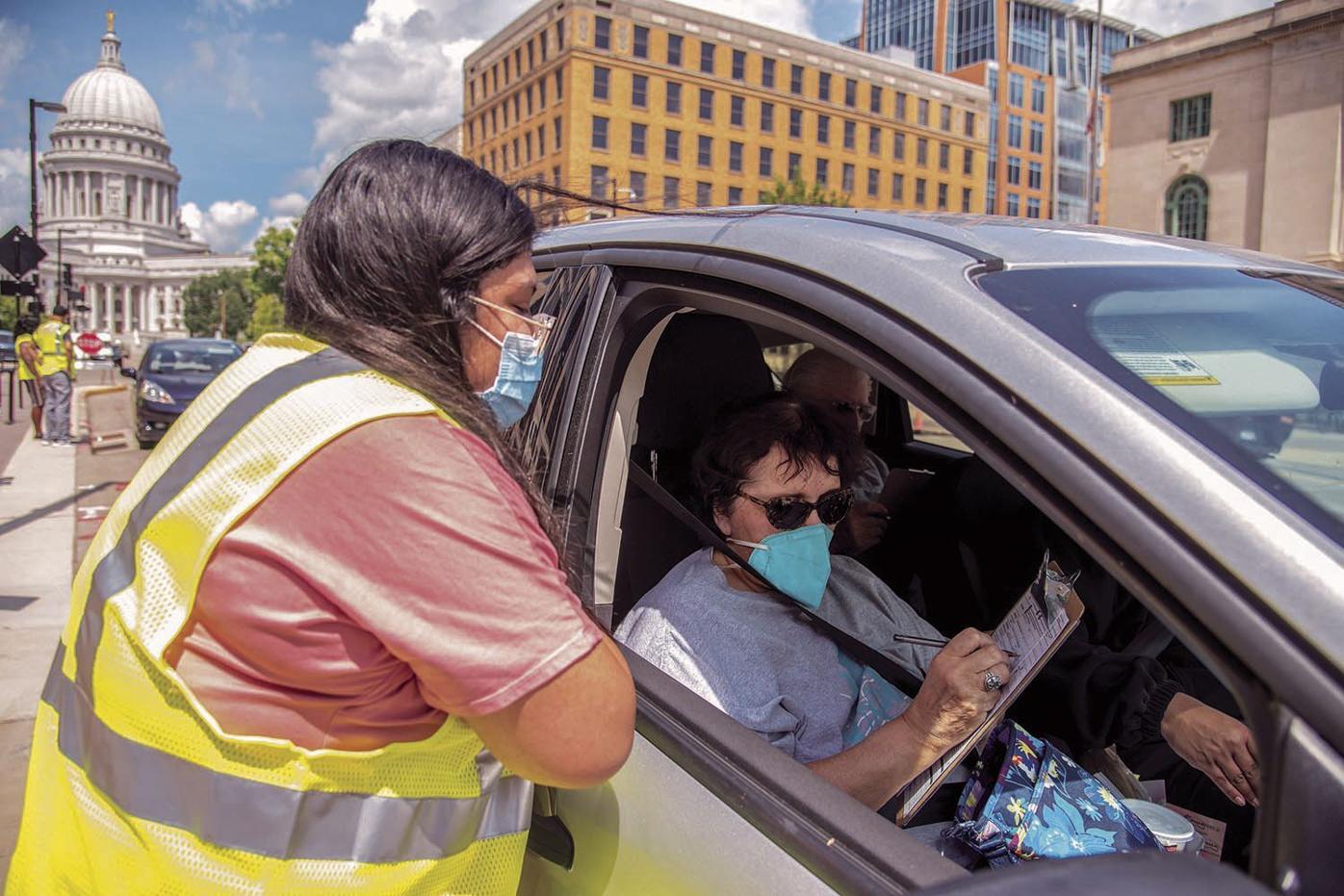 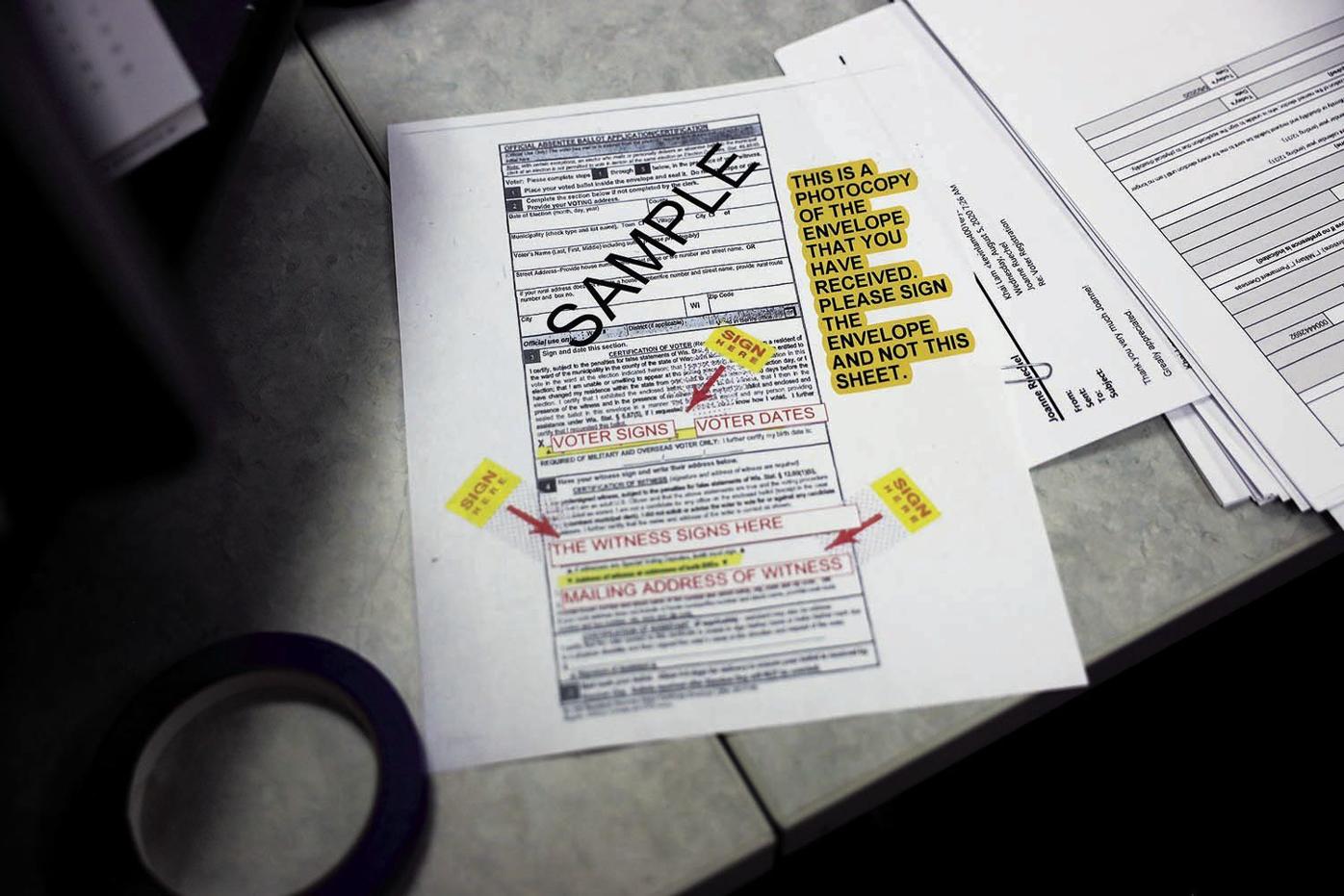 Joanne Ruechel, town clerk of Rib Mountain, Wis., sent out 1,348 absentee ballots ahead of the Aug. 11, 2020 partisan primary, and included a sample ballot with instructions on how to fill it out, to try to prevent the errors she saw during the April 7, 2020 primary. She made these instructions by hand, as they were not provided by the county or state for the election. Photographed Aug. 11, 2020. 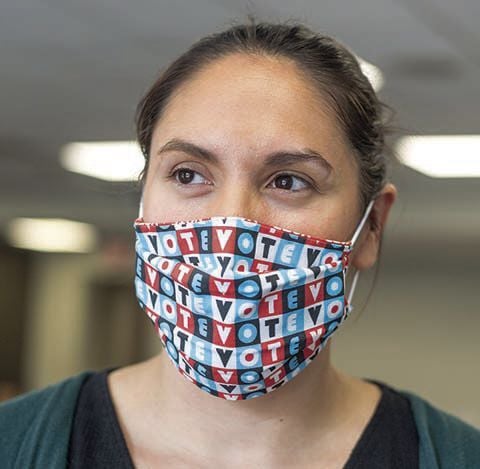 Nikki Perez, a municipal clerk for the city of Madison, Wis., is seen in the ballot sorting room of Madison’s City-County Building on Aug. 5, 2020 as workers organize absentee ballots for the election on Aug. 11.

Lee Ann Medina stands outside of Milwaukee City Hall after delivering her absentee ballot on Aug. 11, 2020. Medina did not vote in the April election because she was unable to secure a witness for her absentee ballot and feared in-person voting during the pandemic.

Joanne Ruechel, town clerk of Rib Mountain, Wis., sent out 1,348 absentee ballots ahead of the Aug. 11, 2020 partisan primary, and included a sample ballot with instructions on how to fill it out, to try to prevent the errors she saw during the April 7, 2020 primary. She made these instructions by hand, as they were not provided by the county or state for the election. Photographed Aug. 11, 2020.

Lee Ann Medina of Milwaukee says a constellation of factors conspired to prevent her from casting a ballot in Wisconsin’s spring primary.

Medina registered online and got her absentee ballot in the mail without much trouble,. But she did not realize she would need a witness signature, which posed a problem since she was living alone and practicing social distancing.

So she considered in-person voting instead.

However, Medina — who does not drive and is immunocompromised — was uncomfortable taking public transportation to a polling place. She also feared the strain of waiting in line for several hours because a lack of poll workers had forced Milwaukee to reduce its number of polling places from about 180 to five.

“I was in a conundrum,” Medina said. “And I had to make a decision ... to vote and risk my life, or to not vote and lose what I feel is my right.”

Ultimately, Medina did not vote.

To avoid such disenfranchisement, Wisconsin officials are implementing a series of changes to help make mail-in balloting smoother in November.

Relative to other states, Wisconsin has already lowered the barriers to casting a mail-in ballot in some ways: the state offers no-excuse voting by mail and provides a wide window of opportunity to register and request a ballot. However, strict voter ID laws and problems during the April primary, which included thousands of rejected ballots, have sparked calls for Wisconsin to do better.

Meanwhile, municipal clerks are scaling up staffing at offices and polling places, installing drop boxes and providing safe in-person ballot-casting options to move the election forward despite the COVID-19 pandemic.

Clerks, Republicans who run the state Legislature and nonprofit, legal and academic experts all believe the election can be held safely and securely. With enough planning and reasonable safeguards, they say, Wisconsin can expect to see a fair mail-in process on Nov. 3 — and the state might even see the highest turnout ever.

As the COVID-19 pandemic intensified last spring, 74% of voters in the April primary decided to forego the polls on Election Day and cast ballots by mail or earlier in person.

Just 10% used those options in April 2016. That meant clerks had to process more than 900,000 mail-in ballot requests, meeting enormous demand in just a few weeks.

“When those requests really started picking up, we were probably working 12 to 14 hour days, around the clock, throughout the weekend,” said Nikki Perez, a certified municipal clerk on the emergency management team at the Madison City Clerk’s office.

After ballots are returned, clerks must verify voter and witness signature and address requirements have been met, contact voters who did not meet requirements, open envelopes, feed ballots through machines and, finally, tally the votes.

Wisconsin law forbids clerks from opening and processing returned absentee ballots until Election Day. A massive shift from in-person to mail-in voting creates a huge backlog of ballots that must be processed in a matter of hours.

Ballot rejections also were a problem in April, including in communities such as Rib Mountain. Clerks there rejected 112, or 9% of mail-in ballots, according to analysis by APM Reports.

Town Clerk Joanne Ruechel said the rejections were mostly due to residents not signing the certification on the ballot, not having the ballot witnessed or providing no contact information for her to follow up with them if there was an error.

Such problems were common statewide, leading to more than 23,000 rejections overall. Clerks in Wisconsin are encouraged, but not required, to notify voters if their absentee ballots are rejected.

To reduce confusion and the chance of rejection, Ruechel is providing new information to voters in absentee ballot envelopes.

“(In August) I sent a separate sheet with a photocopy of the envelope, saying ‘Voter signs here, date, the witness signs here and the address goes here,’” Ruechel said. “Everything is in color and highlighted, so they actually have a visual of what their envelope should look like when they get done voting.”

The strategy appears to have worked. Just eight of the 822 mail-in ballots cast in August were rejected, Ruechel said.

And the agency is sending voting information to most registered Wisconsin voters advising them how to quickly request an absentee ballot. Clerks will begin sending out ballots on Sept. 17.“We learned a lot from what happened in April,” said Elections Commission spokesman Reid Magney. “So our team was able to do a very thorough assessment, (and) figure out what it was we needed to do … to make that process much easier.”

Magney said software has been streamlined to make it simple for clerks to check IDs and automatically generate printed labels without as much manual entry.

Perez said the new process is “insanely faster” compared to April, when thousands of ballots were waiting in the queue.

Meanwhile, intelligent barcodes on envelopes will enable tracking from clerks’ offices to voters and back again in many jurisdictions — a new feature for the upcoming election.

Another difference in November will be that people who voted by mail in April already have photo IDs on file, so they will not need to submit a new one to get a ballot.

In April, Wisconsin had a 1.8% rejection rate for absentee ballots — similar to past elections. But when thousands more vote by mail, that can lead to many more rejections.

“There are just a lot of vulnerabilities in that chain that don’t exist when a person’s voting in person,” Burden said. “The effective disenfranchisement of voters is a substantial problem that is systematic and widespread when it comes to voting by mail.”

Sylvia Albert, director of voting and elections at Common Cause, said many more people in Wisconsin are barred from voting by requirements designed to prevent fraud — like voter ID and witness signature requirements — than would justify their use.

“You have (a greater) chance of being struck by lightning,” she said, than “having your ballot improperly messed with.”

Wisconsin law allows mail-in voters to request absentee ballots until the Thursday before the election. However, experts call that timeline unrealistic.

“We have been aware for years that there is a conflict between Wisconsin statutes setting the deadline for requesting an absentee ballot the Thursday before the election and the week that (the Postal Service) says it needs to get a piece of mail from point A to point B in Wisconsin,” Magney said. “That is why we have been urging voters to act as early as possible to request absentee ballots and to return them as soon as possible.”

In a set of federal court cases currently before the Western District of Wisconsin, Judge William Conley hinted during a recent hearing that he may extend the deadline of 8 p.m. on Election Day to receive mail-in ballots. No matter what Conley decides, however, it likely will be appealed.

The U.S. Postal Service has warned states with deadlines close to the election that it might not be able to deliver ballots on time. Voters who wait until the last minute can drop their ballots off at drop boxes, clerks’ offices or polling locations.

Milwaukee Election Commission Executive Director Claire Woodall-Vogg said her office is providing drop boxes and has hired a communications firm to help produce informational videos about absentee voting.“My best advice would be to request your ballot now, and mail it back as soon as possible if you are going to mail it,” said Perez.

Amber McReynolds, CEO of the nonprofit National Vote at Home Institute, applauded the steps Wisconsin is taking but said there is room for improvement.

These improvements include making drop boxes available in all jurisdictions and eliminating what she calls ineffective security measures — like witness signature requirements — that create barriers to voting while offering little security.

McReynolds also suggested that Wisconsin adopt “drive-up drop off” in which election inspectors collect and witness absentee ballots outside a polling place without asking voters to leave their cars. Madison, Milwaukee and other jurisdictions used this technique in April.

She also advocated “text-to-cure,” a system by which clerks can text voters whose mail-in ballots have errors and allow them to correct them by text. For example, a voter who forgot to sign the ballot envelope could deliver a signature to the clerk by text.Ruechel, the Rib Mountain clerk, favors a bill that passed the Assembly in February allowing clerks to process ballots — but not tally the results — before Election Day.Despite fears over COVID-19, the Postal Service’s capacity to deliver ballots on time and voters’ ability to properly fill them out, many believe November’s election will still see heavy turnout, says Kelly Michaels, the Brookfield, Wisconsin city clerk and former president of the Wisconsin Municipal Clerks Association.

Said Michaels: “I don’t have to dust off my crystal ball too much to know it’s gonna be big.”

This project was funded by the Solutions Journalism Network. The nonprofit Wisconsin Watch (www.WisconsinWatch.org) collaborates with WPR, PBS Wisconsin, other news media and the University of Wisconsin-Madison School of Journalism and Mass Communication. All works created, published, posted or disseminated by the Center do not necessarily reflect the views or opinions of UW-Madison or any of its affiliates.