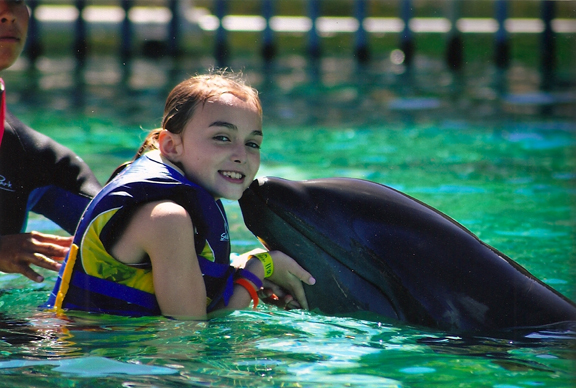 Kamden Fitzgerald had the opportunity to swim with the dolphins while on her Make A Wish trip to Hawaii. During the trip, she also swam with wild dolphins while snorkeling. Swimming with dolphins was one of the things Kamden most looked forward to before the trip. 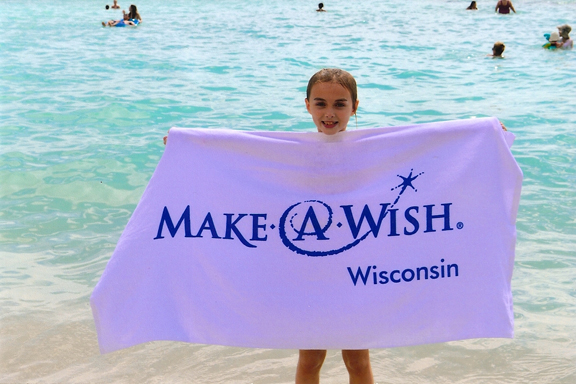 Kamden and other Make A Wish participants were given towels for their trips. Kamden and her family even met a few other families visiting Hawaii thanks to Make A Wish because of their personalized towels.

Kamden Fitzgerald had the opportunity to swim with the dolphins while on her Make A Wish trip to Hawaii. During the trip, she also swam with wild dolphins while snorkeling. Swimming with dolphins was one of the things Kamden most looked forward to before the trip.

Kamden and other Make A Wish participants were given towels for their trips. Kamden and her family even met a few other families visiting Hawaii thanks to Make A Wish because of their personalized towels.

“You wouldn’t pick her out of the crowd and say she has cancer,” said Stacy Fitzgerald of her 10-year-old daughter Kamden.

Kamden, however, was diagnosed in January with chronic myeloid leukemia, a rare form of cancer affecting only about one in a million people and found more commonly in adults 65 and older.

Shortly after being diagnosed, Kamden was nominated for the Make A Wish program, which grants a wish for children with life threatening diseases.

Kamden’s wish of traveling to Hawaii was granted thanks to money raised by Kraemer Wisconsin Cheese of Watertown.

Kamden was one of several children to benefit from $21,350 raised for Make-A-Wish Foundation of Wisconsin through the Kraemer Wisconsin Cheese of Watertown golf outing held at the Watertown Country Club.

There were 124 golfers who participated in the outing that included 18 holes of golf, raffles, silent auction, dinner and prizes.

Rich Kraemer and the Kraemer family have been hosting the annual outing since 1995, and, in recent years, granted 11 wishes.

The funds raised at the event helped grant wishes of four children, including Kamden’s wish to go to Hawaii.

While in Hawaii, Kamden, her parents, Adam and Stacy, and her two sisters, Chloe and Allie swam with the dolphins, went snorkeling and attended a luau. According to Stacy, Kamden’s favorite part of the trip was the luau.

Originally, Stacy said Kamden wanted to go to South Dakota, but they reminded her that this was a once in lifetime trip and that they could go to South Dakota anytime. Kamden then mentioned swimming with dolphins.

“We are so grateful to Make A Wish for granting this wish,” Stacy added. “We would never have been able to do otherwise.”

Kamden was first diagnosed after having nose bleed that lasted on and off for several days. Stacy also recalled how pale she was and decided to take her to the doctor.

According to Stacy, the doctor ran several tests and before they even got home he called her letting her know something was wrong. They then rushed to the Madison Children’s Hospital where Kamden was finally diagnosed.

Stacy, who is a nurse at the Watertown Regional Medical Center, thought maybe at first Kamden had a clot in a blood vessel that was causing the nosebleeds.

“I never thought in a million years that it was cancer,” she said.

Though Kamden’s cancer is life threatening, it is the only curable type of leukemia. It can be cured with a bone marrow transplant.

Currently, Kamden is being treated with oral chemo and is doing very well. Her youngest sister, Allie who is seven, is a bone marrow match, but Kamden’s parents consider a transplant a possibility they will worry about when the time comes.

“It’s an option if needed, but she is doing so well,” Stacy said. “There are a lot of risks associated with a transplant.”

Besides being given oral chemo every day by Stacy, Kamden has to have her blood tested at least one a month to see where her white blood cell count is at.

“[Kamden’s illness] makes you look at life a whole lot differently,” Stacy said. “We’ve been fortunate. If she was sicker, it may be harder.”

Because Kamden is given chemo orally, she does not have a lot of the side effects normally associated with chemo like hair loss.

According to Stacy, loosing her hair is the only fear Kamden has confessed so far.

“She’s a rockstar,” Stacy said of Kamden and her reaction to the chemo and diagnosis. “She doesn’t put up a fight, she just does it.”

Kamden currently attends Waterloo Elementary and is as active as any normal 10-year-old child. She has no restrictions on her diet or activity, and only misses a couple days of school a month for doctor’s appointment, Stacy said.

Stacy said she is really open with the teachers and always lets them know why Kamden is missing school so they don’t worry.

She stays busy with sports, as she is involved in basketball, volleyball and softball. Kamden also really enjoys hanging out with her friends, who her mom has titled “the five amigos.” Stacy said Kamden’s friends are very supportive of her and know all about her cancer. One of her friends even knitted her an orange hat after her diagnosis. The color orange represents leukemia awareness.

Kamden’s cancer is something she will live with for the rest of her life. Though her medicine is working for her now, there is always a possibility that it could stop working.

“There is always the fear of the unknown, but we focus on today and what today brings,” Stacy said of the possibility of the medicine not working.

Another unknown is the side effects of Kamden’s medicine. A lot of the medicine out there right now is so new that there is not a lot of research on it.

Stacy said they try not to look too much up on the Internet and are just grateful that the medicine is working for now. She said her husband Adam looked more into the study research and side effects of the medicine than she did.

Because she is a nurse, she tries to leave her work at work and just focus on being a mom at home.

“I know enough to get myself in trouble, so I try to leave nursing out of it,” she added.

Stacy and her husband remain hopeful that even if the medicine stops working the future is bright in terms of cancer research.

In just four years, doctors have already come so far with treatments Kamden’s specific cancer. According to Stacy, if Kamden had been diagnosed four years earlier she would have gone straight to having a bone marrow transplant.

Stacy said she constantly reminds Kamden how lucky she is, especially when they are at the children’s hospital.

“I make comments (about the other sicker patients), so it’s not out of reality for her,” Stacy said.

Representatives of Kraemer cheese and members of his team delivered the funds to the Make-A-Wish chapter office in Butler in September.

“We are so grateful for Kraemer Wisconsin Cheese and their commitment to the Make-A-Wish mission,” Patti Gorsky, president & CEO of Make-A-Wish Wisconsin, said. “It takes the entire community to make wishes come true, and fundraisers like the Kraemer Golf Outing not only raise funds, they help share the power of a wish.”

Since the Wisconsin chapter was founded in 1984, nearly 5,000 families statewide can attest to the power of a wish. Last year, the chapter granted a record-breaking 340 wishes and currently more than 250 Wisconsin children are in the process of having their special wishes granted.

For more information about Make-A-Wish Wisconsin or to learn how you can make a difference, call 800-236-WISH or visit www.wisconsin.wish.org.