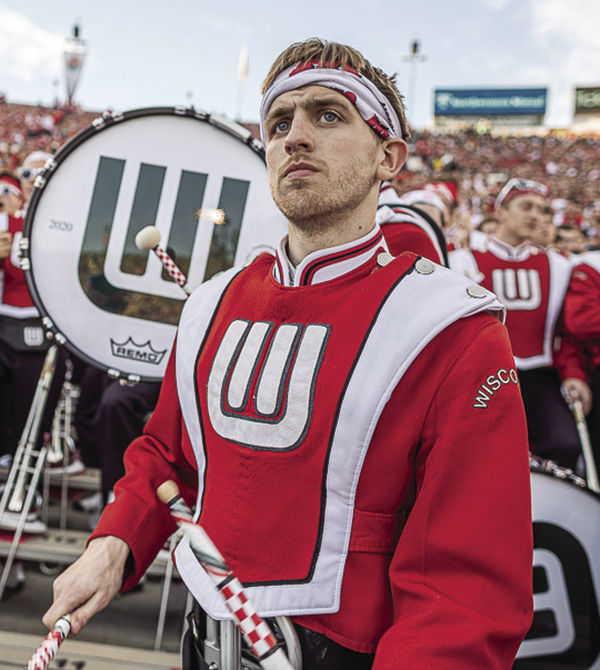 Jimmy Forman performs with the University of Wisconsin Marching Band during the 2020 Rose Bowl. Forman, a 2016 Waterloo High School graduate, has been playing the snare drum for the Badger band since his freshman year at the university.

Jimmy Forman and the rest of the UW band take to the field during the Rose Bowl game. While the Badger football team was defeated, Forman called the experience electrifying.

Jimmy Forman performs with the University of Wisconsin Marching Band during the 2020 Rose Bowl. Forman, a 2016 Waterloo High School graduate, has been playing the snare drum for the Badger band since his freshman year at the university.

Jimmy Forman and the rest of the UW band take to the field during the Rose Bowl game. While the Badger football team was defeated, Forman called the experience electrifying.

Jimmy Forman described being a part of the Rose Bowl with one word – electrifying. He said it was a word many of the UW Madison football players were throwing around when in California to play in the Jan. 1 event.

The 2016 Waterloo High School graduate was in Pasadena to perform too, but instead of rushing for yards or making tackles, Forman’s performance was measured in correct notes and proper marching technique.

While some Badger fans may have been disappointed with the outcome of the bowl game, there was certainly no reason to be upset with the UW Madison band’s parade and half-time show.

Forman has been playing snare drum with the UW Varsity Band since his freshman year in college.

“There were a lot of memories made at the Rose Bowl in California this year,” he said.

The drummer said during the Tournament of Roses parade, people were telling him to take it all in but Forman found himself more focused on ensuring his performance was great and making sure the logistics were working.

“Looking back, it was very cool,” Forman said. “Looking to the side and seeing all these people there in the grandstand cheering for us was incredible. Marching during halftime at the Rose Bowl, we did our Veteran Day’s show … and when we made our formations like an airplane and had fire extinguishers making all this exhaust, it was incredible to hear the stadium. They were really invested in that.”

The Waterloo graduate said it’s great to hear the audience applaud for the band, something Forman doesn’t always notice during other football game performances.

The UW graduate has a background in music – he started playing piano at age 4 and in middle school began to play percussion.

“One thing that really drew me to the band was when I went to one of their spring concerts in middle school and seeing the performance value, especially the drum solo, just everything happening – the band having all the fun that they do during the fifth quarter – it just seemed really cool to me. More than playing the snare drum, I wanted to be part of the organization,” he said. “It’s just a ton of fun.”

All members of the UW Varsity Band need to audition for the group; Forman’s audition occurred during the course of three days the summer before he began classes at the university.

“It was a very grueling and intensive process,” he said. “I’m very grateful to have made it through and been a part of this organization for as long as I have.”

Forman had a steady presence on the field during UW football games, saying he was lucky to be marching at Camp Randall – and other stadiums — since freshman year due to the need for plenty of snare drummers.

“I went to Lambeau (Field) twice my freshman year,” he said. “Once for the Badger-LSU game and a Packer game. I got to march in Michigan stadium, the Cowboys stadium, the Dolphins stadium, a lot of opportunities to march in all these stadiums. They’ve all been incredible experiences.”

Forman is also a staple when the band plays at UW basketball and hockey games, though prefers the latter because he’s one of the few band members who can play the full drum set during the matches.

While Forman technically graduated in December with a degree in math with a focus on computer science, the band has a program allowing students to remain enrolled in the university during the spring semester.

This year marked a shift in the band’s direction; after long-time director Mike Leckrone retired at the end of the 2019 spring semester, Corey Pompey was hired to lead the band.

While spectators may not notice differences with the band, Forman said there has been a shift. When he first joined, the group focused mainly on the athleticism of marching. Under Pompey, the students are more concentrated on the music being performed and required to memorize the songs.

“I’m really excited to see what happens in the band after I graduate,” the Waterloo resident said.