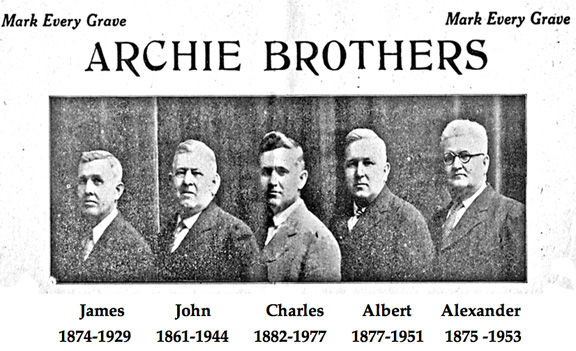 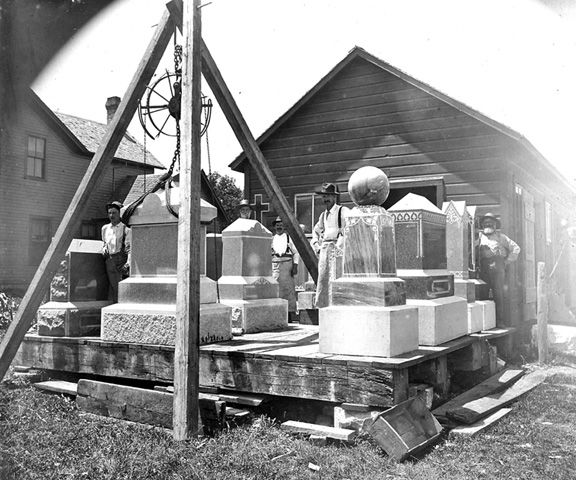 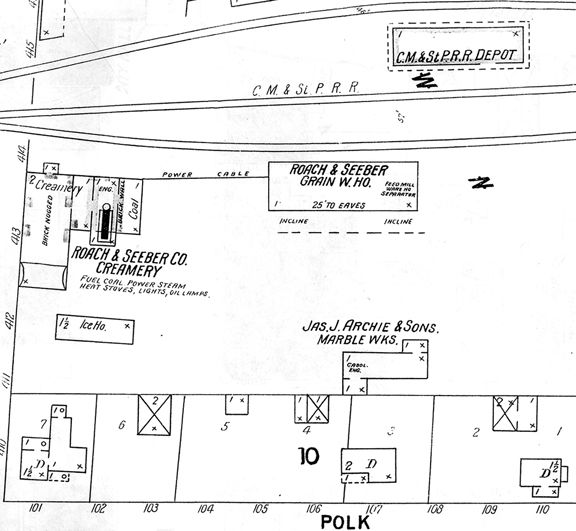 What is a monument company? What items made by human hands centuries ago exist today? Markers made to honor sacrifices or memorials should last for generations.

Such was the craft of the James Johnston Archie family and their work in granite, marble, and other elements in Massachusetts and Wisconsin.

When James J. Archie and his wife Mary emigrated to America, James J. had been working with his brothers John, William, David and Alexander as stone masons, in Scotland.  Three of his brothers emigrated to America with James J. and his wife Mary.  John opened up a monument business in Rhode Island, brother David worked a quarry at Amberg, Wisconsin, and also supervised the selection of stone for the Chicago Auditorium. Alexander Archie became a sculptor and William remained in Scotland.

Patriarch James Johnston Archie (1836-1899), and wife Mary McColl Archie had roots in Scotland, circa the sixteenth century; Aberdeenshire, then Argyllshire, Scotland.  Five children born in Scotland were John, Mary, Anna, Catharine, and Elizabeth. Circa 1865-70, the James J. Archie family arrived in America, where  James J. was employed as  superintendent  with a  Massachusetts  Granite Company. In that state five more children were added to the family; James (Jr), Alexander, Albert, Jessie and Charles.

In the next 10 years, the family moved to Wisconsin where the elder James was involved with the quarries in Portland.  With long experience on the supply side, he decided to open a retail monument business in Waterloo/Portland in 1882. Five of the sons, John (who married Amelia Hoffman), James (married to Martha Hoffman), Alexander (united to Hilda Hintz), Albert (married to Bertha Riege) and Charles E. (to Amanda Hintz) were all trained in the business by James J. Archie Sr. The Archie Brothers, Inc. business was born. The first location of James J. Archie & Sons Monument Company was located between the railroad depot, Jackson and Polk streets.

The firm flourished, soon other branches of the monument company were added  in Waupun, Oconomowoc, Fond du Lac, Mayville, and Watertown. In addition to family gravestones at cemeteries, the Archie Brothers were recognized for their outstanding work with larger memorials, such as the Hauge Monument at the Capital Square in Madison; Christians Mausoleum at Johnson Creek; The Civil War Monument at Watertown; World War Memorial at Fort Atkinson; “End of the Trail” statue at Waupun; Spanish War Monument at Fond du Lac; and Veterans Monuments at Cambridge and Lake Mills.

The Archie name lives on in other civic activities in Waterloo.  Alex Archie was engaged in village affairs, also director for the Waterloo Mutual Fire Insurance Co., and owned the Waterloo Enterprise newspaper in the early 1900’s. He also served as Waterloo postmaster and president of the Badger Medicine Company.

He made his mark in Waterloo as cited in the Wisconsin Industrial Review, April, 1907, Milwaukee. “Archie Bros. Monuments represents the best in this line of industry in the state.  The management represents many years of practical experience and is noted for superior skill in monumental work.”

It notes Alex Archie was not only involved with the company but served as secretary of the Business Mens Club, superintendent of Oak Hill Cemetery, manager of the opera house along with helping with the “Band of Brothers” building stone monuments.

Charles E. Archie served as president of the board of directors and manager of the Monument Company and was a state registered architect.

Victor R. Archie, an ordained minister also was manager and major stockholder.  It was Charles who drew the plans for Oak Hill Cemetery in 1905.  He and Alex were involved in the first organization of the cemetery. Charles E. was the last survivor of the brothers in charge of the monument business. Many other relatives and Waterloo citizens were also employed.

The obituary for James Archie Jr. mentions he was interested in the monument business and had an ardent interest in conservation. He worked with the Isaac Walton League in Waterloo, promoted planting fish in local waters, timber control, and developed a strong sense of the fraternal order of Masonic Lodge.   He helped plan and cut the stone in 1926 for the Masonic Temple on West Madison Street and planned for The Memorial Library which was then located in Veterans’ Park where the business center is now located.

John W. Archie was a salesman and manager of the Watertown office. Albert N. served as police chief in Waterloo in 1912.  Both were involved in the monument business as time permitted.

Descendants of the ancestral Archie family will live on with the memories of the Mary Archie Hat Shop in the Doering Building on East Madison Street. Several hats from the shop are at the Waterloo Historical Society Museum.  David E. Archie, sister of Mary, was a church, civic and insurance leader in the community. He operated the David E. Archie Insurance Agency after helping with the Monument Company. He was active with St. Paul’s English Lutheran Church, was a 32nd degree mason and shriner and descendent of Albert Archie.

A picture of Monie B. Archie is in the museum. Monie Archie earned a degree in music education from the University of Wisconsin in 1930. She sang, played piano and organ, and loved to work with children’s choirs.  After gradating from college she became a county school supervisor, overseeing the school libraries and reading programs. She was a traveling rural school teacher with a box of library and music books. Later she served as the librarian for 23 years at The Waterloo Memorial Library, when it was located on East Madison Street.  She was a descendent of Charles E. Archie.

James “Skip” Archie, with many other history minded people, established the Waterloo Area Historical Society between 1976-77. It is through Skip’s devotion to the history of Waterloo that many artifacts are preserved in the museum.  Another Archie, Mary Ann, a descendent of James Archie Sr., served as director and researcher also for the society.

All Archie names will be remembered  in word and stone as people honor their families when they visit cemeteries.

Remembering the past helps one understand those that have paved the way for  us that stones do tell a story whether it is a gravestone, or large Memorial Monumen.  The Archie Brothers was a monumental company indeed.