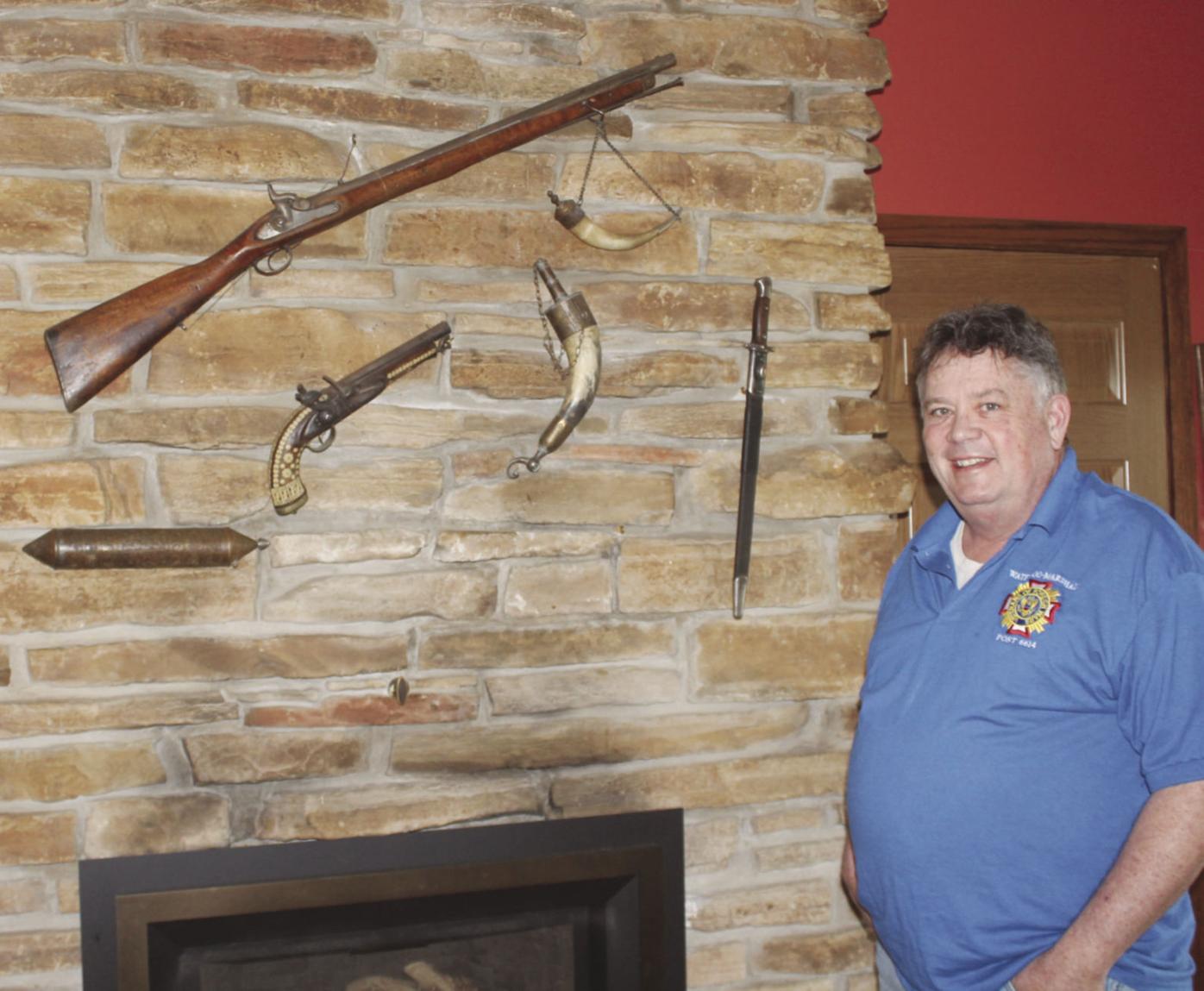 Steve Roberts poses with some of the firearms he purchased while serving in Afghanistan with the Indiana National Guard. Due to restrictions in the Middle Eastern country, locals were not allowed to have any automatic weapons or more than one bolt-action firearm. Troops would often buy firearms dating back to 1896 or earlier from Afghanistan residents for display as the United States government would not take the weapons are part of a buyback program. Roberts spent 25 years in the service — 10 years as an active member of the United States Army and 15 years with the Army National Guard 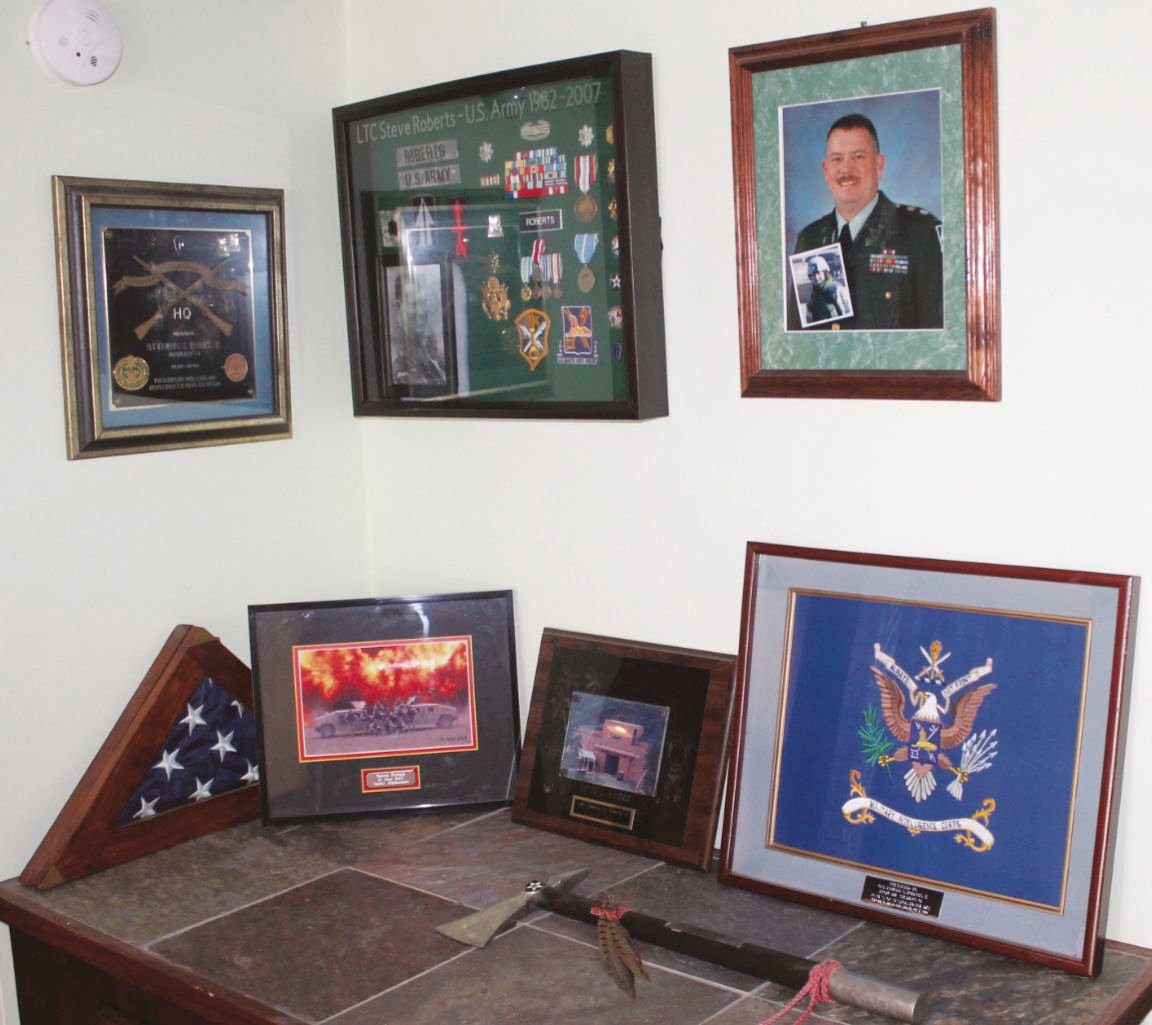 A collection of mementos from Steve Roberts time in the military, including photographs, medals and insignia are displayed in his Marshall home. Roberts served a total of 25 years before retiring in 2007. This was same year he and his wife, Susan, moved to the village.

Steve Roberts poses with some of the firearms he purchased while serving in Afghanistan with the Indiana National Guard. Due to restrictions in the Middle Eastern country, locals were not allowed to have any automatic weapons or more than one bolt-action firearm. Troops would often buy firearms dating back to 1896 or earlier from Afghanistan residents for display as the United States government would not take the weapons are part of a buyback program. Roberts spent 25 years in the service — 10 years as an active member of the United States Army and 15 years with the Army National Guard

A collection of mementos from Steve Roberts time in the military, including photographs, medals and insignia are displayed in his Marshall home. Roberts served a total of 25 years before retiring in 2007. This was same year he and his wife, Susan, moved to the village.

The pistol inlaid with mother of pearl hanging above Steve Roberts’ mantle looks like it may have been found in an antique store specializing in British or American vintage firearms. But the Marshall resident actually bought it – along with several pre-1900s weapons – from someone who lived in a community in Afghanistan.

The Army veteran, who lives in Marshall, had been deployed in 2005 with the Indiana National Guard to Afghanistan for a year.

“At the end of my time in the guard 9/11 happened and I think we knew deep down the guard would get involved,” said Roberts, who had been a member of the Wisconsin National Guard.

His unit had not been called up for deployment, but in 2004 Roberts received a call – an Indiana unit was going overseas and needed 10 more people. Wisconsin agreed to help bolster the numbers.

“I got a call at my civilian job. They asked me if I wanted to go to Afghanistan,’” said the former guard member. “I was surprised – I didn’t see it coming.

After the initial apprehension of joining an unfamiliar unit that had been training together for a length of time, Roberts said it was a very rewarding experience.

This was just one of the experiences Roberts, 60, had while in the service. He retired from the Wisconsin Army National Guard in 2007 – the same year he and his wife, Susan, moved to Marshall — after dedicating 25 years to military service – 10 active duty Army and 15 with the guard.

The deployment with the Indiana National Guard put the unit in Gardez near the border between Afghanistan and Pakistan.

“The best part was working with the Afghanistan Army,” he said, noting that while there were language barriers, “we had a lot of good interpreters.”

The units did a lot of joint patrols and Roberts said one of the best thing the United States and Afghanistan armies worked on together was going to provinces and collecting firearms while at the same time setting up medic field stations to treat local residents.

Roberts, 60, explained the province the troops visited did not allow Afghanistans to have any automatic weapons and only one bolt-action firearm per household.

“We’d go around and tell them if they had any automatic weapons they had to give them up and if they had more than one bolt-action, we had some buyback money from the Army so we could at least reimburse them while getting the weapons out of their hands,” the veteran said.

“Any pre-1896 weapons the U.S. government considered antiques and wouldn’t offer any money for,” he said.

So Roberts, along with other troops, would use their personal funds to buy some of the antiques for personal display. Among the firearms he has displayed are old Lee Enfield rifles from when the British Army was in Afghanistan in the 1800s.

“We built some good rapport with those visits,” he recalled.

Not every experience in Afghanistan went as well as those visits. Once a month, a rocket would attack the base. It took a few months before the unit’s members realized these attacks were happening on the full moon, the only time there was enough light for the enemy to see where to shoot the rocket.

“That enabled us to be ready for it and send out patrols to known points where they could shoot from,” he said.

While in Gardez, Roberts was an intelligence officer, a position he held throughout his military service. His duties included advising the troop commander where the enemy may be located or what might be their potential intent.

“What kind of unit are you expected to face and what kind of weapons they have – is it an infantry unit or is it a field artillery unit, is a tank unit and what kind of tanks does it have,” the Marshall resident who is a member of the local VFW, American Legion and Lions Club said. “You’re trying to be an expert on the enemy… You have to understand how other countries organize their armies.”

‘What are you going to do next year?’

Roberts, a Navy brat, joined the military as a way to pay for college.

“I distinctly remember senior year in high school, sitting around the dinner table and Dad must have had a plan,” he said. “He said, ‘Steve, you’re a senior now … what are you going to do next year?’

“I said, ‘Well, I thought was I going to go to college.’ He said, ‘Oh yeah, how are you going to pay for it?’ The way he said it was so perfect, like it’s as much your responsibility as it is mine.”

The veteran found out if he joined an ROTC program, it would offer him a scholarship to attend a university. Rogers applied to all of the ROTC branches “but the army was the only one that would take me.”

He enrolled in Bowling Green State University where for four years he studied radio and TV production. For each year Rogers attended college, he was required to be active duty military after graduation.

As his four-year commitment neared conclusion, Roberts signed up for another six years of active duty.

He transferred from Minnesota – where he was a recruiter – to Fort Huachuca, Arizona, the location of the Army intelligence center.

This career path resulted in a one-year deployment to the southern demilitarized zone between South and North Korea. Roberts said if North Korea decided to invade South Korea, the United States Army was posted right there at an active fire base.

“Both sides patrolled the zone on either side of the line,” he said.

“It was like a big brother, little brother relationship (with the South Korea military),” the veteran said. “At the time in the 80s, Korea was getting a bit more first world I guess you could say but it was still growing as a democratic country.”

The veteran recalled it as an eye-opening experience and believes it’s where he matured and learned more about working with other people.

Being in intelligence also ended up with 3.5 years in Hawaii where Roberts’ office was located underground an inactive volcano with a group tasked with relaying messages worldwide using high-frequency communications

“You go to work before the sun comes up practically and come out after the sun goes down,” he said. “And it was a weird work schedule where it was six days on, two days off, so you never had a true weekend especially on a weekend.”

During Roberts’ days off, he was an active scuba diver where he would encounter sea turtles, whales and dolphins. While underwater, he would find 50-caliber shells from previous military exercises that occurred off the state’s coast. The Marshall resident keeps these shells in the same container as the numerous seashells he found while living in Hawaii.

“You feel like you’re part of something bigger than yourself,” the veteran said about his time in the military. “You contribute to a larger cause and bigger mission. And there’s different challenges every day so it keeps it interesting.