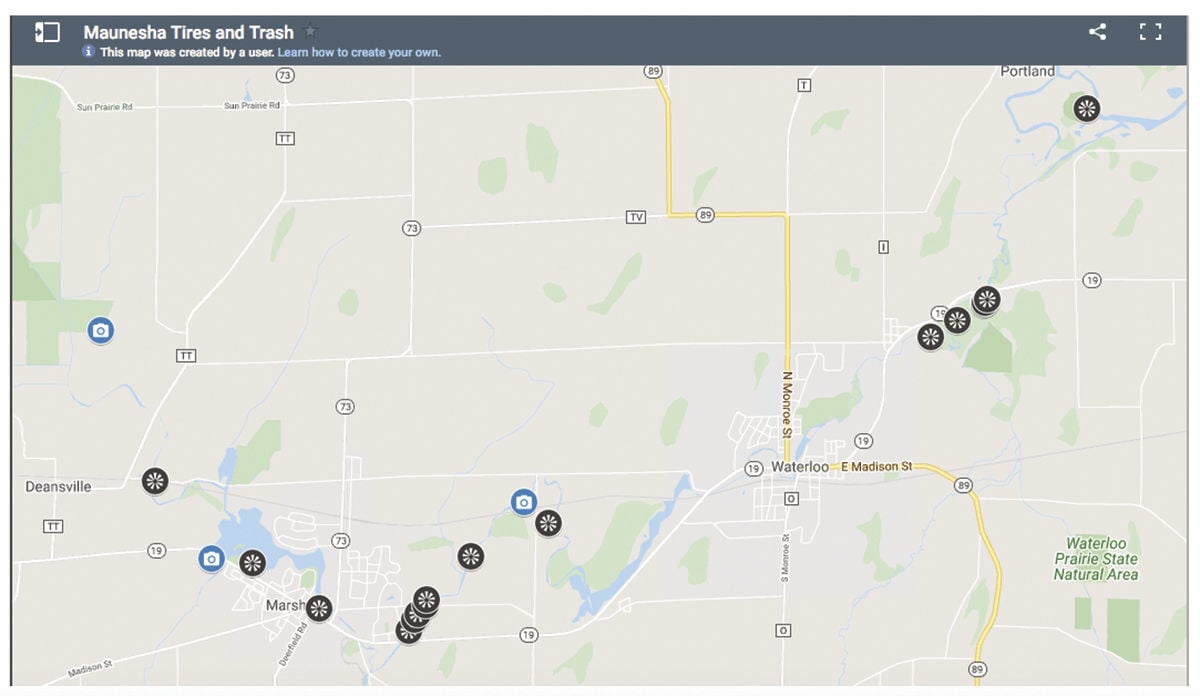 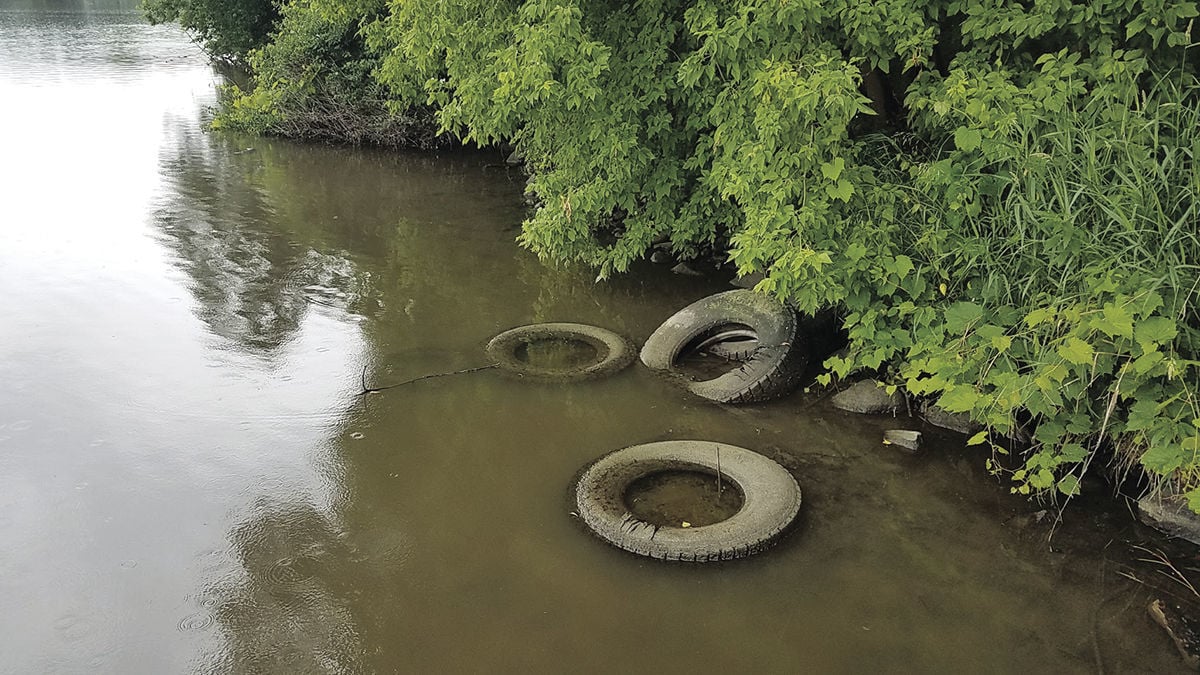 People who kayak or boat on the Maunesha River, which connects Marshall and Waterloo, might encounter a variety of wildlife. However, recently a local organization has found people are using the watershed to dispose of old vehicle tires. 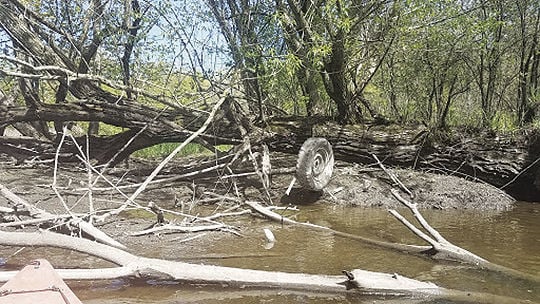 People who kayak or boat on the Maunesha River, which connects Marshall and Waterloo, might encounter a variety of wildlife. However, recently a local organization has found people are using the watershed to dispose of old vehicle tires.

There’s nothing quite like taking a kayak to the open water and getting to see the local wildlife. Paddlers on the Maunesha River may encounter beavers, carp, bur oaks, walnut trees, and a car tire in the wild.

Jason Pitzer, treasurer of the Maunesha River Alliance (MRA), has found 21 tires – including a large tractor tire that he isn’t sure of how to remove – in the watershed during the past year. Two weeks ago the total number was 16 until a load of five truck wheels were discovered at Riley-Deppe County Park.

Beginning in 2019, the Marshall resident would kayak through the river to document the location of blockages. He noticed a few tires sporadically and, at first, thought the discarded wheels were a rare occurrence.

“This year, it dawned on me this was a real problem; I started to notice it a lot,” Pitzer said. “I thought I should document (the tires) as well and it was 12 and then it was 13, 14, and the numbers kept climbing.”

Pitzer and his son went to recover a tire one day only to discover two more in its proximity; the new tires were removed but the one they set out to initially retrieve was not able to be removed during that trip.

“That’s when I felt (MRA) needs to do something about it,” the organization’s treasurer said.

As of June 30, MRA has removed approximately 16 tires. Fortunately, the Dane County landfill agreed to take any rimless and clean tires. Pitzer has taken some of the discarded wheels there, but there is a stack currently being stored at his home, out of the public view; he said the organization is deciding what it would like to do with the vehicle wheels.

“We’ve thought about making a sculpture using the ones that have rims still on them or maybe cutting some up into decorative planters, just to create visibility and build some awareness around it,” Pitzer said.

Removing the tires from the water is no easy task; the method depends on the size and location of the vehicle wheel. Pitzer had some assistance from his brother who brought his truck to pull out the five tires found at Riley-Deppe Park.

“But, there’s no way I could get a tire that size out of a wildlife area outside of Waterloo,” the Marshall resident said. “Those are pretty remote and basically what I’ll do is take a double-kayak out there and can put one in the front and have a clip strap on the back of it and clip one there if it’s a passenger tire.”

While Pitzer has been the point person for tire removal, the other MRA members have been taking note of where along the river the wheels are located.

“I think everyone’s really engaged with it and enthusiastic about it,” he said, adding the other members had similar reactions when realizing just how many tires were found in the Maunesha watershed.

The MRA treasurer, who is also a Marshall Village Board trustee, thought some of the tires may have been washed into the Maunesha River during a large flood event. After realizing the discarded wheels were located mostly near bridges or municipal parking lots, he believes part of the problem may be people who don’t want to pay to properly dispose of their vehicle tires.

“(City of Madison) landfill charges $10 (disposal fee) for a tire with a rim on it or $5 for one without a rim for a passenger vehicle tire and the prices go up from there,” he said. “People should see that not wanting to pay for that has negative consequences when they throw them in the river.”

Dane County landfill charges 10-cents per pound for tires, with an overall price of a couple of dollars. It does not accept tires with rims.

Other than creating blockages and being unsightly, there are no other major impacts from the tires. But, the Marshall man said the wheels are emblematic of a larger problem of garbage found in the watershed. The MRA has retrieved coolers, big plastic totes, 100s of softballs and 100s of bottles. And those are just the items visible from the river’s surface.

The organization has found other items near the bottom of the river including a fire extinguisher and infant car seat.

“One time, I ran my shin into a door and it hurt for six weeks afterwards,” Pitzer said. “There used to be a lot of large item metal dumps in water – water heaters, refrigerators, even cars, just tossed in the river.”

Pitzer said the organization wants to engage the public to show the impact plastic has on the environment and how everything can build up and become destructive.

“We want to show people firsthand that we have to change our behavior if we want to have a sustainable environment,” he said. “And we’re looking to continue engaging other people and invite them to help us out.”

We at the Dane County Landfill are so glad that groups like Maunesha River Alliance are taking initiative to clean up our waterways. As a note, at the Dane County Landfill we can only accept tires off of the rim and we charge $0.10 per pound which equates to about $2-3 per car or truck tire. The City of Madison will take tires with rims for $10 and tires without rims for $5. Thank you to MRA for your efforts!