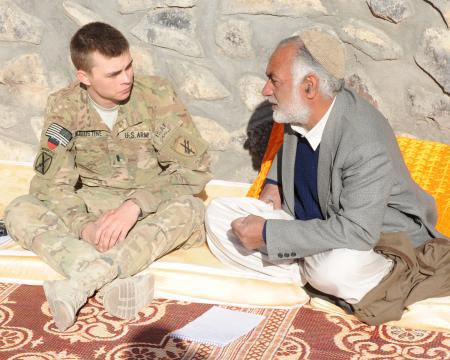 U.S. Army 1st Lt. Alexander Augustine-Marceil, Kandahar Provincial Reconstruction Team civil affairs officer from Marshall, Wis., talks with Sulieman Shah, Ministry of Rural Rehabilitation and Development, during a Governance, Reconstruction and Development meeting at the Nesh District Center Dec. 7, 2011. The PRT works with Gov. Tooryalai Wesa and the provincial government to help connect it to the people, improve security and enhance sustainable infrastructure throughout the province. 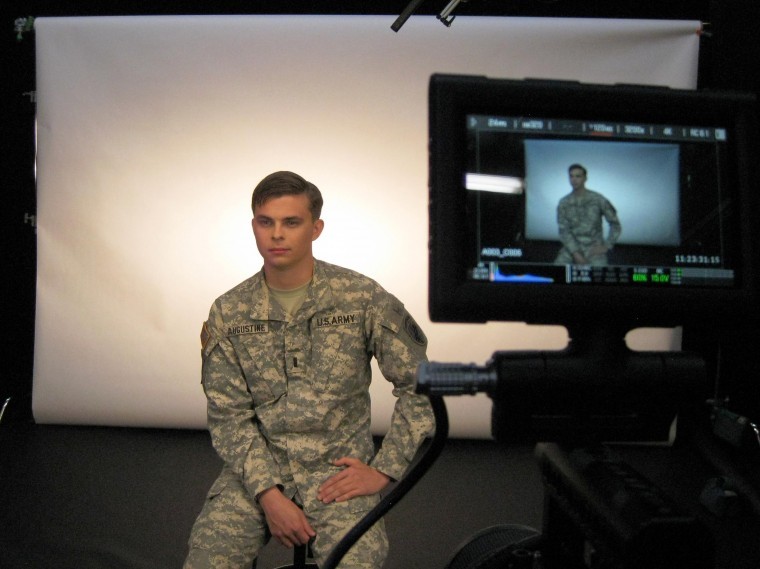 U.S. Army 1st Lt. Alexander Augustine-Marceil, Kandahar Provincial Reconstruction Team civil affairs officer from Marshall, Wis., talks with Sulieman Shah, Ministry of Rural Rehabilitation and Development, during a Governance, Reconstruction and Development meeting at the Nesh District Center Dec. 7, 2011. The PRT works with Gov. Tooryalai Wesa and the provincial government to help connect it to the people, improve security and enhance sustainable infrastructure throughout the province.

1st Lt. Alexander Augustine-Marceil, a native of Marshall and a civil affairs team chief with Charlie Company, 432nd Civil Affairs Battalion, Green Bay, has one of those unique stories about serving in the Army Reserve and shares it with the ‘Why I Serve’ Discovery Channel Project.

Augustine-Marceil resides in Arlington, Va. and entered the military because he wanted more flexibility.

“I knew I wanted to be a civil affairs officer,” Augustine-Marceil said. “By joining the Army Reserve … I was able to have more control over my career path and begin a career in the intelligence field working in a civil affairs unit.”

The Army Reserve has made him a stronger and better person he expressed.

“When people rely on you, whether it is for a weekend training plan or with their lives on a patrol, you have to rise to that challenge,” Augustine-Marceil said. “As a leader, even for personal tasks, like performing well on a PT test (army physical fitness test), are tied to the team because people look to you as an example and follow your lead. There are no excuses in that environment and I’ve grown because of it.”

Augustine-Marceil remarked that being selected for this project is an opportunity for him to help reach a new and broad scale audience about the Army Reserve.

“I’m excited to help the Army by educating the public on the many different ways one can serve,” he said. “Especially the civil affairs branch, which is an extraordinarily interesting field that is sometimes overlooked.”

While Augustine-Marceil was deployed to Kandahar, Afghanistan from June 2011 to March 2012, he worked eight to 15 hour days, six-and-a- half days a week.

“I loved it … there was never a thought about what I was doing was valuable, so it wasn’t difficult to get up early or stay until the final report was out,” he said.

In the beginning of Augustine-Marceil’s deployment, he found his job of reviewing and editing daily reports to be dull, but later his job lead to a once-in-a-lifetime opportunity for him. Because he acquired much knowledge on the situational awareness of the country through his job, he participated in a fly-over of the countryside. This was his most rewarding experience while deployed.

“I saw rows of orchards and vineyards … everywhere else in Kandahar I traveled was scarred by war, but that district was not only relatively untouched by warfare, but also by other modern things,” Augustine-Marceil recalled. “It could have been the 16th century.”

Augustine-Marceil’s future plans are to work on policy and doctrine to shape the future of civil affairs.

“I am especially interested in the intersection between civil affairs and military intelligence,” he said. “I’d also like to play a role in training civil affairs soldiers, especially with our military partnerships,”

Augustine-Marceil attended the Department of State’s Foreign Service Institute in January 2011. He is a graduate of John F. Kennedy Special Warfare Center and School as a civil affairs officer in May 2011, and graduated from the U.S. Army Intelligence Center of Excellence as an intelligence officer in December 2010. He was commissioned in 2009 after attending the Reserve Officer Training Corps at the University of Wisconsin-Oshkosh, where he received a bachelor’s degree in international studies with a global/national security emphasis.