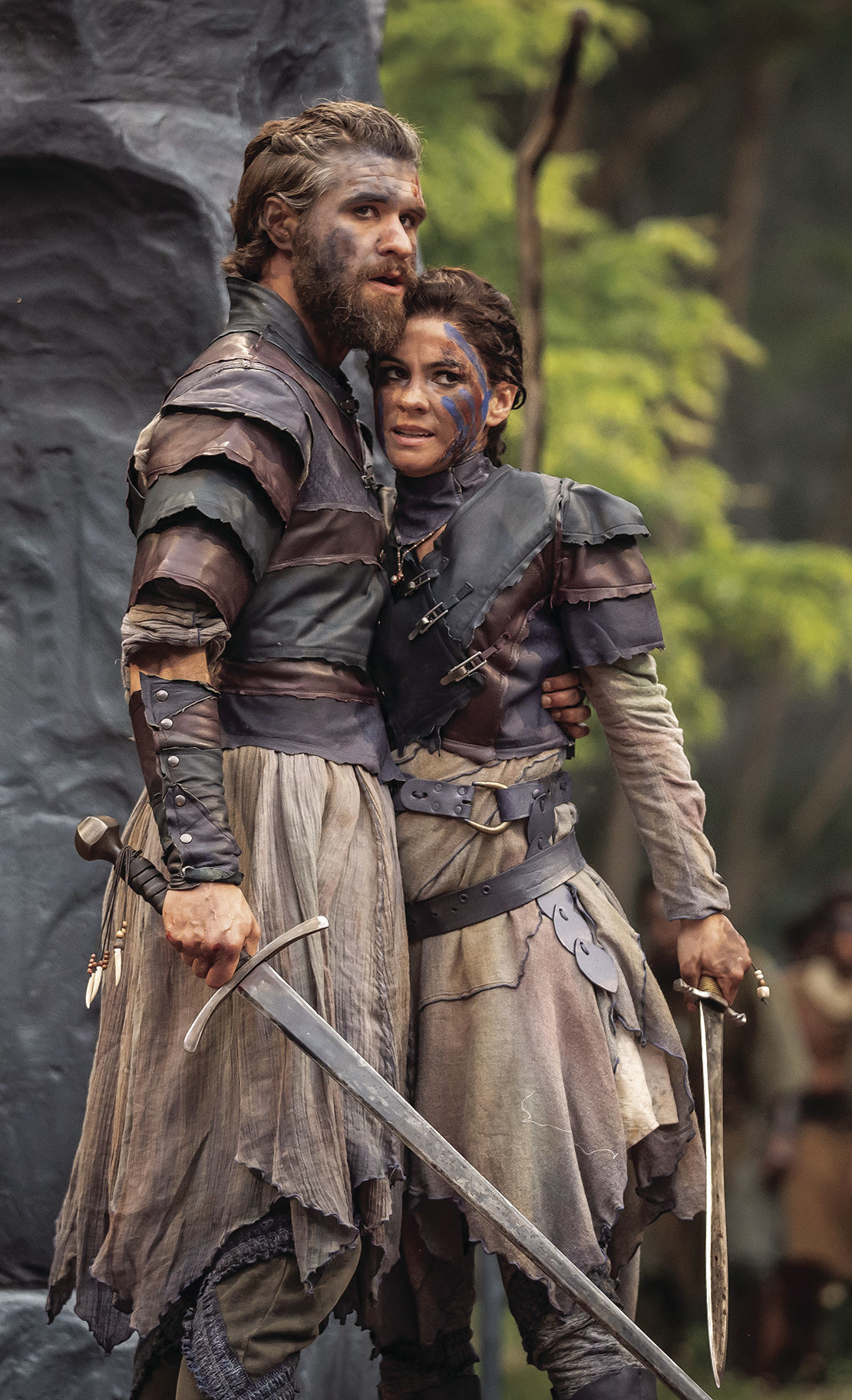 Last summer, Marcus Truschinski, pictured with Melisa Pereyra, was able to perform the title role in William Shakespeare’s “Macbeth” with the American Players Theatre. He said the experience was like coming full circle; while a student at Marshall High School, Truschinski traveled to the outdoor venue in Spring Green as part of a field trip where they watched “Macbeth.” This year marks his 17th season with APT.

Marcus Truschinski performs in the American Players Theatre production of “As You Like It.” Truschinski began his time with APT as an intern immediately after graduating from UW-Whitewater. In 2012, he became a core member of the acting company. 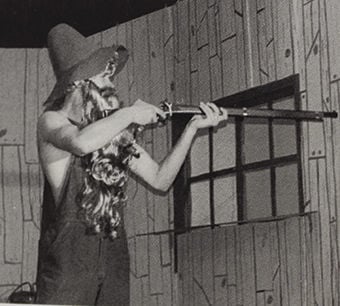 Last summer, Marcus Truschinski, pictured with Melisa Pereyra, was able to perform the title role in William Shakespeare’s “Macbeth” with the American Players Theatre. He said the experience was like coming full circle; while a student at Marshall High School, Truschinski traveled to the outdoor venue in Spring Green as part of a field trip where they watched “Macbeth.” This year marks his 17th season with APT.

Marcus Truschinski performs in the American Players Theatre production of “As You Like It.” Truschinski began his time with APT as an intern immediately after graduating from UW-Whitewater. In 2012, he became a core member of the acting company.

Marcus Truschinski said there’s a picture in his high school yearbook featuring himself and several other boys wearing Marshall High School football jerseys, sitting in the back row at American Player’s Theatre (APT). The group was in Spring Green to see “Macbeth” as part of a school field trip.

Last summer, Truschinski was in the title role of the production at the same location – known for being Wisconsin’s premier outdoor theater venue – where he first watched it.

“It was a big closing of the circle,” said the 39-year-old who marks his 17th season with APT this spring.

Truschinski said when seeing productions at APT, which marked 40 years in 2019, as a student, he admired the venue and the plays it was presenting.

Now, the actor gets to be part of the space and performances he once admired.

Truschinski, who currently lives in Spring Green with his wife and fellow APT actor, Tracy Michelle Arnold, and their 11-year-old son, didn’t anticipate he would be with the company for nearly two decades when he was first hired after graduating from UW-Whitewater.

The actor loved theater and wanted it to be part of his life but the Marshall native originally intended to study history while attending college. After being cast in a play at the end of his freshman year, Truschinski elected to become a theater major.

“It was a major goal of my mentor at college for his actors to work at APT,” the Marshall native said. “He thought it was the best classical theater in the country.”

Truschinski and a friend earned APT internships through the university at the same time.

“It was huge, huge for (our mentor) and for us because we knew it was a big goal of his to get us to work there and we did it immediately right out of college,” the actor said. “I was 21 years old when I found out I was going to be working here and when you’re 21 years old you never think that far into the future.”

Since starting with APT, he’s taken on roles in approximately 45 shows and became a core cast member in 2012. The Marshall native has acted outside of the Spring Green company during its off season and said most of those jobs were the direct result of his career with APT.

Truschinski’s time with the APT has brought him diverse roles. In addition to playing the title role in “Macbeth” during the 2019 season, Truschinski has also taken the APT stage as Edward Luton in “The Circle,” Jim O’Connor in “The Glass Menagerie,” Chris Keller in “All My Sons,” Fitzwilliam Darcy in “Pride and Prejudice,” Biff Loman in “Death of a Salesman,” and Dr. Rank in “A Doll’s House.”

Even with an extensive resume, he has his sights set on a few more characters he’d love to play in the future– Brick in “Cat on a Hot Tin Roof” and the title character in “King Lear.”

The Marshall native’s work in theater has recently expanded from acting to becoming an associate artistic director with Two Crows Theatre Co., which calls the Slowpoke Cabaret & Lounge in downtown Spring Green its home. The production company hosts contemporary plays during the APT off-season.

After being asked to perform during the 2018-2019 inaugural season in one of the Two Crows’ shows, which had a cast comprised of APT actors and local talent, the Marshall native was brought on as an associate artistic director.

During the 2019-2020 season, Two Crows produced four contemporary works, the type APT does not take on during the summer season.

Truschinski said being an associate director has allowed him to see what it takes to put on a show. As an actor, the person is only responsible for their part of the story, he said; as a producer, Truschinski has been able to see the costs associated with having great cast and crew, great sets and great sound.

“It’s about being able to create an atmosphere to create good art,” he said. “You get that much more involved in the creating of it.”

Acting in the time of pandemic

Truschinski was set to play Captain Hook in the Madison Children’s Theater spring production of “Peter Pan.” Instead of the full seven shows it had scheduled, the cast presented the show once on Friday, March 13.

“It was bittersweet,” he said. “I think less for me than for the kids. The show had almost 30 people in it and probably 20-23 were children. … During the final dress rehearsal, the director took us all on stage and told them this would be our final performance of the show.”

The opening – and closing – performance was held in front of just 250 people, comprised of family and friends.

“But, instead of it effecting the play in a negative way, these kids, these wonderful actors, all took it on as ‘Let’s make this the absolute best performance that we possibly could,’” Truschinski said. “It was incredibly moving. Everybody stood in the wings and watched the entire show. That doesn’t really happen but we knew it was this kind of fleeting thing but we also enjoyed it as much as we possibly could.”

The pandemic continued its impact on the Wisconsin arts events from the cancellation of “Peter Pan.” The Two Crows final show of the season, “The Aliens,” was set to have a 10-show run in April. Truschinski had been cast in the role Jasper. However, the play was postponed until the fall; the weekend before rehearsal began, the Safer at Home order was put into place.

Also in April, APT announced it would postpone its season; as of Monday, it had not set a date for when it would reopen. The 2020 season was scheduled to begin June 6.

While unable to take the stage, APT actors decided to switch out their typical venue for their homes to take part in a short film, “Talk to Me/Love in the Time of COVID,” which was produced entirely via videoconferencing technology. It can be viewed online at www.talktomefilm.com.

“It’s impossible to be a theater actor right now because we can’t gather so it was a great creative outlet for us,” Truschinski said.

It was an entire do-it-yourself operation – each of the 10 actors who participated needed to provide their own wardrobe, location and camera.

Arnold plays therapist Sandra, who is meeting with three couples and two individuals through videoconferencing as they adapt to the “new normal” of living during the coronavirus pandemic. In a release, she said: “It was unlike anything I’ve ever done — on film or stage — that much is for sure.”

Truschinski, who plays Fred, whose significant other broke up with him via text, said Zoom is a great tool for conducting meetings and getting to see other people.

“But, it was a big learning curve to how to manipulate Zoom into what we wanted to do,” the actor said. “All of those things that are typically done by brilliant artisans to create, like costumes and sound and music and all of those things. We had to come up with that all on our own. A couple aspects took a little while to learn but eventually it was really, really fun to put together.”

“Talk to Me/Love in the Time of COVID” is more than just an entertaining short; it’s also a call to action to raise money for the APT and Curtain Up Fund, a national fund to help Actors’ Equity members receive some financial assistance while theater productions are postponed or canceled.

“It’s hard to see all my friends who are artists be out of work,” Truschinski said. “They are extraordinarily talented people. And then there are the repercussions of that, the kind of ripple effect of what taking art out of culture does – the restaurants and parking and the businesses that surround the theaters. That’s tough.”