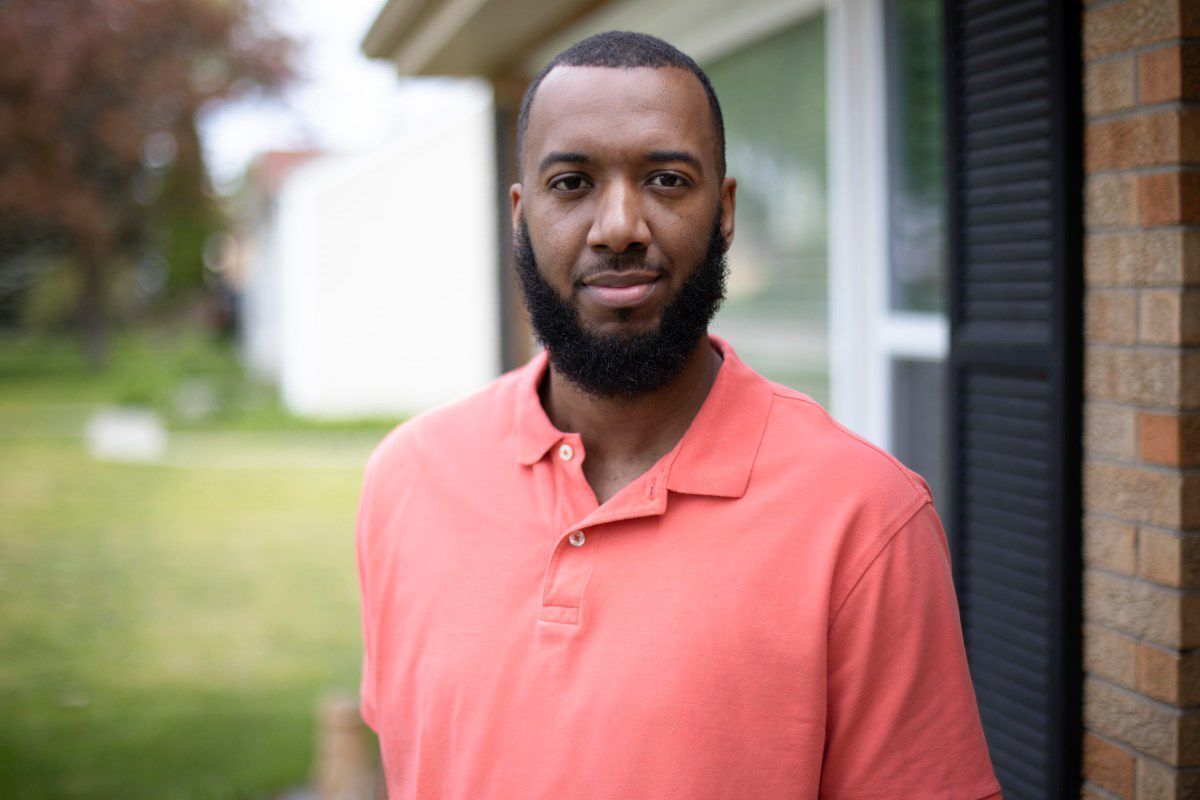 Clint Myrick is seen at his home in Milwaukee on May 10. Myrick graduated from the University of Wisconsin-Milwaukee in 2010 with a student loan debt that has since ballooned to over $150,000. Myrick said he understands why so many students take out loans without necessarily knowing how to pay them back. “They sell you on the dream. ‘Just take out the loans, and you’ll get a job where you’ll be able to pay that stuff back!’ You really believe it,” Myrick says. 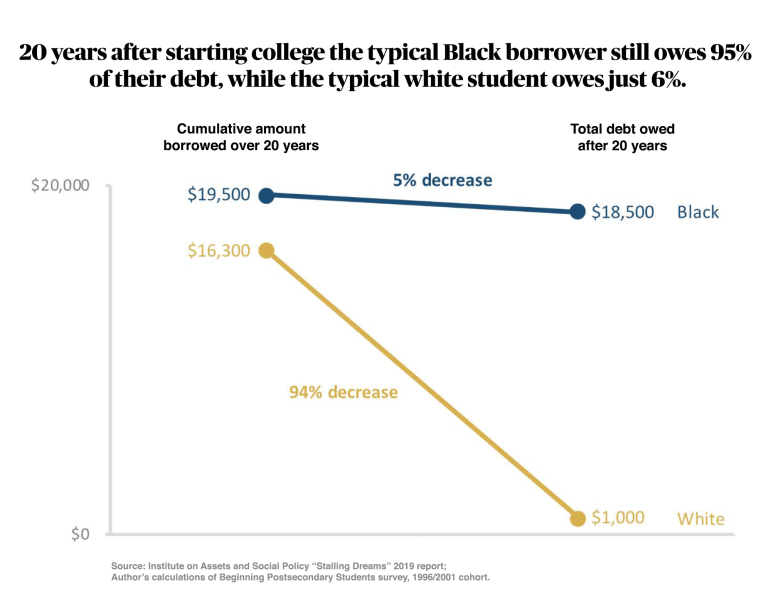 This is an analysis of median cumulative total federal student loans for white and Black student loan borrowers who started college in 1995-96 and amount owed, including principal and interest, 20 years later. 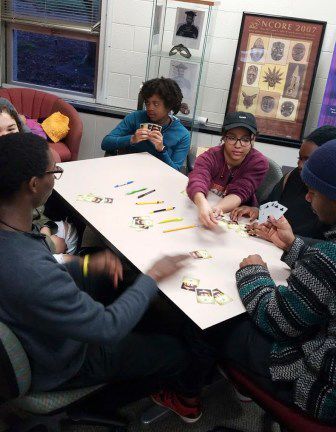 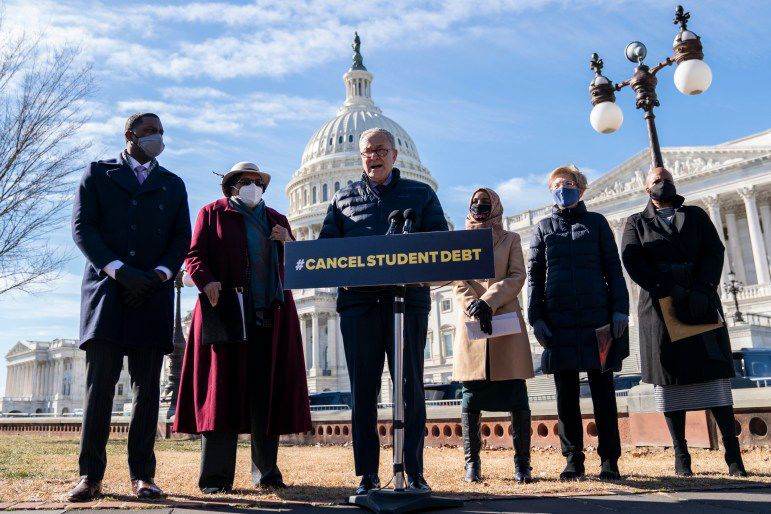 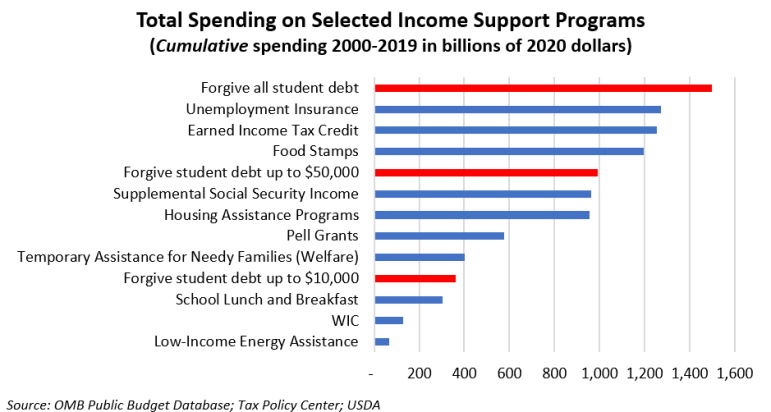 This chart compares the cost of three, one-time student loan forgiveness proposals (shown in red) against cumulative spending on several of the country’s largest transfer programs over the past 20 (shown in blue.)

When Clint Myrick graduated from the University of Wisconsin-Milwaukee in 2010, he left with two consequential pieces of paper: a diploma for a bachelor’s degree in music education — and an eye-popping student loan bill.

The Milwaukee native was one of the first in his family to attend college, and Myrick said he entered with little knowledge of how to pay for it.

“I was totally unprepared,” Myrick said. “I didn’t know how much it cost … I kind of had to figure out everything on my own.”

Myrick held a number of jobs during college to help pay the bills, from working at a flower shop to running a cash register at the UW-Milwaukee student union. He earned about $6 an hour, and student loans allowed him to pay for school.

Over a decade later, Myrick’s student loan debt has only ballooned, even after years of payments. In 2015 he consolidated $118,473 worth of loans, but interest has pushed the debt to $152,039, the highest it has ever been. The husband and father of three works multiple jobs to service the debt. He spends an extra 20 to 30 hours a week as an Uber driver outside of his full-time job for a bank and duties as president for the Milwaukee chapter of the Black fraternity he belonged to in college, Alpha Phi Alpha.

Myrick is not alone in this struggle. In Wisconsin, about 710,000 people owe an estimated $24.4 billion in federal student loan debt, with the median debt at $17,323, according to Gov. Tony Evers’ 2020 task force on student loan debt. Nationally, the toll of crippling levels of student debt on tens of millions of Americans has prompted some calls for wide-ranging loan forgiveness.

That burden weighs on students unevenly. According to EducationData.org, Black and African-American college graduates owe around $25,000 more in student loan debt on average than their white counterparts. The same report also found that four years after graduation, 48% of Black students owe around 12.5% more than they originally borrowed.

Such disparities are particularly stark in the Milwaukee area, according to a 2019 Federal Reserve Bank of New York report. In majority-minority ZIP codes in Milwaukee, Waukesha and West Allis, 23% of the population has student loan debt, compared to 19% of majority white ZIP codes. The real difference comes in the proportion of those loans that are in default. In ZIP codes where most residents are people of color, 21% of the loans are in default, compared to just 6% in majority-white areas.

A variety of studies have named Milwaukee the nation’s most racially segregated metropolitan area, home to structural inequality that makes it tougher for Black residents to bolster their standard of living compared to white residents. A 2020 UW-Milwaukee Center for Economic Development report compared Milwaukee’s Black community to those in the country’s 50 largest metropolitan cities. The report found that Milwaukee’s Black residents fared among the worst nationally regarding income and economic mobility, with many enduring “caste-like conditions” forged by a range of discriminatory policies and practices in government and the private sector.

The study identified a vast gulf between Black and white young people in income and future earning potential, finding that Milwaukee over four decades trailed all but three major metro areas in upward mobility for Black youth. During that same time, Milwaukee saw the 18th best upward mobility for white youths.

“The base of it is racism. Racism is the driving force in the disparities between Black and white people,” Myrick said. “We’re not receiving the same education, the same resources or the same facilities.

During a March online debate for Intelligence Squared U.S. on student loan forgiveness, Ashley Harrington of the Center for Responsible Lending said many Black students are severely burdened by this loan debt. The nonprofit works to protect homeownership and family wealth by opposing abusive financial practices.

“(Student debt) is disproportionately weighing on borrowers of color, Black borrowers in particular, who are more likely to borrow, to borrow more and to struggle in repayment,” said Harrington, federal advocacy director for the group. “That is the direct result of centuries of racially exclusionary policies and practices that continue to this day.”

At Myrick’s alma mater, UW-Milwaukee, many students are racking up crippling debt to lenders.

The 2020 edition of the Integrated Postsecondary Education Data System (IPEDS) found the percentage of UW-Milwaukee students taking out student loans in the 2018-19 school year was 7 percentage points higher than the median of a comparison group of similar institutions. Additionally, UW-Milwaukee students in the same year took out an average of $7,499 a year in student loans — roughly $1,000 more than the median amount.

Myrick said he understands why so many students take out loans without necessarily knowing how to pay them back.

“They sell you on the dream. ‘Just take out the loans, and you’ll get a job where you’ll be able to pay that stuff back!’ You really believe it,” Myrick said.

Loan debt at UW-Milwaukee disproportionately affects Black students in other ways too.

“I’ve seen several students who have had to drop out because they might not have had that last little bit of money for tuition or they might have fallen on hard times,” Pryor said. “They may get their degree but still have $40,000 to $50,000 in student loans to repay. That’s the worst thing — to have that much money to pay back, and you still don’t have that degree.”

“(Black students) tend to rely on student loans more than whites, have higher debt burdens, express more concern about the affordability of loan payments, and are more likely to default,” said Addo, a faculty affiliate at the university’s Institute for Research on Poverty.

To avoid the possibility of piling on more loan debt, many UW-Milwaukee students turn to the university’s financial aid office.

However, the university lags behind similar institutions in regard to financial aid. The same 2020 IPEDS report found 58% of UW-Milwaukee students received grant aid in the 2018-19 school year — far below the comparison group median of 84%. UW-Milwaukee that year offered students roughly half the aid that comparison universities provided.

“(The IPEDS data) doesn’t surprise me. We have a very small amount of institutional, need-based aid that we can give to students,” Opgenorth said. “The campus is aware that they have a ways to go, and they’ve been trying to raise money to address it.”

“The one thing I always preach to them is that I want them to leave here with as little debt as possible,” Pryor said.

Pryor, a 1988 UW-Milwaukee alum, said working a job to help cover college costs was less common when she was in school as it is today.

“I look at these students today. They come in with so many challenges and obstacles,” Pryor said. “... We want to make sure that we provide a space and have resources to make sure those students are equipped with those tools to be successful.”

Pryor said she and other members of the Black Student Cultural Center hope to start by working with the university to establish an emergency grant fund for students.

“I do think if we could get some more scholarship money for our students, that could really close the (racial) gap,” Pryor said. “I think our students would be able to be more successful and would not have to work two or three jobs. They could focus more on their studies, and they might not have to drop out.”

Pryor said that UWM Black Student Cultural Center staff is also doing more outreach to new students, to build trust and relationships prior to the beginning of the semester. “If students have an established relationship and know the staff members earlier, that could alleviate some of those challenges and obstacles,” she said.

‘It would change everything’

Senate Majority Leader Chuck Schumer and Sen. Elizabeth Warren are among those pushing for $50,000 in loan forgiveness for the 43 million Americans who collectively owe more than $1.5 trillion.

“Rich Cordray has spent years fighting on behalf of American families … I’m very glad he will get to apply his fearlessness and expertise to protecting student loan borrowers and bringing much needed accountability to the federal student loan program,” Warren said.

But some are criticizing this push to eliminate debt across the board, worried it would give a break to the wrong people. During the recent online debate, Reason editor-at-large Nick Gillespie said forgiving student loan debt for all would give wealthy families help they don’t need.

“There is no reason on God’s green Earth that wealthy people should not be paying their way. When they take out loans or their kids take out loans, they should pay them back,” Gillespie said.

But Harrington of the Center for Responsible Lending said canceling all student loan debt could be an effective way to address racial gaps in debt and wealth.

“Debt cancellation is absolutely a way to begin to address racial inequities. If you cancel the debt, and it disproportionately impacts Black and brown people, now they have the ability to do other things,” Harrington said. “It will literally move so many families to positive wealth from negative wealth. That is not nothing. That is powerful.”

With no relief yet in sight, Myrick continues to chip away at his six-figure loan debt, which continues to exact a steep toll. The debt kept his family from qualifying for the lowest rate on a home loan, and it has stalled plans to begin investing in real estate.

Myrick said canceling all student debt would transform his family’s life and help address the deep racial disparities in Milwaukee and nationally.

“Some people wouldn’t even have debt if you eliminate those. I’m one of them,” he said. “I wouldn’t have to work a second job if they wiped them clean. I would have more time with the family. Wiping student loans across the board for Black folks … it would change everything.”

This story was produced as part of an investigative reporting class at the University of Wisconsin-Madison School of Journalism and Mass Communication under the direction of Dee J. Hall, Wisconsin Watch’s managing editor, who contributed to this story. The nonprofit Wisconsin Watch (www.WisconsinWatch.org) collaborates with WPR, PBS Wisconsin, other news media and the UW-Madison School of Journalism and Mass Communication.

Here are some resources to manage student loan debt

The Consumer Financial Protection Bureau has a range of resources on student debt, including an online tool to help would-be borrowers compare costs and financial aid options. A CFPB student loan ombudsman handles disputes with private student lenders or with those who service or collect on all types of student loans. You can submit a complaint online.

A U.S. Department of Education student loan ombudsman handles disputes over federal student aid. You can submit information about your problems online or call 877-557-2575.