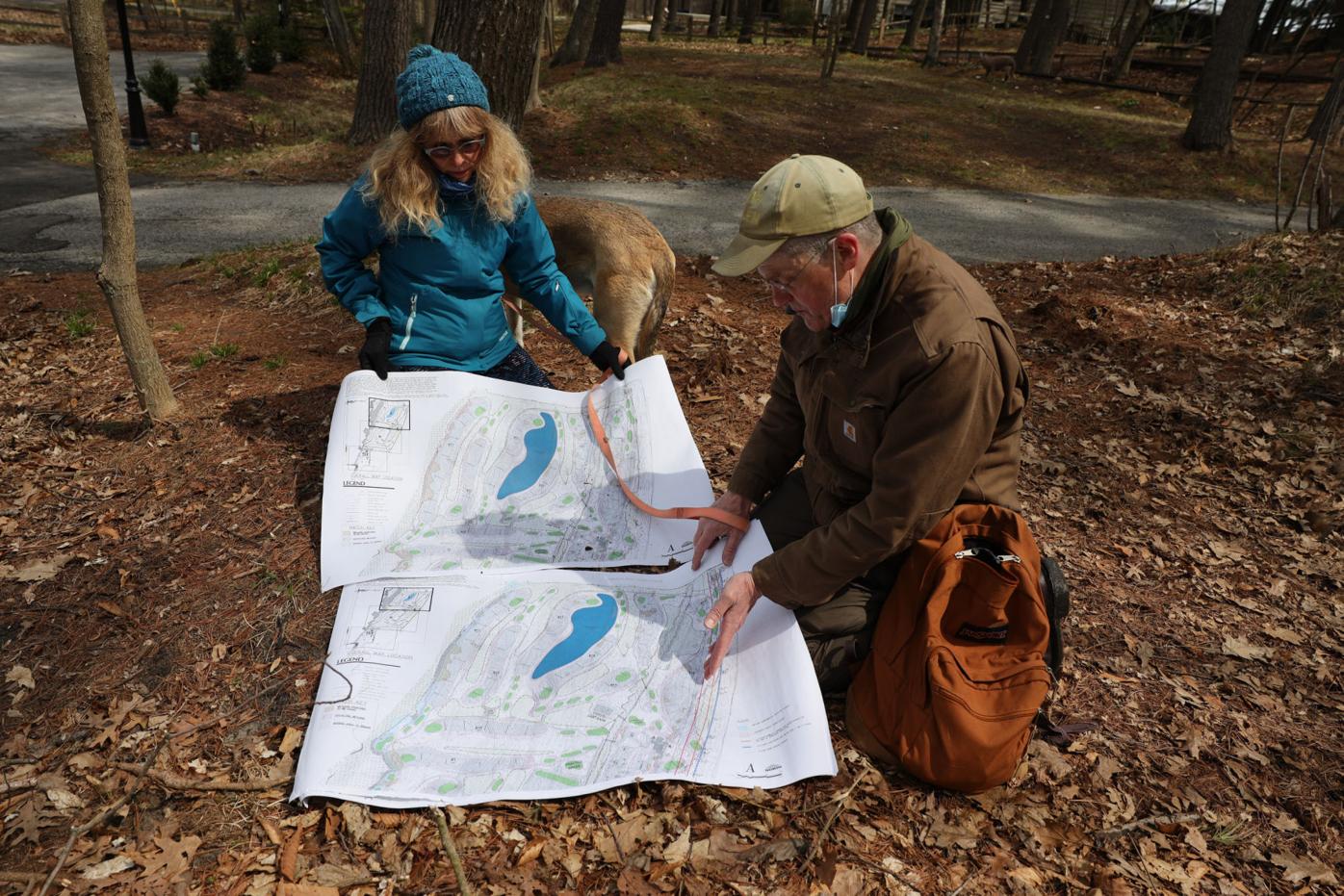 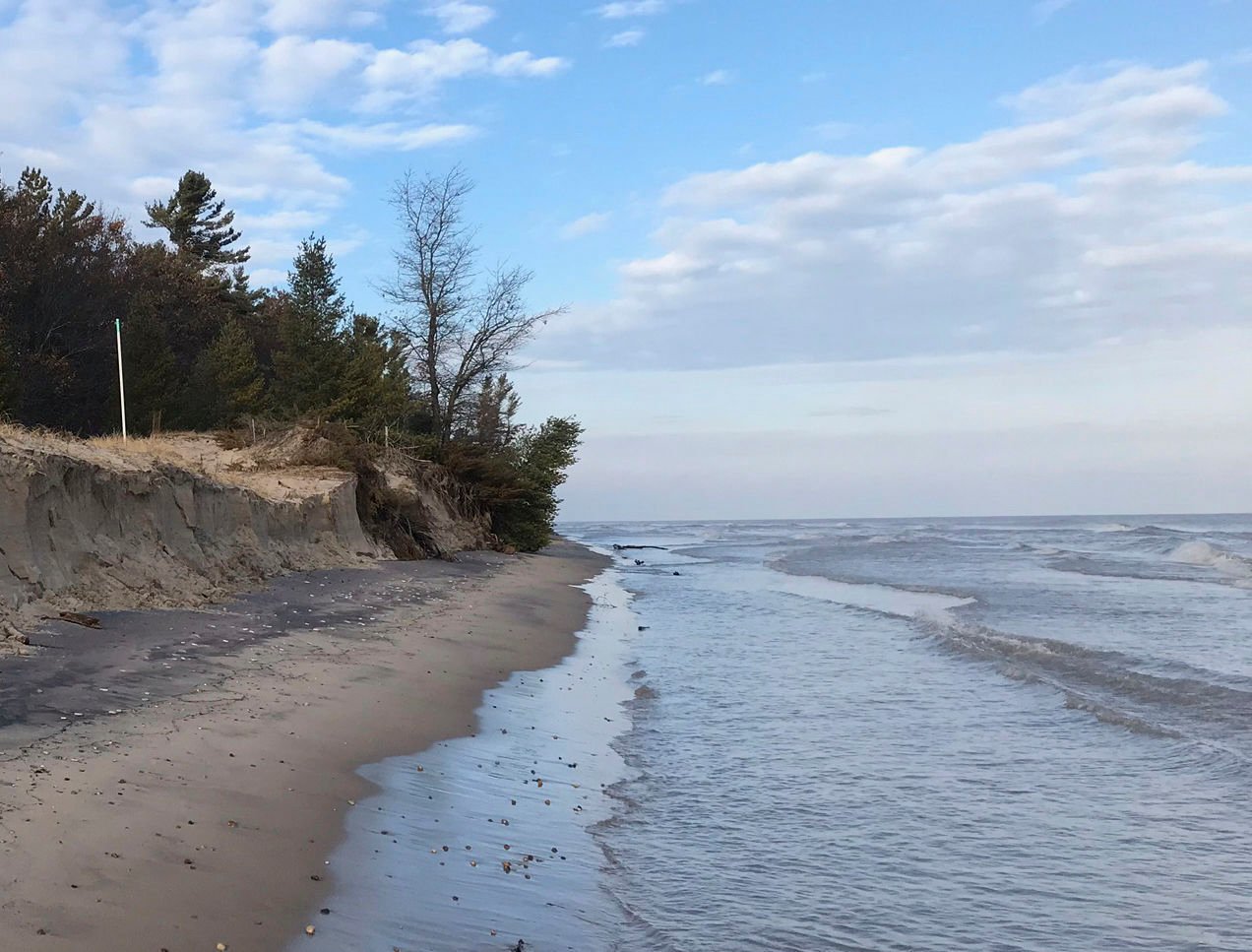 The site where Kohler Co. proposes to put the 18th hole of a high-end golf course is seen in Dec. 2019, in Sheboygan, Wis. Photo documentation shows how Lake Michigan’s shoreline shrank between 2017 and 2019, adding challenges to the golf course plan. The white PVC pipe represents the location of the proposed hole, according to local resident Erik Thelen.

The site where Kohler Co. proposes to put the 18th hole of a high-end golf course is seen in Dec. 2019, in Sheboygan, Wis. Photo documentation shows how Lake Michigan’s shoreline shrank between 2017 and 2019, adding challenges to the golf course plan. The white PVC pipe represents the location of the proposed hole, according to local resident Erik Thelen.

Archeologists have unearthed human remains of Native Americans who lived up to 2,500 years ago during excavations of the Sheboygan County site along Lake Michigan where Kohler Co. envisions a golf course.

A University of Wisconsin-Milwaukee team in 2018 and 2019 inadvertently encountered fragments of human bone and teeth from at least seven locations beneath the privately owned wetlands and forest where Kohler Co. envisions its third championship facility in Wisconsin, according to documents recently obtained by Wisconsin Watch. The disturbance came while recovering tens of thousands of ceramics, tools and other artifacts at the 247-acre site during a study required under federal historic preservation law.

The human remains and most of the artifacts belong to Woodland-era Native Americans who lived between 500 B.C. and 1200 A.D., according to Jennifer Haas, director of UW-Milwaukee Archaeological Research Laboratory Center.

The team did not encounter definable graves that might trigger additional development restrictions under state burial protection law.

Archaeologists did not examine multiple Native American burial mounds on the Kohler Co. property beyond proposed golf course boundaries, Haas said. The 36,000-employee company — which is known for its plumbing fixtures but also manages resorts and golf destinations — vows to protect the mounds and offer public access.

“As you can imagine, there is tremendous cultural sensitivity surrounding the findings of human remains at the site,” she said in an email.

Ho-Chunk Nation historic preservation officer Bill Quackenbush is among tribal representatives monitoring the archeological project. He notes that state and federal laws do not bar development under such circumstances. Still, it leaves him uneasy.

“Tribes are always reluctant to talk about that one ugly aspect — of having to deal with our ancestors being dug up as somewhat of a commodity,” Quackenbush said.

Dirk Willis, vice president for golf, landscape and retail for Kohler Hospitality, said the company remains “committed to creating a world-class golf course that respects the property’s natural character, and opens up private land to the public for the first time.”

“Our public golf course will be an asset to our region,” he said in a statement. “The archeology work on the site represents an important historical opportunity for public education about those who came before us and our state’s rich history that could have remained unknown.”

But barriers to the project remain: Lake Michigan’s fluctuating water levels and winds have eroded key portions of the site, and pending lawsuits are delaying construction.

The grassroots group Friends of the Black River Forest is challenging approvals under former Gov. Scott Walker. Those include a Wisconsin Department of Natural Resources permit to fill 1.5 acres of rare wetlands and a deal in which Wisconsin swapped 6.5 acres of Kohler-Andrae State Park for 9.5 acres of Kohler property with a house and several storage buildings.

Meanwhile, the archeological work illustrates the challenges of balancing cultural sensitivities, historic preservation and property rights in Wisconsin, where most of more than 2,600 known Native American burial mounds and 9,000-plus known burial sites sit on privately owned land.

Wisconsin is home to the most burial sites in North America, according to the DNR. The state in recent years bolstered protections for these sites, largely as awareness spread of the wide-scale destruction of the estimated 20,000 to 30,000 earthen burial mounds that Native Americans built before Europeans arrived.

Belle Ragins, a UW-Milwaukee professor of management who lives near the Kohler Co. site and opposes the golf course, shared the emails with Wisconsin Watch. She and her husband, Erik Thelen, received them through a Freedom of Information Act request to the Army Corps of Engineers, which is evaluating Kohler Co.’s application to discharge materials into 3.7 acres of federal wetlands.

Ragins said she was surprised to learn Kohler was forging ahead even after archeologists identified a group of burial mounds and an initial cache of Native American artifacts several years ago.

“It’s just heartbreaking, because they would never do this if it was their grandmother’s cemetery,” Ragins said.

Remains ‘must be treated with the utmost dignity’

The Kohler Co. site is eligible for the National Register of Historic Places, and the company funded the archeological work to address the project’s “adverse effect” on the historic location — a federal requirement before the Army Corps issues its permit.

Kohler Co. must eventually present a plan to educate the public about how Native Americans and others long ago lived and worked at the site. Any human remains disturbed during the process “must be treated with the utmost dignity and respect,” according to an agreement between Kohler Co. and state, federal and tribal agencies.

The dispute escalated in July 2019 when a Wisconsin Historical Society official emailed a notice that the UW-Milwaukee team encountered an adult molar tooth.

“This is another part of one of our ancestor’s human remains that was found at this site,” replied David Grignon, a historic preservation officer for the Menominee Indian Tribe of Wisconsin. “... Did the project stop or is it going to continue or does the Kohler Company have too much influence to stop it?”

Leslie Eisenberg, a compliance archeologist with the Wisconsin Historical Society’s State Historic Preservation Office, responded that Kohler Co. had clear authority to request to disturb the “uncatalogued” burial site, and her office granted that permission. The tooth couldn’t be left in place because archaeologists found it in a sifting screen rather than directly on site, she wrote.

“I recently reminded everyone working on this project that if human bone is found during the remainder of the excavation, it should not be moved until every effort is made to avoid, if possible,” she wrote.

The next day, Quackenbush asked to halt the excavation to discuss broader concerns.

“I strongly feel little cultural sensitivity has been given to us tribes … no one seems to take into account these remains are being pulled from the ground against our continued requests not to do so,” Quackenbush wrote in an email.

Speaking to Wisconsin Watch, Quackenbush said differing cultural perceptions can create tension: Archeologists and agency officials seem to view them as items to be analyzed, while tribal officials see them as ancestors who need a swift return to their resting place. It’s not unique to the Kohler excavation, he said.

“We’re so tired of people analyzing and reanalyzing and trying to make something of use out of our ancestors,” he said. “It’s at a point where we just jump into consultation and try to create an (agreement) to expedite the process.”

The complaint about the Kohler excavation reached university leaders. The UW System and the Board of Regents arranged a conversation between Quakenbush and UW-Milwaukee Chancellor Mark Mone, email correspondence shows.

Days later, university staff promised to place tobacco with all recovered human remains, wrap them in white cloth and hold them in secure storage pending reburial — while expediting that portion of the analysis.

Ho-Chunk, Menominee and Potawatomi representatives ultimately reburied the remains nearby in summer 2020. The reburial and additional assurances satisfied the participating tribes, Quackenbush said in an interview. But it was a lesson that state and federal law sometimes falls short in protecting cultural dignity.

“I think protection of human remains and burial on site is a higher priority than the creation of a golf course, for example. But, that said, (the Kohlers) are landowners, and they have the right to do as they see fit,” he said.

Haas’ team is still inventorying and analyzing roughly 38,000 historic and 214,000 prehistoric artifacts. It won’t file a draft report until spring 2023, Haas said, which the Wisconsin Historical Society must approve.

That’s just one hurdle Kohler Co. must clear to fulfill its vision.

In the 1930s, the company purchased 468 acres of land along Lake Michigan and donated nearly half to what is now the Kohler-Andrae State Park. The rest is now slated for the golf course.

Kohler Co. worked with Sheboygan officials to annex the land after key officials in the town of Wilson, the original jurisdiction, openly opposed the project. The annexation sparked a legal battle, which the Wisconsin Supreme Court in 2020 sided with Kohler Co. Months later, the Sheboygan Plan Commission granted the company a conditional use permit.

To build the course, Kohler Co. says it must destroy nearly 4 acres of wetlands. The company plans to cut down half of the trees on the property, create an irrigation pond, golf cart paths, a clubhouse, maintenance building and an entry road.

Kohler Co. vows remediation through programs that allow it to sponsor the restoration or creation of wetlands elsewhere.

But some scientists say the development will permanently alter ecosystems across the rare landscape. And one former DNR wetland ecologist told Wisconsin Watch in 2018 that DNR managers pressured staff to approve a deficient wetlands permit application.

An administrative law judge revoked the permit in 2019; Kohler Co. appealed, and the case remains in Sheboygan County Circuit Court.

Kohler Co. faces yet another challenge: the eroding Lake Michigan shore, which could leave part of the course under water unless designs change.

Any redesign would likely require the company to return to Sheboygan’s Plan Commission, although the exact process would depend on the specificics, according to Chad Pelishek, the city’s planning and development director.