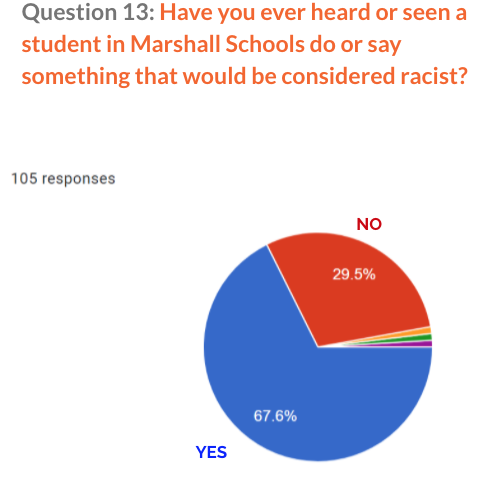 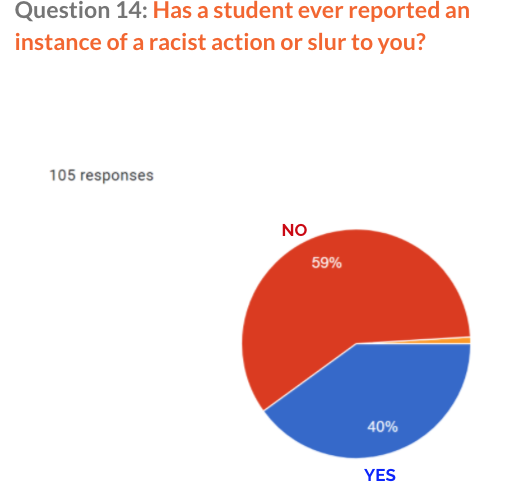 The results of a survey created by members of the Marshall School District racial justice committee show approximately 68% of the 105 staff respondents reported to hearing or seeing a students in Marshall schools do or say something that could be considered racist.

This was just one piece of information shared with the Marshall School Board at its June 16 meeting.

Approximately one year ago, a petition called “Demand Marshall Public Schools Create an Action Plan to Support Black and brown students” was started on change.org. It listed six demands of the district: representation across all levels of MPS staff, mandatory anti-racism training and education, mental health resources for Black and students of color, diversification of education, remove resource officers / police from schools and sporting events, and follow through on the commitment the district already made in regard to a statement condemning racism.

The statement referenced in the petition was released by the district on June 4, 2020 in response to the death of George Floyd, whose death lead to outcry and protests across the country. The statement, issued by the district and school board, read: “These acts of racial bias and violence are deeply troubling, and we must stand together to condemn the systemic racism that enables such tragedies to occur. … The Marshall Community does not stand for racial intolerance, and we must continue to work together to provide a safe, inclusive environment for all.”

In response to the petition, the district created a racial justice committee composed of district staff members and community members.

According to middle school social studies teacher and group member Claire Lewandowski, the cohort created the survey as a way to gauge information on the following topics: staff members’ experiences with racism at Marshall, staff’s pre-existing knowledge of how to address racism in a school setting, and staff’s interest in growing professionally in these areas. Of the 105 completed 29-question surveys, 60% of the respondents were classroom teachers.

During the presentation to the school board, middle school physical education teacher and committee member Laura McCarty said it was unfortunate to see the number of staff members who had seen or heard students partake in a behavior or say something that could be seen as racist.

She noted it was also unfortunate to see 40% of the respondents say a student had reported a racist action or slur to them. In those instances, approximately half of the staff members who participated in the survey answered ‘yes’ or ‘maybe’ as to whether they felt they appropriately intervened; however, about 47% said ‘yes’ or ‘maybe’ to wishing they had done something different when having to intervene in those types of situations.

Following the meeting, Lewandowski, speaking for herself and not on behalf of the committee, said she was not surprised to see the number of staff who had seen or heard racial incidents.

“School is a place where students (and staff) are working out how to treat each other, how to live together. Our society as a whole struggles with racism and power dynamics, so it makes sense that racist actions would show up in our schools as part of this learning process,” she said. “It doesn’t mean that our students are ‘bad.’ It means that we have a positive opportunity as a school community to learn together how to respond when racism shows up.”

While the results of the survey showed staff have seen or heard racist incidents occur, the majority are interested in attending training to learn how to intervene if they hear or witness racist speech and actions with 70.5% affirming they would like to attend this type of training and 21% saying maybe. Approximately 7.6% said they would not be interested.

According to the survey, 71% would like to learn intervention techniques and 67% would like to have additional training or support in conversations around equity or race.

“That is good news that we want to grow in this area,” said middle school science teacher and group member Kellie Kubiak.

According to the group, the survey results have not come as a complete shock to its members. It said between the survey comments and feedback from the district administration and school board, the main feeling is that all parties are aware racism shows up in the school system. Now, the committee along with administration and the school board needs to learn more about how it can be addressed.

Board member Eric Armstrong appreciated the group reaching out to staff on this topic and the district now needs to translate this information into action items.

The committee suggested the board re-evaluate policies through an anti-racist lens and remove or amend existing policies that may be disproportionally harmful. Superintendent Dan Grady said administration has reached out to the Wisconsin Association of School Boards to look at possible changes to policies

The group believes it could also look at working with outside consultants to help guide the district to become more anti-racist.

“I’m very excited for our racial justice and diversity team to have time set aside next year as we partner again with the Dane County equity consortium,” the superintendent said. “We’re one of 26 districts that are working closely with them.”

The racial justice committee plans to create a similar survey to be completed by students in the early part of the 2021-2022 school year.

Additionally, the committee recently has reached out to other local school districts conducting the same type of work to see if partnerships can be formed, specifically relating to district policies addressing hate speech; is working on forming a student group to address the issues; and researching outside organizations to partner with to offer professional development for staff.

“Our group is interested in making Marshall Public Schools an even better place to learn, for all students and staff. Any community member is welcome to join us and learn more about what we’re working on — feel free to reach out and get involved,” said Lewandowski, speaking for herself. “It’s a long road with a lot of work ahead and there is room for everyone to be a part of the journey.”

Other takeaways from the survey

Other takeaways from the survey:

• When teachers who took the survey were asked if they felt their current curriculum was anti-racist, 23.7% responded yes, 33.3% responded somewhat, 29% responded they didn’t know, and 14% responded no.

• When teachers who took the survey were asked if they had ever evaluated their curriculum through an anti-racist lens, 54.8% responded no, 20.4% responded yes and 18.3% responded not applicable.

• On a scale from 1 to 5 with 1 being no idea and 5 being absolutely yes, when teachers who took the survey were asked if they had a sense of how to amend their curriculum to be more anti-racist, 31 answered 1 or 2, 55 answered with 3 or 4, and 4 answered with 5.