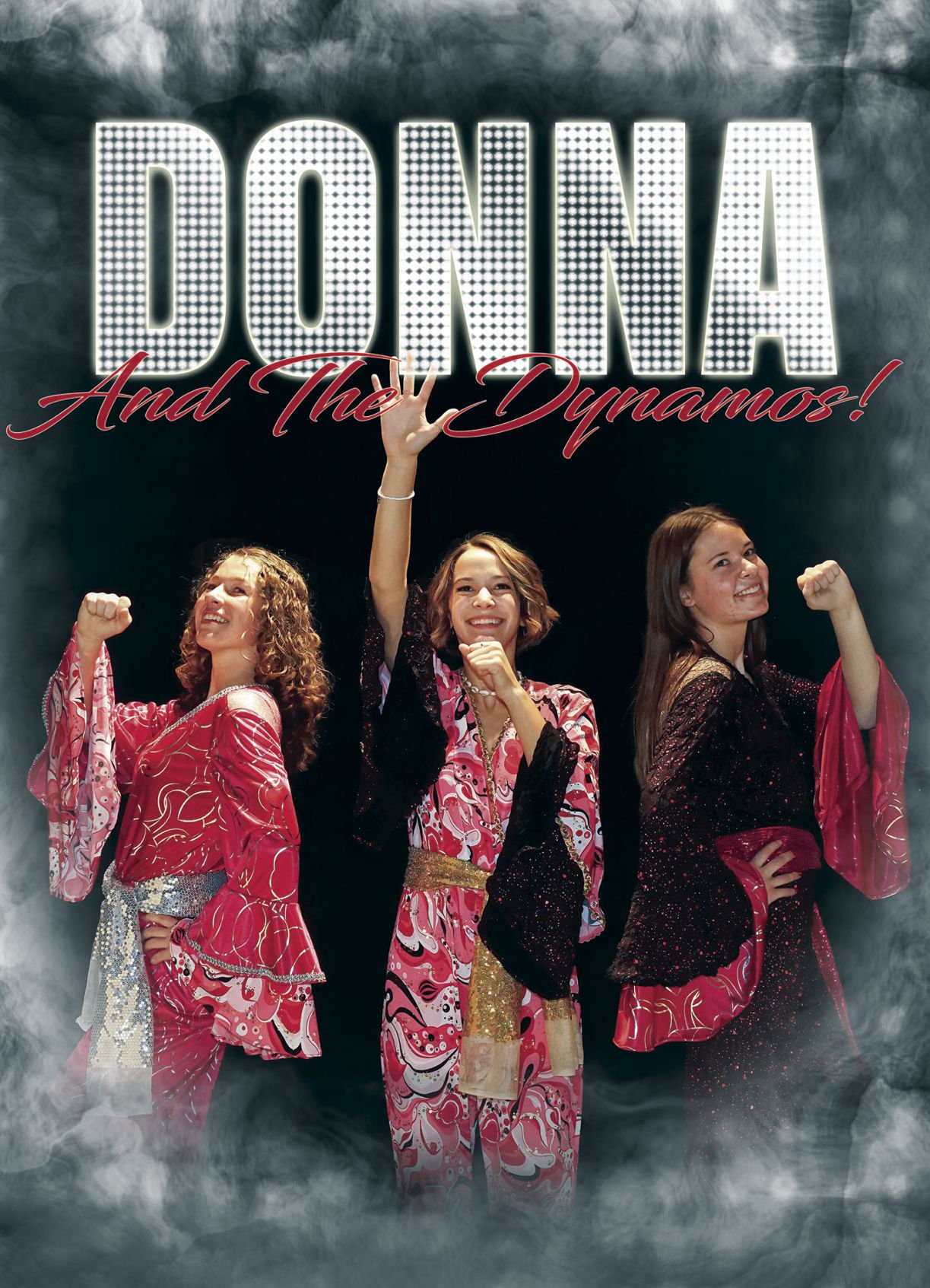 Aubrey Kappes, center, plays Donna in Marshall High School’s production of “Mamma Mia.” The popular musical will be performed Friday, Saturday and Sunday. Pictured with Kappes is Aubrey Schlimgen, left, as Tanya and Trinity Flint as Rosie as they perform ABBA songs as Donna and the Dynamos. 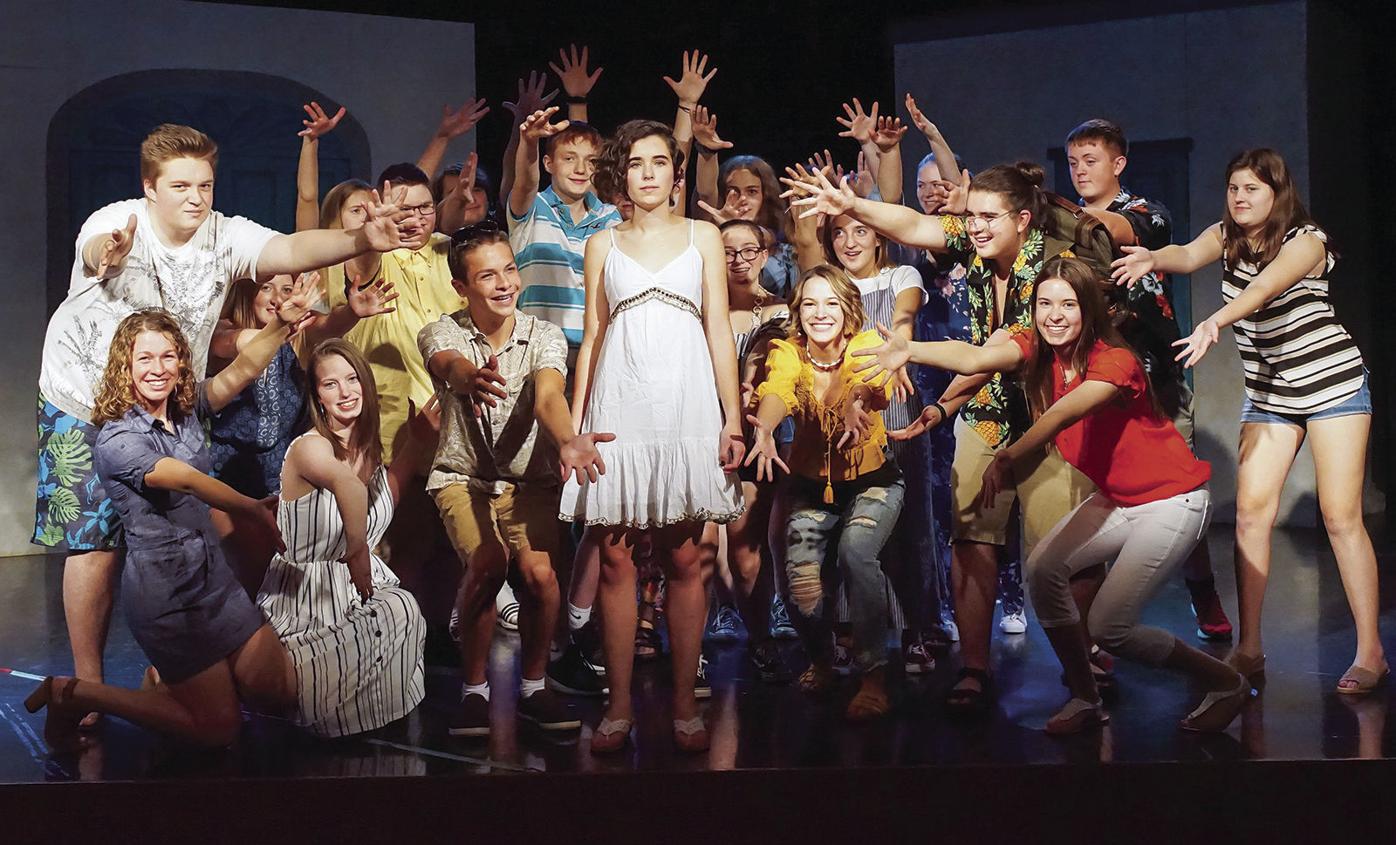 Twenty-three Marshall High School students were cast in the musical “Mamma Mia.” The public is invited to see the show Friday, Saturday and Sunday. Tickets can be purchased online at www.showtix4u.com or at the door.

Aubrey Kappes, center, plays Donna in Marshall High School’s production of “Mamma Mia.” The popular musical will be performed Friday, Saturday and Sunday. Pictured with Kappes is Aubrey Schlimgen, left, as Tanya and Trinity Flint as Rosie as they perform ABBA songs as Donna and the Dynamos.

Twenty-three Marshall High School students were cast in the musical “Mamma Mia.” The public is invited to see the show Friday, Saturday and Sunday. Tickets can be purchased online at www.showtix4u.com or at the door.

Audience members may feel the urge to dance and jive – or at least sing along – when Marshall High School brings the popular musical “Mamma Mia” to the stage. Featuring the songs of Swedish quartet ABBA, it’s the story of a young bride-to-be trying to determine who among three men is her father the day before she takes her vows.

Musical director and high school vocal music teacher Gina Jorgenson said this is the first year the musical, which was later made into a feature film, is available for high schools to perform.

“I thought it would be so much fun to do this show,” she said, adding selected musicals need to fit with the students who participate, so shows with fewer male roles are often more appealing.

Auditions and casting for the show occurred in the spring, allowing the students more time to learn the material and be prepared for the first rehearsals in August.

Students found the musical to be quite accessible. Unlike other shows, it was easy to find a production of the show since “Mamma Mia” was released as a film in 2008. Additionally, Jorgenson showed the movie to her choir classes at the end of the 2018-2019 school year.

“We had kids come in knowing every single song already,” she said.

A bit of the language was toned down to make the Marshall High School show more appropriate for younger audience members.

“That was a bit of a challenge – we wanted to keep the show’s integrity but make it more on the PG side,” Jorgenson said.

Since the location of the show is a Greek island, the students were able to wear their own summer clothing. However, when it comes to a musical number by Donna and her two friends, three 70s-inspired costumes were made by Marshall High School family and consumer science teacher Sabrina Kliewer, who also serves as the show’s assistant director.

Seniors Aubrie Kappes and Katelyn Petersen take on the roles of Donna and her soon-to-be-married daughter Sophie, respectively among the 23 cast members.

Kappes, who had been in previous Marshall High School productions, planned to audition for the show no matter what musical was selected. The senior was really excited to learn the school would be performing “Mamma Mia” – especially for the 70s-style outfit her character gets to wear.

“’Mamma Mia’ is like a staple movie in our family – everybody loves it – so I was really excited we were going to do it,” Petersen said.

Even before seeing the movie version, Petersen was familiar with the music after hearing the original Broadway soundtrack.

Kappes was familiar with a bit of the music before seeing the film, but got more into the songs of ABBA once discovering the school would be performing the show.

Both girls are trying to have as much fun as possible in their final show at Marshall High School.

“Mamma Mia” will mark the first time the school will participate in the Jerry Awards program, which recognizes excellence in high school theater. A trio of judges will critique the show and then put forth any nominations in categories the show excelled in.

Jorgenson has known about the program for several years and decided to enter into the competition since the cast had the opportunity to learn the musical beginning in June.

“I thought this would give us a little bit of push to have a really fun show and I just thought it would be a good experience for the kids to … go to the Jerry Awards and see what other kids in other schools do,” she said.

Tickets: purchase online at www.showtix4u.com or at the door. Prices are $8 for adults, $7 for senior citizens and $5 for students. There is a $1 per ticket fee and an additional $1 per order fee for online purchases.