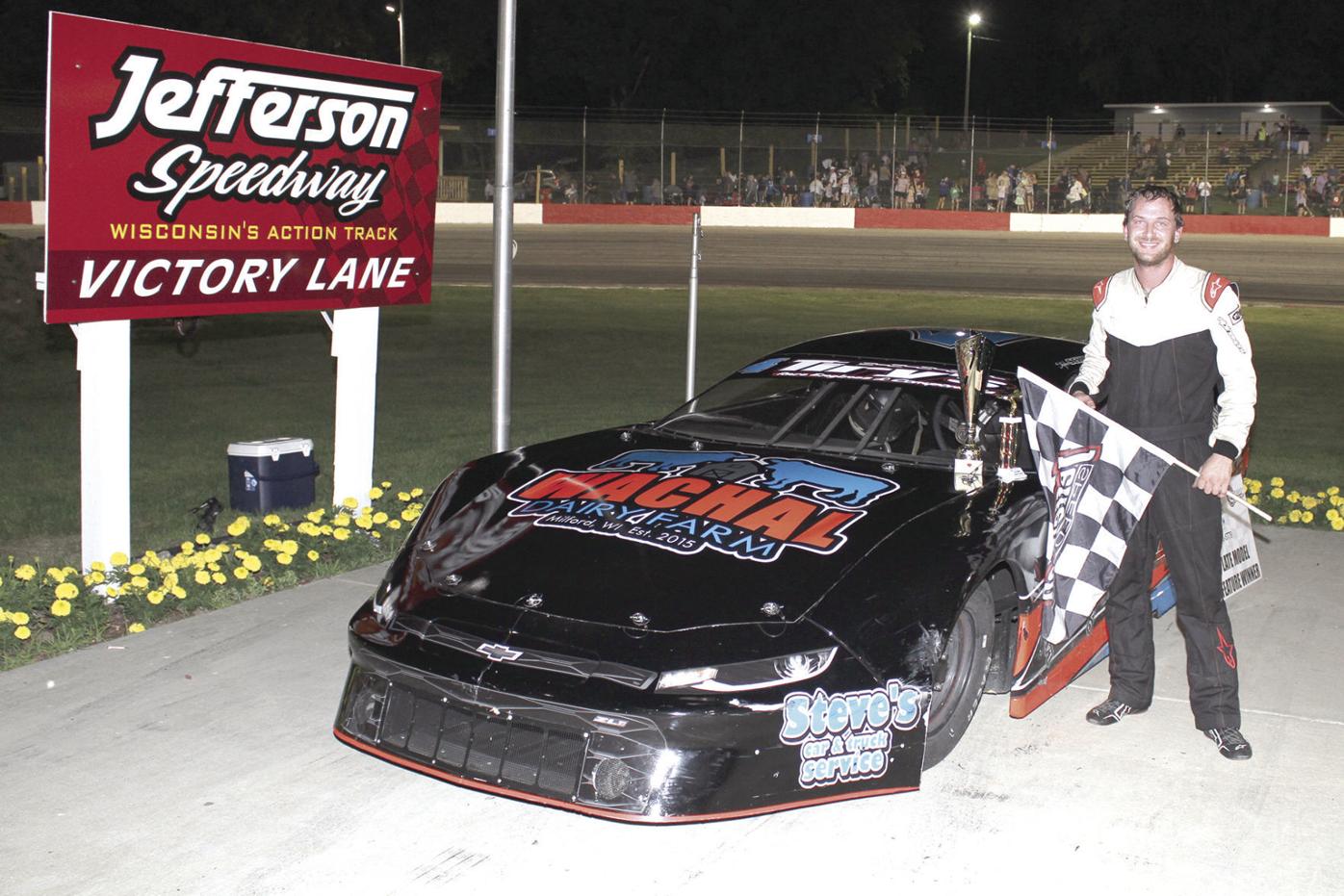 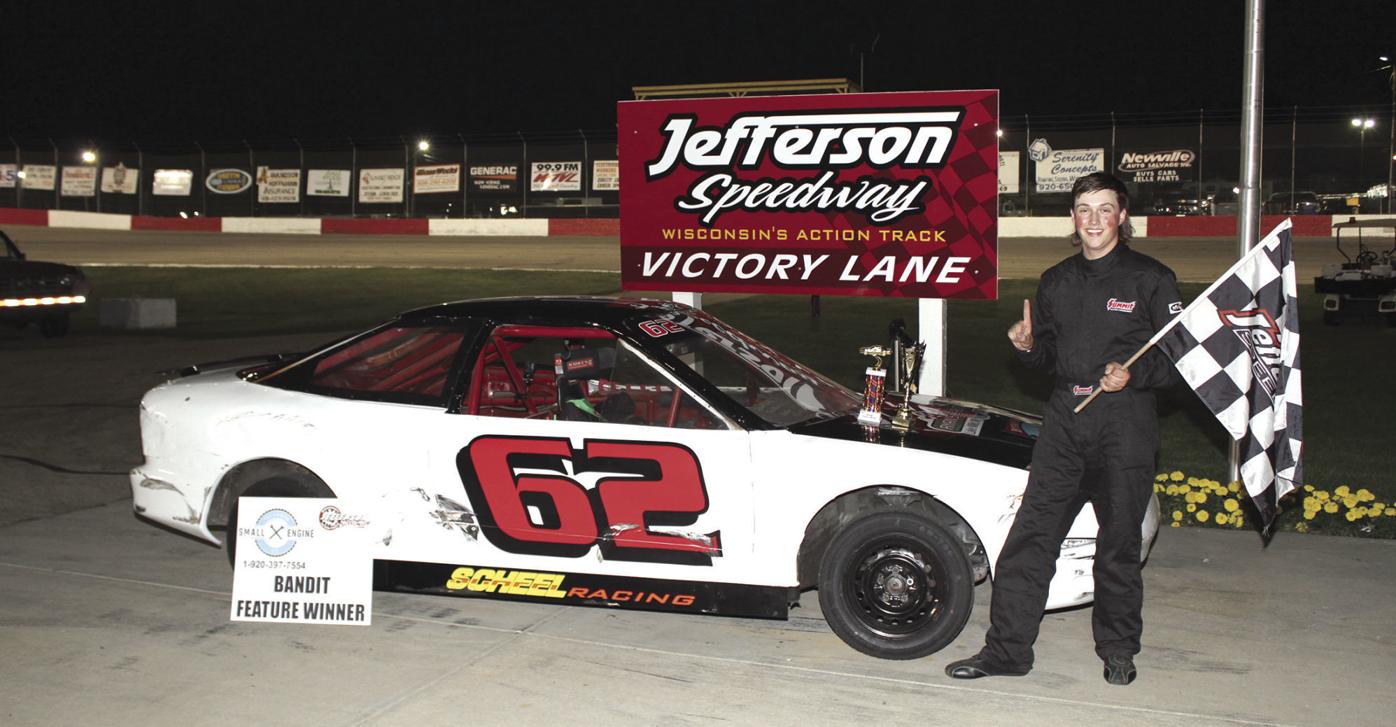 Rookie drivers Laney Osborne and Ryan Weyer paced the field to green as they battled side by side for control. It was Weyer who was able to take the lead. On lap eight, Stephen Scheel would battle side by side with Weyer and Scheel would come out in the lead on lap nine. Three laps later, on lap twelve, the first of three cautions flew for the scuffle between Seth Reamer and Jason Erickson. Both would be sent to the tail for the restart. Both Scheel brothers would restart at the front of the field, with Dylan Schulyer and Weyer behind them. St.Scheel would take the lead and two laps later Osborne would bring out the second caution spinning on her own. Stephen would restart the race with Schulyer on the outside and his brother, Shaun Scheel behind him. While the battle for the lead was happening the action was three wide for seventh between Dale Nottestad, Kolton Guralski and Kyle Smith. Nottestad came out on top. For Nottestad, the battle continued as he took his time getting to the top five. The final caution would happen on lap twenty-two for Ed Kubicz spinning. Again St. Scheel and Schulyer would race to the green. St. Scheel continued to keep his lead. Nottestad would continue to fight for each position he battled side by side with Sh. Scheel on lap twenty-nine he over took him getting himself to third. Erickson having to restart last on lap 12 had his work cut out for him to get his top five finish. He moved through the field lap by lap to finish fourth. St.Scheel took first followed by Schuyler, Nottestad, Erickson and Ryan Goldade rounding out the five.

“The Reverend” Jim Taylor captured the checker flag in the Serenity Concepts sportsman feature! Starting P4, he easily passed for P2 on the second lap. On lap 13, Tyler Deporter and Bobby Selsing Jr. tangled up to bring out the only caution of the race. Adam Schook and Taylor restarted on the front row with Titus Hegestad right behind them. Helgestad took Schook and Taylor three wide on lap 15 giving Taylor the advantage for the lead, where he led the rest of the race. Finishing in the top five, Taylor, Helgestad, Jason Thoma, Robert Hansberry, Mark Deporter.

Dillon Schwanbeck scores the win in the 20 lap Legends Direct Legends feature event after the disqualification of James Lynch. Logan Taylor and Mike Storkson paced the start, with Taylor taking the lead on lap one, Storkson wasn’t going to have that and took the lead on lap 2. He stayed there for six laps. Schwanbeck was fast on his tail and took over leading on lap eight. Two quick laps later, the first of two cautions came out for the tangled Michael Guderski and Adam Powers. The caution resulted in to Schwanbeck and Aaron Moyer at the front as they raced back to green. A few laps later on lap sixteen, the second caution would come out for Kenny Storkson and Michael Weber. Again Schwanbeck would start up front, this time with Lynch. Lynch would take over the lead on lap twenty-one and finish in first. After tech, Lynch and Danny Lehmkuhl would be disqualified giving Schwanbeck the win. In second, Moyer, followed by Powers, Robbie Morrison and M. Storkson.

First time feature winner, Jon Benninger took the win for the Benninger Concrete Construction 25 lap Hobby Stock feature event. Mike Bollinger and Benninger paced the field and battled back and forth for the first six laps side by side, Bollinger would lead the first three laps, on lap four, Benninger would lead and then Bollinger would lead again for two more laps. Finally on lap seven, Benninger took the lead where he would remain the rest of the race. On lap thirteen there was an “almost” caution when Jordy Egli would become squirrely in the middle of turns one and two, having multiple cars bang off of each other, everyone made it out of turn two but J. Egli. She was able to keep her car out of harms way in the infield. This helped keep Benninger from having to fight off the others as his lead expanded and the battle behind him continued for the top five. Finishing in second to Benninger was Robbie Rucks, followed by Scott Riedner, Jared Vike, and Bollinger.

Ethan Degner of Watertown, captured the Fort Atkinson Small Engine 20 lap Bandit feature. Degner started on the pole and led all 20 laps. On lap 18 the only caution flew as Ashlynn Jarlsberg got into Gaven Smothers. Degner and Nick Newton were able to restart with Degner keeping his lead to win. At the checkers, it was Degner out front for the win. Newton was second followed by Ryan Oetzel, Matt Krinke and Mason Wilcott rounding out the top five.